Well, I didn’t make any progress on our bedroom this week.

A couple of months ago, I did take a step forward though. Mike had been frustrated with his clothes storage and asked me to help him. This was a struggle for me because I felt like it was his clothes and he should know what how he wants them. Besides, I had attempted helping him to organize his clothes before  but within a few months he was back in frustration and it looked like I had never organized it at all. 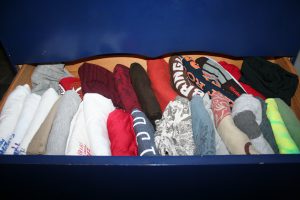 So this time when he asked for help, I made the decision to continue helping him. Thus I decided to just start small. To begin, I emptied one drawer of his chest of drawers and proceeded to round up as many of his t-shirts and such that I could find. I managed to get 52 shirts in this drawer and he still had shirts hanging out somewhere else!

I had seen the KonMari method online and folded his shirts this way, as much as I could remember. (As it turns out, I didn’t really do it that way but similarly because done right, they should stand on their own but I needed space and just squeezed them all in.)

I had determined to keep on top of these, folding them appropriately and putting them in the drawer for him, as they are washed. But one day, I was putting away freshly laundered shirts and was amazed to find the drawer only half full. I wondered where the rest of them went because the laundry was all caught up. It is still a mystery as to where he has ‘misplaced’ them. As you can see, I have found a few more, since the drawer is more than half full currently.

At any rate, it has really blessed him that I fold and reinsert the shirts into the drawer for him and it hasn’t been much of an inconvenience for me at all. Yes, I do have to fold his shirts on a flat surface instead of my usual method and then I do take a few seconds to put his shirts in the drawer but it doesn’t take much longer at all. And it is soooo worth it for him to be less frustrated.

So, although I didn’t gain any more ground in my bedroom decluttering challenge, I did keep up the one thing I did get done. And that is good!

But I do plan to make much more progress this week.