We celebrated Michael’s birthday this week. He is looking good in his new clothes we got him. 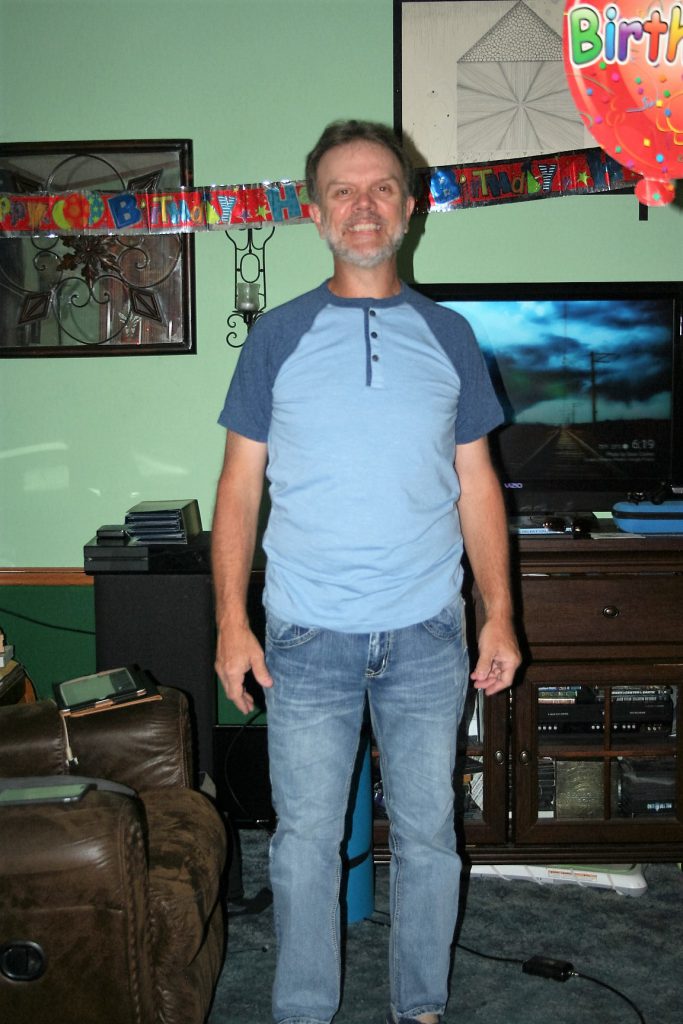 I’m sooo proud of him. He has really slimmed down on Trim Healthy Mama.

I made him a THM Carrot Cake. It was pretty good but I cooked it a little bit too long so I thought it was a little dry but everyone loved it. Here is the only picture of I got of it, unfortunately you cannot see much of the cake (and Sean is the one who took this, as I handed the camera to him before brought out the cake). 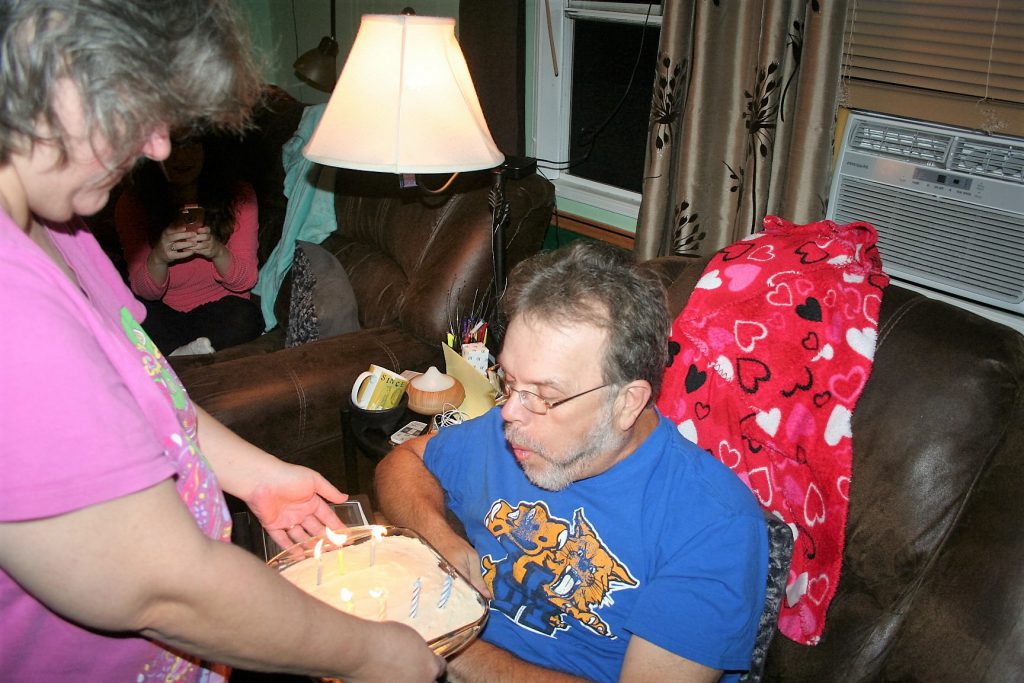 One day this week Tiffany and I went Christmas list shopping. We went to Ross and found some outerwear she loved. Unfortunately the thing about Ross and stores like it is that if you don’t buy it now, you may not get it.

I found this poncho-ish top that felt so good and handed it to Tiffany. At first she just laughed but I convinced her to try it on anyway.

She decided she loved it and had to have it! In spite of how funny it looks. 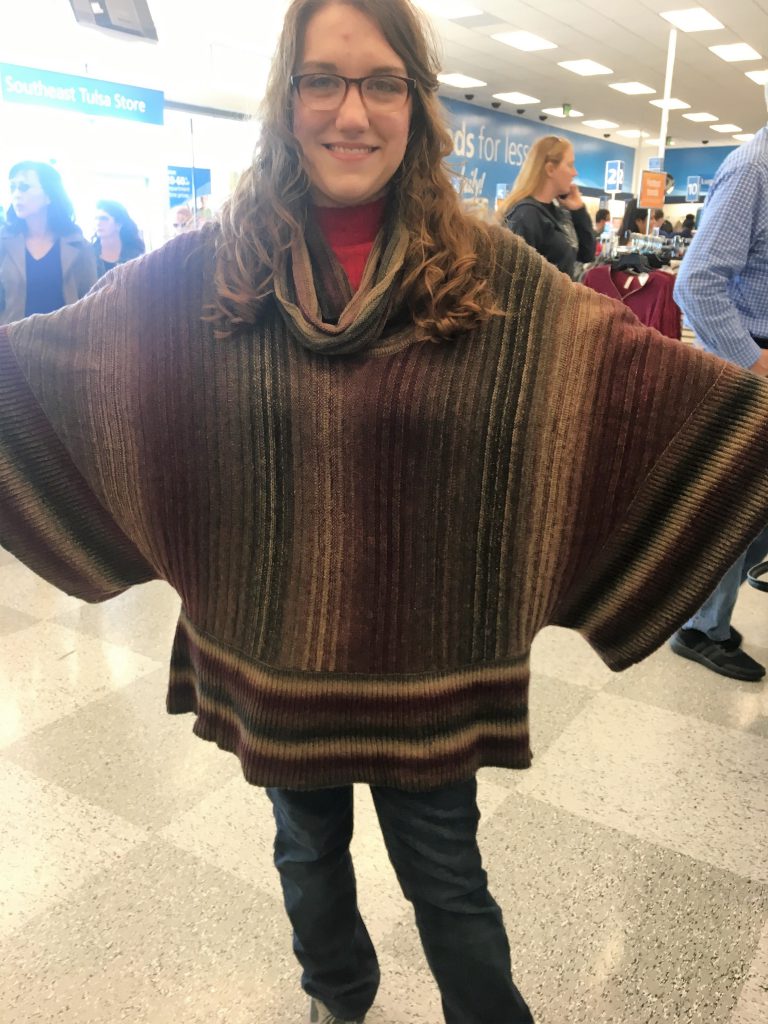 She found some other things she loved and I went ahead and bought them. Then she put them on her list stating that I am the store.

I found some things I like but not sure if I want any of them. 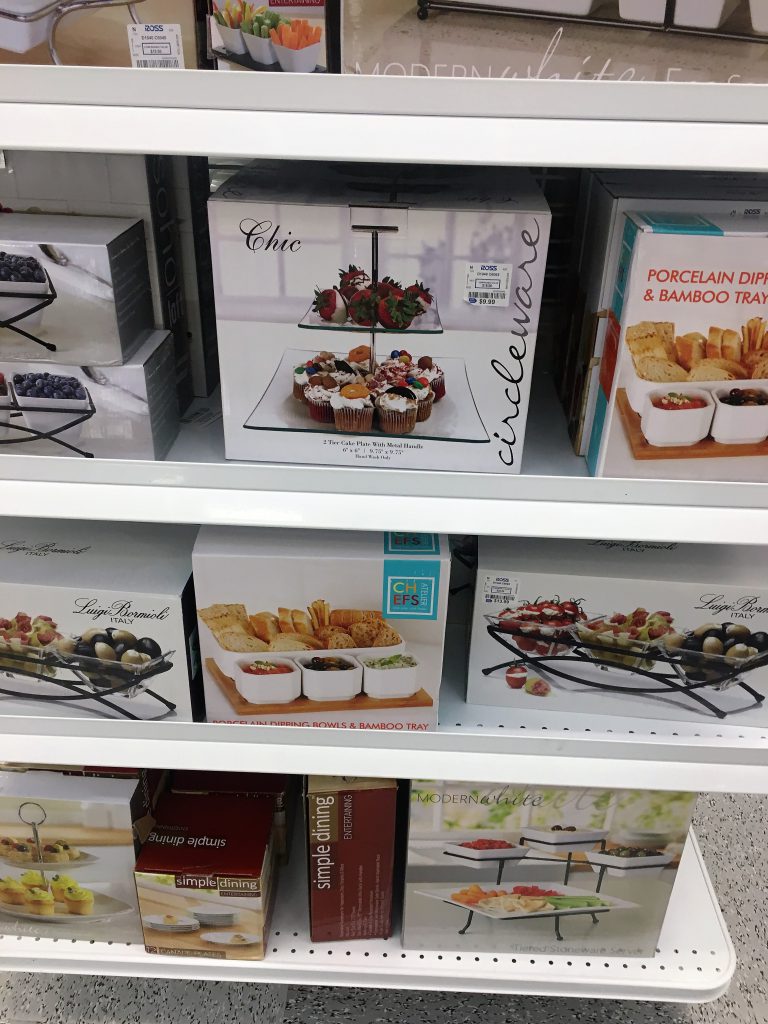 I also saw some artwork that were inspiring. I took pictures so I could attempt to recreate them myself. 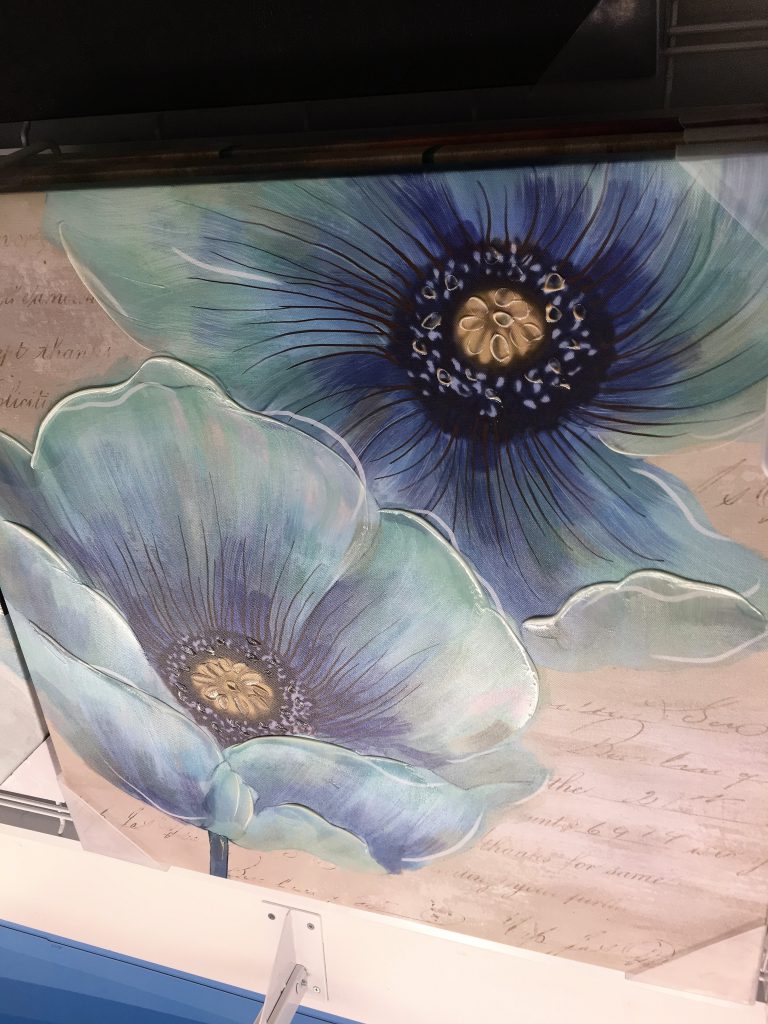 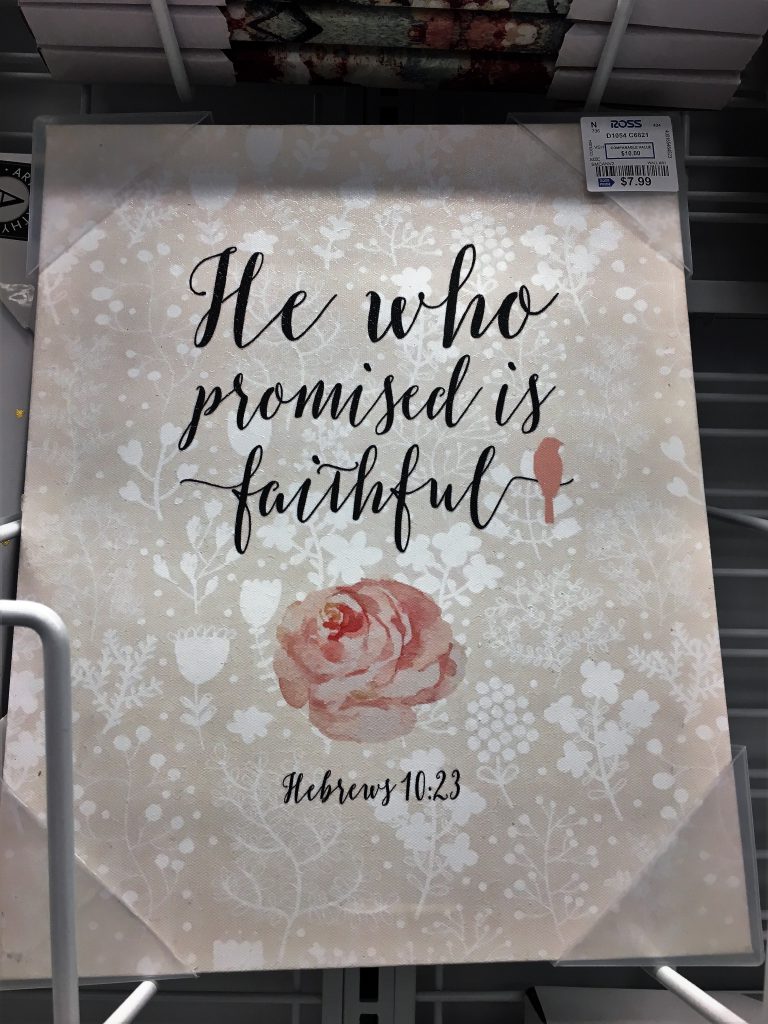 Even though we hadn’t finished scouring the rest of the store, we were starving and headed out to eat lunch, a couple hours later than lunch time.

After lunch we decided to stop at Barnes and Noble for some browsing. I am in need of a new 5-Year One Sentence Journal. I’ve been looking on Amazon and found several that are a bit larger than the original one I’ve used. I wanted to see them in person. Unfortunately they did not have any of the 6×9 size. I did, however, find this nice looking one and it has a little more daily space to write in. 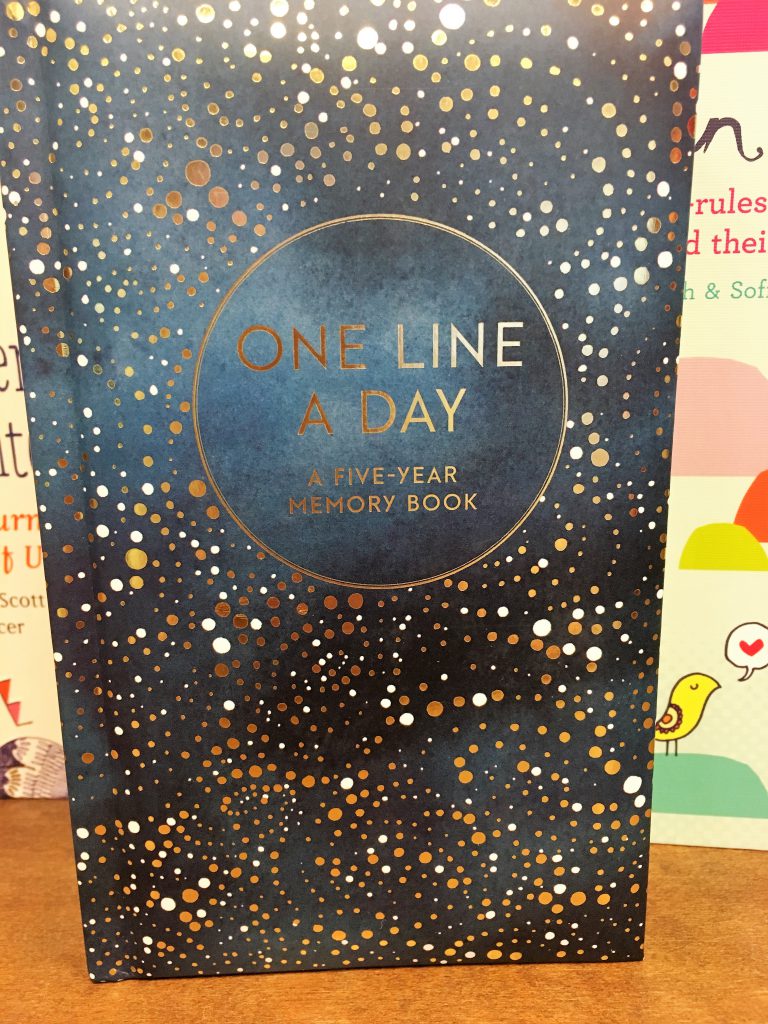 I also found this calligraphy set with lettering book included. I’m not sure if I want it but it looks nice. And it is priced enticingly. 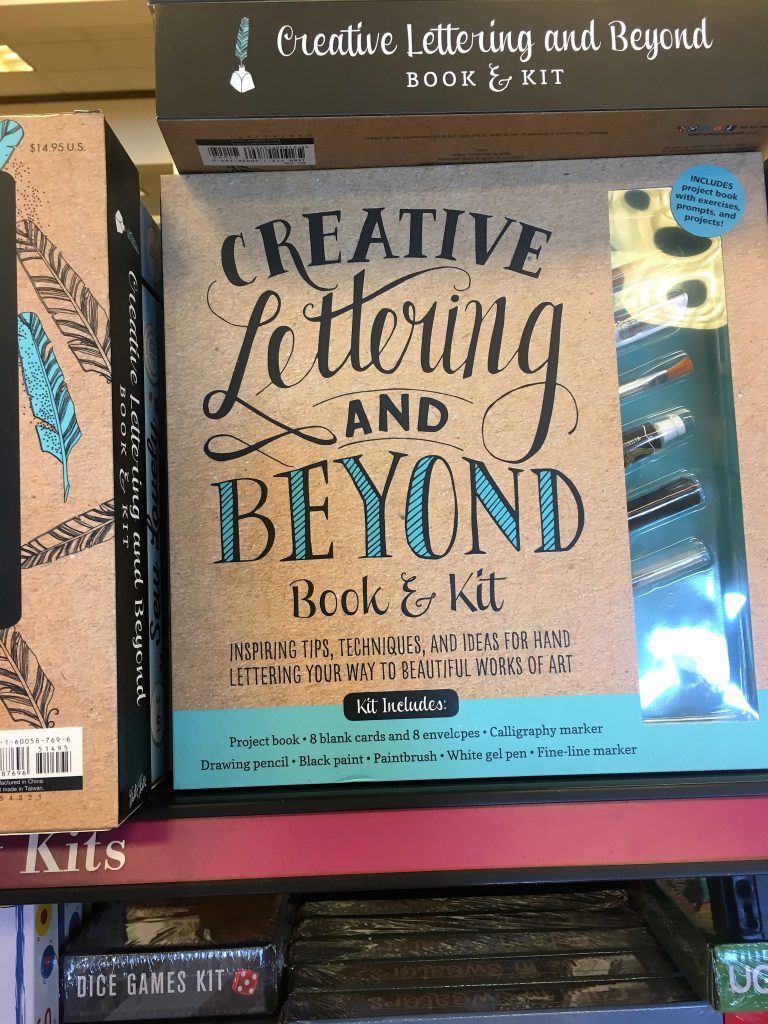 I love Barnes and Noble, as does Tiffany. We spent quite a while there and were finally just too tired to continue.

Then the other night, as I was in bed and would roll over to my other side, I got quite dizzy. I nearly fell down when I went to the restroom. The next morning when I got up, I was quite dizzy. We prayed for me, quoted some Bible verses on healing, and went about my normal morning routine, fighting dizziness as I went. Thankfully, by the afternoon I was feeling normal again.

I tried on some pants and shorts that are a size smaller and they fit!!! Whoo hoo! Unfortunately tops aren’t moving as well but I’m sure they will sooner or later.

I get to see my grandson and son this weekend, as well as my youngest sister, her family, and my parents. I’m looking forward to it. It’s been several weeks and I miss them.