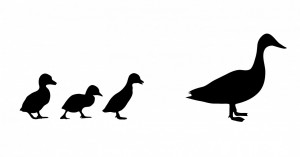 I’m sitting here trying to find some inspiration or guidance as to what I should write about today. I found a few possibilities but none seemed just right. It’s a new month, so there are a whole host of observances to write about, but again, none seemed right for today.

The one thought that I have to share is that children emulate what they are around. It is likely that this is one reason you decided to homeschool. It is definitely one of the reasons I did. You see, Brian, my oldest, was a darling, sweet, little boy but when I put that little obedient one in the pre-k at the Christian school at the church we went to at the time, he ended up in the principal’s office FOUR times that year, for misbehaving. My darling, sweet, little boy was a follower and would do what he saw others do, only he did it after the others stopped doing it and got caught – which is really good for him, because he learned he couldn’t do what others did.

This experience was very eye-opening to me and my husband. It was shocking to learn that our first-born was a follower. Now, I am not saying that following is bad because aren’t we all supposed to be followers of Christ? But he was choosing the wrong people to follow. This really played a big part in our decision to homeschool him because clearly, he needed a bit more supervision over which children he was in contact with and thus able to “follow.” Don’t misunderstand, he was not ostracized; we just became MUCH pickier about those he was able to be around (and learn from).

So then, most of the time he was around family, which includes me. One really big thing that I realized, not too far on this homeschooling endeavor, was that I needed to be setting the proper example for my children. If I sat around “playing” on my computer all day and rushing around at the last minute to get things done, then they might very well choose that trait to imitate. If I snapped, shouted, or nagged, this might be the trait they pick up and emulate. In short, I had to watch my example because I had chosen to disciple my children not just tell them what to do. In truth, kids will do what they see much more readily than they will do what they are told.

Thus it is vitally important that the role models in the home do things that they want their children to do. Invite them to join you in activities. I wanted my kids to know how to tidy up the house. I didn’t just tell them what to do, I had them join me in doing it. Then as they got older, I could give each child a task that they were responsible for and expect that it would be done to my standards (being lenient on those standards when necessary).

So I challenge you today to take a look at what kind of example you are modelling for your children. Look at your children’s negative traits or actions. Is it possible that they are translating something you are doing into their own lives? I know, it is a very sobering thought. Pray and ask God to help you be the best example you can be for your children; He’ll help you!