This week was really bad roller coaster ride; you know the kind that just tosses you all around. I had great plans for the week. I’d broken the work down that needed to be done into three days, so I wouldn’t get overwhelmed.

Then Daddy was still in the ICU. His oxygen numbers where mostly not good but he did have improvement throughout the week.

I like to have my Christmas tree up right after Thanksgiving and for the last 15 years or so, we have done it on Wednesday. We also do all of our holiday dessert baking that day. This year I decided to start putting the tree up on Monday. It is a good thing too because we needed a new strand of lights and snow! Ugh! 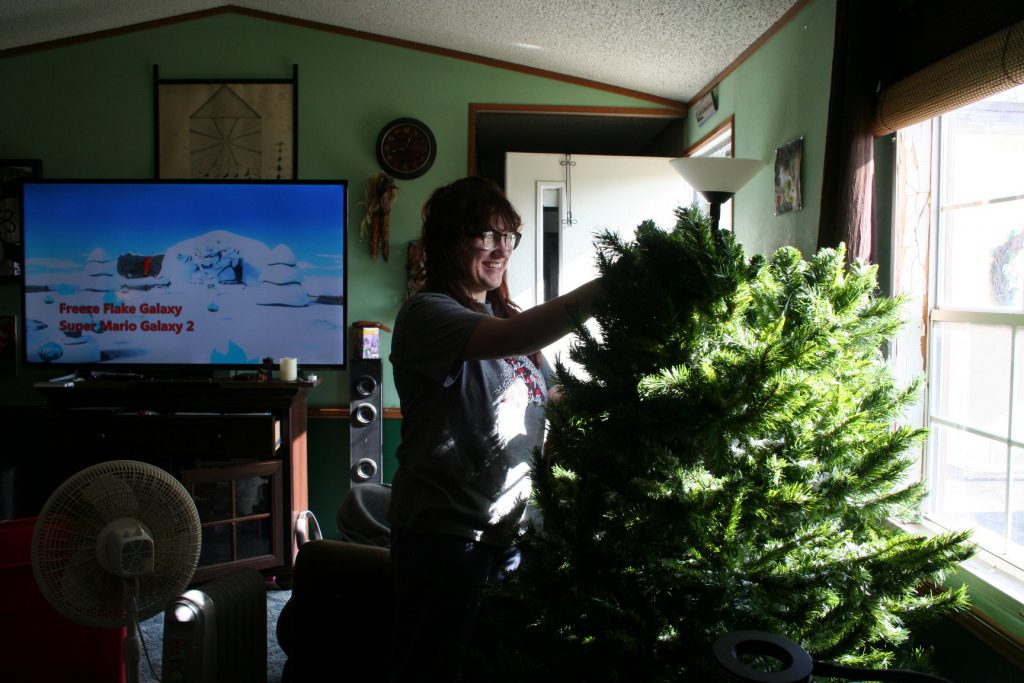 Michael stopped and picked up both items on his way home, so we finished the tree on Tuesday. We also did half the baking.

Daddy’s oxygen levels fluctuated a bit but he still needed a lot of oxygen. On Wednesday afternoon they moved him out of ICU saying he was no longer sick enough to warrant it. However by 11pm his blood pressure plummeted to 60/40. They gave him something to bring it back up and returned him to ICU.

They started a battery of tests and before too long the doctor on duty had the nurse call me and my mother. The short version is that they were as surprised as we were but she felt we needed to be more concerned with his comfort at this point than attempting to save his life (he did have a DNR). It was bad.

I asked if we could come see him and I was told no but she’d check, maybe the policy had changed. Of course, I immediately sent out calls to people to pray, as did Tiffany. The next phone call was that they would allow us to come. He was on a bipap machine.

God worked a miracle and Michael rushed Tiffany and I to the hospital. They took us up, got us protected, and let us in to see him. It was hard. He hated the bipap! Mike and Tracie were bringing Mom and they were only a few minutes behind us. He had to hold on so they could say good-bye too.

He did! Tiff went out after telling him she loved him and loving on him a few minutes, but it was very hard to see. She’d just left the room, Daddy kept trying to take off the bipap mask, but the nurse and I convinced him not to until Momma could get there. She was just outside the door getting garbed up.

I don’t remember when they took off the bipap and put back on the other oxygen–everything is a blur–they gave him lots of pain killers and you could see him beginning to relax a bit. After a song or two, Mom told him he could go be with Jesus. I told him we’d take care of Momma and not to worry about her. More quiet singing and he left.

The nurses were great!!! They gave us as much time as we needed. He passed from this life around 1:45am on Thanksgiving day morning. I’m just so very thankful that Thanksgiving isn’t always on the same day every year!

The nurses told us several times what a sweet man Daddy was. I’m thankful he had some great nurses looking after him, in a time when we couldn’t be by his side during his last days of life here.

To say our Thanksgiving was different, is an understatement! Brian, Lauren, and Liam still came up. We went over to my sister’s house in the afternoon–we just needed to be together. We each handle loss differently. Mom is currently solid as a rock, but we each had our moments of breakdown throughout the evening. At the time of this writing, he hasn’t even been gone a whole day yet; it just doesn’t seem real.

I’m going to run. It is Thanksgiving night and I am operating on about 2-3 hours of sleep. I’m ready to crash.

Thank you for all the prayers; they are greatly appreciated.