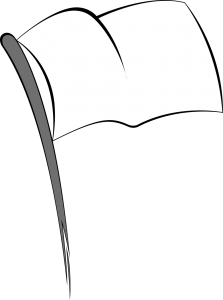 I was talking with Tiffany last week and we were discussing compromise in marriage. No, she is not yet married but we talk about these things to prepare her for marriage one day; she is twenty-one.

“–When in a argument or heated conversation . . . there needs to be a point to throw down the white flag: ensure both understands what the other is saying, stop, take a minute to collect yourselves, pray, and talk it out to a resolution.”

Basically, we said that it would be good for couples, when they first start out, to develop a protocol to resolve arguments or other such opposing situations. Because the fact of the matter is that when you are in a frustrated conversation you are no longer trying to be reasonable and understanding, you are trying to get the other person to understand why you are right.

Here are the suggestions we came up with:

One example we had was about how much money to spend on a birthday present. Husband wants to spend $40 and wife only wants to spend $20. It gets heated. The conversation is stopped. Each person cools off, they come together and pray together, and then the husband says what I understand you to be saying is that you want to reduce our normal birthday gift from $25 to $20. To which she should reply in the affirmative and then proceed to tell him that she understands him to say that he wants to increase the budget from $25 to $40.

Then proceed to ask the other their reasons. This is important because this is where you find out why the person wants to take the action they are suggesting. Maybe he feels that gift choices are too limiting at $25 and $40 would yield better options. Whereas the wife may be wanting to decrease it by $5 to budget in for something she wants/needs. Maybe it is to afford a night away once a year or to get something small that hasn’t been affordable under the current budget.

(I know these numbers are really arbitrary and not necessarily realistic, especially since it is usually the husband who wants to decrease spending as much as possible.

But I use it as a generality to explain the resolution protocol.)

At this point in the protocol it is important to both be willing to offer solutions to the situation or agree to table it so that you can both pray about it individually and schedule a time to talk about it again. This scheduling is vital because then it gives both parties the feeling that they are being heard and not ignored but that we will revisit this and come to a resolution together.

I do not believe that either party should always be the one to give in/compromise. Both parties need to feel that they are heard, considered, and that you have agreed on an outcome together. Sometimes you should both give a little. In the example above, maybe they agree to increase the budget to $30 or $35 but also agree establish a budget for whatever it was that the wife wanted to do.

Establishing these steps to conflict resolution can help keep conflicts from escalating to a shouting match and hurt feelings. Even if you are already married, you could talk to your spouse about setting up something like this to curb out of hand conversations.

Do you have a system like this in your marriage? I’d love to hear about it in the comments.