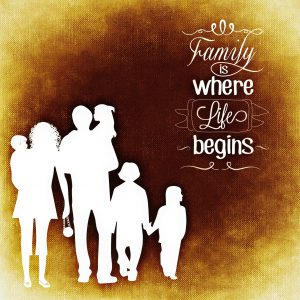 Years and years ago, we were in a church service where people were being prayed for and sometimes the minister would have a “word” for them. I remember one word to a young single mother, that really stuck with me. He said that her ministry right then was “to raise godly seed.”

I knew that word was for me, as much as it was for her. You see, I’d been having a difficult time with wanting to be doing more in the church but because I had three small children, ages six, four, and baby, my hands were full and I had no time to help do anything. I even missed the weekday service because although I homeschooled and didn’t have to have them up at any certain time in the morning, the youngest needed to go to sleep. She has always been my early to bed child. This wouldn’t have been a problem under normal circumstances, I would have just let her sleep during service but she snored. It wasn’t a cute little quiet snore either. If I took her to the nursery, she’d wake up and want to play but would be cranky for the next couple of days, which I learned the hard way. I finally gave in and did what was best for her and stayed home on Wednesday nights.

So that day so long ago, God was telling me that I was doing an important job and that it was just as important, if not more important, than other things I could do. This was hard to accept because I had been in churches that pushed volunteering, and so this was ingrained in me. Thus turning my mind over to God’s way of thinking, took some time but was also very encouraging to me. It helped me with those tough days of character training (a.k.a. days where it didn’t seem that I got anything done except disciplining children). It is important to realize though that character is WHO your child will BE when your job is done.

Fast forward to today and I have indeed, raised godly seed. All three of our children are serving the Lord with all their hearts!

What more could a mother ask for?

I read a great post on another website concerning this matter. If you need more encouragement in this area, I recommend that you go over and check it out. The article is titled, This the Lie that will Rob You of Your Motherhood–And You Probably Already Believe it.