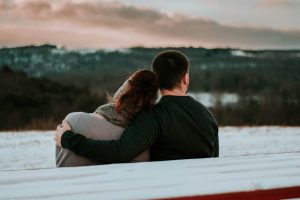 It was cold yesterday. Very cold. I wore my warm winter clothes but I was still a bit chilly. Of course that is probably because I’m eating lots of veggies and cutting back on fat a bit (I have a tendency to overdo that luscious stuff) in order to jump start some weight loss again. For those following the Trim Healthy Mama plan, Tiffany and I are doing the Stubborn Losers’ Menu available on the membership website. It helped me kick start weight loss last time.

At any rate, sitting in church I was a bit chilly, so I nudged Michael and basically asked him to put his arm around me.

I’m usually so warm-natured that sitting that close is not usually desirable for either of us. I was surprised how good it felt to have his arm around me.

I made sure I told him so.

Later we were at my sister’s house spending some time with her dogs while they were gone. We were sitting down watching a movie and he surprised me once again by putting his arm around me. I was cold and covered up with a blanket sitting beside him. I can only imagine it was because I let him now that I liked it in church.

So, the point of this story is two-fold. One: ask for what you want and Two: Let him know when he does something you like. I guess it really boils down to something I have said before: communication is important.