I was looking through pictures of what I did over the last week and saw this one. 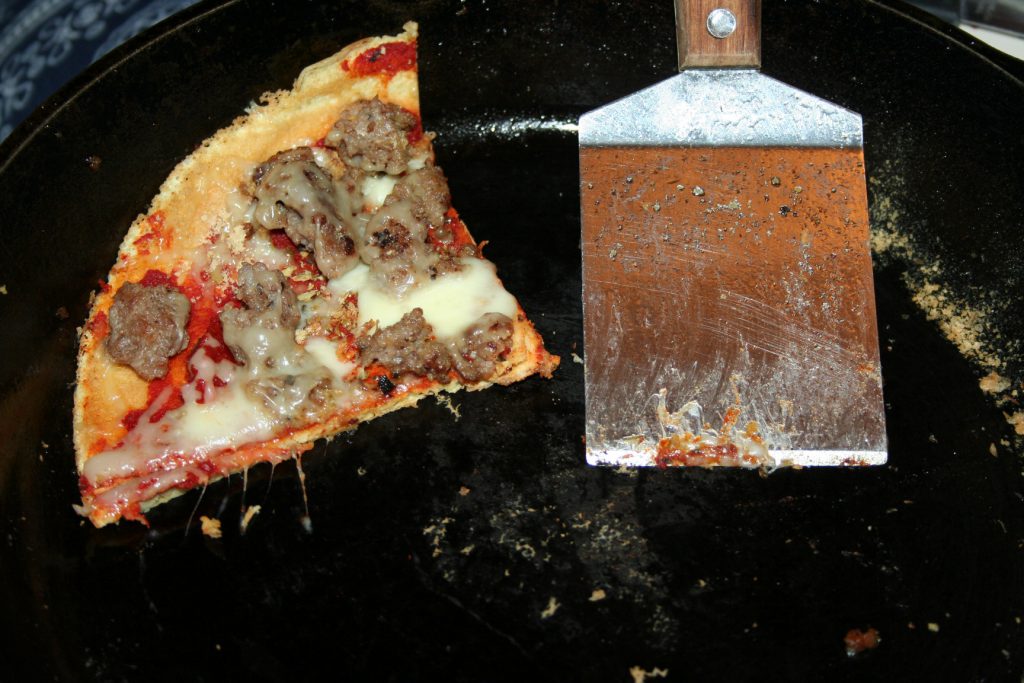 I took it one morning when Tiffany and I had these for breakfast. It is the Breakfast Pizza with sausage instead of pepperoni. It was really good. We hadn’t had them in a long time. I’ve been trying to cut back on my dairy consumption but that day, I just needed pizza.

It’s a good one to have any time of day and it is filling!

Tiffany and I have been doing some form of exercise every day, not much, but some. One day we did a THM Work-In, which takes about 20 minutes. Then a couple days we did about three songs on our zumba Wii game. Of course, one day was errands and we get a lot of walking done that day so no other exercise is even considered. We buy lots of gallons of water each week and carry 4-6 of them in the house at a time, so we even get some weight lifting in. 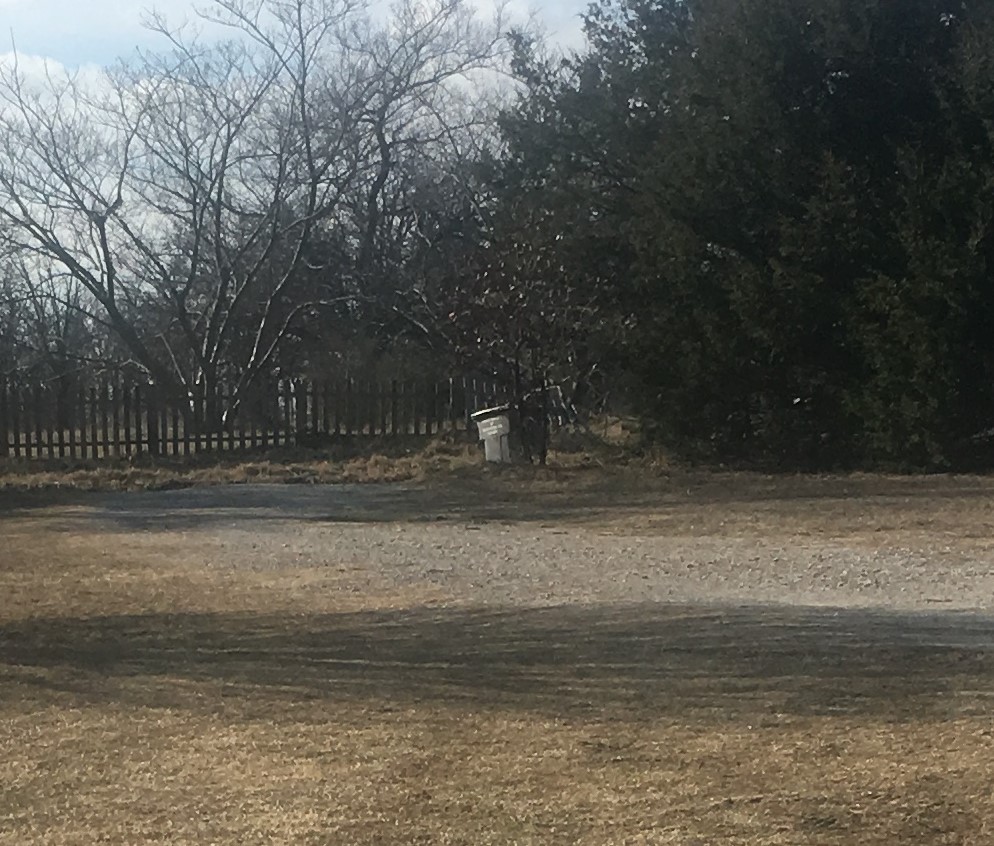 The other day, Michael took the trash out with him when he left for work. (We had to double bag it because the bag was ripped when he pulled it out of the trash can.) About a half hour later he called me and told me this sad tale of woe.

He got into town at his first stop and saw the outer bag still hanging on the back of his van but the broken inner bag and all its contents were missing. He asked me to go looking for it to clean up the mess. I wasn’t thrilled about it but I went anyway.

I headed out and got a mile away and still no trash. I turned the corner and began the second mile of dirt road and this is what I saw, in the road up ahead. 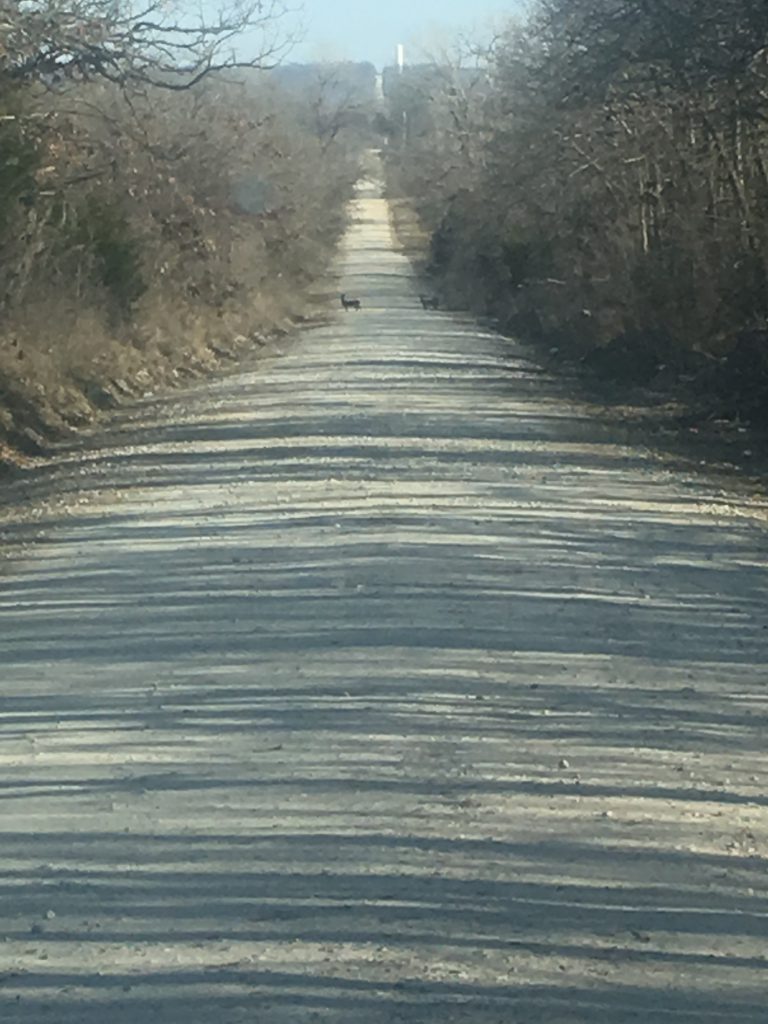 They just stood there. I stopped and took some pictures. 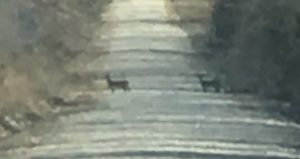 These two deer were standing in the road. When the left one bounded off, the second followed. A third came out into the road and then went back from whence it came. It was nice to see while on my hunt for trash.

I got to pavement and decided that I’d go a couple of miles more. Then I went another mile or two and called Michael and reported that I had yet to see any trash that looked to be ours. I went back home, still looking along the way but returned home empty handed. So either it came out in bits and pieces and blew off the road sporadically or the whole bag fell out and someone picked it up and disposed of it. No idea which.

I tried another grocery budget makeover last month and am glad I did not pay full price for it. I considered requesting a refund but I felt like God led me to the course and did not want me to seek a refund. I did enjoy the videos and their suggestions but found that since we already eat all our meals at home or from home, many of the suggestions aimed at making it easier to eat at home rather than from a restaurant were not really helpful for me–at least from a money saving  standpoint.

I had already planned to look into money saving apps, so the small portion of the course addressing this was not really very enlightening. I’d heard about couponing and sales cycles and coupon stacking already so none of that was news either. The information shared about how to do CVS or Target is already available free and was not even a part of the paid content. So, it was good because it gave me some good hard numbers to work with and aim for but I pack a lot into my budgeted money. I include animal food, vitamins, clothing, birthday gifts, household updates (like new rugs or curtains) and such in my budget. These ladies did not include any of those things, nor did they include their dining out budget to get the whole picture. So, I could do better, but I’m not doing as badly as I once thought I was.