I’ve not kept up with #Valentangle2019 very well. Thankfully it isn’t a whole month long “challenge,” so I’m okay with taking the whole month to do the two weeks of prompts.

The puzzle 3Z one I did last week is a favorite of mine and my daughter’s evidently. This past weekend she changed up the tiles in my gallery frame, including this tile. 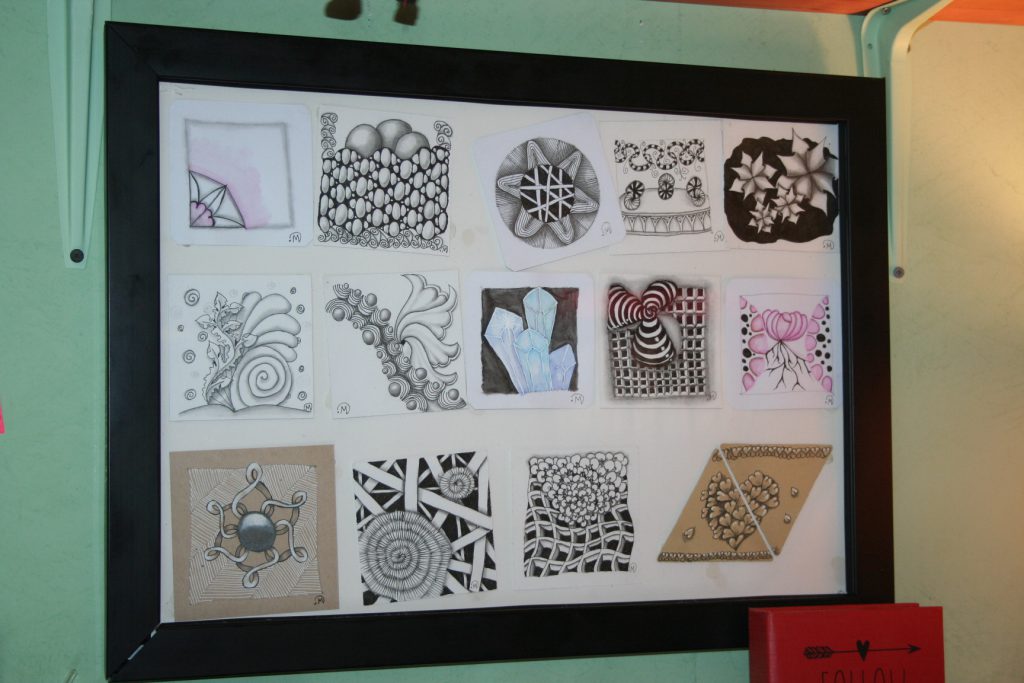 (I use plasti-tak to position the tiles. It takes a bit of patience and Tiffany is fast at everything she does, so I’ll need to go back and straighten some of these out. That one in the middle of the top row fell twice on her and she just didn’t have the desire to fix it yet again.

) It would look a lot better with a proper matting, but it is what it is. Maybe one day I’ll do something with it but for now, this works.

I have a hard time choosing the pieces to put in the frame because I like so many of them. It is difficult to take down some of the older ones.

So, she decided it was time to update the the pieces in the frame. I don’t think we changed the tiles at all last year.

The removed ones will go in my album. (I’ll have to share pictures of that another time because I don’t have time or gumption to get it out, take pictures, and connect the camera up to my laptop for a third time today.

Well day five of Valentangle2019 tripped me up. I still haven’t done that one. It was to tangle on something other than a tile. Now even though she used a rock, it did not have to be a rock; it could have been anything–an envelope, a bookmark, really anything. But it still tripped me up because I didn’t want to just settle for some other paper and ended up not doing it yet.  I still may before the month is over; I’d really like to use paint on a rock. OH! or maybe paint on one of those little canvases I think I have . . . I’ll have to look into that.

On the 6th the prompt was to do Wholy Hollibaugh with hearts in the lines. I had not done this before and was excited to give it a try. I always like the contrast of black and white so Hollibaugh is one of my favorite tangles. This however was a bit challenging. I decided to make the strips different: lined, diagonal, dotted, and plain. I tried to cross them enough that there would be some good variation and depth. I forgot to take a picture before it was shaded but the shading still adds significantly to the depth. I drew it in my old Tangle A Day Calendar. 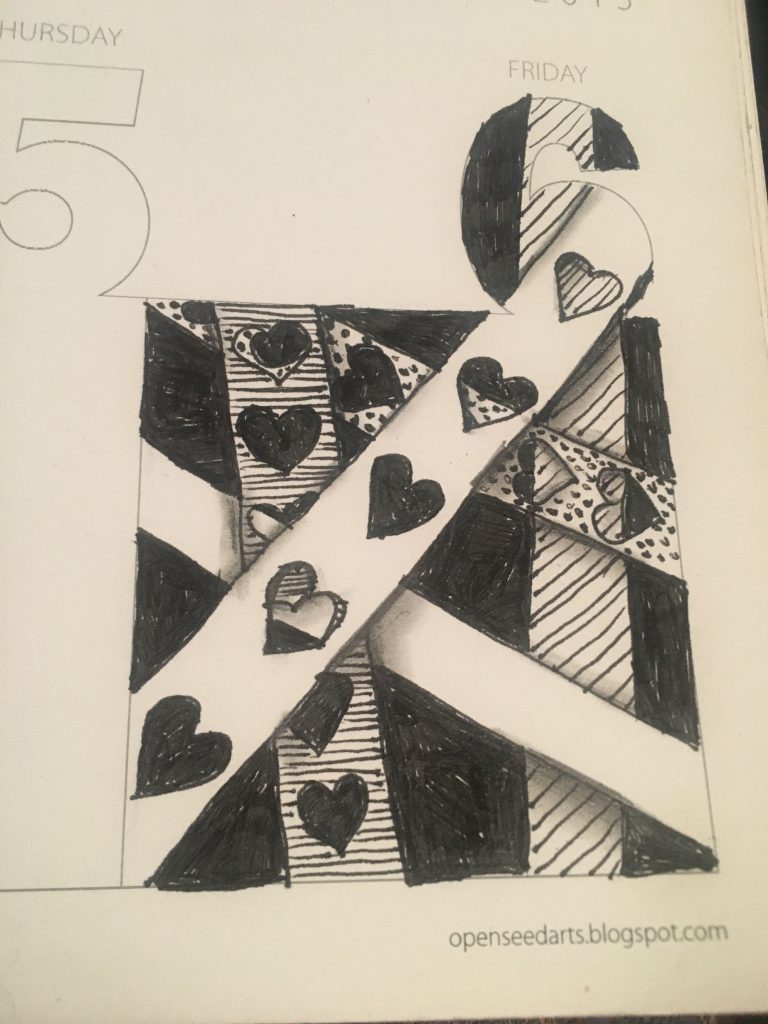 It looks like I might have one layer wrong somewhere but my mind cannot process it correctly right now, so I’m not sure.

The prompt for day 7 was to use the “love fragment” and make a flower with it or use other flowery tangles. I thought that my version below looked a lot like a Narcissus. So I added a bit of two yellows and a light orange watercolor pencil.

Here it is before shading and coloring. 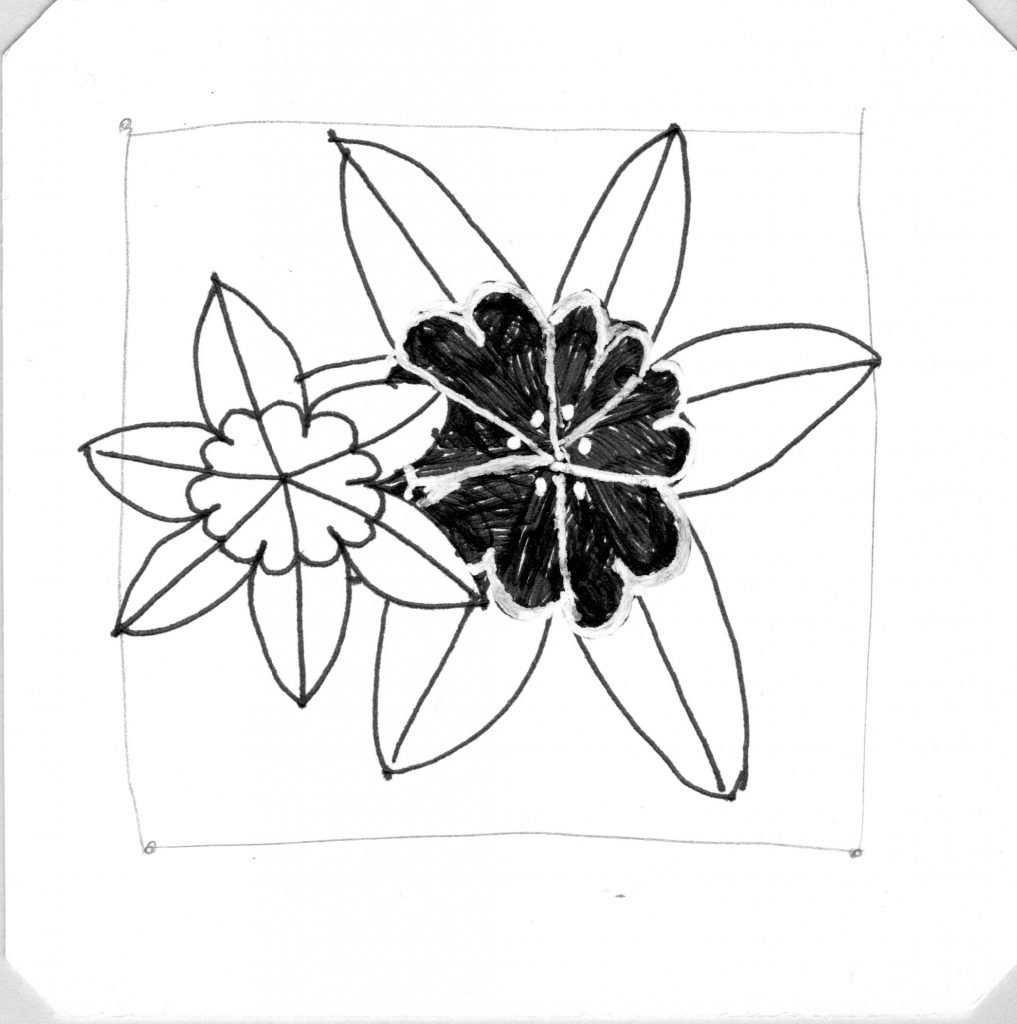 I don’t remember why I blackened in the hearts on the larger one . . . I think it was just for some difference/contrast but then I realized you couldn’t make out the heart shapes very well so I went over the outline of the hearts in white and added the dots in the points. here it is shaded and colored. 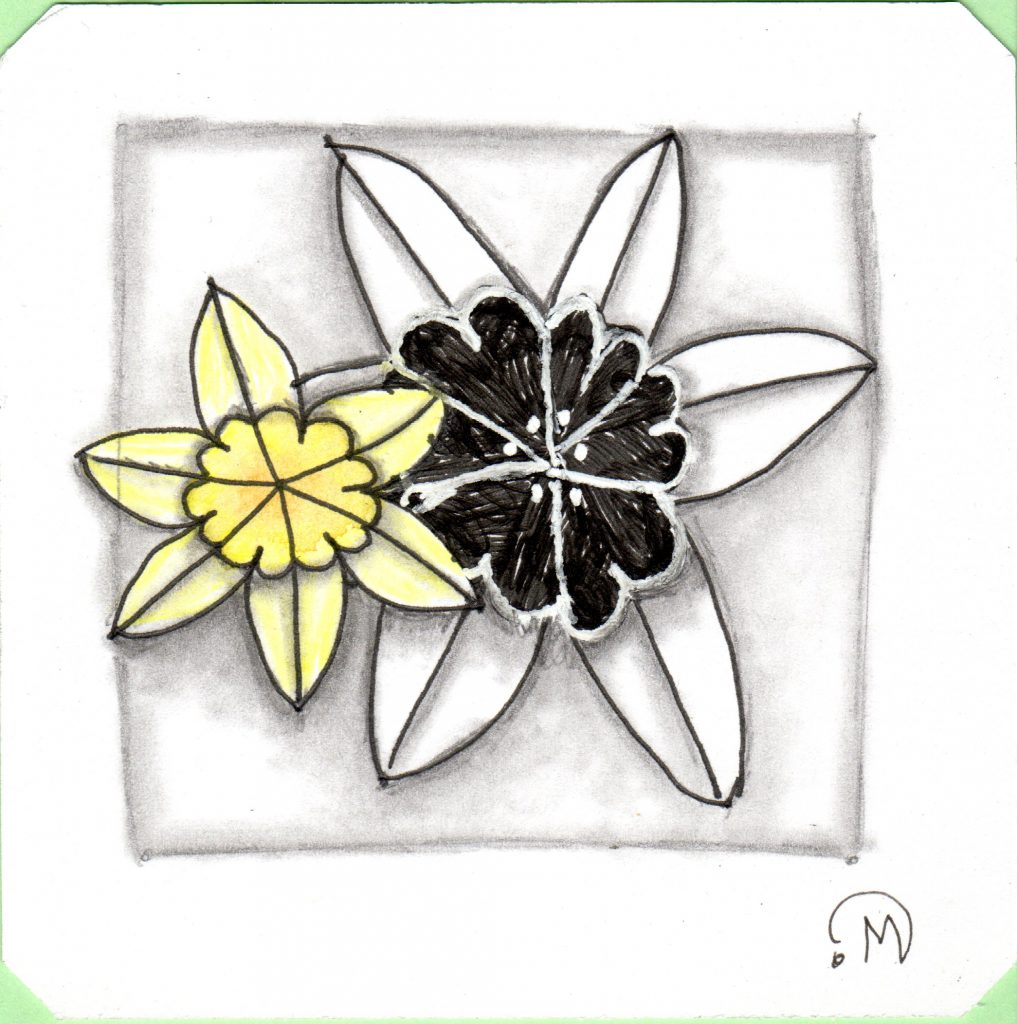 That’s as far as I’ve gotten with Valentangle2019 so far. I even did those last two this weekend while my son and his family were here. So that brings us to the Diva Challenge, which is to be inspired by Valentine’s Day. This is great because I was going to make a card for my hubby this week as he prefers homemade cards to purchased.

I asked him which he prefers: tan, black, or white tiles. He had a hard time deciding and then said he liked the shiny black one. Great. That meant the scratch off tile instead of any of my others. Oh well. I made it work.

Here is the front of the card. I stuck the scratch-off tile to the center of a folded piece of black paper. I used Luv-A for my scratch-off tangle and Heartline around it, once I glued it on. It got a little wonky but it’s okay. 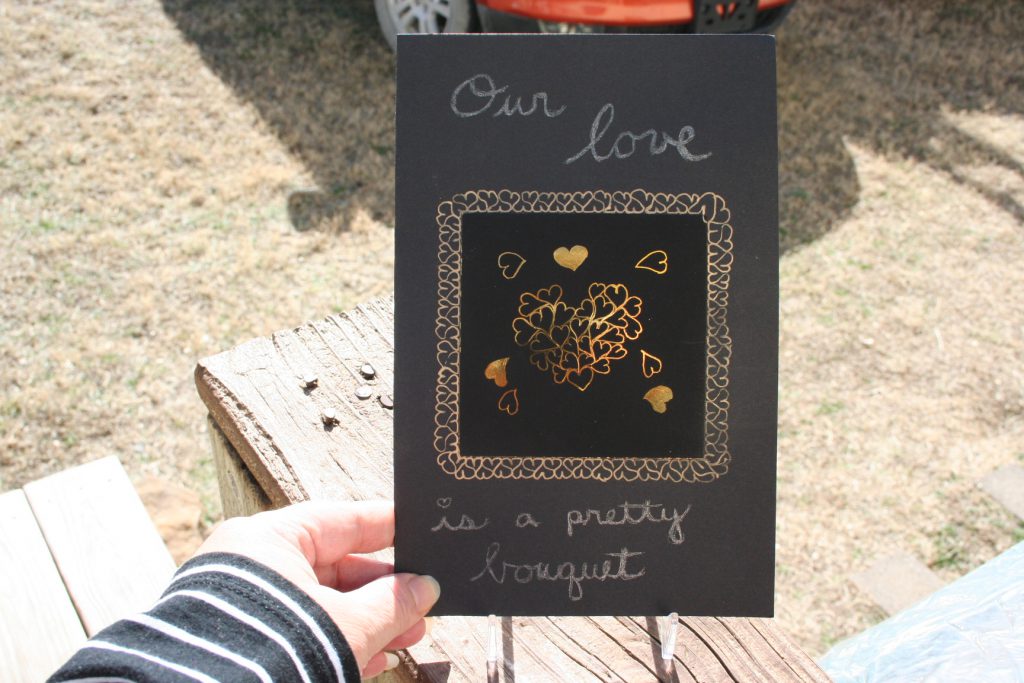 Inside I put coupons for him.

I folded a piece of paper and wrote inside. So he’ll have to lift the flaps to see the 7 ‘gifts’ I’m giving him. The instructions on how to redeem them are on the other side of the fold. 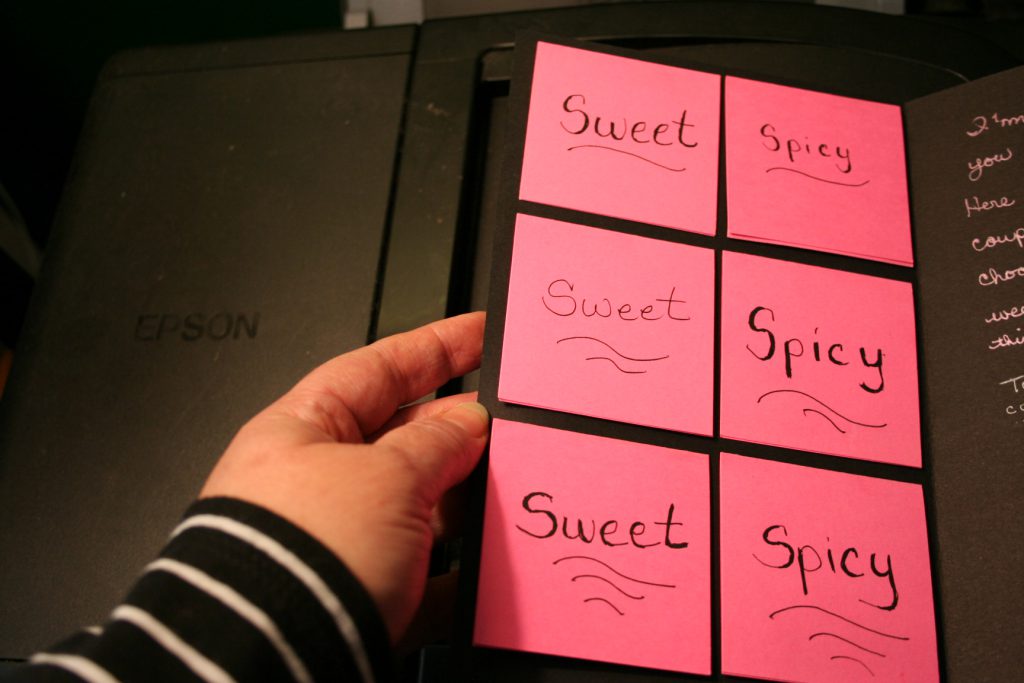 Thanks for stopping by and for your sweet comments. I hope you have a great week!