A little while ago, a friend on facebook posted this picture. 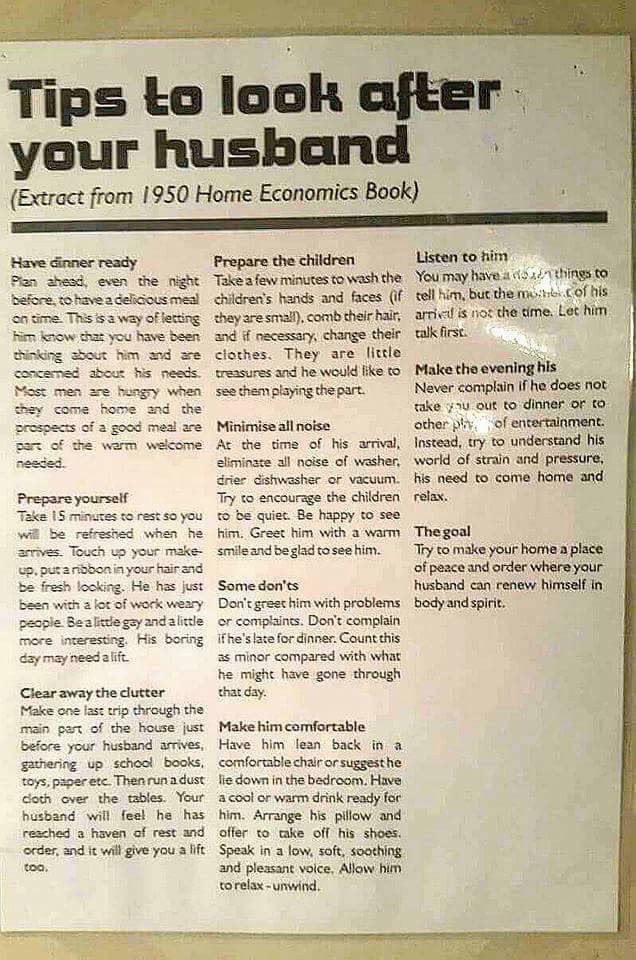 I don’t know if it really was taken from a Home Economics book from 1950 but it has some good points.

I have recently realized though, that I need to have some kind of snack ready for Michael when he gets home, as he is hungry then. I’ve suggested different snacks but will probably begin to prepare him a little snack plate or appetizer of some sort this year-at least that’s my goal.

When the kids were young, I had the children tidy up their schoolwork and toys when I knew he was on his way home. It made for a happier husband.

I don’t typically run the dishwasher during the daytime, as I do it before bed, so that isn’t a normal daytime noise for our house. I try to get my load of laundry done earlier in the day, so that is also not a noise we have in the evenings, thankfully.

I think the “article” has some merit and is not out-dated, at least for me. If the wife works outside of the home, it would not have nearly as much usefulness but since I believe the woman’s place is at home with the children, I think there is much to be gleaned from the tips shared.

I hope this is food for thought for you. I had no idea that I’d be sharing some “New Year’s Resolutions” per se, with you today, as I had no intention of really making any but I guess God had other plans. I hope you will prayerfully consider what God would have you focus on this year, in regards to thoughtfulness towards your spouse.