We made sandwiches before leaving the hotel. I’d brought sandwich fixings and snacks so that we could be frugal AND stay on plan more readily. 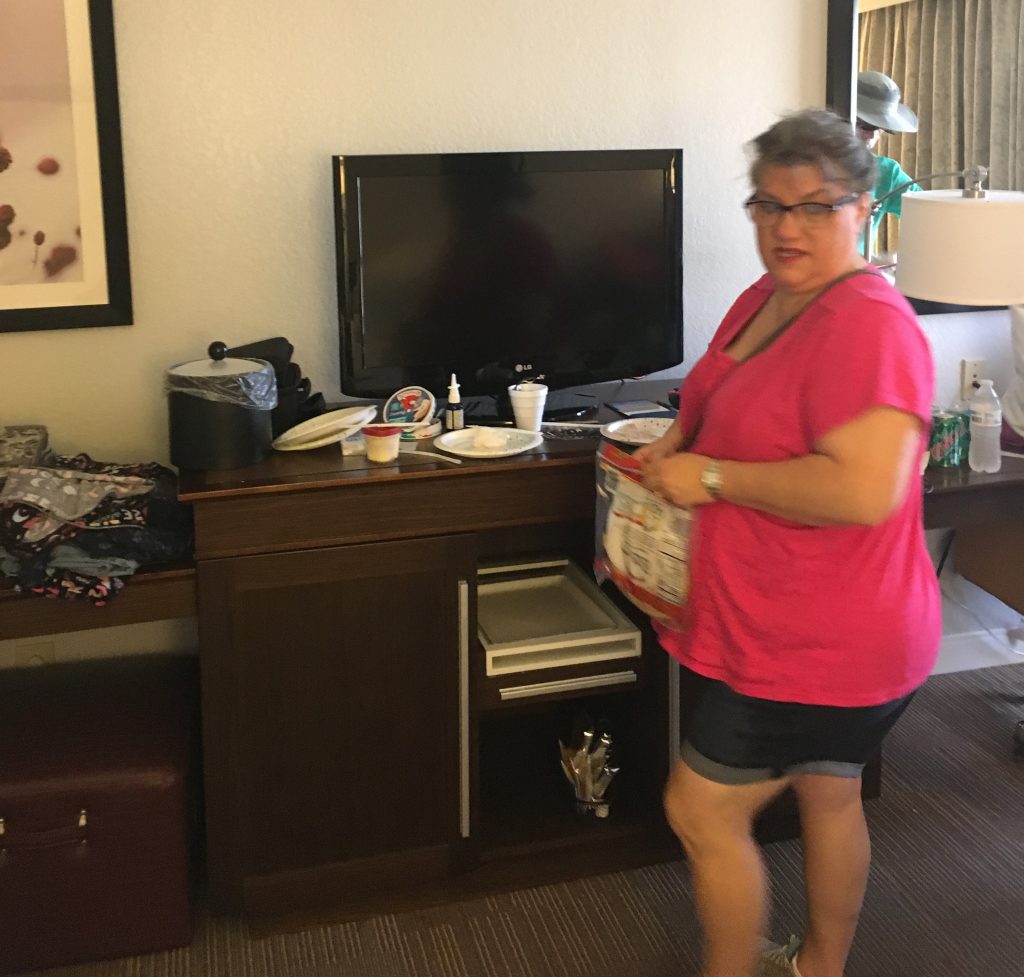 My oldest son, Brian, and his family live nearby and were able to join us at the zoo.

Yay! Some grandson time!!! Okay, I didn’t get a lot but you cannot be but so pushy on children or they push you completely away. 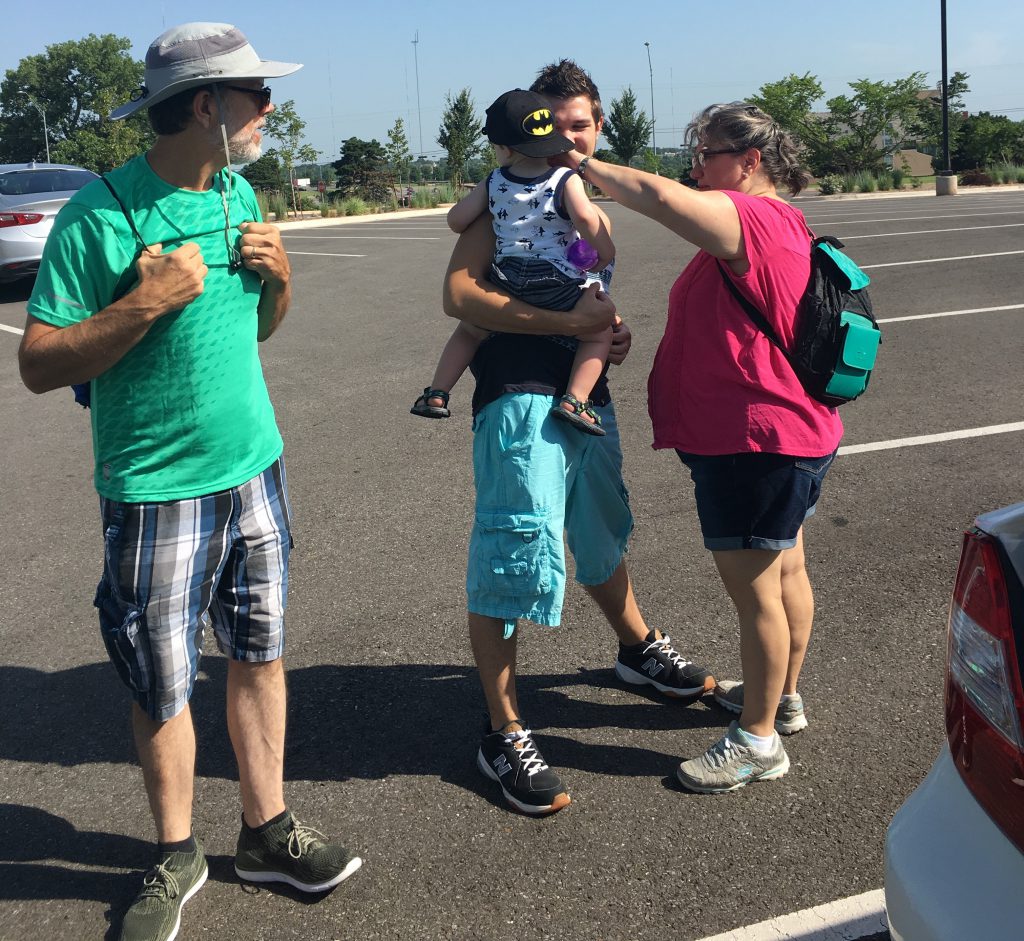 So much to say about this photo. First this is a bad photo of me because of the angle on my belly but it showed not being pushy. I hadn’t seen Liam, my grandson, in a few weeks and when we pulled up, the car scared him. He loves his Uncle Sean a lot (he’s a daddy’s boy right now, says Lauren, and I’m guessing Sean reminds him of his daddy

) and, as you’ll see, he liked hanging with him that day. Any way, Liam wasn’t being very receptive to me, so I just backed off and waited him out.

See that backpack I’m wearing? Michael got that for me about 25 years ago. Yep, 25 years ago! I knew I’d need some way to carry some water because the heat and I are not great friends.

So I pulled this backpack out and used it for the first time. It also collapses down to just a small pocketbook/wallet and phone holder. It finally came in handy.

I don’t recall ever seeing a swan in real life before. This was pretty. 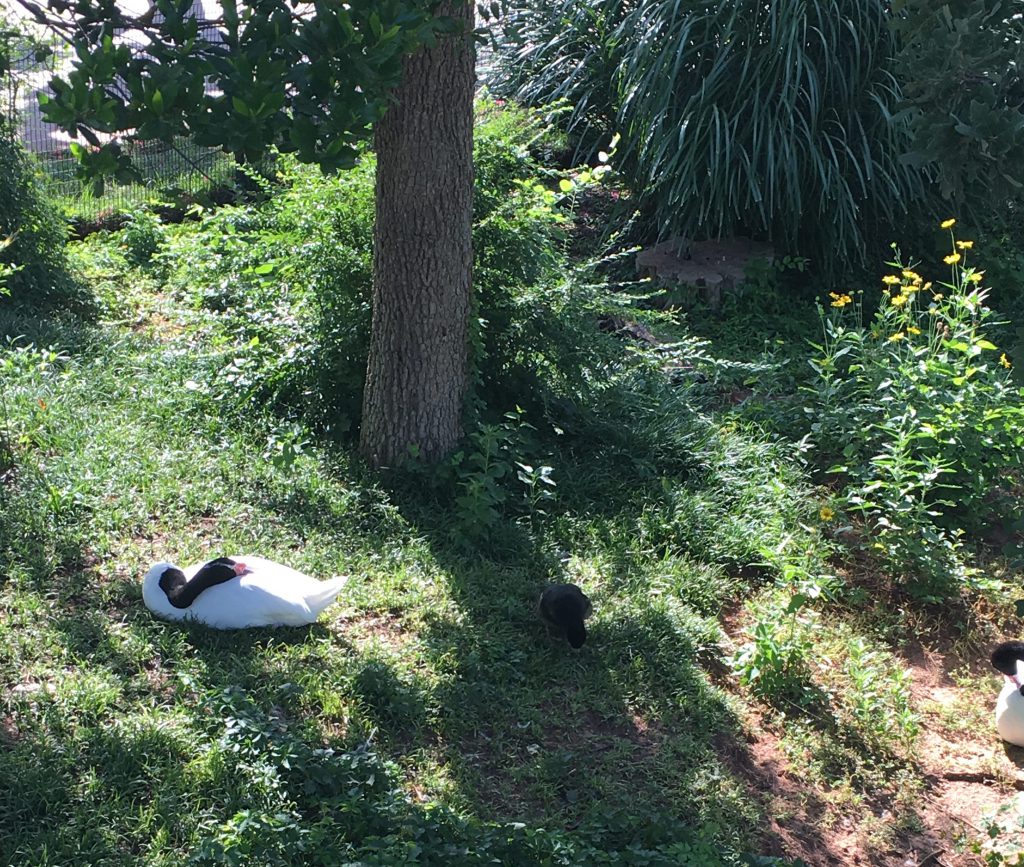 Did you ever see Aristocats? This reminded me of a scene from that animated movie. 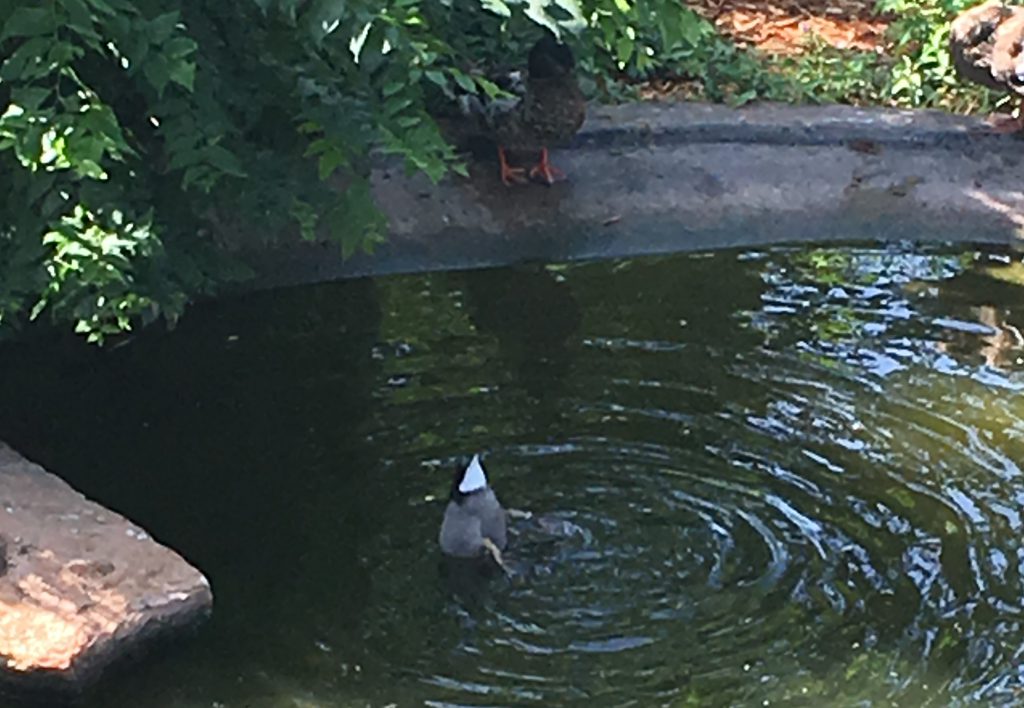 I know it’s not a goose but “bottoms up!”

Typically, I am too hot and my hands are too clammy such that Michael does not hold my hand. I don’t know what came over him this day, but I loved it.

It was so nice to have the energy to set the pace and he was right there with me. 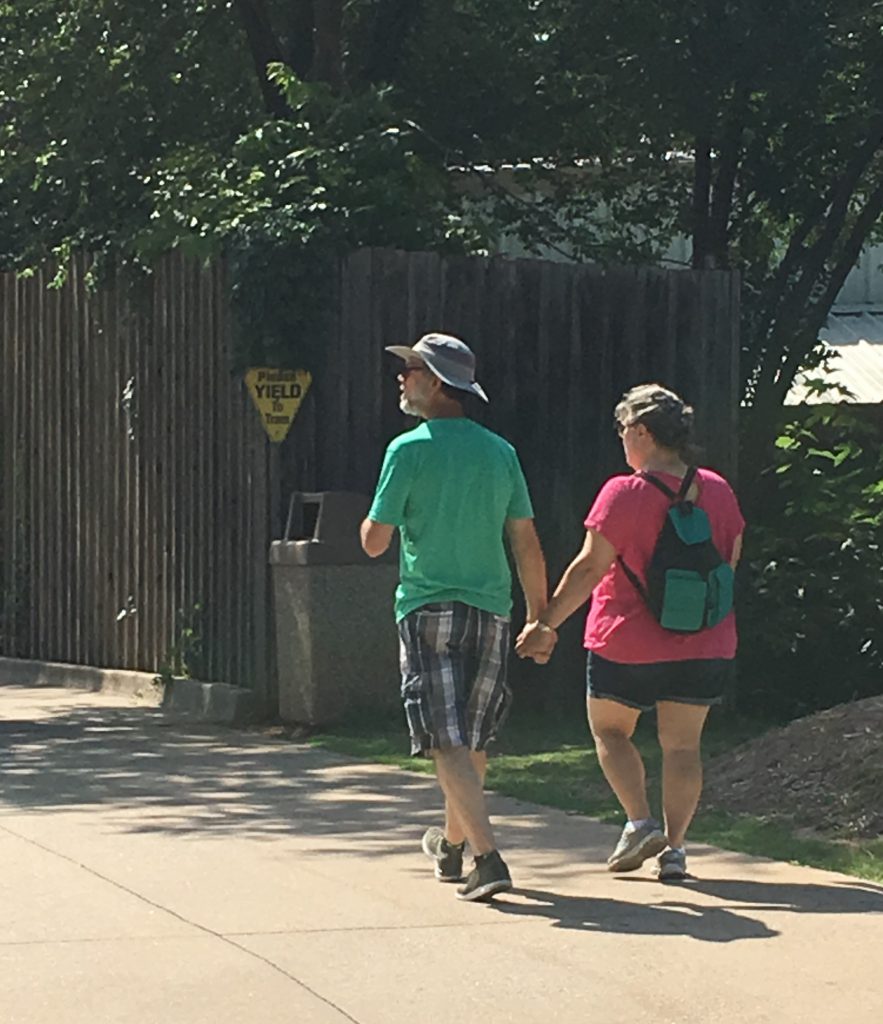 Usually I am at the back of the pack, meandering but it was too hot to move slowly.

I needed to get from one shade spot to the next.

) Brian even called me out on it at one point in the day.

It was all in fun! 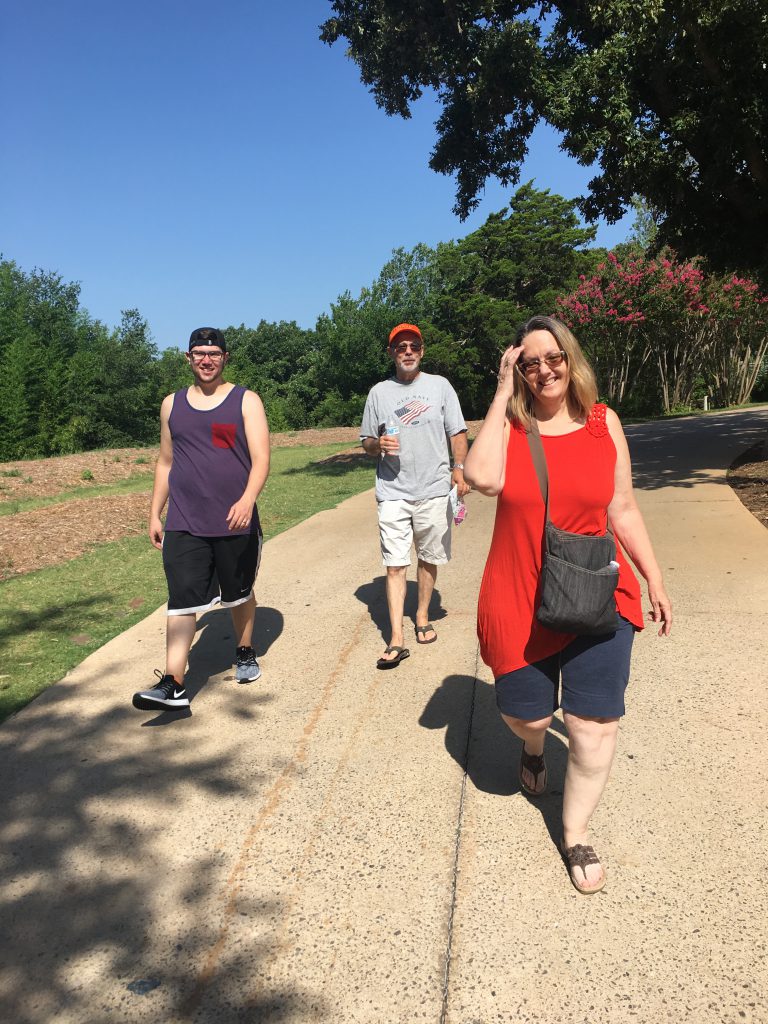 Clearly this was at the start of our day because they still look good and fresh. 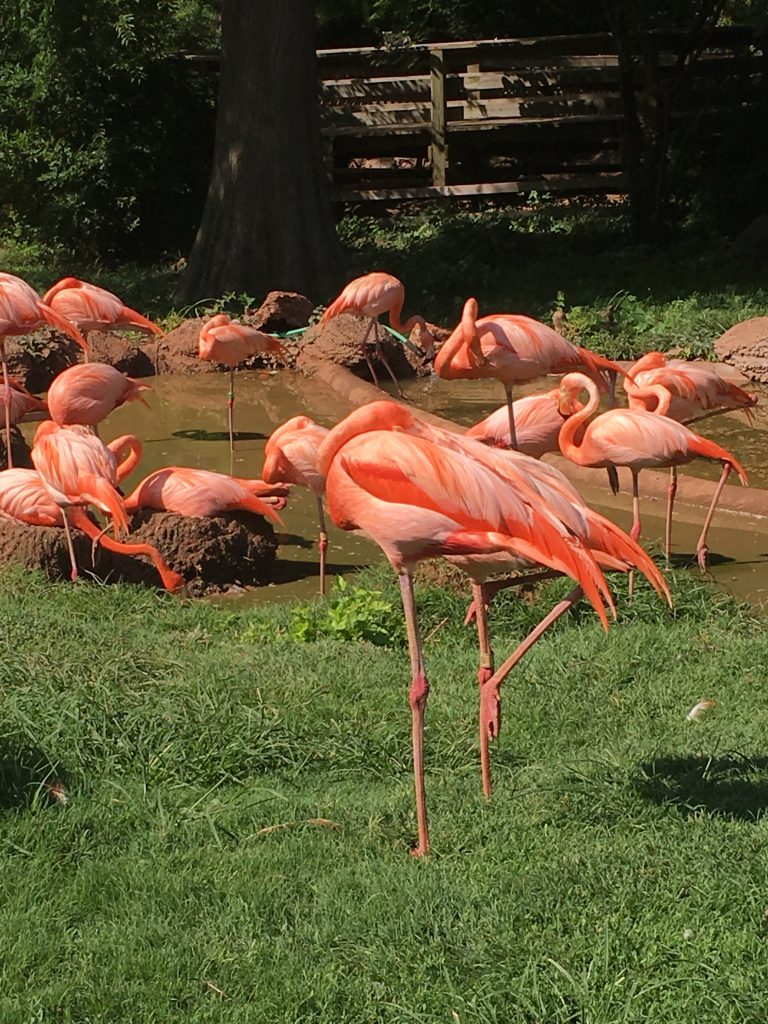 The flamingos were quite loud and scared Liam at first but we ended up back near them several times and even ate lunch across from their area, so he got a bit used to them. By the time we were done with lunch, he even walked over to their fence and was looking at them. We were around them so long we saw that a couple had lain eggs and watched as a few were building their mounds. 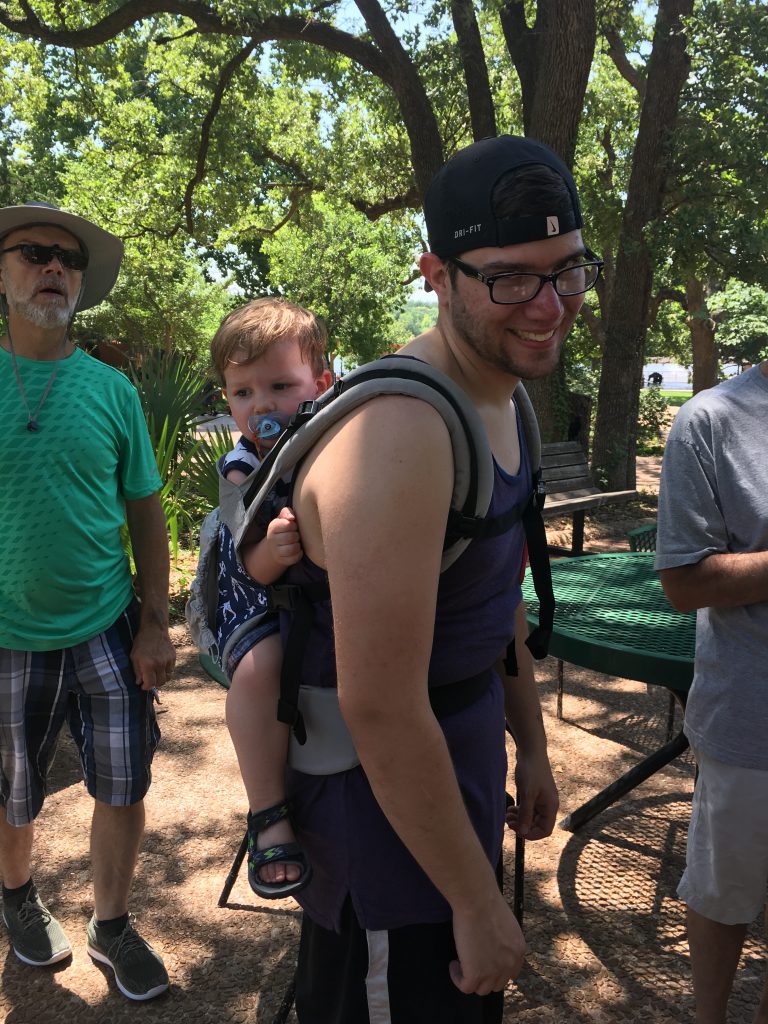 Liam is loaded up in the tula on Brian, not really ready to keep going but we want to see the giraffes and elephants before we leave.

This was an interesting sight! This white peacock spread its tail feathers out and walked about. I think it is an albino because I don’t see any thing but white on it. 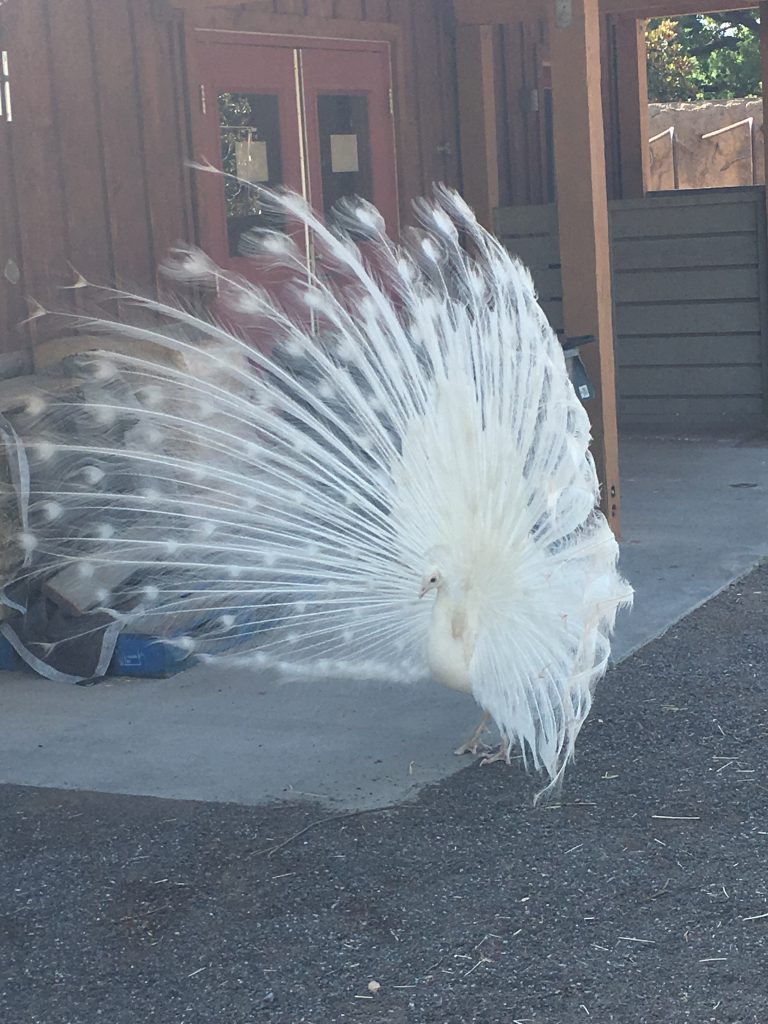 They had some other peacocks too but this was so unique.

Brian and Lauren have been to the zoo frequently this year and said they hadn’t seen this regal lion before this day. He really was a sight to behold. 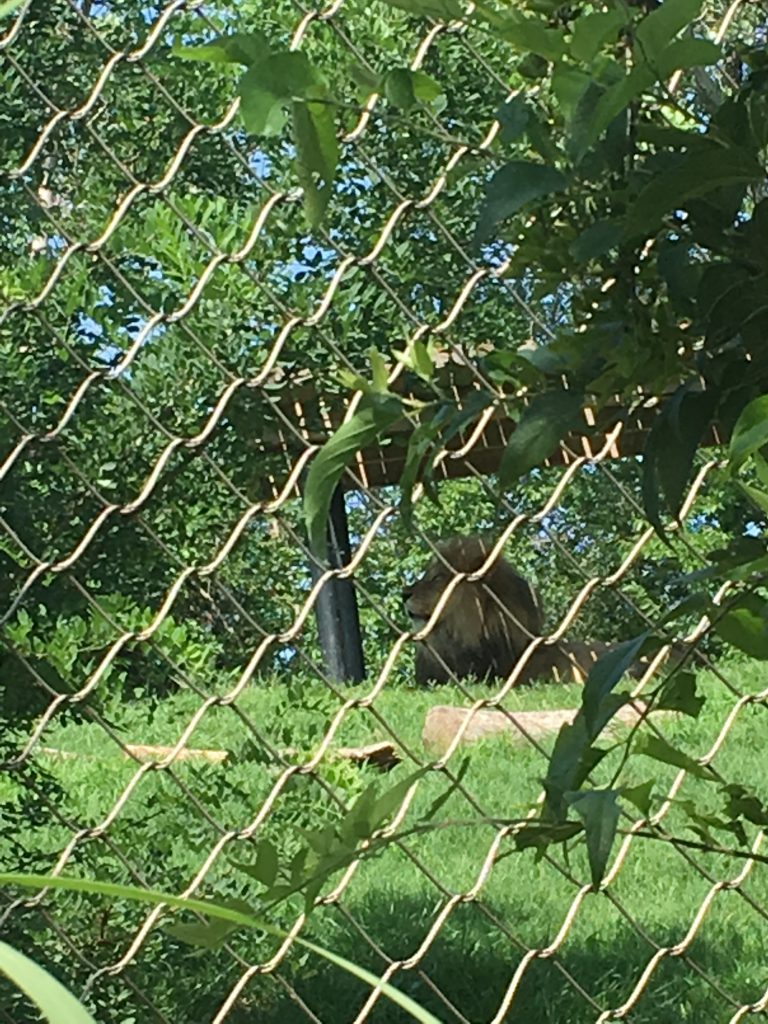 Around the corner, the lionesses were napping by the window, which was really neat. 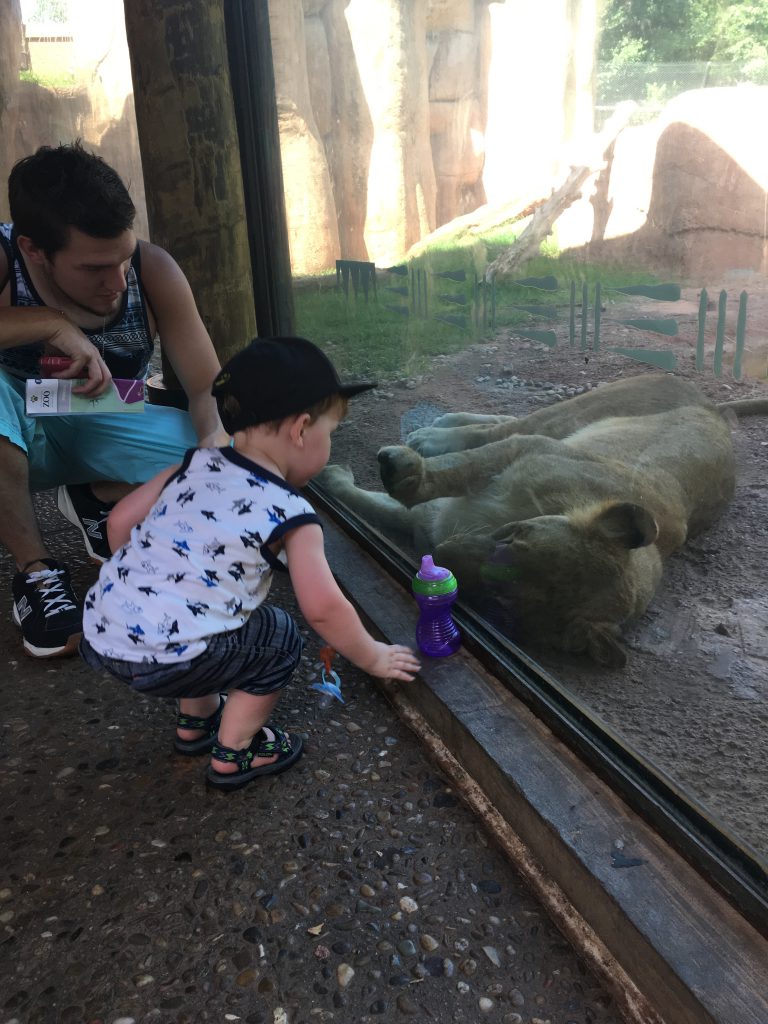 I don’t recall when this was but it was cute and I had to share. 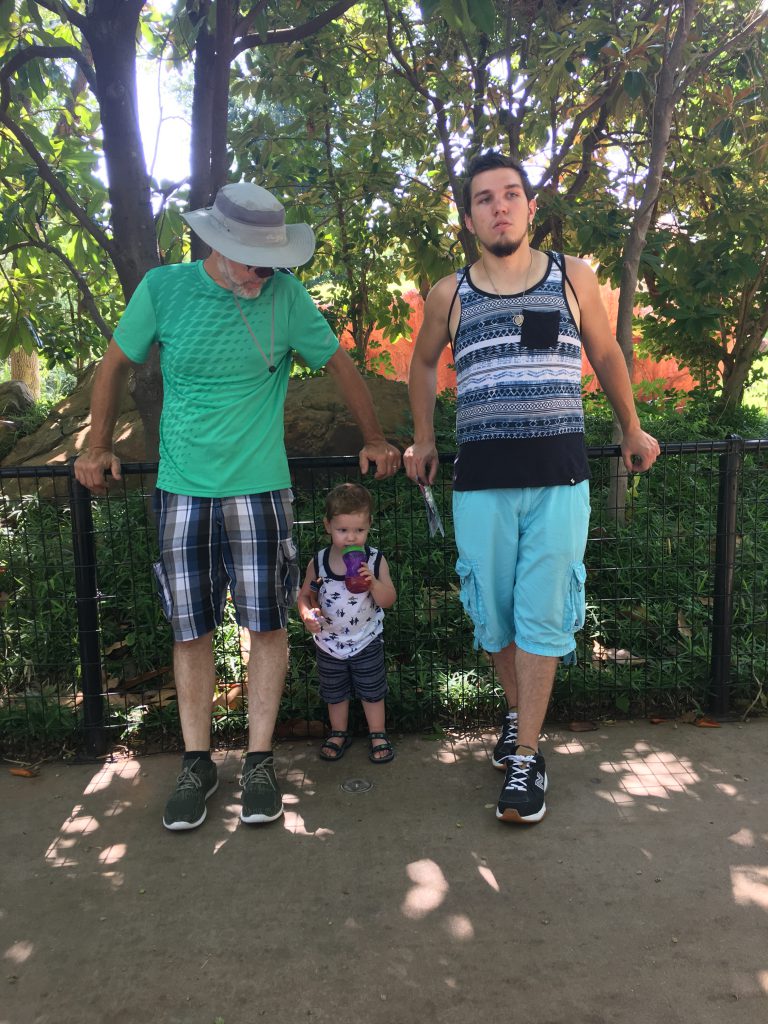 Liam taking a quick rest in the shade with Grandpa and Uncle Sean.

Liam wasn’t in the stroller much but someone caught a picture when he was.

It was HOT and he was tired but wouldn’t stay in the stroller long nor did he take a nap until on his way home, I believe. 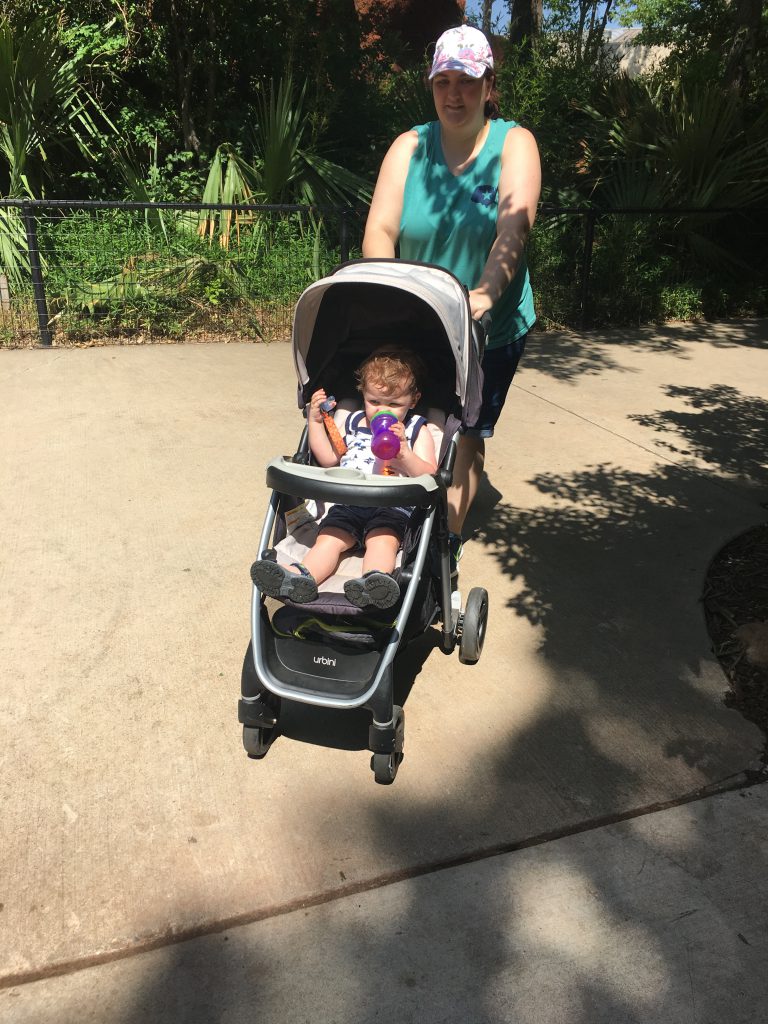 We did have to take a few breaks. This was a vacation after all, not some race. 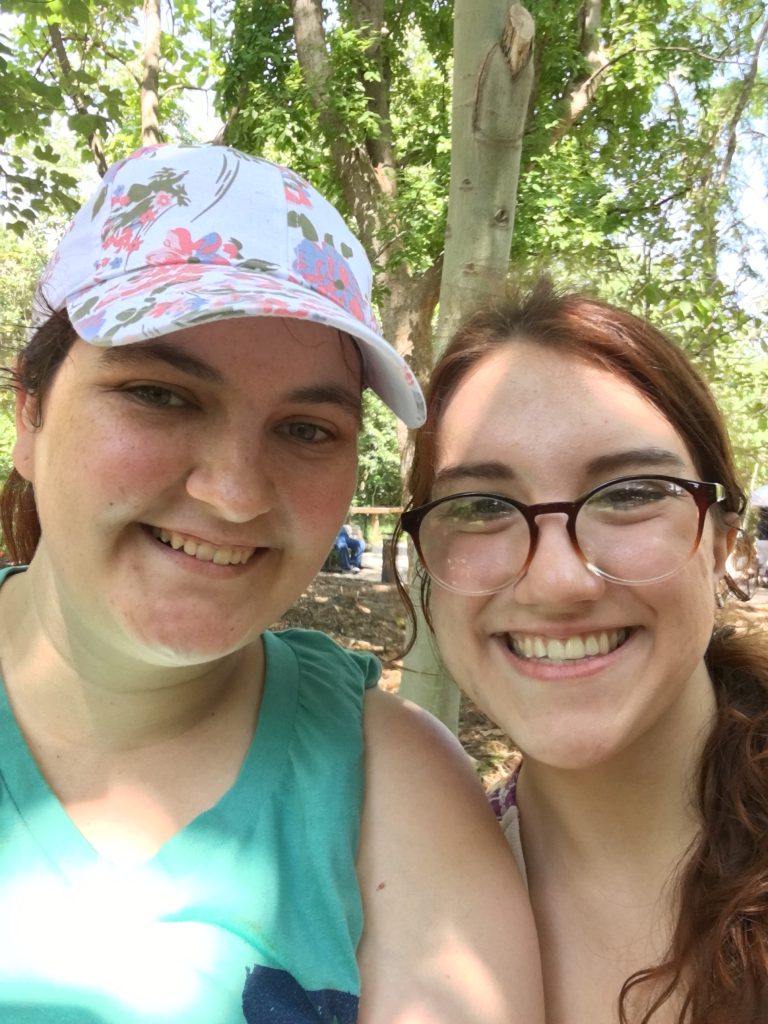 Michael and Paul resting while waiting on the potty break to end. 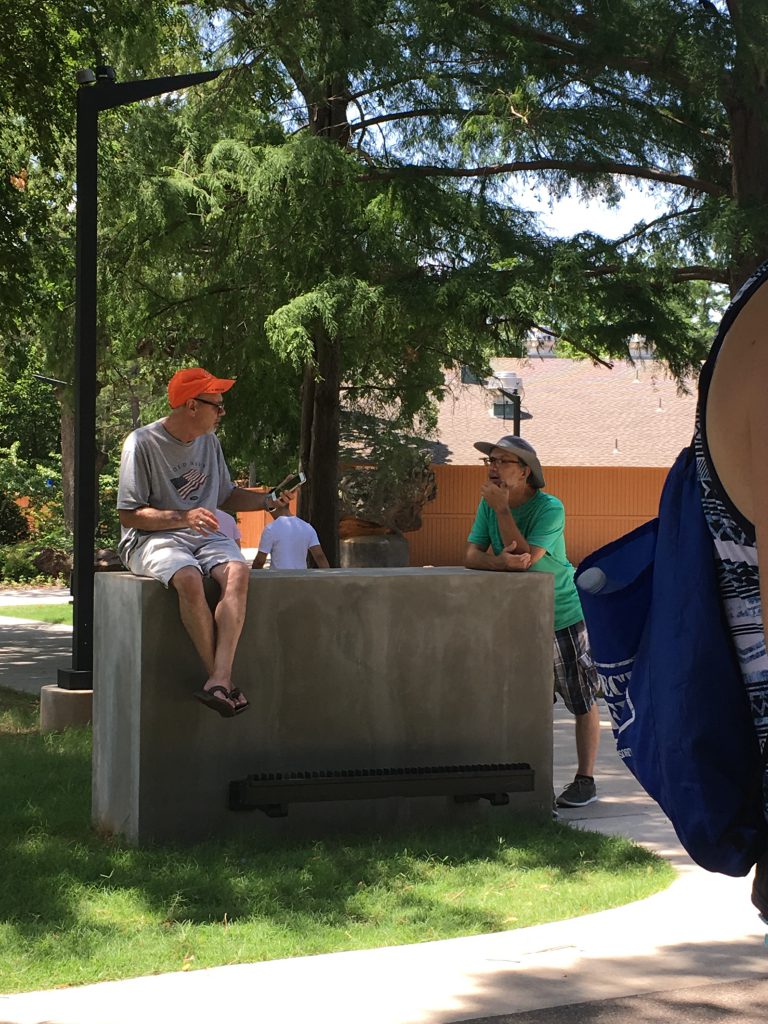 Stephani, me, and Tiffany resting too. 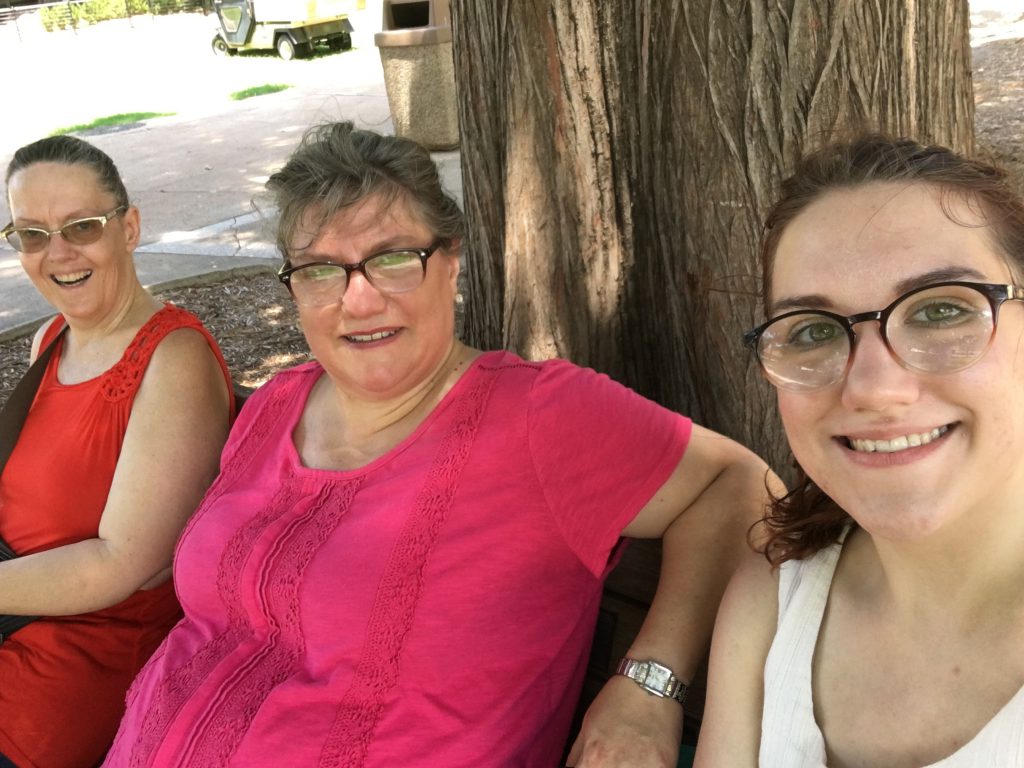 I’d never seen a red panda before. It kind of looks like a fox and raccoon mix. I didn’t expect it to be so long. 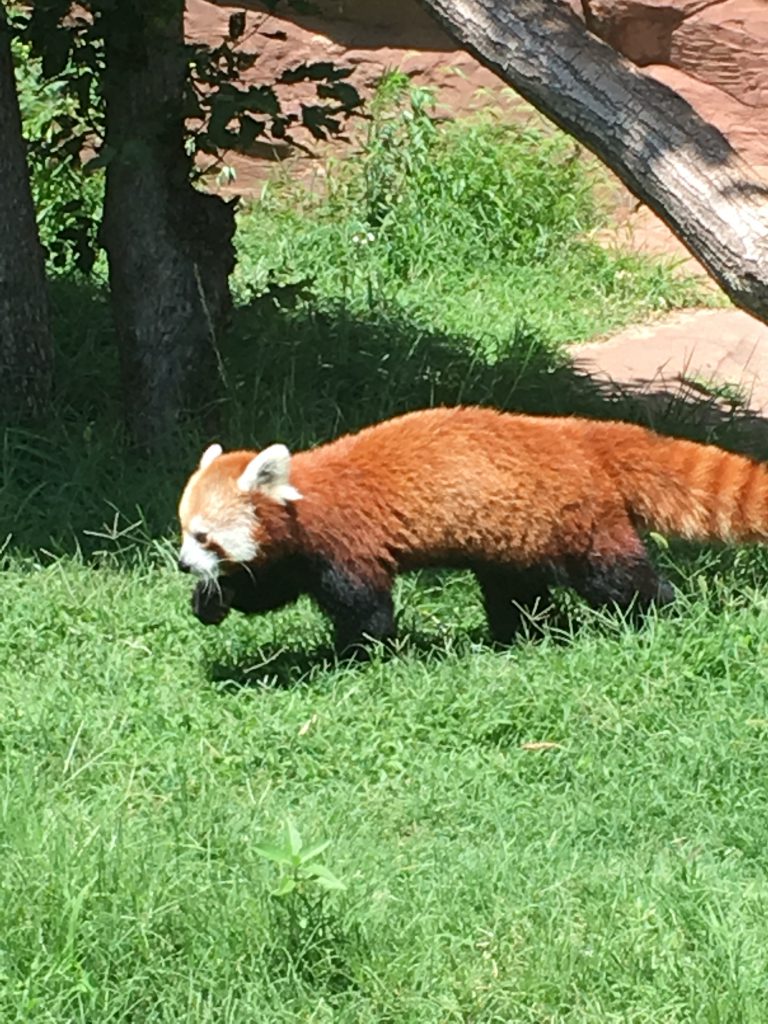 Watching the elephants was one of the highlights of the day. This was not a show, just them going about their day. 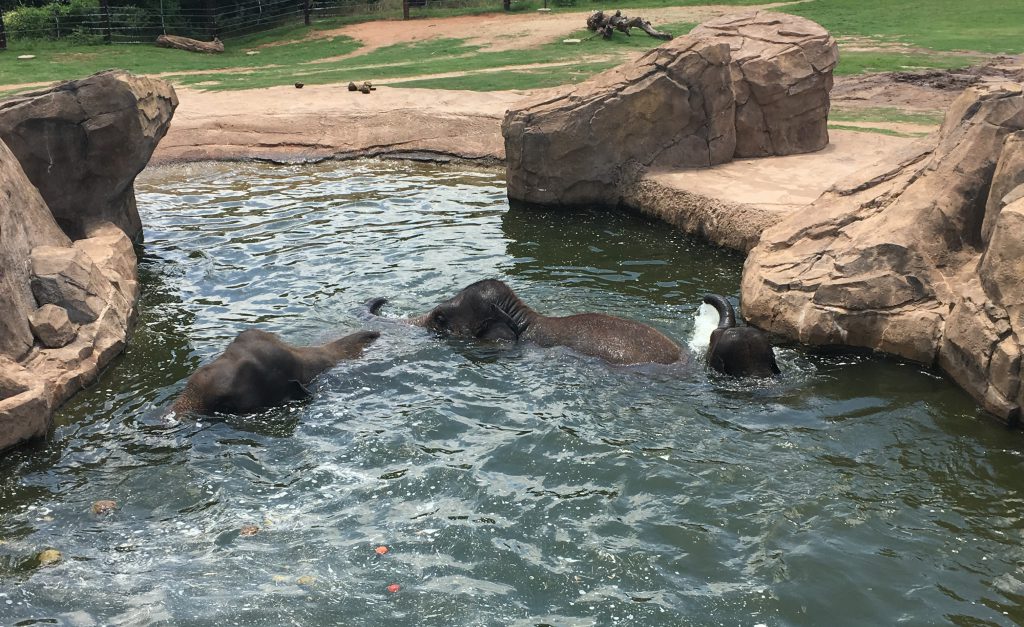 One of them had just gotten an apple off the water surface and eaten it. The baby was cute and it went under water as well. There was another one by itself that we saw eating some straw/hay and rocking back and forth. We even saw it go to its little water area and spray itself down. It was neat to watch them moving around unlike most of the animals.

However, we caught the bears enjoying a watermelon snack break. 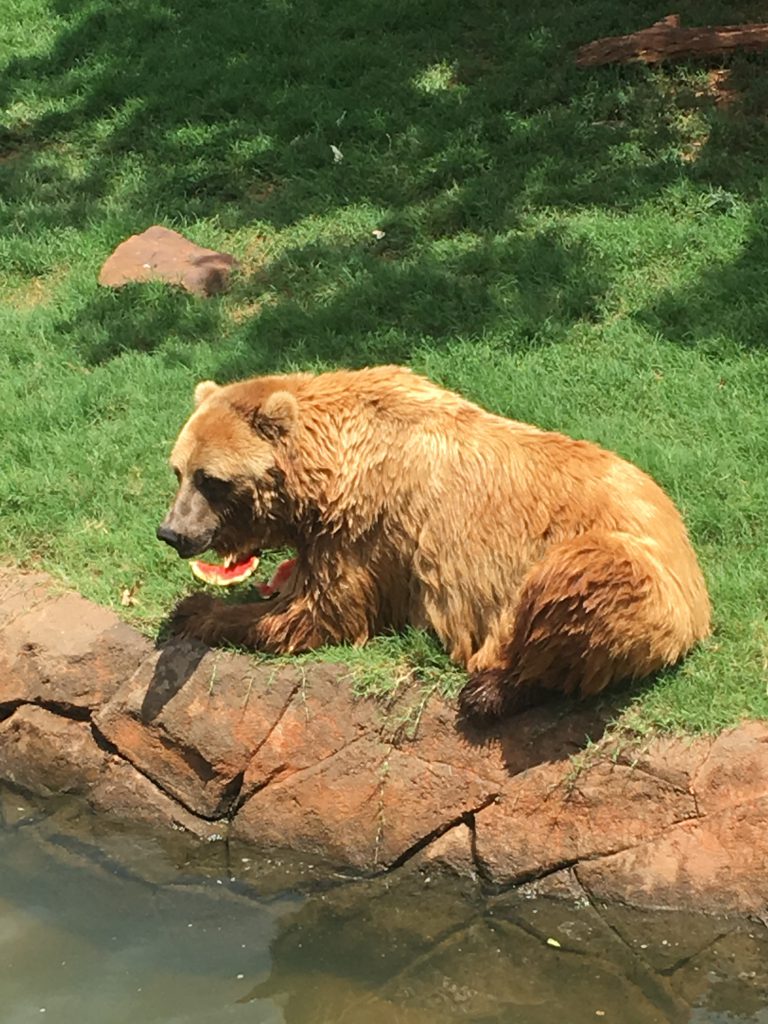 Well, we actually watched them eat the watermelons. I’m sure it was refreshing. I know I would’ve liked a cold watermelon slice about then.

I was a woman with a mission: I wanted to see the giraffes before we left. By the time we finally made it to them, it was the appointed time when you could pay to feed them. But really, you mean to tell me people actually pay $5 to give the giraffe a piece of romaine lettuce?!? It was enough for me to watch the zoo keepers feed them. There was the mama and the girl giraffe that was about 2 or 3 and the little guy who was just a year and a half or so. 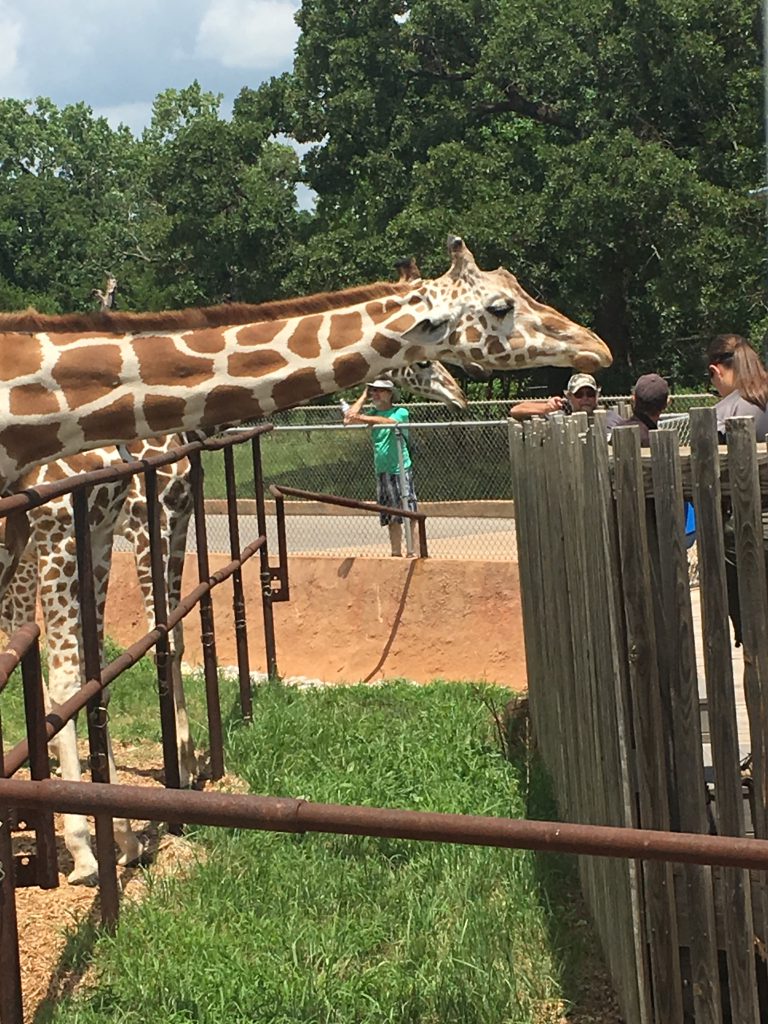 The Okapi were near the giraffes. They are a very interesting animal. They look like they are part zebra, part donkey, and part anteater. 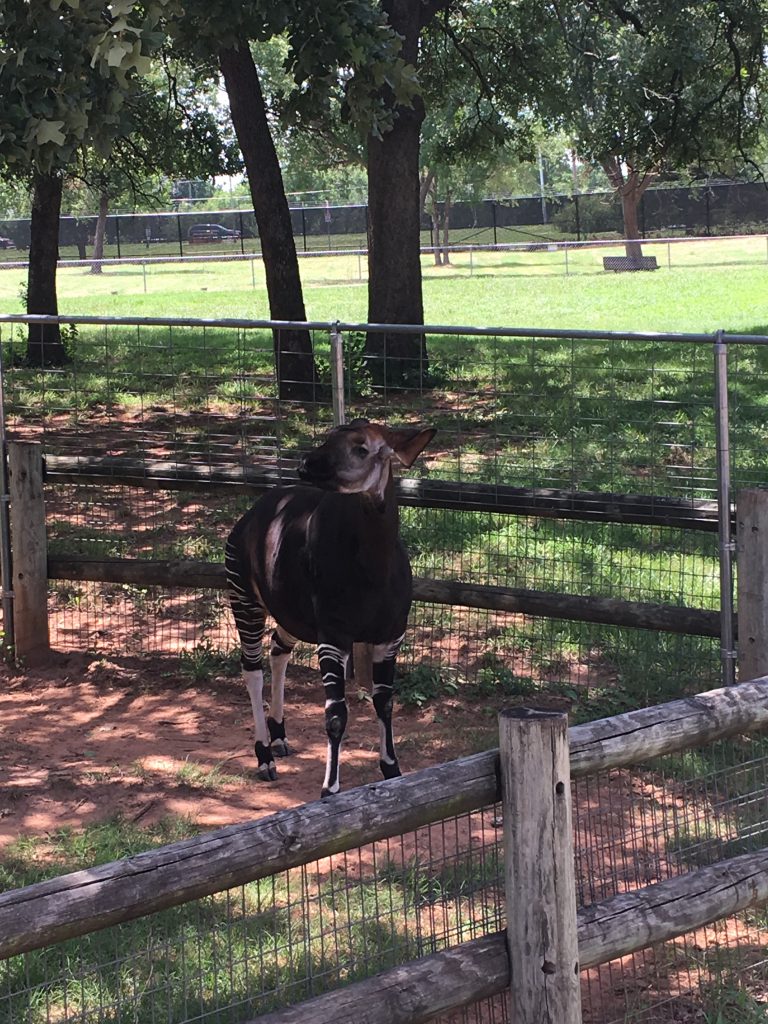 At the end of the day, we were hot and tired but we’d made it! We all left, showered, and napped and then went to dinner together a couple hours later. 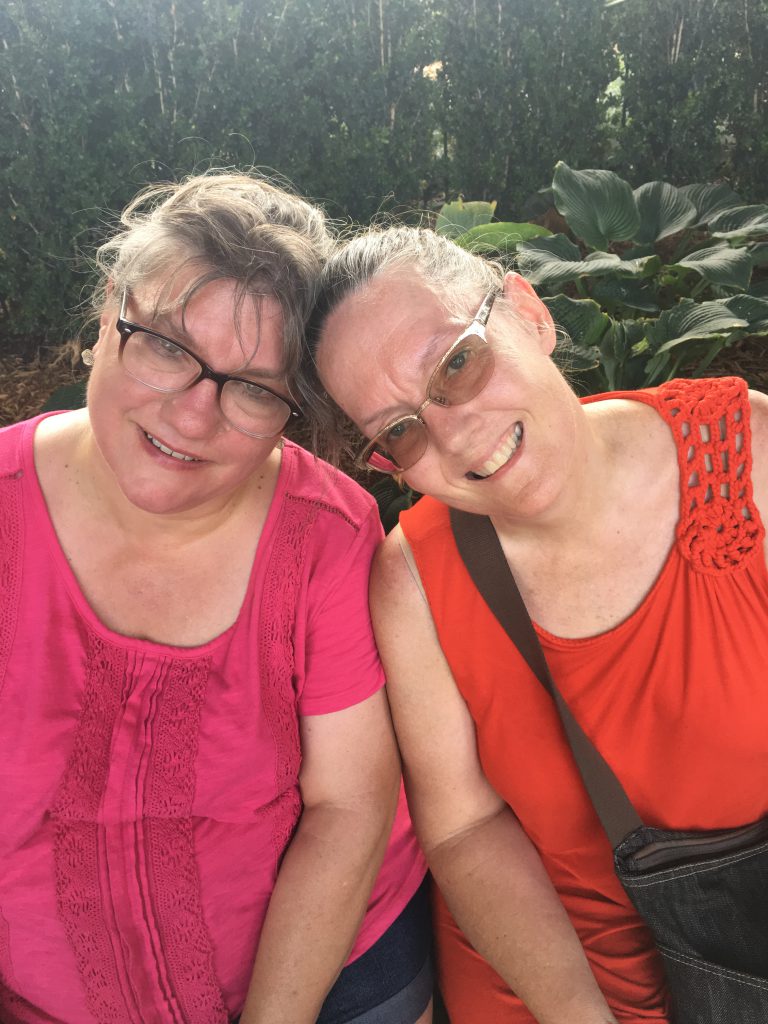 The OKC Zoo touts itself as being a botanical garden too. But I have to say, it was lame at this. Very few plants were labelled and nothing was really marked. There was a butterfly garden that had some interesting plants in it but they were not marked either nor did I see any butterflies. I did recognize sunflowers even though they were not in bloom yet thanks to the ones we’ve grown at home.

So, word to the wise, don’t expect much from the Botanical Gardens aspect of the OKC Zoo and you should enjoy it better.

Well, this has gotten long, so I’ll share more next week.