I found a website that is offering two free studies this summer. They will begin next week.

The first is a study on backyard bugs. Go here for a description and to sign up. I think it looks really interesting and wish it’d been available when my bug-loving boys were little.

The second is Summer Stargazing for Families. I actually signed up for this one and intend to “play along”. It’ll be fun to get Michael’s laser out and share this with my family, even though we are all adults now.

Go here for a description of the “course” and to sign up.

I hope you’ll check these out and have some interesting endeavors this summer!

I got my grandson the Duplos, that Lauren put on his birthday list, when I ran errands a couple of weeks ago. Unfortunately, they were $7 more than what the price was on his list from the Walmart website. Ugh! But I got them anyway. When I talked to Lauren, I mentioned it and she said that it was a different price on site than in store, which made no sense to me. On the way home (Tiff was driving) I looked and it was even $2 less than that. So I ordered it from the site, had it delivered to the store, determined to return it the next week.

I have to tell you, my experience was NOT good.

Tiffany went on to begin gathering the items on our grocery list while I checked in and awaited the package the next week on errand day. I waited about 15 minutes or more and still hadn’t seen anyone.

Finally, I’d had it and asked the next employee walking by how long it should take and she started to look into it when another associate came over and said that they’ve been trying to get them on the phone, that something was wrong with it that day. Well, of course it was, because it was me!

I’m the challenge wherever I go.

Within about a minute a heavyset guy came up to the area, went inside the door nearby and brought out my package. Well, unfortunately my tale does not stop there! I got home and a couple days later opened the box. Inside I found a box with a big crush on one side, completely crimped. I took pictures because I couldn’t believe that I’d returned a perfectly good box and got this one in return. Ugh! 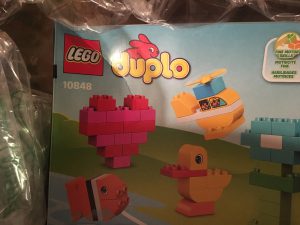 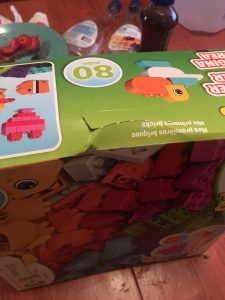 Since I didn’t want another trip into town, I just went with it anyway. I never kept boxes so I don’t  think they will either, opting to put them in a bin for storage.

I then went online and found where to send feedback to the company. Of course I couldn’t tell the whole story because they limit you to a certain number of characters.

Well, Monday morning I got a call from my store’s manager. 8) He wanted to make it right but couldn’t because I’d already given the gift.

He did tell me though that if the situation ever arises again where the price is cheaper on their site (from them, not a third party) that they will comp ad it at the register but of course, they’ll have to get a manager to approve it. So that is nice to know because it happens more often than you’d think.

While I was on the phone I decided to voice my frustration with the lack of cart return thingy on the end parking aisle and was told that although they’ve ordered two new ones to replace the two that got taken out by a storm a few months ago, they won’t be receiving them until the remodel next April. So! Our Walmart will be getting remodeled next spring. Huh. Interesting.

Well, on to the cute part of the weekend. 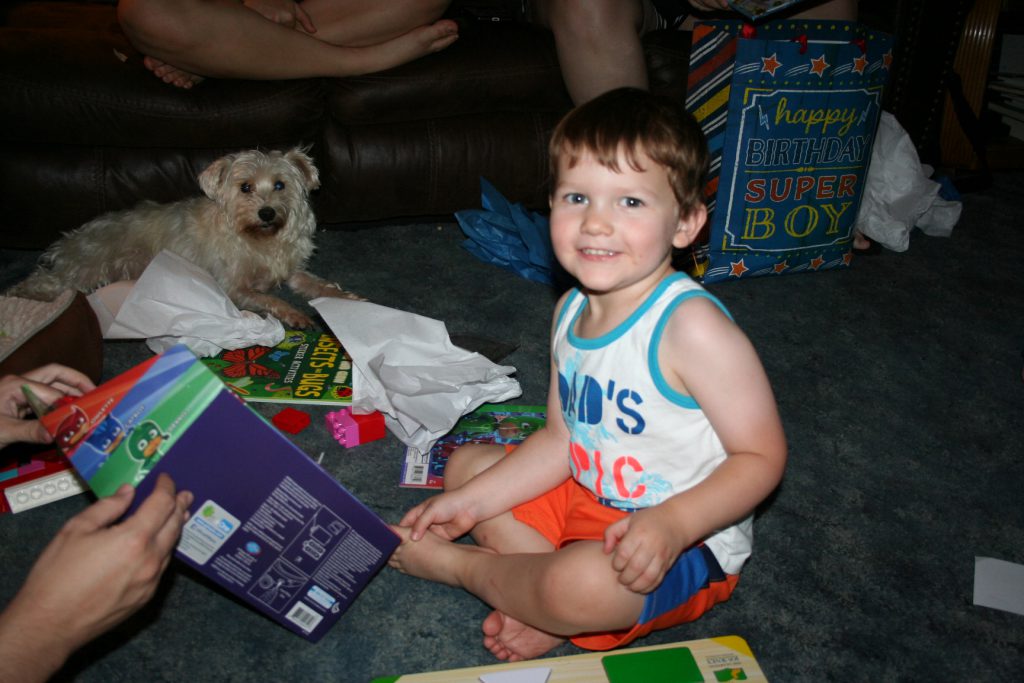 He was opening presents from Michael, Tiffany, Sean, and I. Such a cutie! And has a bundle of energy!!!!! 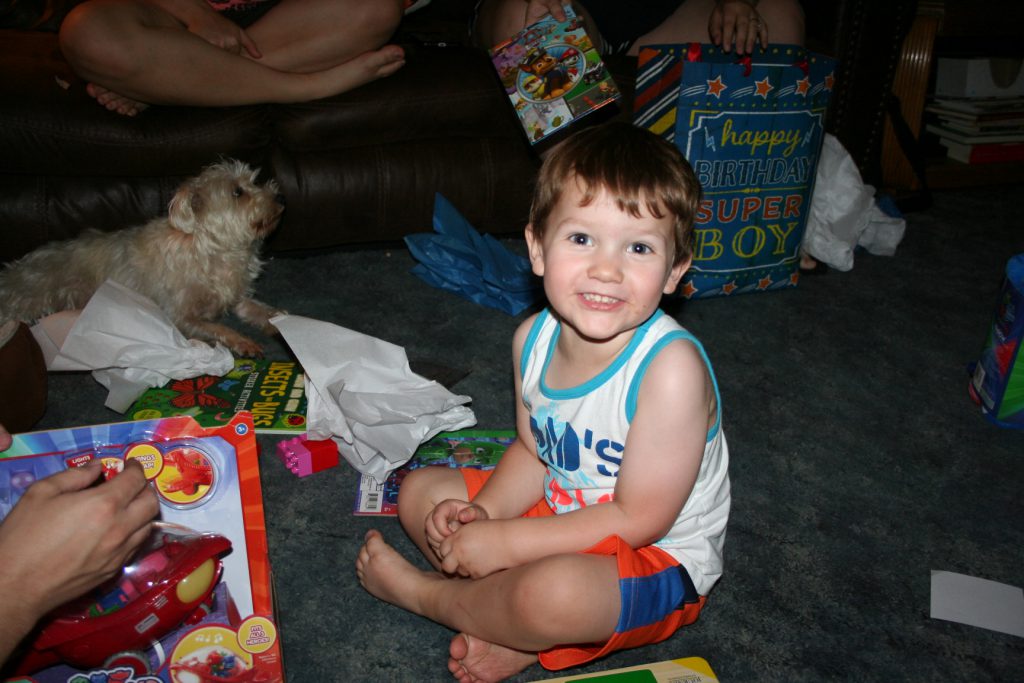 To say he liked his gifts is an understatement. Although I’m sure some of them will be appreciated a bit more at a later time–sorry glow in the dark insect stickers.

He used to love stickers and I thought this was a cute twist on it.

PJMasks and Toy Story are his big favorites right now. He got two or 3 PJ Masks toys and they are already well loved. I didn’t get pictures of him playing with them but he did, right out of the box.

We got a small wading pool for him because it was crazy hot and our air conditioners struggle a bit in the near 100º heat. He loves the outside and water, so this was a huge hit. 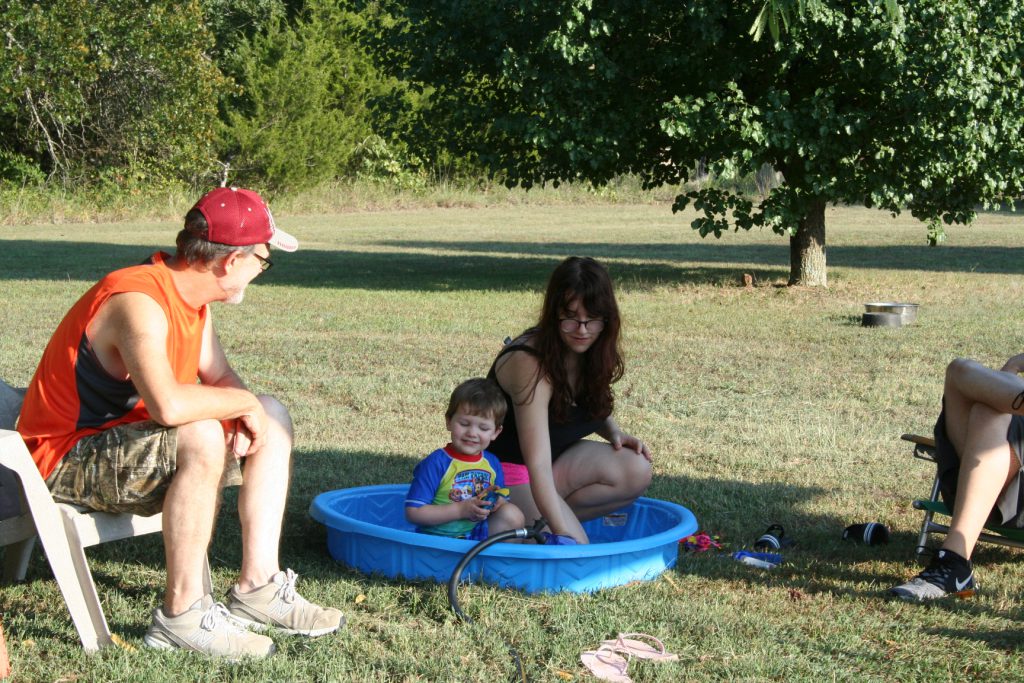 We were going to do a water balloon toss but struggled with getting them filled and with patience. As soon as a balloon was filled, it got thrown. Funny thing was that they wouldn’t burst when they hit people but did when hitting the ground.

It wasn’t too bad when you got wet. I think we’ll get some water guns for next summer.

And maybe a bigger pool. 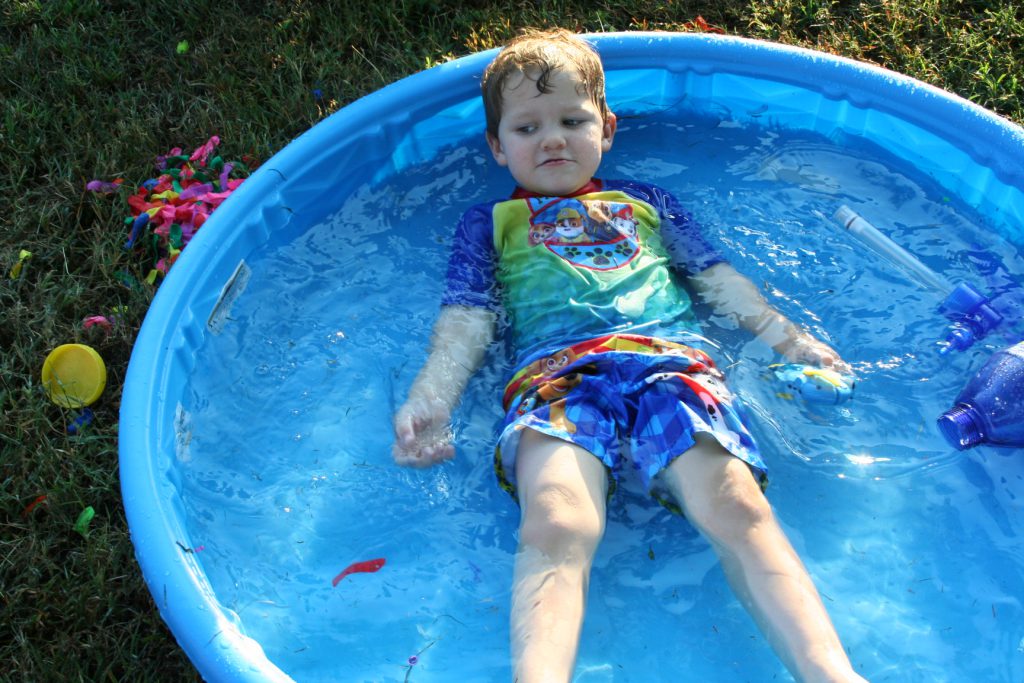 It was a fun weekend. I’ll share more next Friday.

Cool pasta salad with a blend of cucumber, green pepper, tomato, and green onions that I enjoy every summer. It could be eaten year round but, it’s really nice when it’s hot to have this chilled salad. 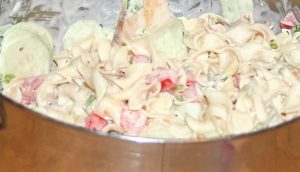 Many, many, many years ago, I was invited to a ladies luncheon. This is one of the items she served and was gracious enough to share the recipe with me. I loved her luncheons. She’d have about 30 ladies there with various tables set up for lunch, which was buffet style. I remember one year in particular, she had about 8 or so different kinds of salads. I’m not a very adventurous eater, so this particular lunch as a bit of a stretch for me.

I was surprised to find that I liked several of the salads and most everything was good. I asked for two or three of her salad recipe that day and this is one of them. I don’t make it very often but when I do, I wonder why I didn’t make it sooner.

Start by boiling 8 ounces of wide egg noodles. When they are al dente, drain them into a colander and rinse with cold water. When drained, place in a large bowl. (FYI: This bowl is NOT big enough.) 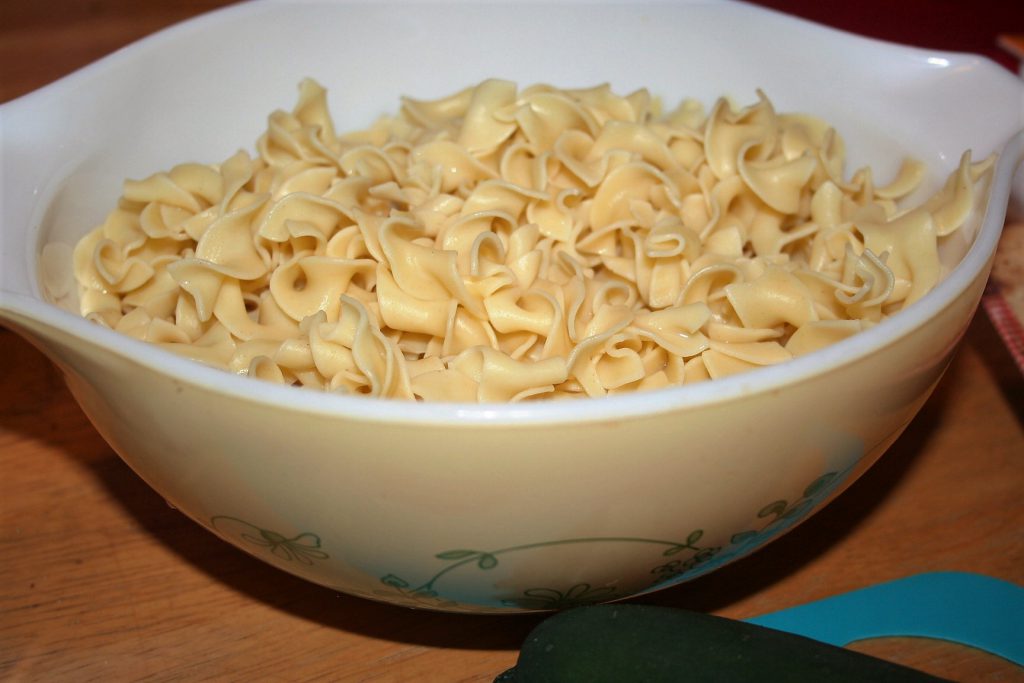 Next peel and slice cucumber. I use my mandolin with the #2 size slicer on it. 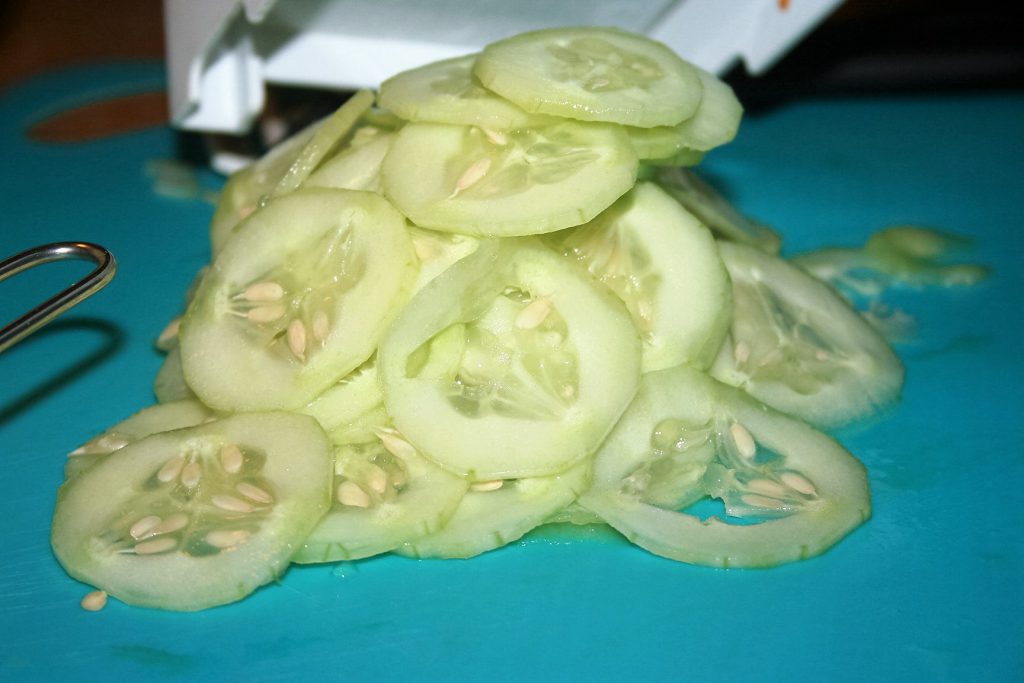 Dice some green pepper. Again, I like mine diced rather small. You’ll need a half cup. 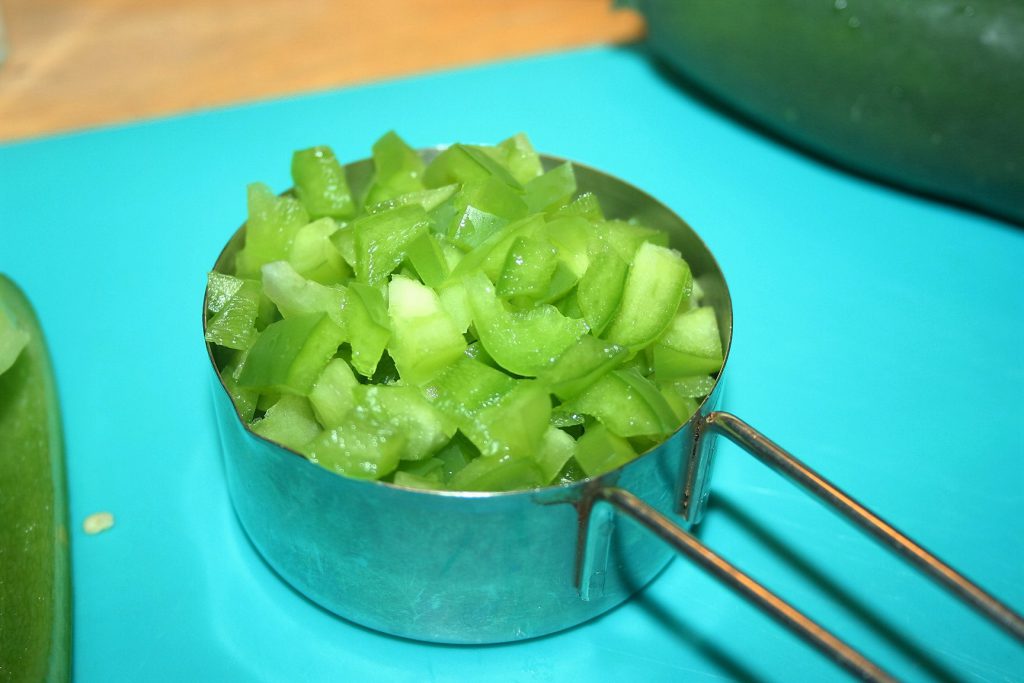 Next slice a green onion. And dice a large tomato. Add these all to the bowl. 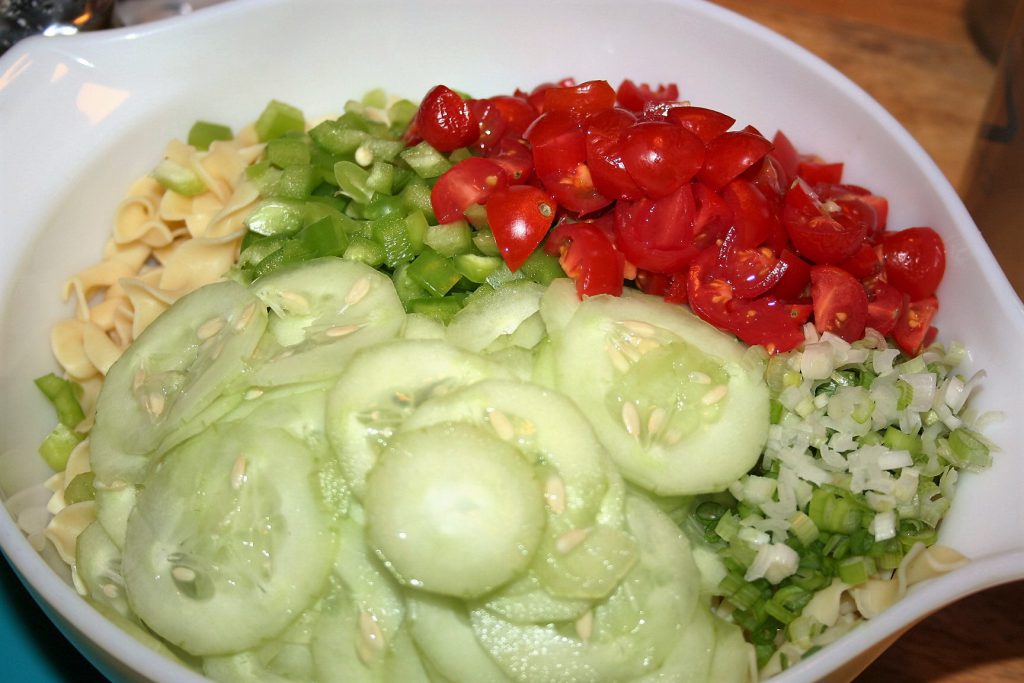 Now it’s time to mix up the dressing. The original recipe called for twice as much but it just seemed way too soupy for us. Also, I’ve mentioned before that I’m not a fan of vinegary or tart foods, so I tend to reduce the amounts of those items to make it more palatable for me.

Combine 1/2 cup Italian dressing, (I like it best when I make the Italian from a packet because I can control the amount of vinegar) 1/2 cup mayo (I prefer Miracle Whip but Mike thinks he prefers mayo, so if you prefer MW, use it and you probably won’t need the added sugar) 1/2 teaspoon prepared mustard, 1/2-3/4 teaspoon sugar, 1/2 teaspoon salt and several shakes of pepper. 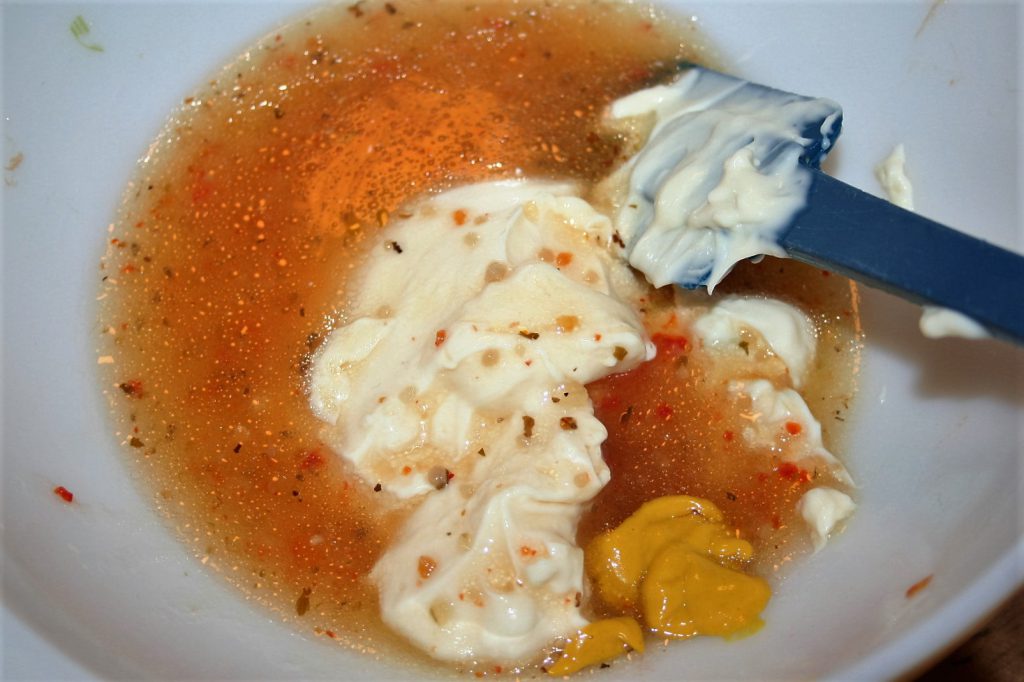 Whisk it all together and pour over pasta and veggies. 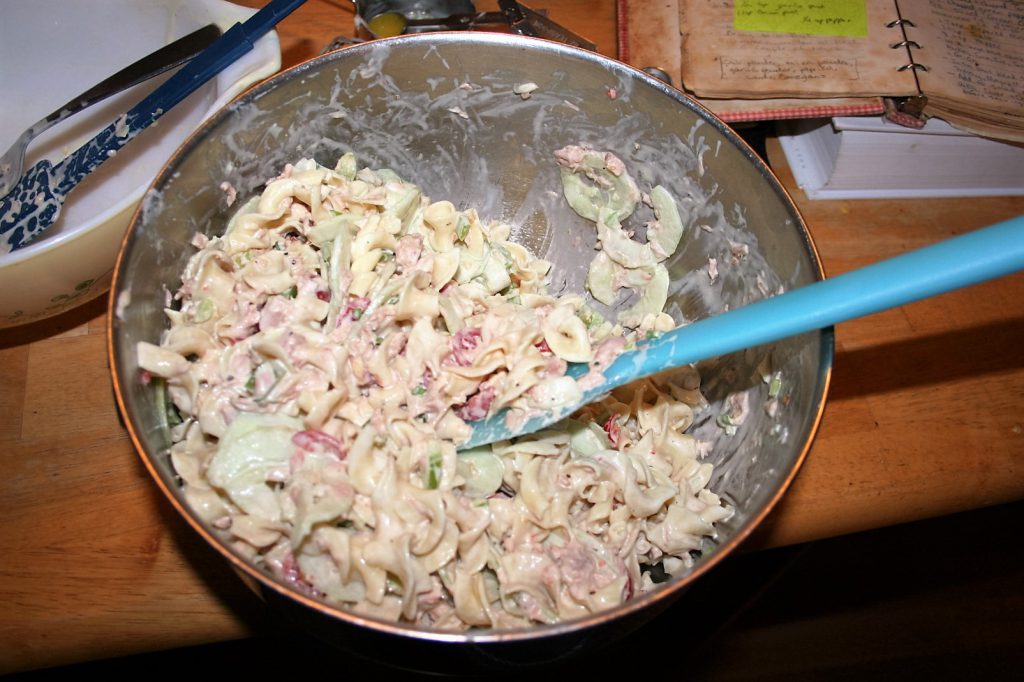 See . . . I couldn’t combine it all in that medium size pyrex bowl.

The original directions said to cover and chill but we usually eat it right away. I like to make this because Sean and Tiffany are too picky and won’t even try it, so Mike and I have it for two or more meals.

I have found that it is hard to take pictures of food that is in the white spectrum. The flash seems to wash it out but it looks dingy without it. I’m going to have to work on how to take the best pictures of white food soon. (I’m thinking I should use my telephoto lens, stand way off, and use the flash, that way I’m far enough away that it doesn’t wash out the food but still looks clear and bright. We’ll see.) In the meantime, here are several pictures that do NOT do this yummy salad justice!!! 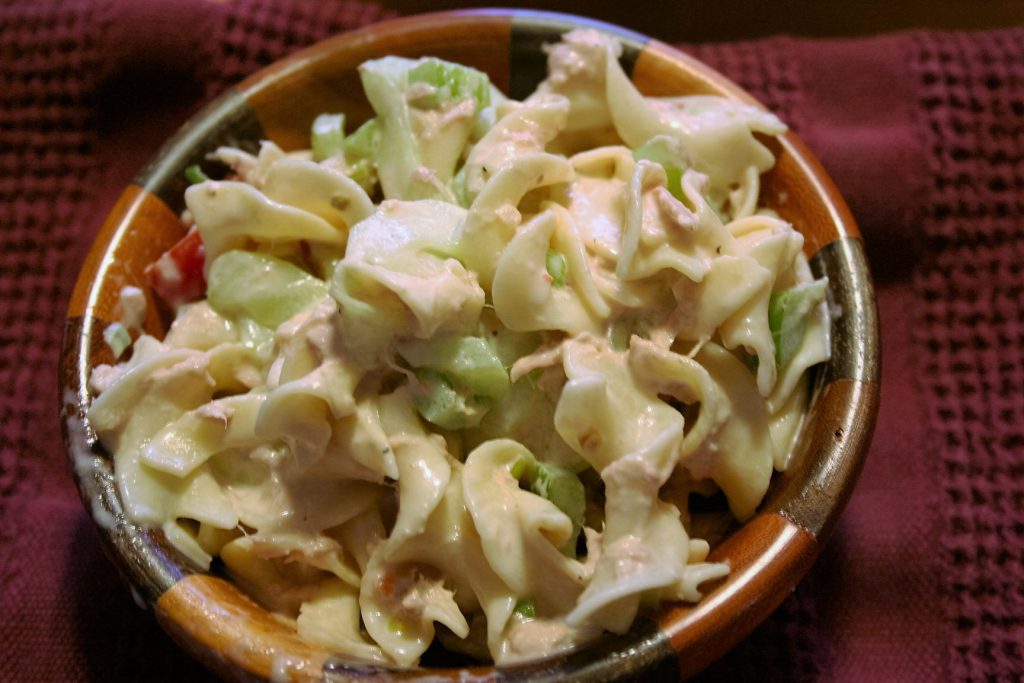 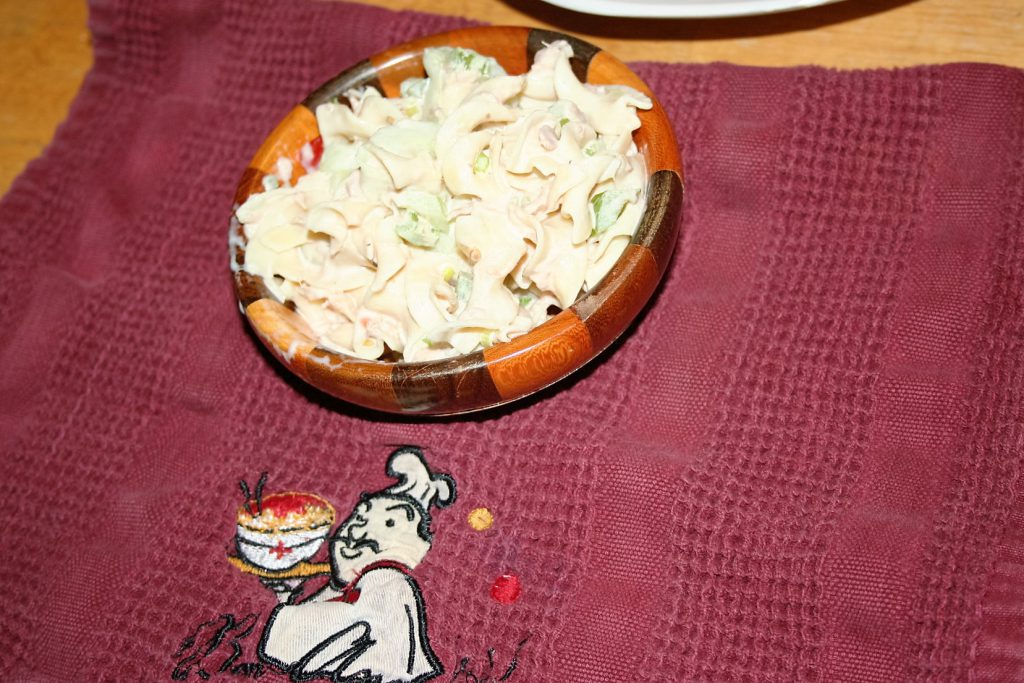 That one just hurts my eyes. 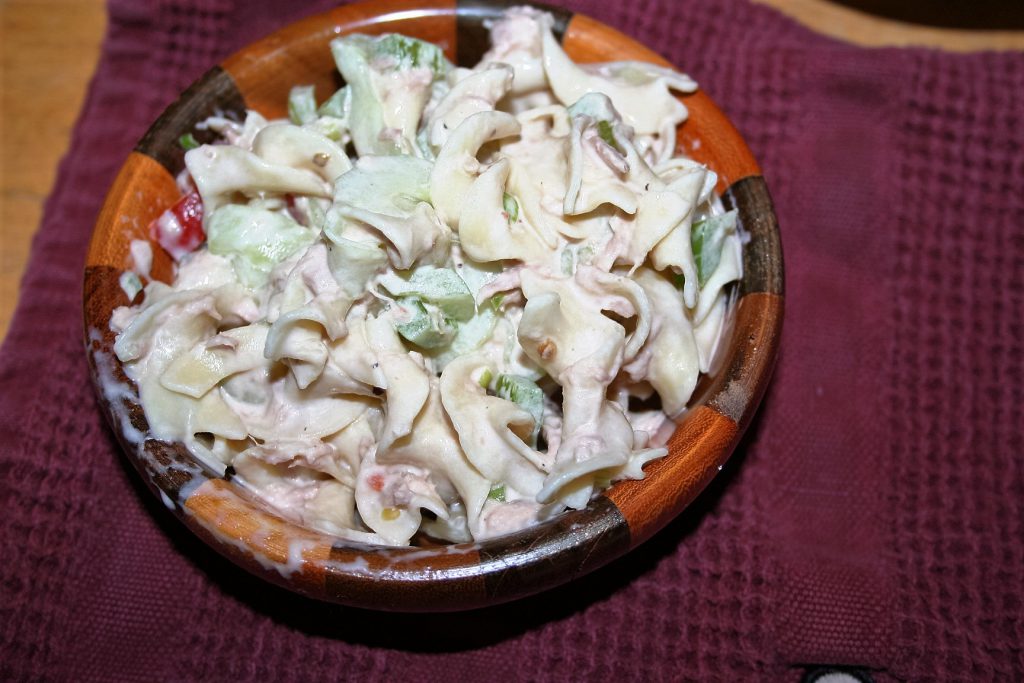 I should’ve pulled some of those tomatoes to the top.

Seriously though, my pictures do NOT do this salad justice. Make it and try it. You’ll like it.

A different kind of salad, good in the summer when corn and tomatoes are fresh. Nice not to have lettuce for a change.

I tried this one a few weeks ago for the first time. I love fresh corn! Thus this salad looked pretty good to me. It is super simple to make as well.

The key here is fresh corn. The first two times I made it with really good sweet corn. This time, unfortunately, it wasn’t as good because the corn wasn’t as good. Oh well. 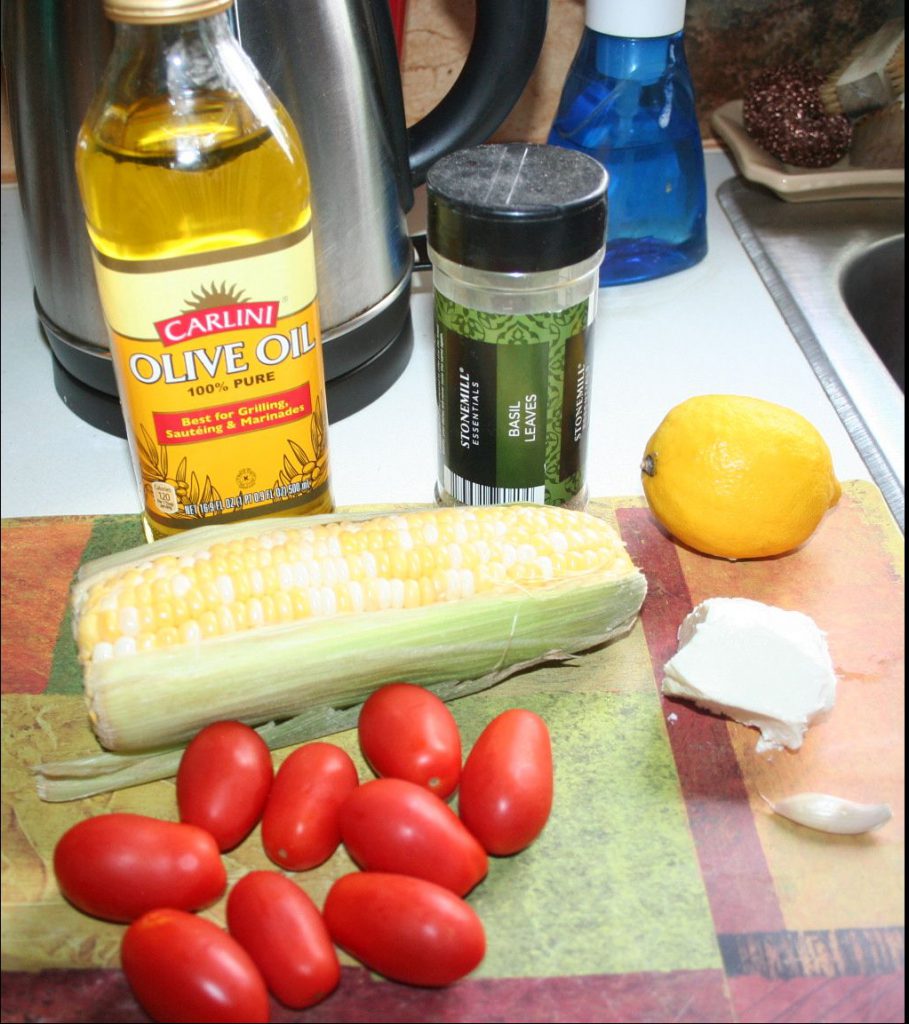 I only made one-fourth of the original recipe today but I’ll give the measurements for the entire batch in the recipe.

First shuck the corn and cut the kernels off the cob. You can cook it first if you like. I recommend you cut a bit off and taste it to see how sweet it is. If it is bland, boil it in some water with some sweetener. I learned this the hard way! 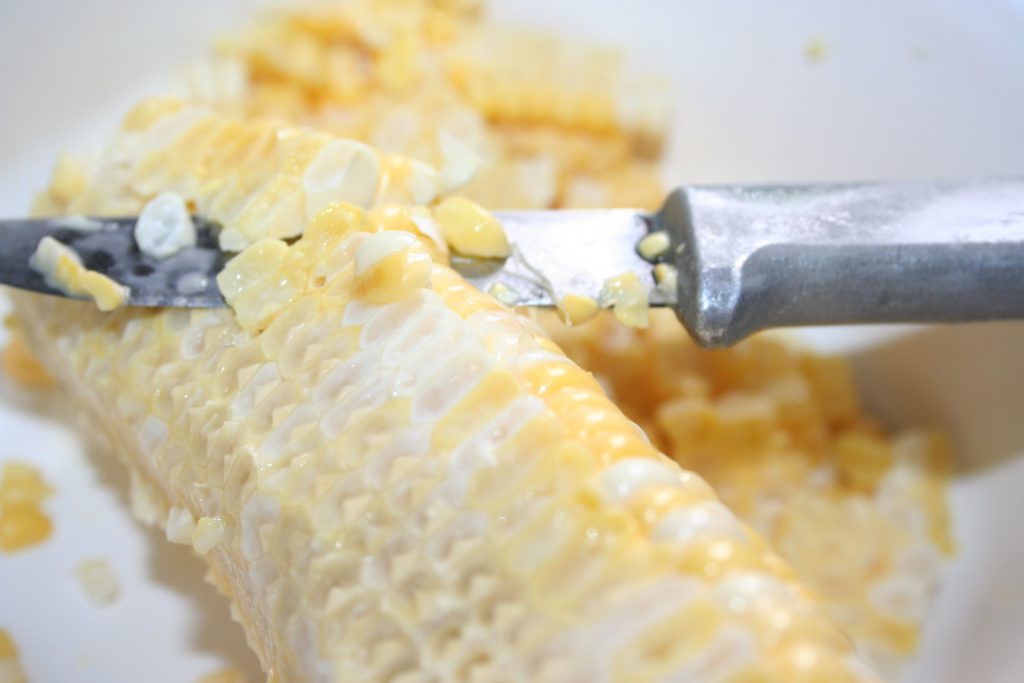 I cut the kernels directly into the bowl I’m going to use to serve the salad.

Next cut the tomatoes. I like small bite-size pieces, so I do more than cut them in half, which is what the original recipe directed. 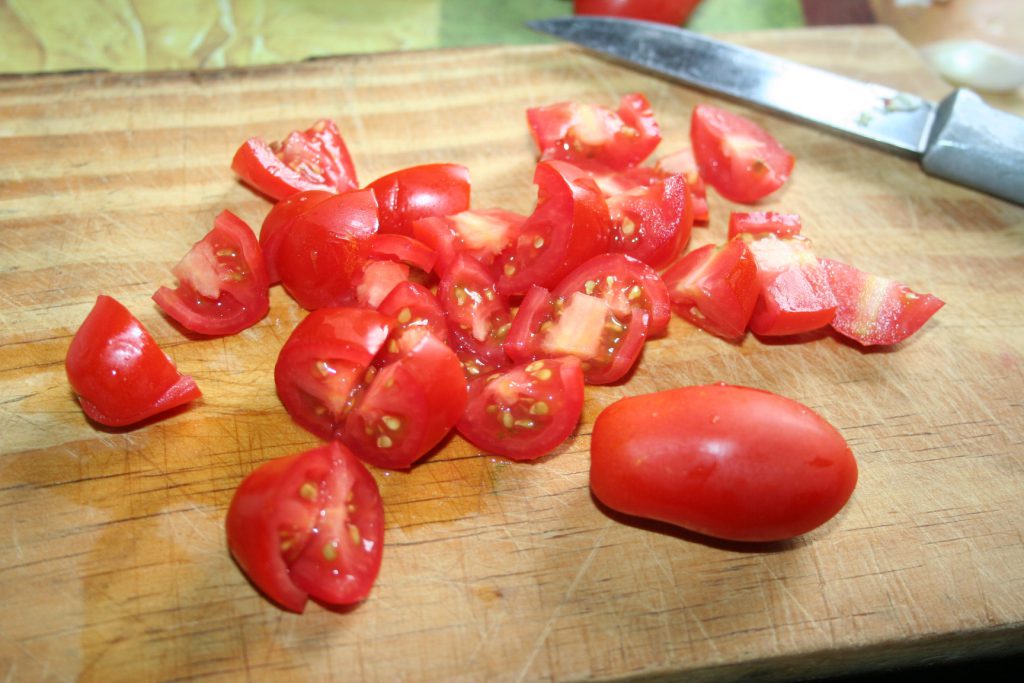 Cut up the mozzarella cheese and then add the rest of the ingredients. I usually cheat and just use a sprinkling of garlic powder instead of the minced garlic. I sometimes use lemon juice from the bottle I keep in the refrigerator for emergencies.

(I have yet to make this with fresh basil though.) 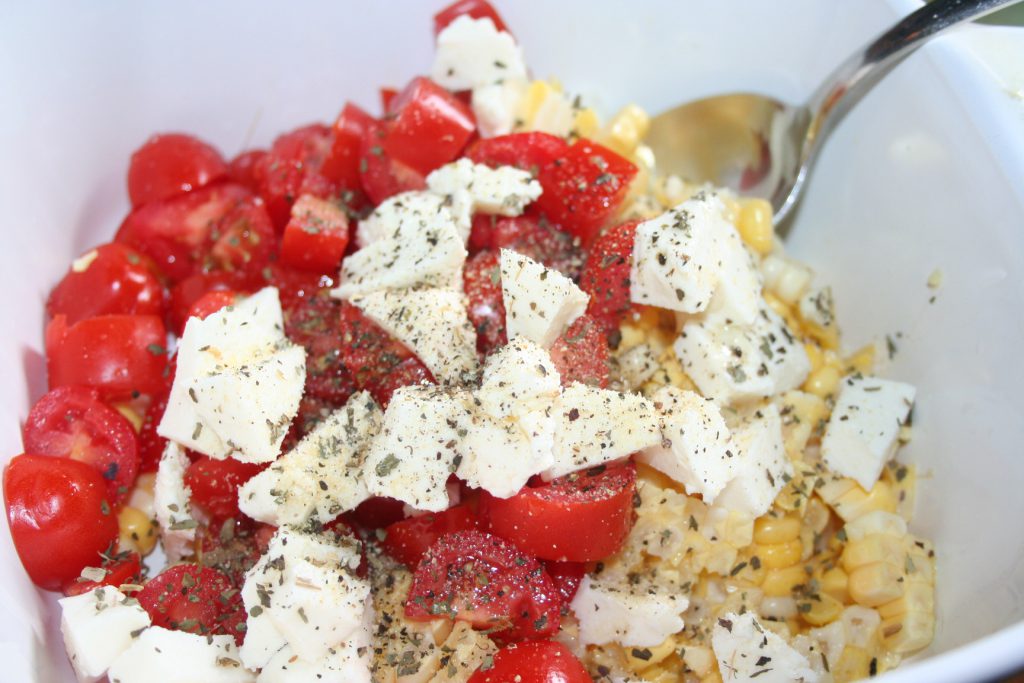 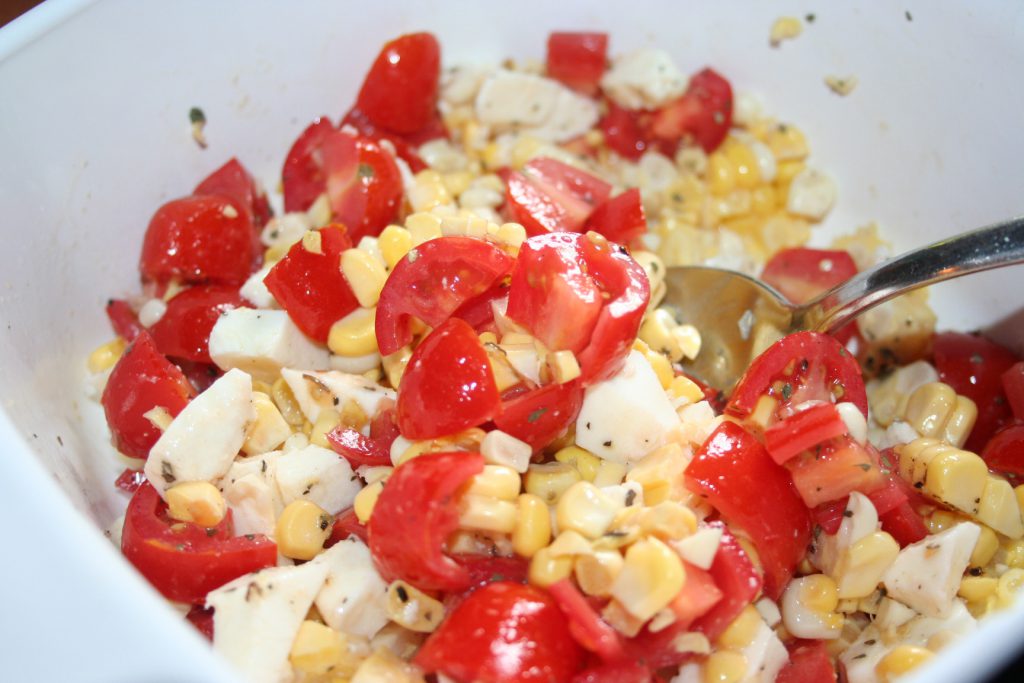 This really is a nice refreshing salad and a nice change from the regular lettuce salads.

I hope you enjoy this one as much as Mike and I have. (Sean and Tiffany won’t even try it.