This weekend I sat down and worked out a schedule to do these step-outs and tiles throughout the week instead of at the last minute the day before this post is up. Since my post comes out on Wednesdays, I’ll use that as my first day. My plan looks something like this:

This week’s tangles were Amaze (aka Stiritup), Bucky, Cyme, Dewd, Evoke, Floo, and Gust. Amaze is one that I learned years ago and really enjoy it. However Bucky and I are not very good friends.

Cyme is nice but there’s a point that I don’t know exactly where to put the next round of ‘petals’.

There there is Dewd, Evoke, Floo, and Gust. I do not care for Dewd at all. Evoke and Floo seem to be variations/tangleations of Dewd or vice versa. And since I don’t like Dewd, I don’t care for these either.

I never even knew Gust existed. It’s is kind of nice because it is kind of shaped like a bracket with a loop in the middle. I’m not very good at auraing so that is probably one reason why I don’t care for these tangles.

So, here is the string. 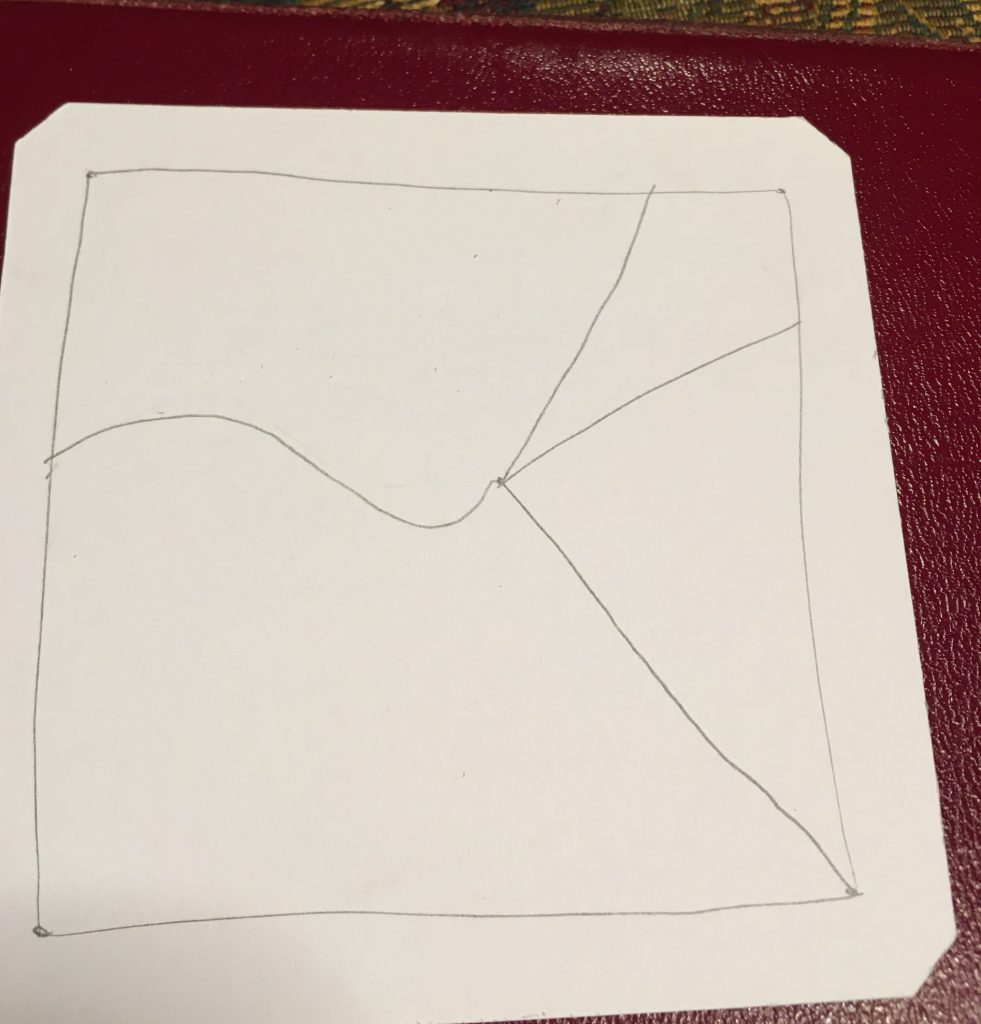 Since I enjoy Amaze, I knew I wanted to include it in this tile. Cyme seemed like a good fill for the bottom section. And of the remaining ones, Gust is my favorite, so it will be used too. I decided that I didn’t need to fill all the sections.

Here’s the scan of the tile after the lineart. 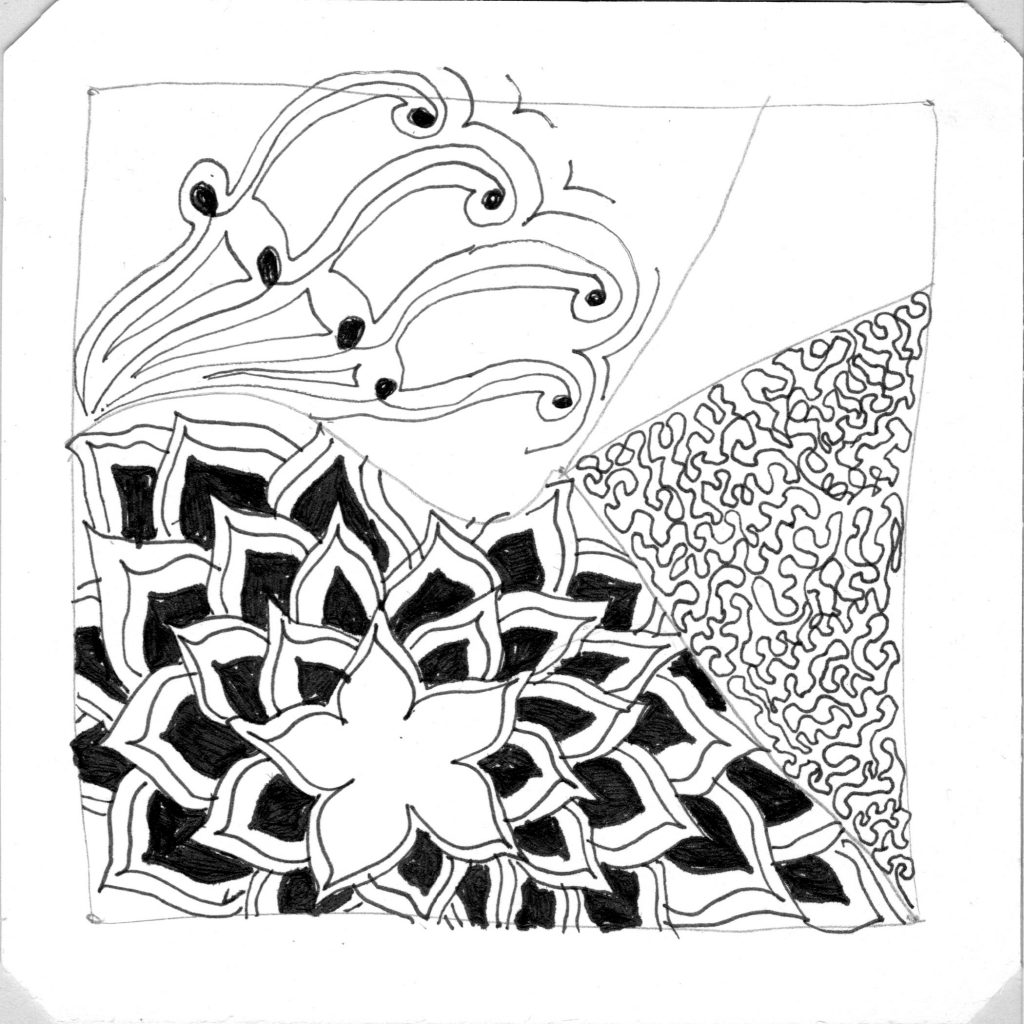 Here is the picture I took outside, although it was overcast, so not much sunlight at all. 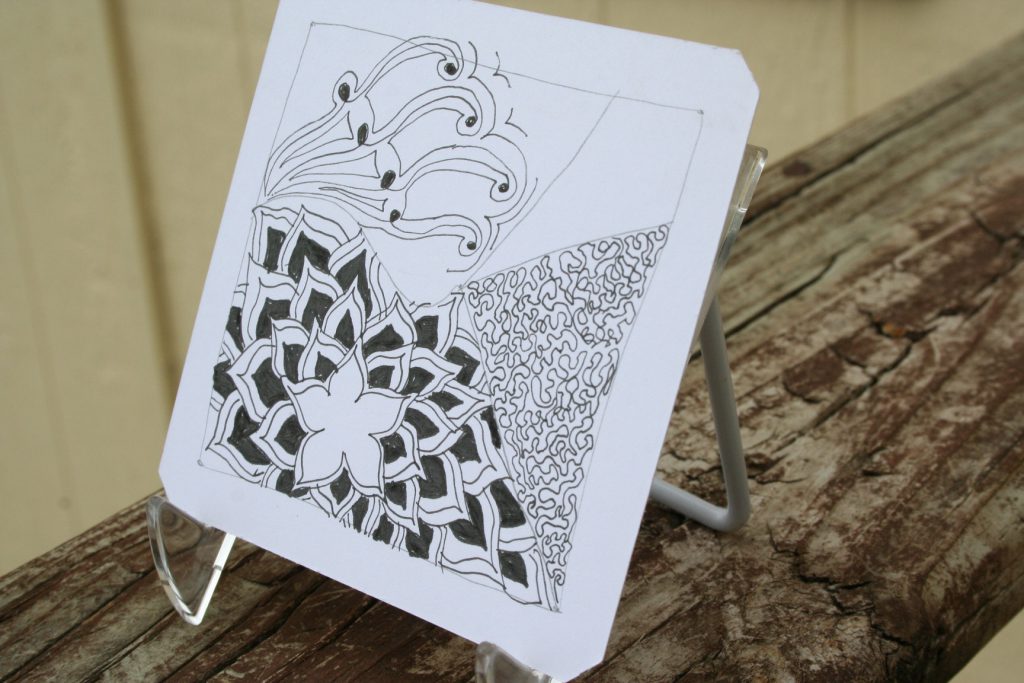 Then I went to shading it. 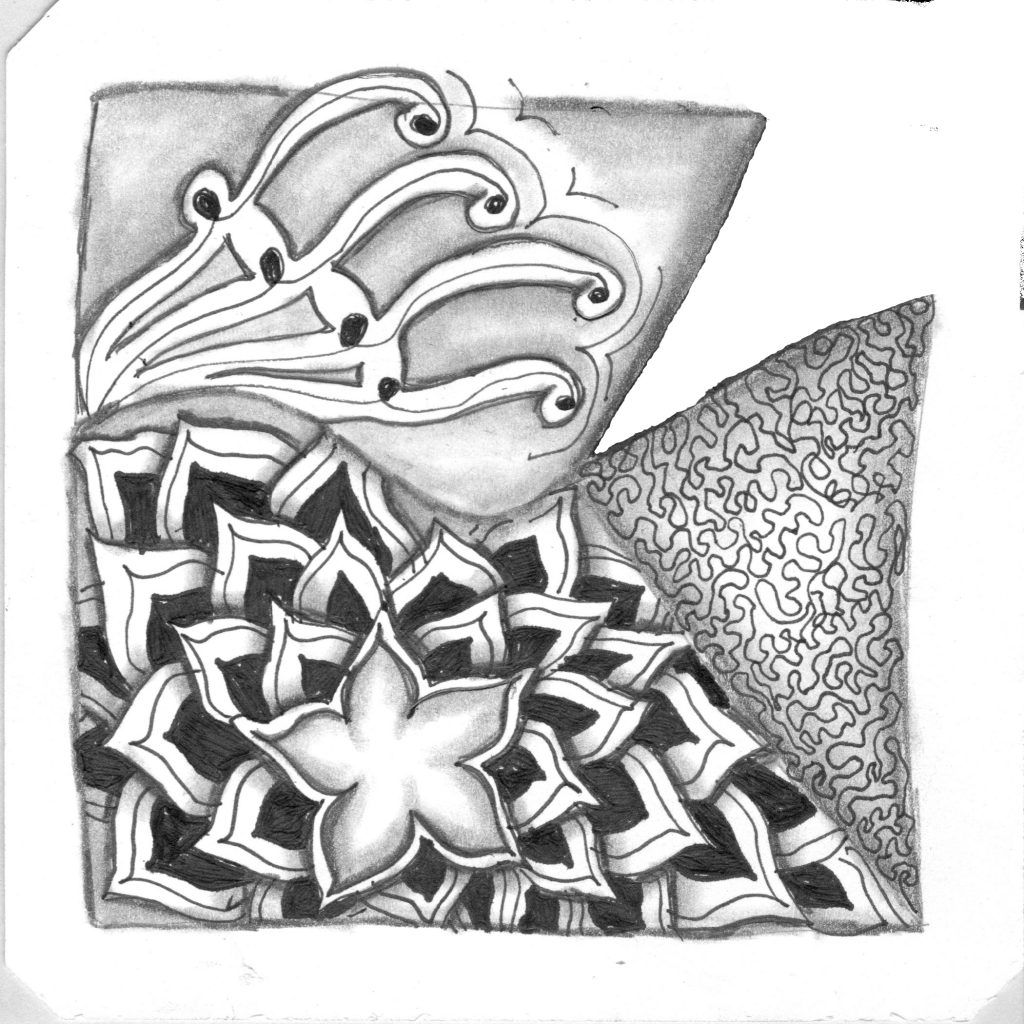 That white section kept nagging at me. I wasn’t sure if I wanted to blacken it, shade it, or leave it alone. I finally decided to blacken it. And it didn’t look quite right, so I flared it out to the edge of the tile. 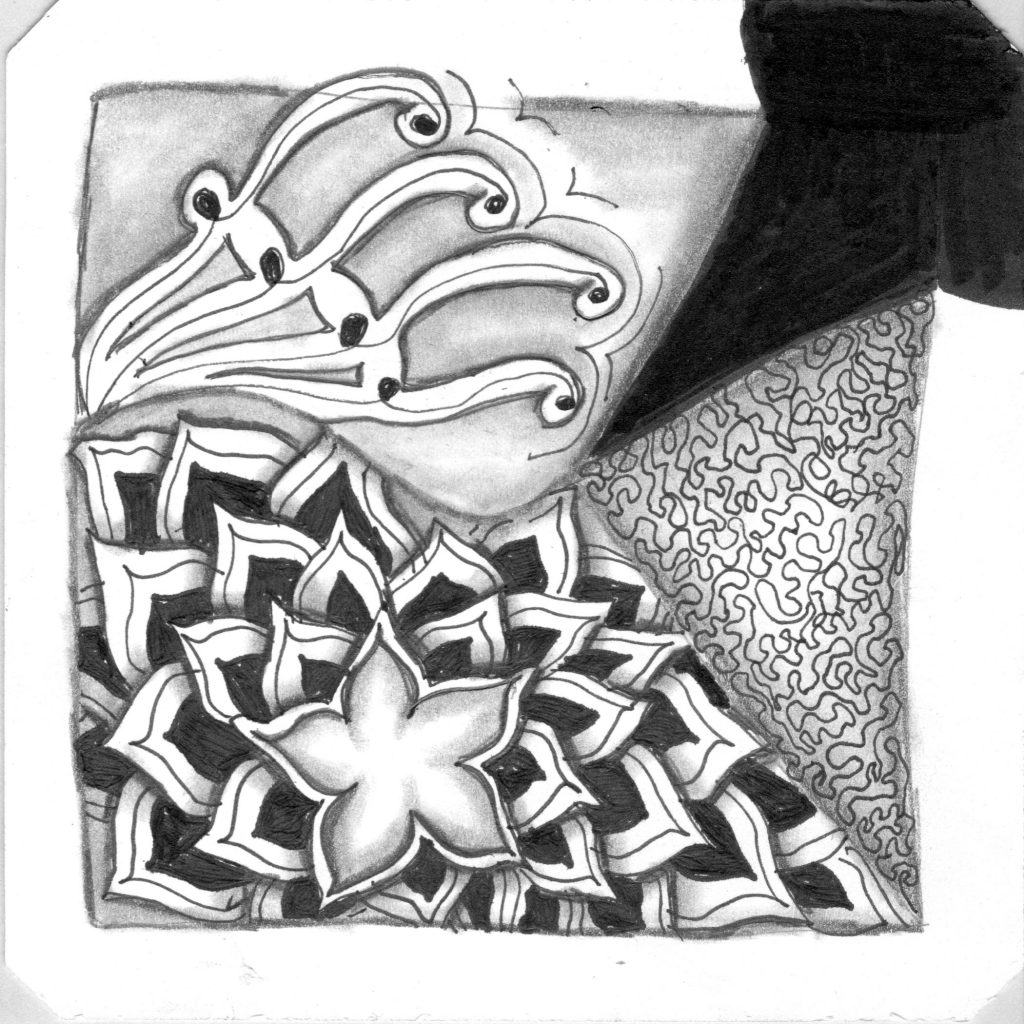 That is the scan and next is the picture I took outside. 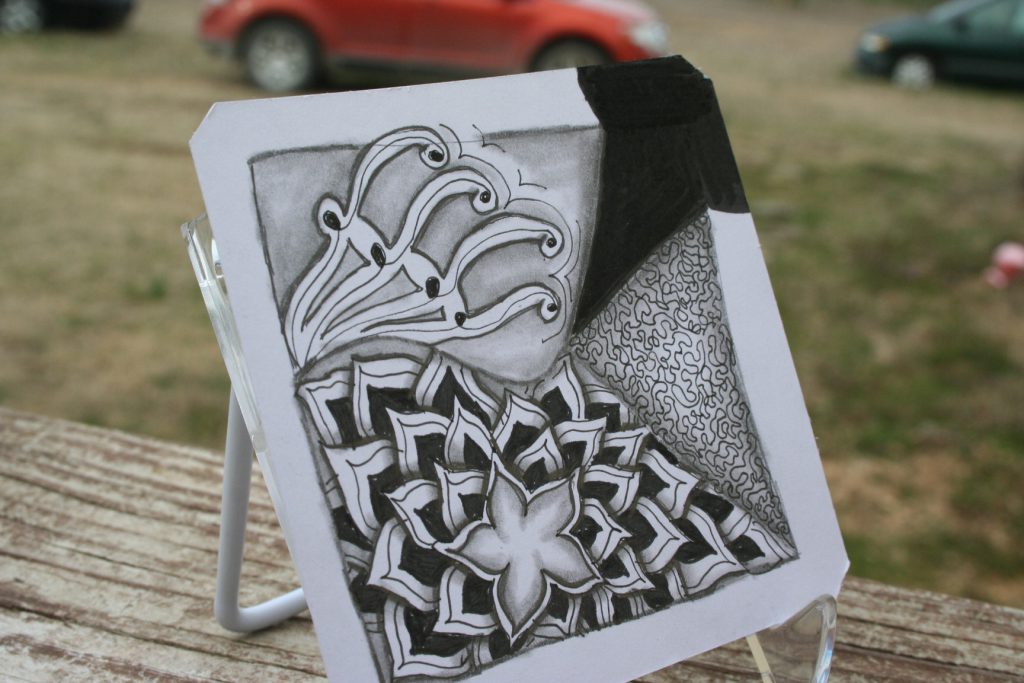 Well, I thought it looked a bit odd and maybe even regretted filling it in. So, I blackened the rest of the border. Here’s the scan of the finished tile. 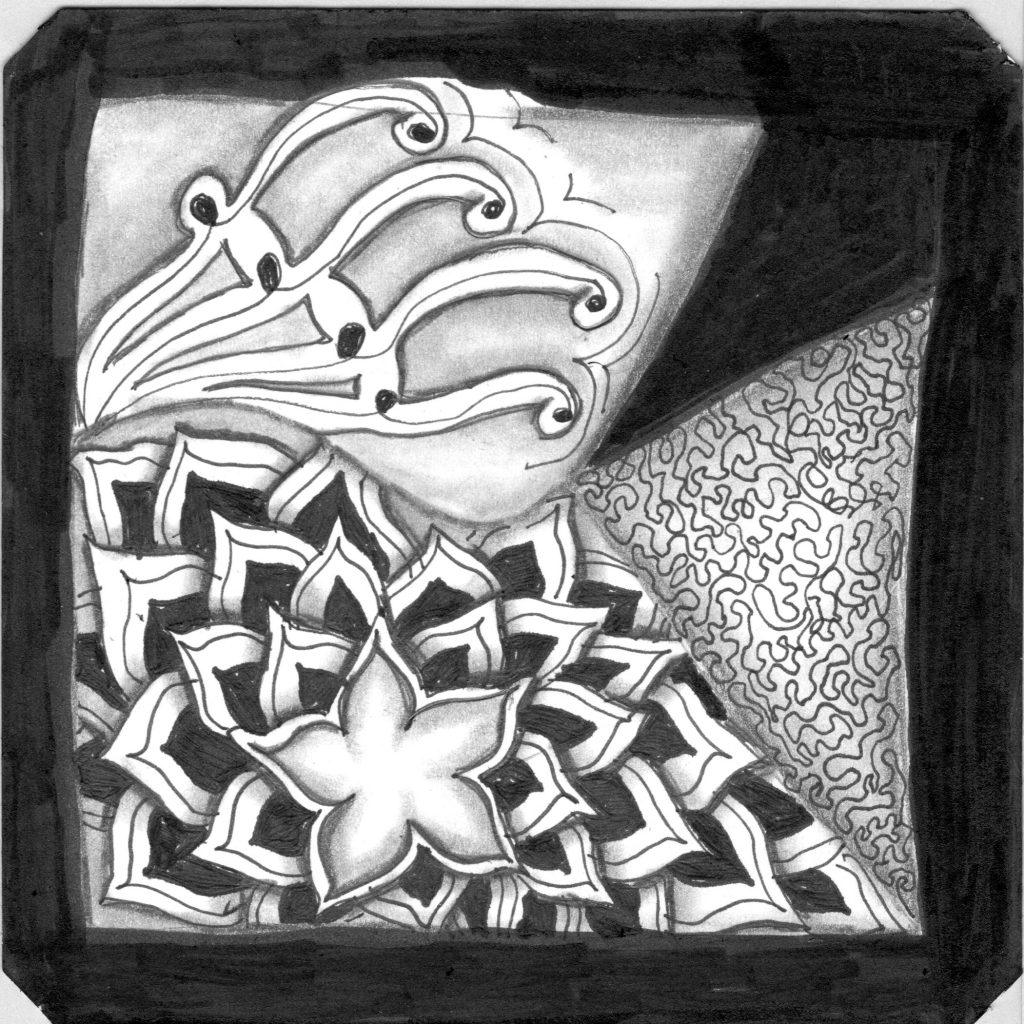 And here it is in natural but overcast light. 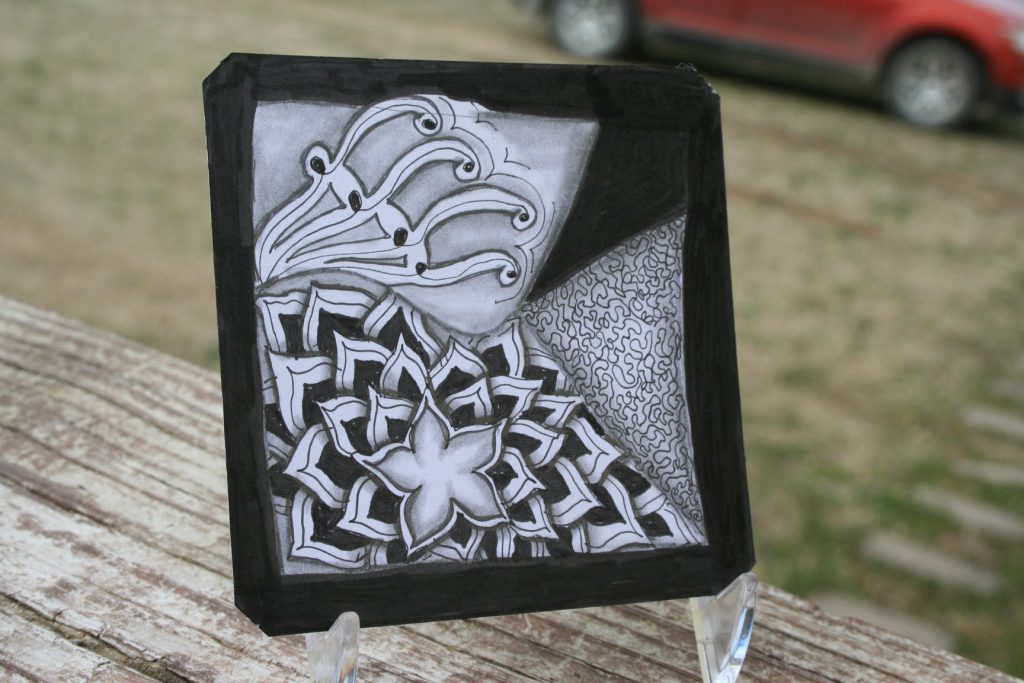 So, which way do you like it best? I think I prefer the end result with the black border even though it seems that Gust lost something after blackening the border.

Next week will be another catch-up week where Alice provided several strings to play with. I don’t know if I’ll do more than one or not yet. We’ll just have to see.

Until next time, Thanks for stopping by,