This week Tiffany and I decided to do the next Bob Ross video. It’s been a long time since I’ve done one of these and I must say, I’ve really missed it.

I bought some retarder with birthday money, to use with the acrylic paints and the Bob Ross method. This was the first time to use it as well. 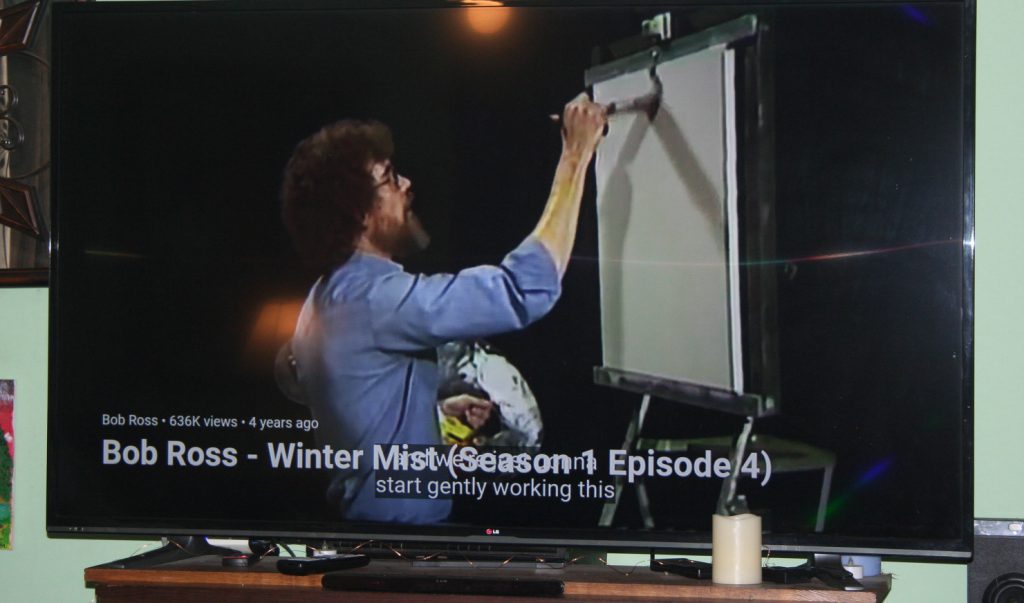 We taped down our paper, spritzed it with water, and spread retarder on it. You can see the retarder in the picture below. It is the tall wide jar to the right of the blue water spritzer. 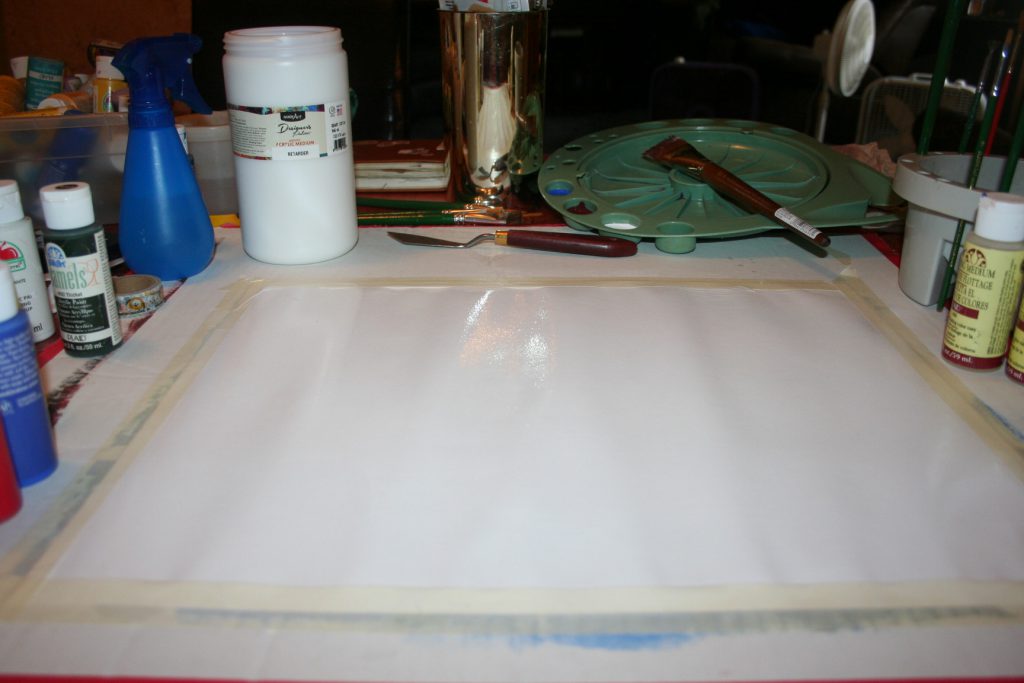 Then we realized he had his canvas turned different than ours. Thankfully we rotated our paper before we started. 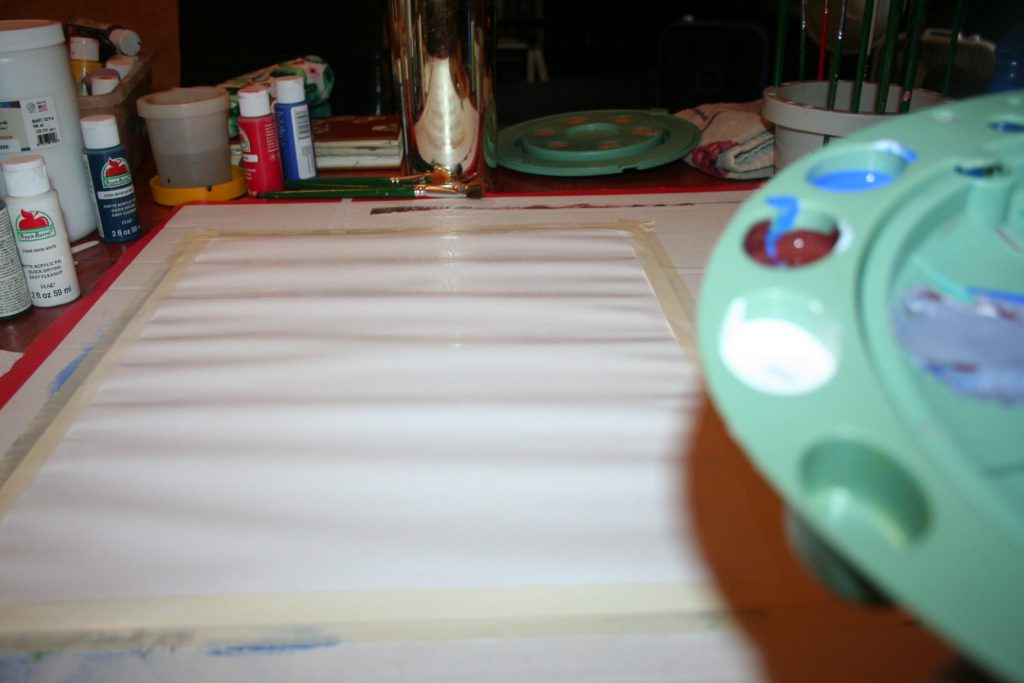 I have decided not to use the wells on my pallet again; it was a bear to use because the brushes I’m using are too big.

The first step was to do some clouds. I forgot to get a picture of that. It was a bit touchy and I don’t feel I did it justice.

Next up was to add some distant mountains. Then we followed that with more clouds and more mountains. 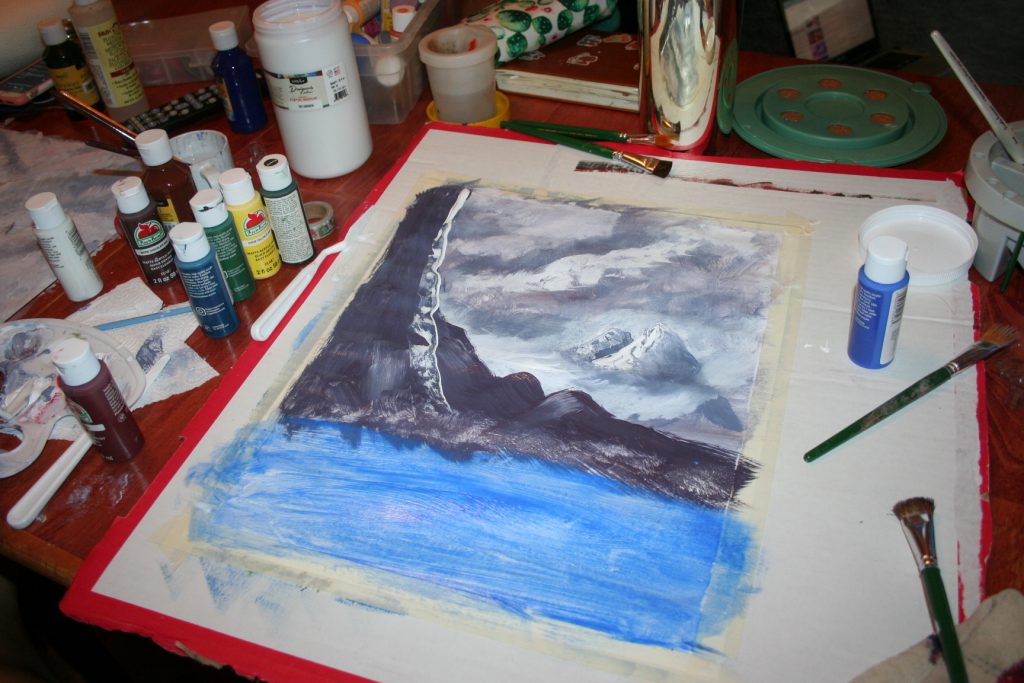 That blue was laid down, according to Bob, to provide some shadows as we go.

Here’s Tiff’s at this point. 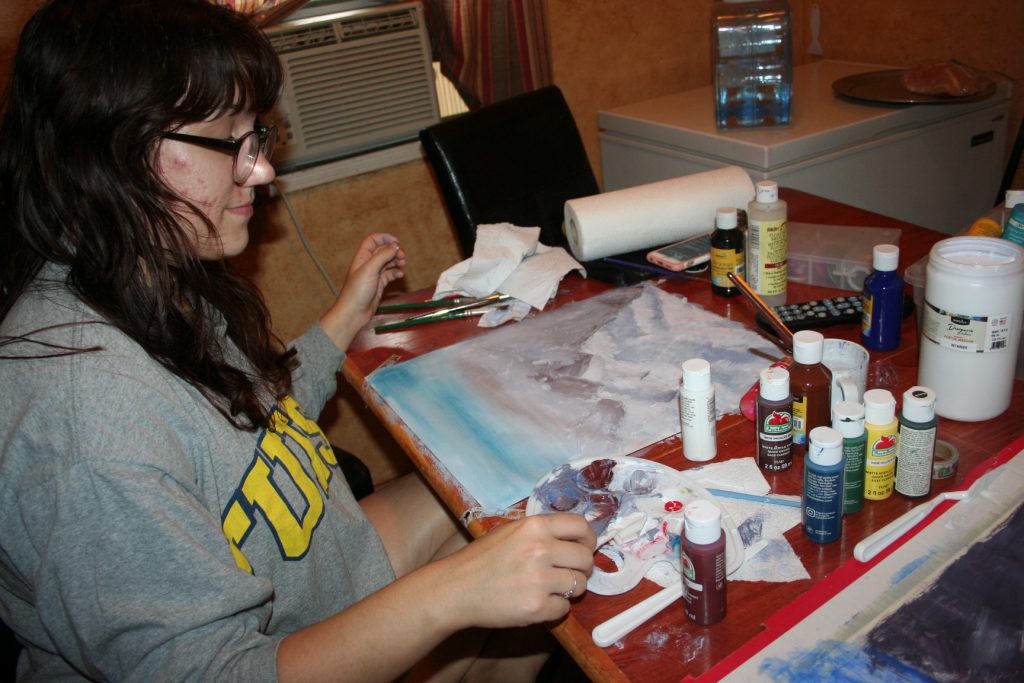 After that there were trees, now drifts, bushes, more snow, more trees,  and more bushes. 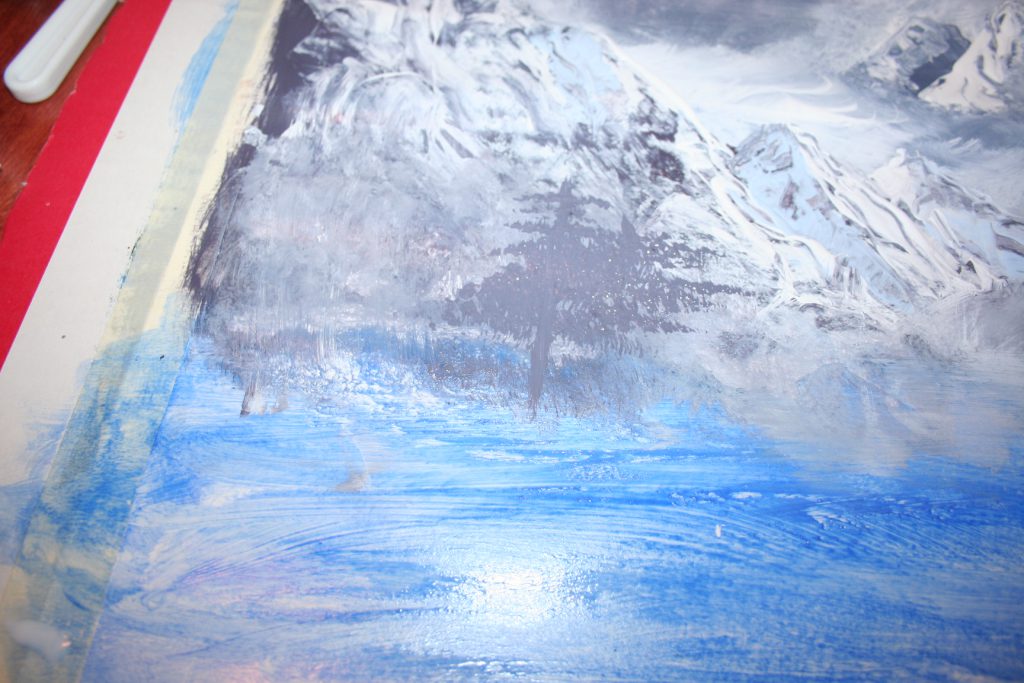 Bob has you blending paints to make your own shades. This is why Tiffany’s and mine look sooo different. (Well, it’s one of the reasons.

We had to pause around this time because I had two pre-scheduled phone calls. So when we got back to it, I spread some retarder over the parts I thought we’d be working on next and proceeded. I think it muddied it up a bit.

After the trees, bushes, and snow, Bob surprised us and added in a cabin. Now I really didn’t have room for this cabin, so this is where we differ pretty much from Bob. But we kept going all the same.

After the cabin, then he added a fence. By this time, I was using rather thick paint but knew it would eventually dry. 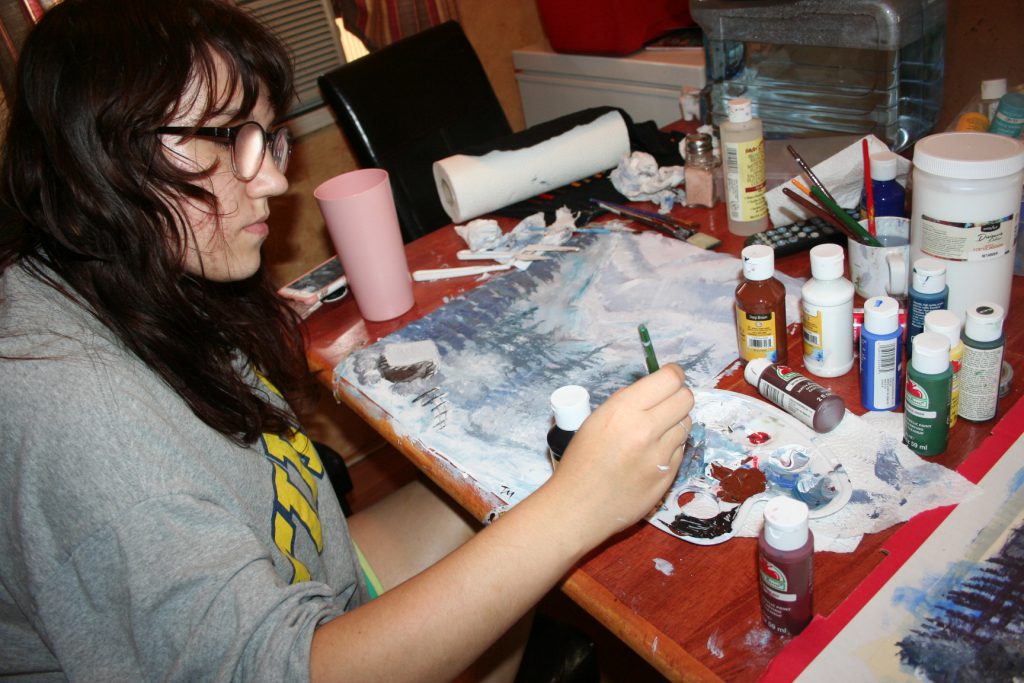 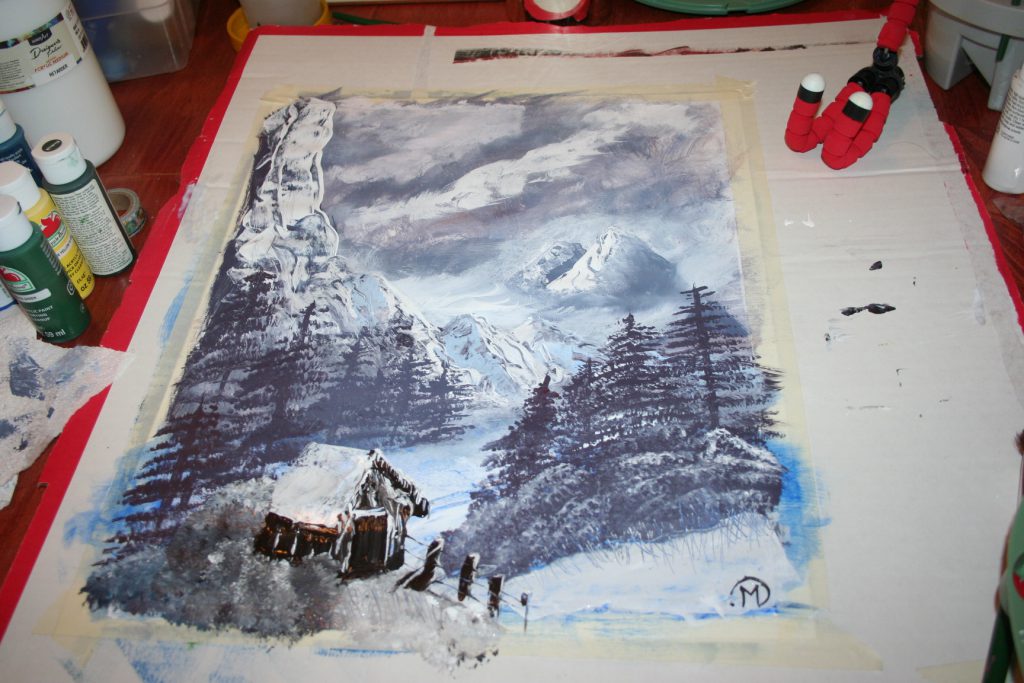 Somewhere along the line I smeared some of the paint. I thought it happened later but this picture proves it happened early. I pulled the tape and will be getting some better tape for this because it ripped part of my paper. 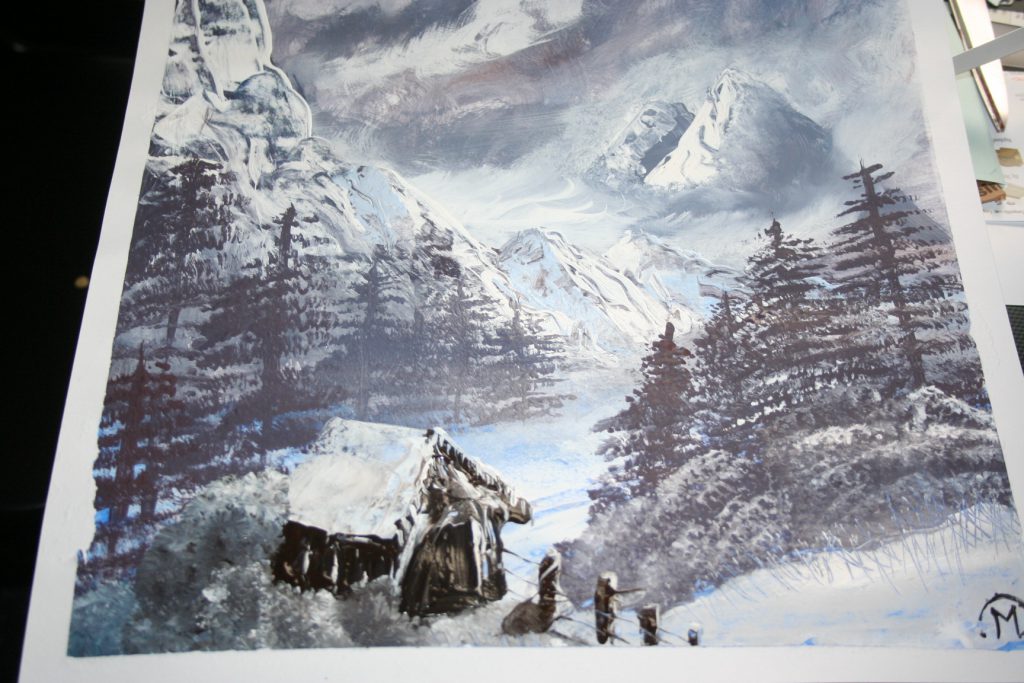 We took our paintings outside and the sun decided to peek out at just the right time. 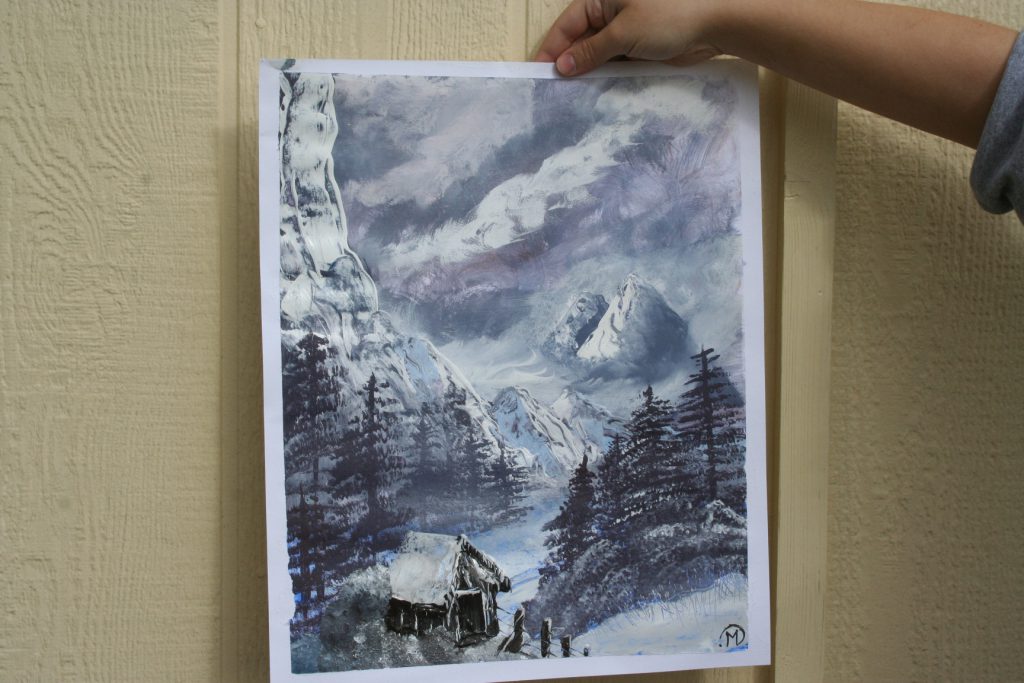 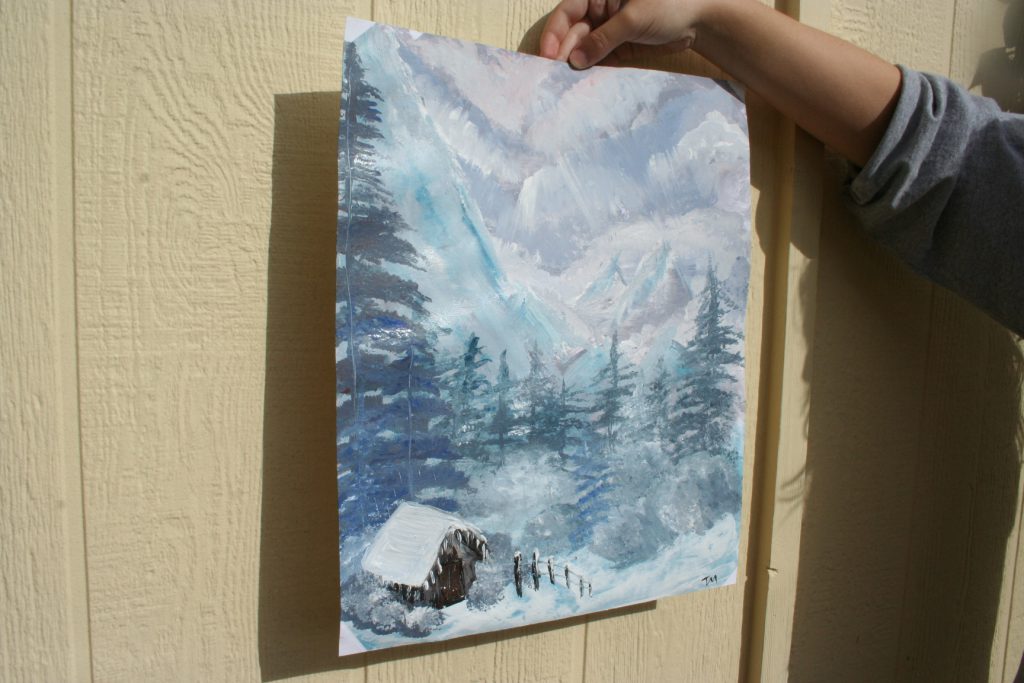 Oh, I just realized looking at Tiff’s that I didn’t put the highlight on the trunks of my trees! That would have made a huge difference. I like the icy look to Tiff’s version. Mine looks a bit stormy.

In case you are wondering, they really are that dark. We used mostly gray, created by brown, blue, and a bit of white and a lighter gray.

Well, that’s our attempt at Winter Mist. Have you tried this one? I hope you enjoyed this; we enjoyed doing it. We’ll be doing them more frequently.

I almost just took the easy way out and posted about my Bob Ross painting this week. I did the Ebony Sunset from season 1 episode 3.

I had so much trouble with it though! You’re supposed paint it black and let it dry. Then you are supposed to put some red and brown on as the wet base. I really struggled a lot with this one. I need to try it again. I may try it on a smaller paper; the large paper leaves me a bit unbalanced with the overall picture. Oh well, here it is . . . 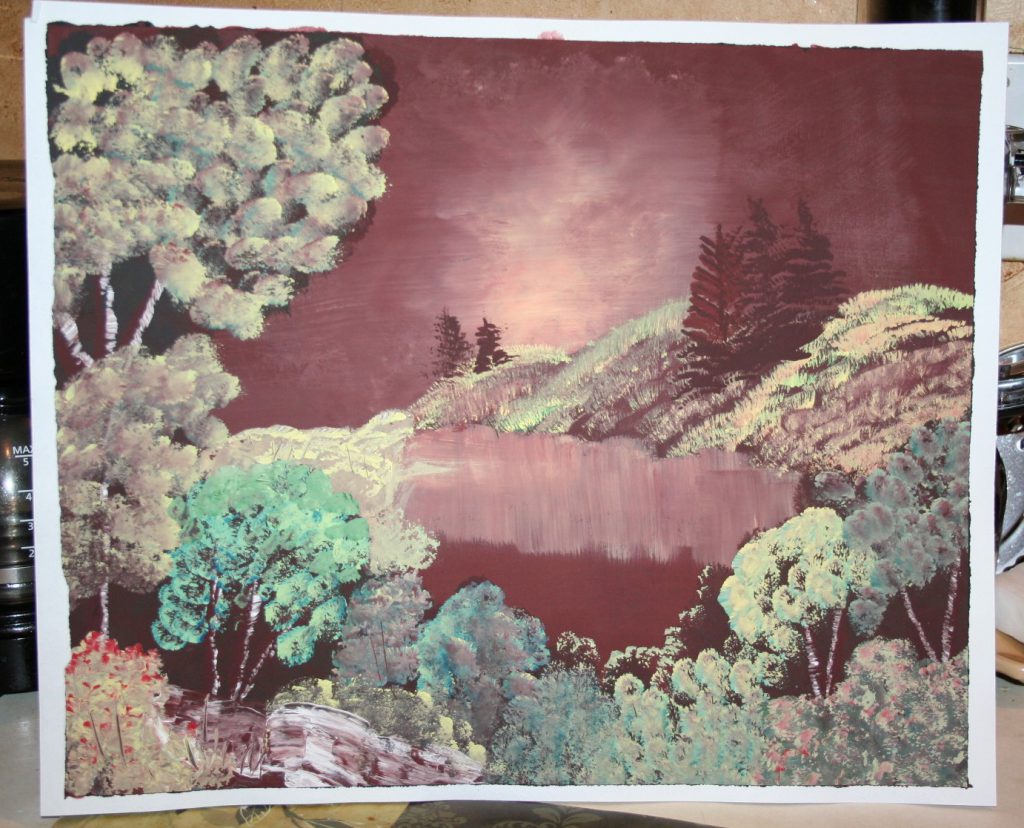 Well on to this week’s tangling. I decided to to the prompt from Today’s Tangles: Keeping it Classic. I forgot to snap a picture of the string but here it is after I did some tangling. 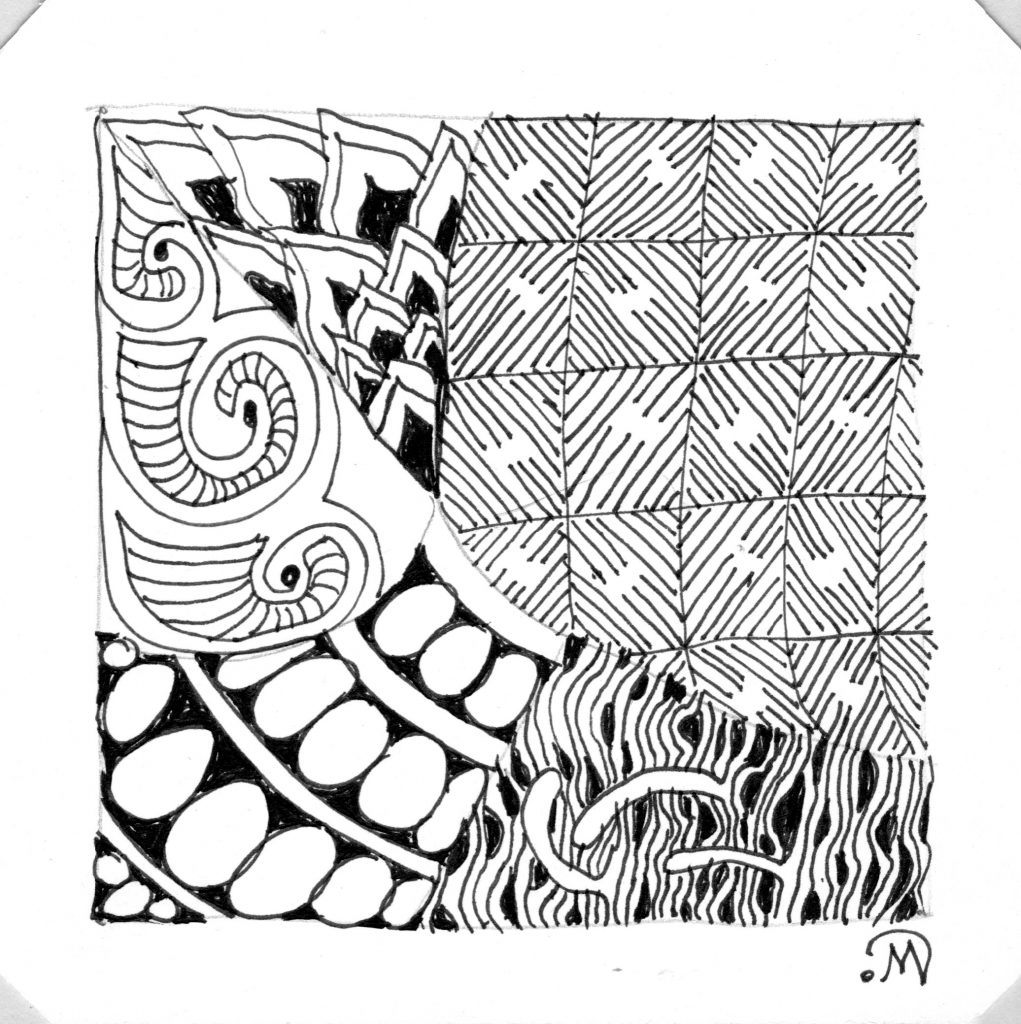 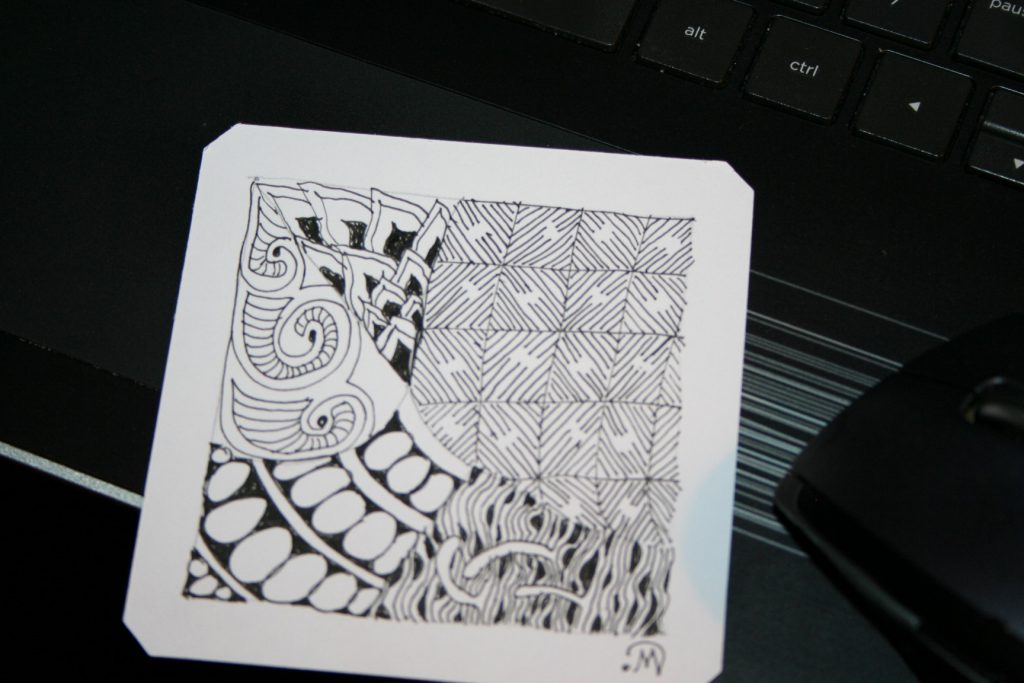 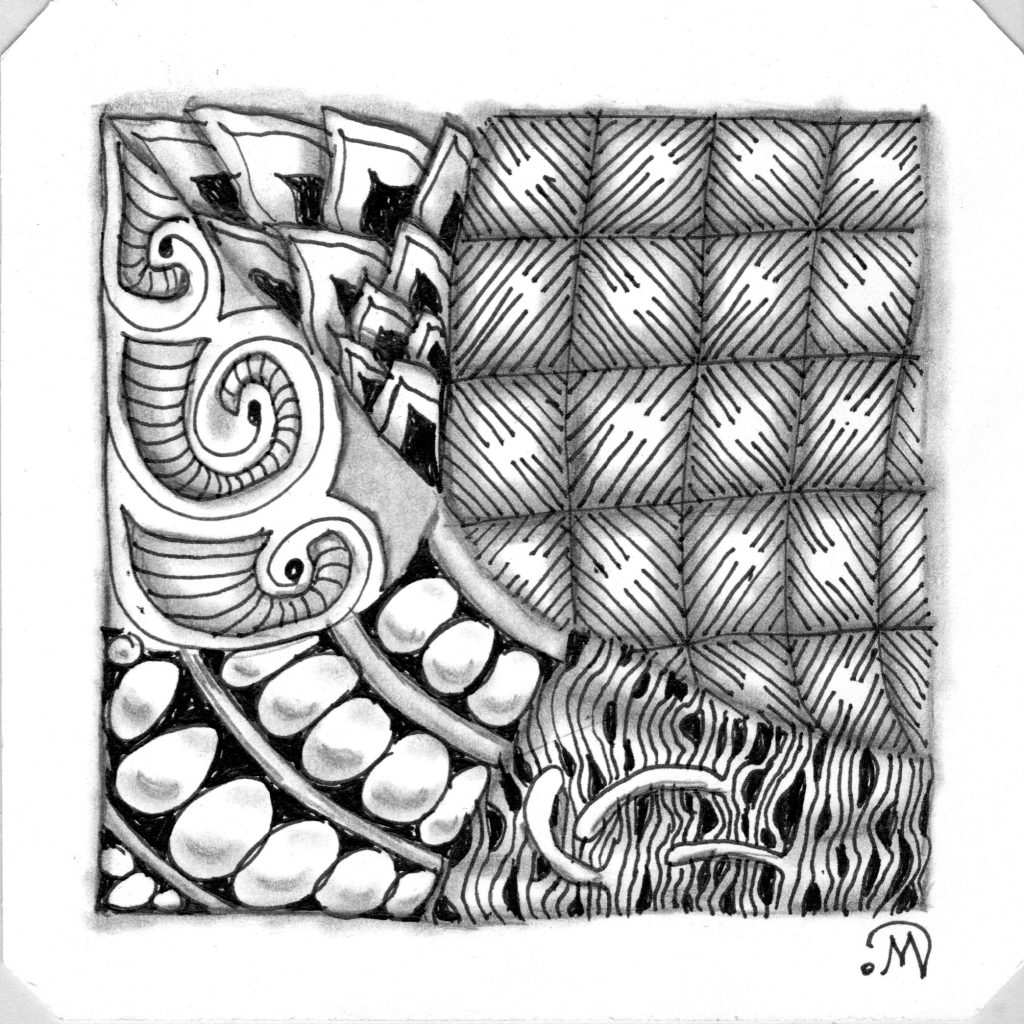 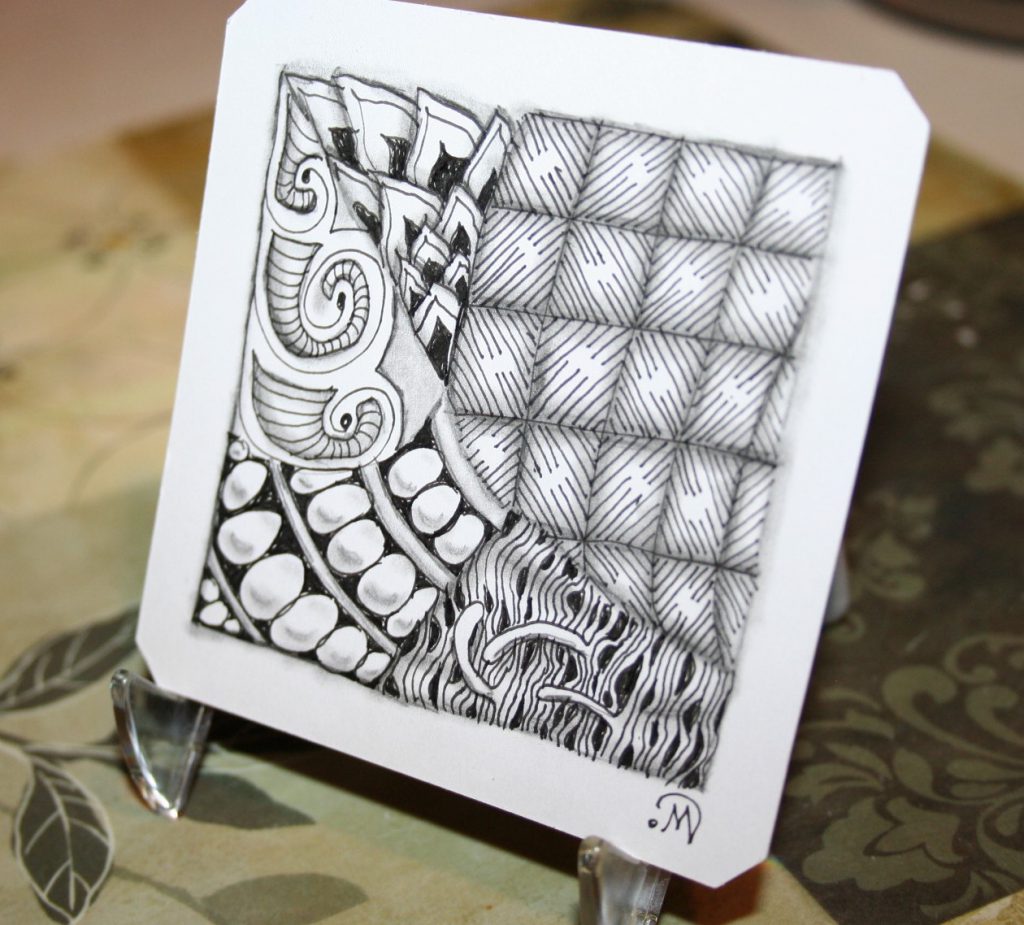 I used a some of Cyme in one section, then Yin Cut in a big section, Diva Dance, Purk, and Opus.  I followed Rick’s lead and did some sproings in the Diva Dance. 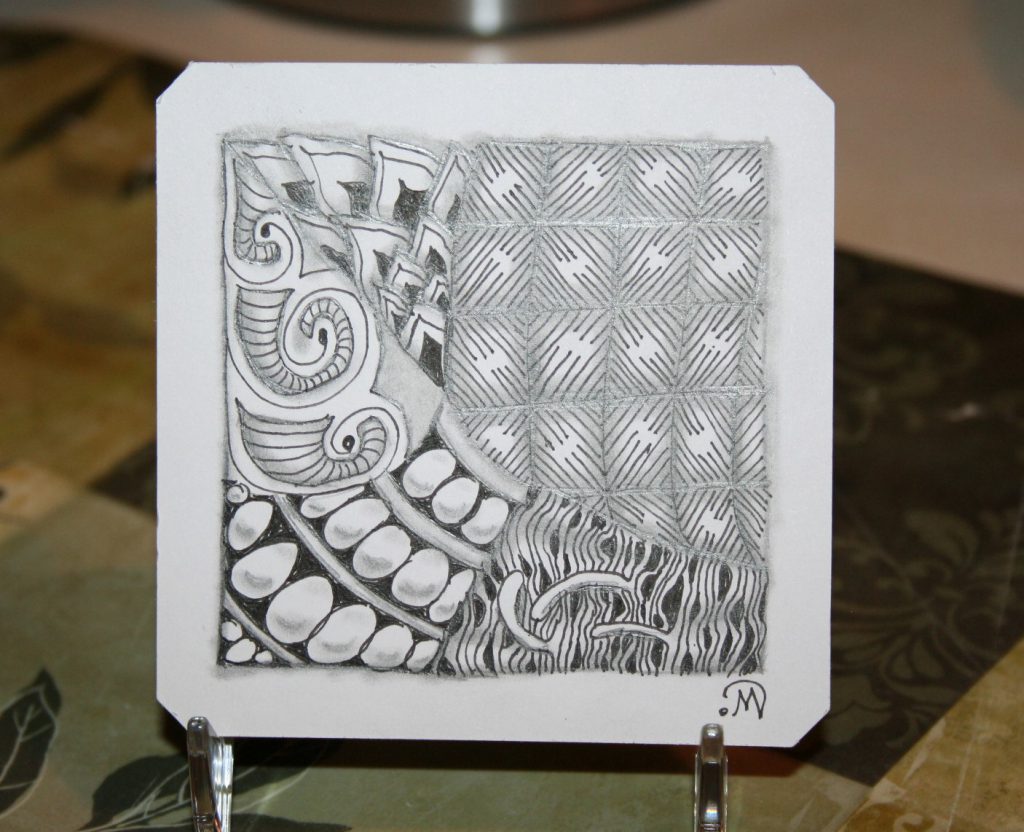 Well, that’s it for me today. I hope you enjoyed my art. Have you tried painting with Bob Ross? All his PBS shows are on youtube. Have you tried the sproings in diva dance? Rick did them on the rock and roll version but I don’t see why they couldn’t be done in any version.

Years ago I watched Bob Ross paint on PBS. He made it look so easy that I felt that I could actually do it. Unfortunately the supplies were not in my price range, especially since you needed a standing easel and those were really expensive.

Years later I saw Donna Dewberry and her One Stroke Painting technique. I was able to obtain her recommended supplies because they were much more frugal. Although I didn’t do a lot with it because she mostly showed painting on things instead of paper. I wasn’t very creative back then and didn’t think to just do the painting on paper, except for some practicing.

Recently Tiffany and I have seen several people that have done paintings following Bob Ross Tutorials. I thought I might attempt it too. I found an incredible deal on ebay for one of his sets and it looked like I was going to win the bid and at the last second I was outbid from out of nowhere. (I learned a lot about ebay and bids from that one I can assure you.) So I decided that maybe I could find another way to try it.

Apple Barrel paints are MUCH cheaper than oil paints but they are acrylic paints. Donna used Folk Art paints but I used some Apple Barrel ones when I did One Stroke Painting. So I decided to see if I could find the right colors to match Bob’s. I found this  webpage that has the hex color codes, I figured it would be the best way to try to match the colors without actually having a sample of them. 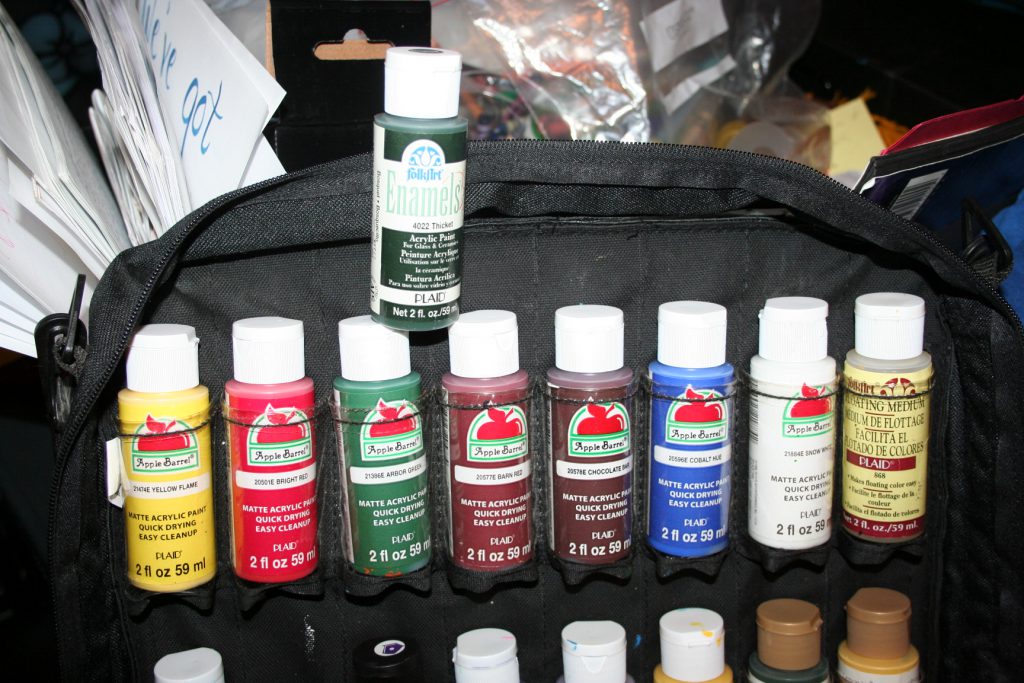 I actually forgot Phthalo green, so I used my Folk Art Thicket in its place. It’s darker than the sap green for which I picked Arbor Green so it added some contrast but phthalo green seems to have a bit more blue in it. I’ll try to pick one up this week when we go into town.

I think most of the colors are a bit off but it’s good enough for learning. The bottle on the end is the floating medium that I learned to use with One Stroke Painting. It helps thin out the paint a bit and get it to glide on the project a bit easier.

I bought some mixed media paper to practice on but it is very dry and my paint did not go on very smoothly. I’ll talk more about that in a moment. I think the paper I got was 11×17 whereas the canvases that he uses are like 18×24 or more. He uses a big 2.5″ natural bristle brush but since my “canvas” is so much smaller, I decided that I would try using just a 1″ brush. Unfortunately my brush is not a natural hair brush. I may end up getting some other brushes later. I do have quite a few One Stroke brushes, so I’m trying to use what I have–I just didn’t have a one inch brush or bigger.

I found Bob’s painting tutorials on youtube for free. I decided to start at the beginning and work my way through them. I’ll post more as I get my supplies figured out better. This time I made do with some cheap little palette knives that really were not up to the task. I’ll be picking up a real one this week, as I know he uses it a lot and I do not like how mine handled.

I found that my One Stroke scruffy brush worked better for adding in some of the foliage than the one inch brush, which had a bit too much flexibility to it. When I went to take this picture I found that I have a smaller sized scruffy brush too, which will come in handy I think. I also liked using my fan brush for adding some of the highlighted “leaves”. I used the smaller, red handled one, but realized that I have a larger one as well. 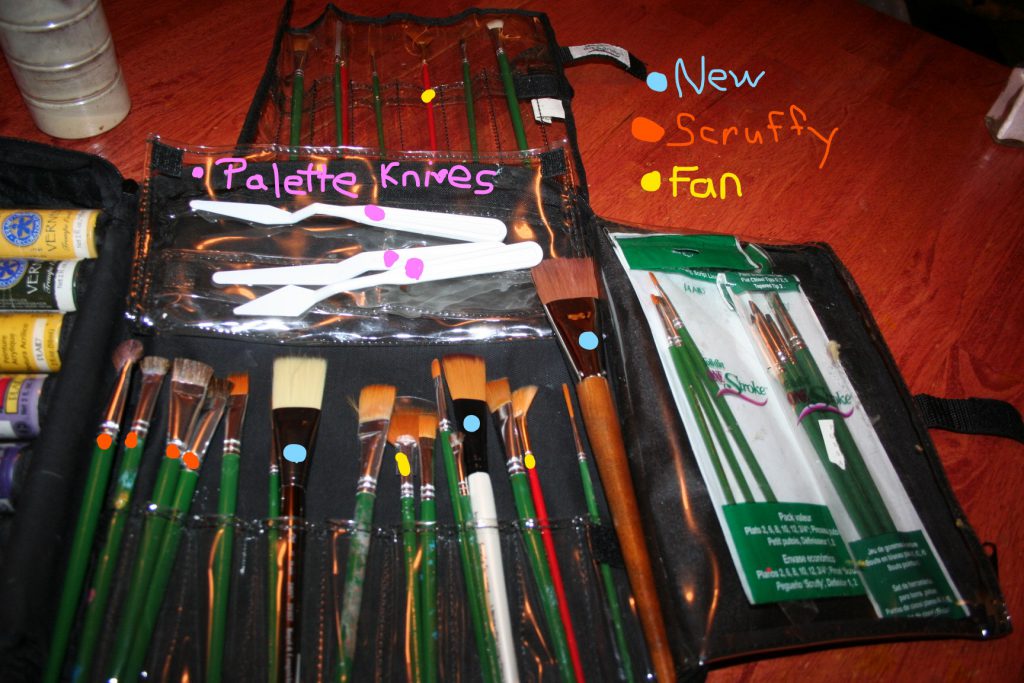 Well, I guess it is time to show you my first attempt with make-shift equipment. 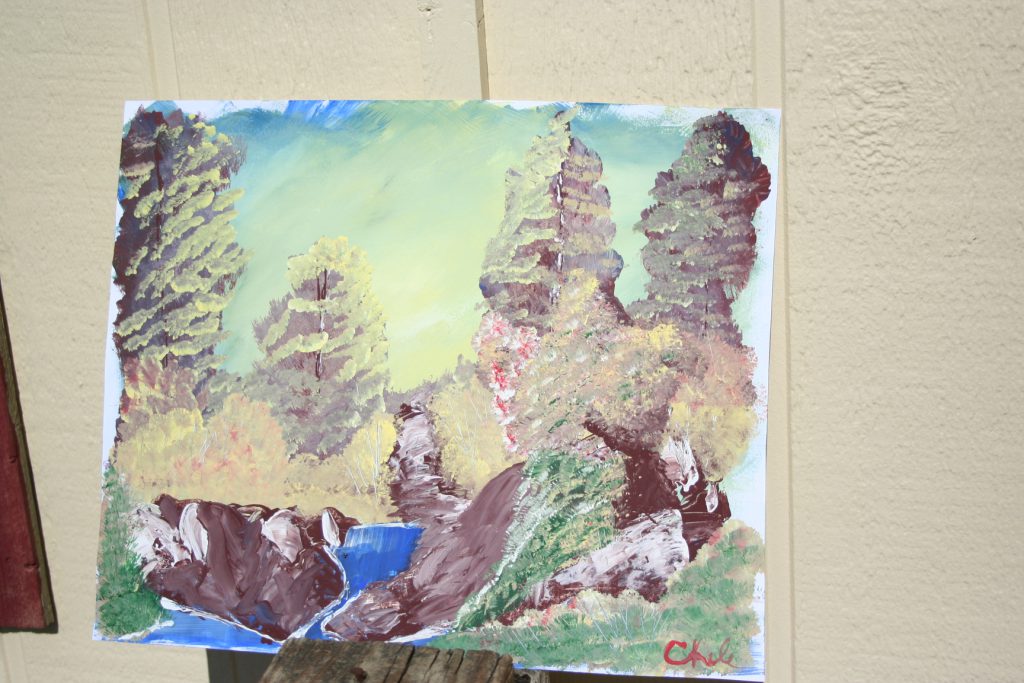 The third tree was the first done and thus the highlight messiness as I was just learning to use the brush. The rocks/dirt up front was another mess because of the improper palette knife. At the end I went back in and smoothed out some of the paint making it more like large rocks or dirt piles.

The tree in the front had its issues as well. That same palette knife was used and I ended up making a much larger tree with way too muddy for the initial leaves and thus the highlight is not seen as easily. To cover up more of the palette knife struggles, I added some greenery in the front with the fan brush.

Now, I will have to admit that I loved the “sticks” that were scraped in throughout the painting. It truly does add a lot of depth. If you look closely, you can just barely see them. 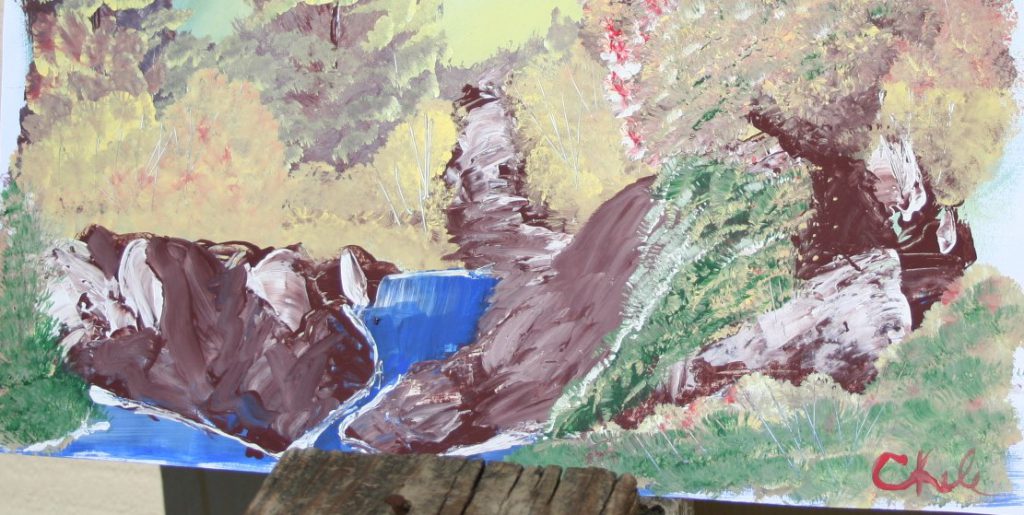 So, overall, not horrible and cringe worthy.

But definitely a learning experience.  Here it is from a slight angle, which I think makes it look a bit better. 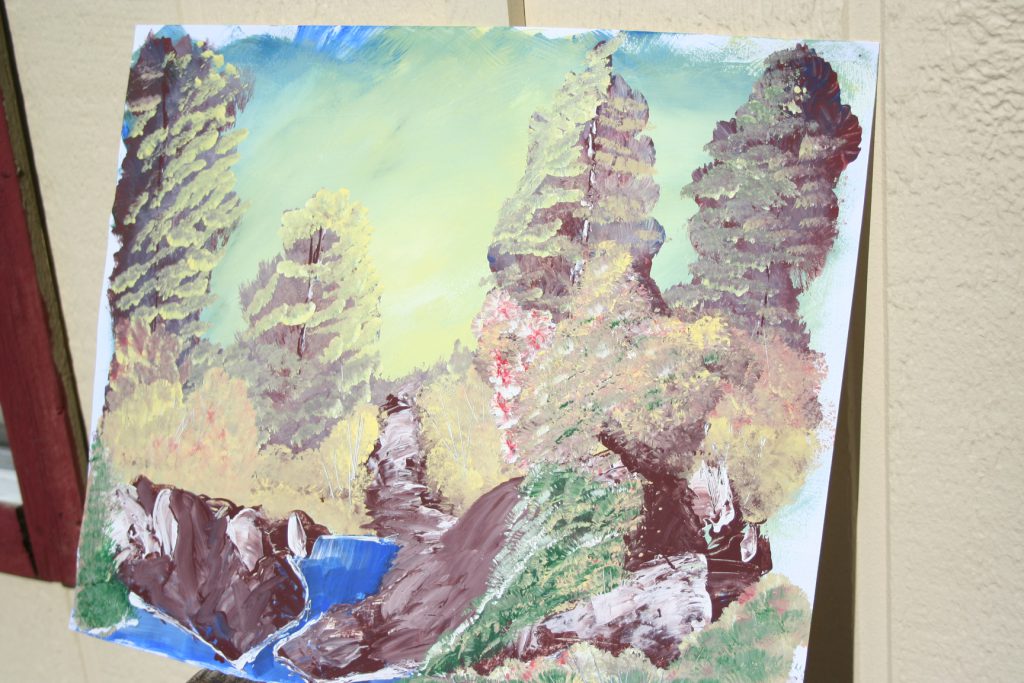 To begin the painting, I mixed a bit of the floating medium with the white and brushed it all around, like Bob did. But mine, since it was acrylic, seemed to dry a lot faster than his oils did, which is how I think it is supposed to work. But I’m wondering if I should just spritz my paper with water or put more floating medium on or what. If you have any ideas, please share them in the comments below.

I just laid this paper down flat on the table and since it is just paper, it kept moving around on me as I was coating it and getting the initial background painted in. I’ve put an adjustable (and easily transportable) easel on my Christmas wish list this year. I’ll just have to figure out how to put my paper on it–maybe with a board and clips?

One other reason I’m trying to use acrylics instead of oils is because they clean with water instead of thinner, so it’s much cheaper and smells a lot better.

Well, that’s it for me today. Until next time,