When Liam came last time, my sweet daughter-in-love, Lauren, had sent along a bouquet of flowers that Liam picked out for me. 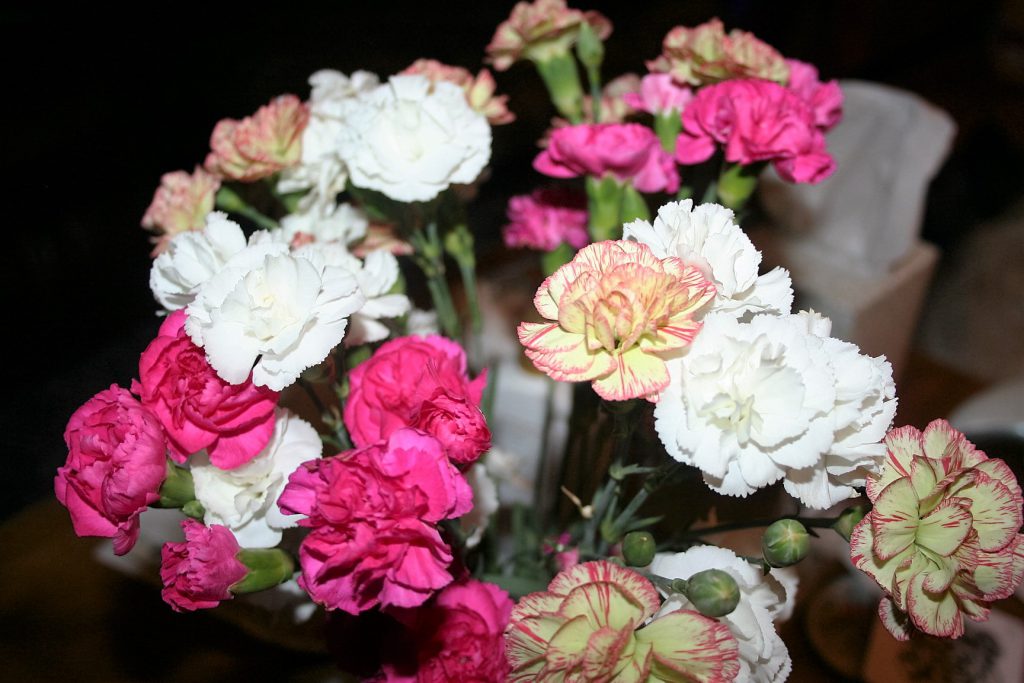 How thoughtful of her!!! And now, nearly two weeks later, they are still lovely. I feel so special and loved!

We had another freeze the other night and Tiffany has checked on the peach tree and says it is doing well. I’ll try to get some pictures of it next week.

I’m looking forward to  Walmart getting in their trees again this year. I’m going to replace my nectarine that died and my poor Arkansas Black apple tree that seems to be partially dead. Looks like it may have gotten hit by lightening.

I got the peach tree from Walmart last year.

I received this cute chef guy for Christmas from my little sister and the other day I saw that Tiffany had written on it. 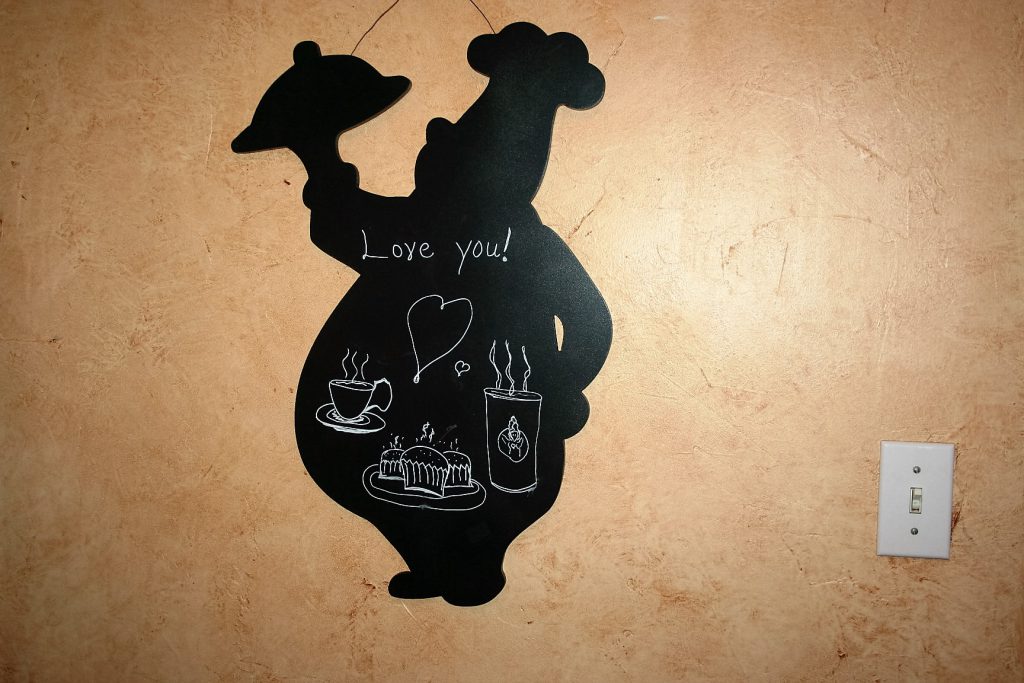 When the Bradford Pear Trees were blooming, I checked on our wild redbud trees and they hadn’t started yet. Of course I didn’t get close to them because they are not readily available, meaning I’d have to walk through the brush to check closely. But when we’ve been out and about lately, I’ve noticed that others are blooming, so I looked out my back window and rising above the barren branches were some pretty bits of pink!

I asked Tiffany if she’d take a picture while she was out feeding the animals today. 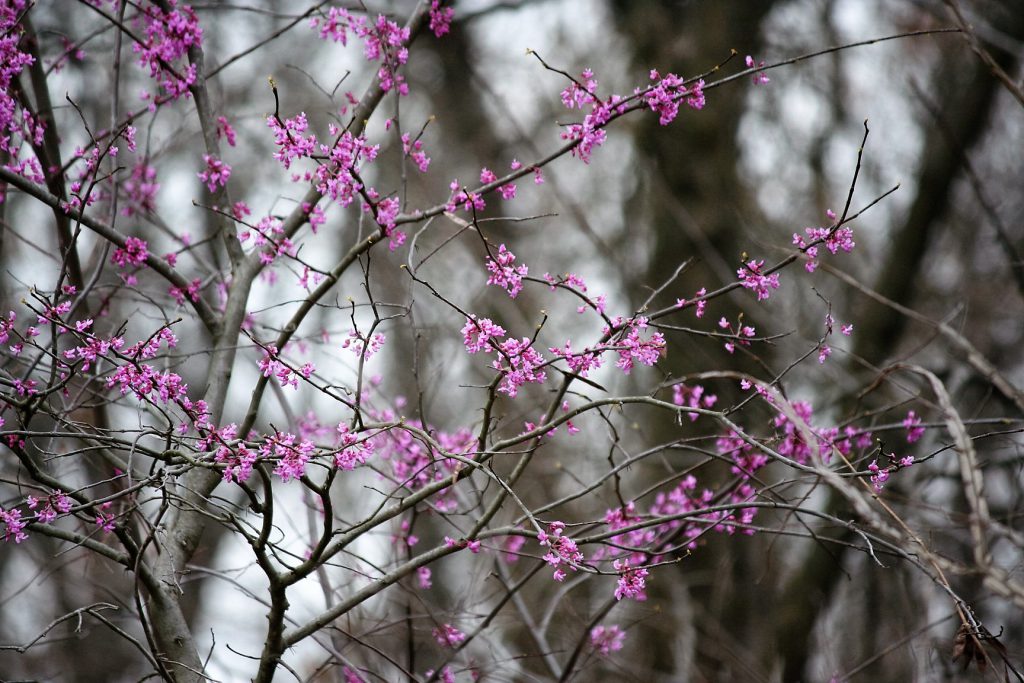 They are little but a nice bit of color in otherwise dreary or drab branches.

Here’s a picture I took with the telephoto lens so that you could see what I see. 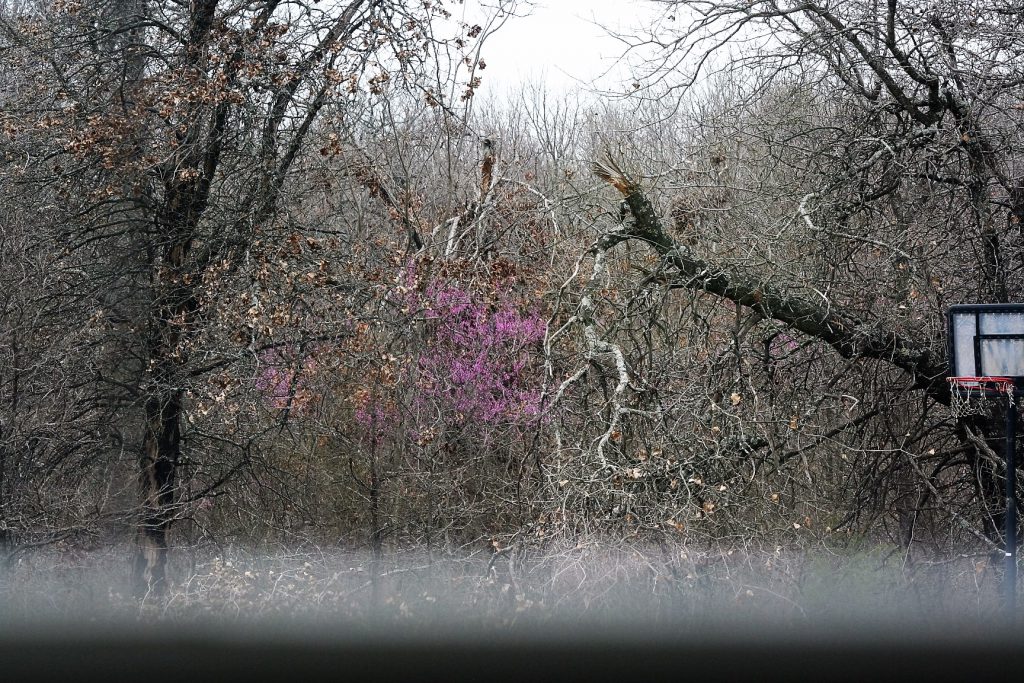 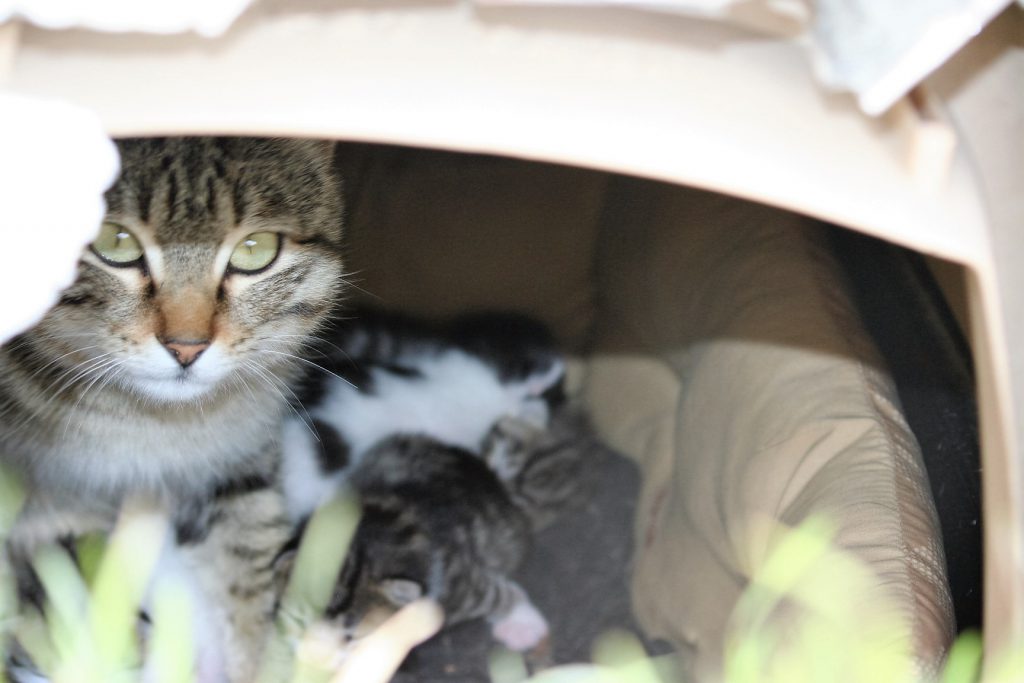 And this is a picture of KitKat from last August. 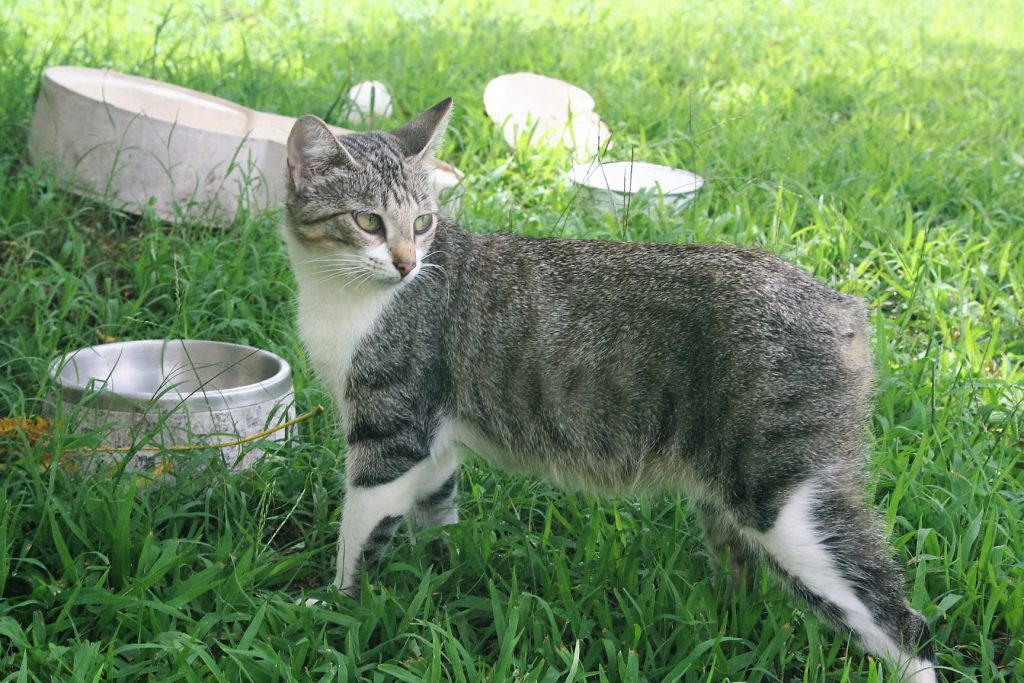 Notice that she has no tail.

These are newly born kittens. Both Latte and KitKat were pregnant at the same time. We know when Kit Kat had hers because her water broke on our front porch while Tiffany was out with her. We aren’t so sure about Latte.

There are four kittens. 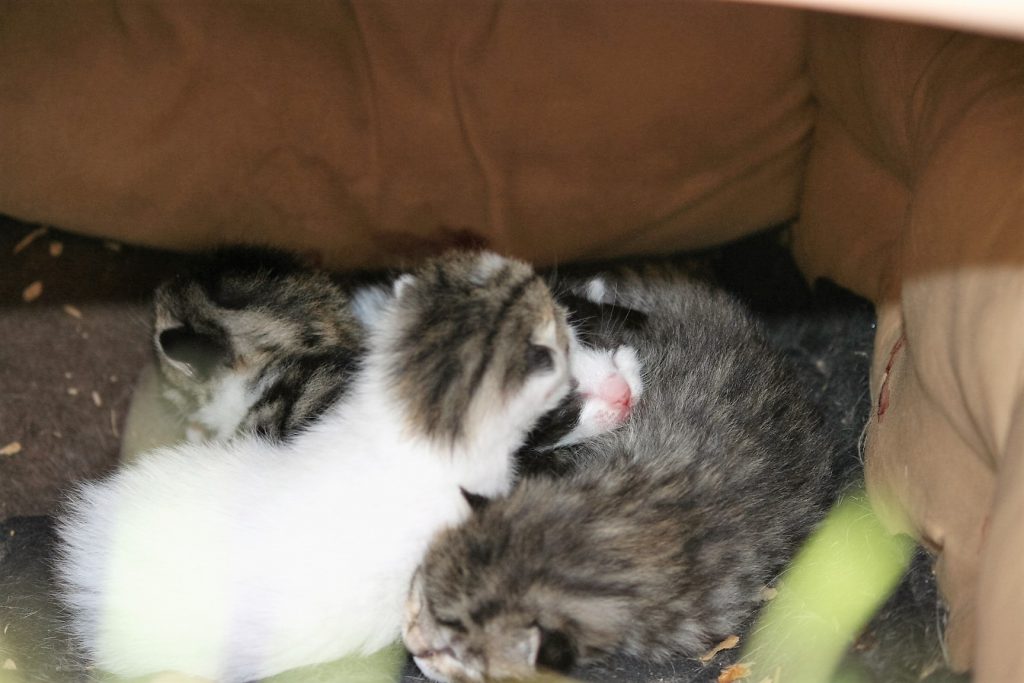 Tiffany says that she thinks three of them don’t have a tail, which would make them Kit Kat’s. We’re pretty sure at least one is Latte’s. They are both nursing all four of them.

This is Shiloh. She just had a hair cut and it is chillier out this morning, so she’s wearing her coat. 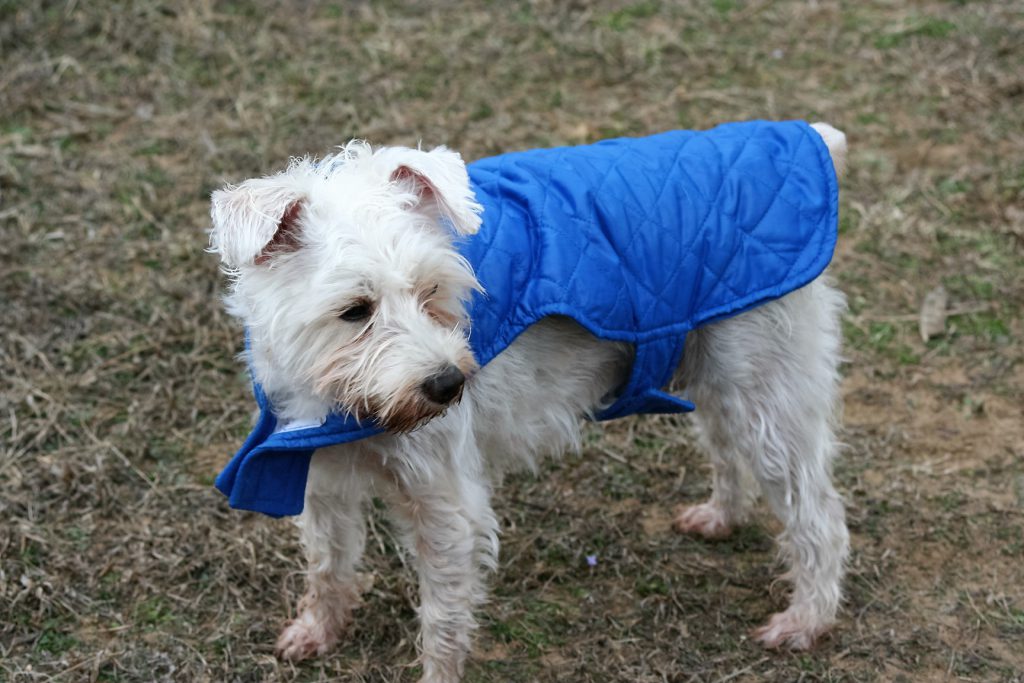 She loves kittens! She has always stuck her head in whatever house they were in and just looked at them fondly . . . no matter to whom they belonged. Kit Kat is okay with Shiloh checking in on them but Latte is another story. She hisses at Shiloh every time. Thus, Tiffany only lets her peek in when Kit Kat is with them. As you can see in the picture above, Latte is a bit protective of her kits.

Michael found a mangled dead kit at the bottom of the steps one morning, so this is probably why she is being this way. Not sure how it got that way but . . . it could be why she’s being so protective now. 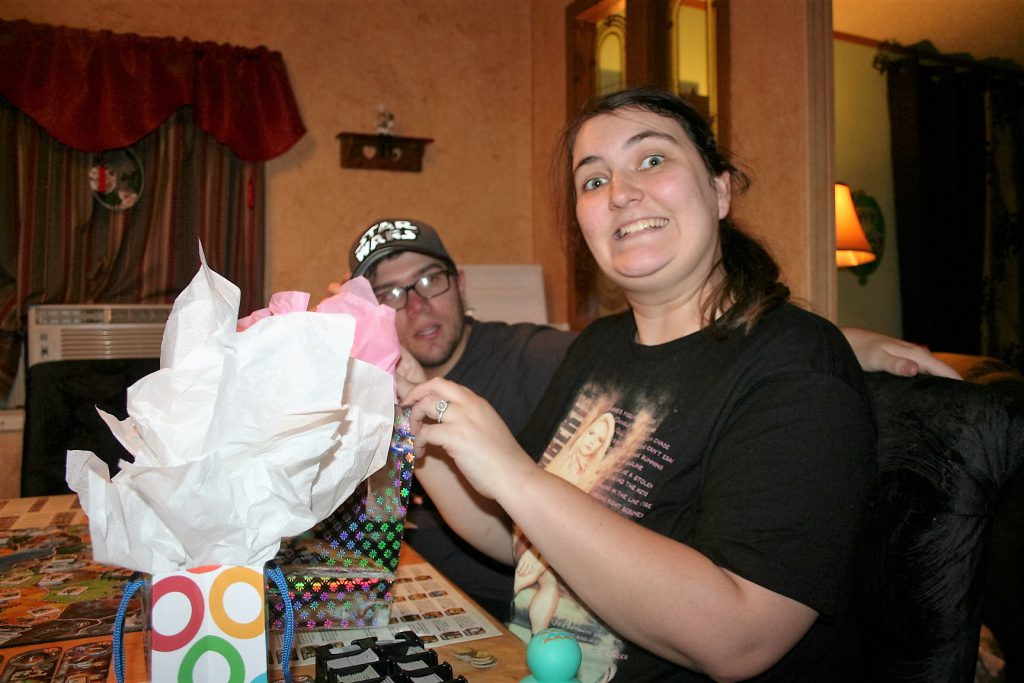 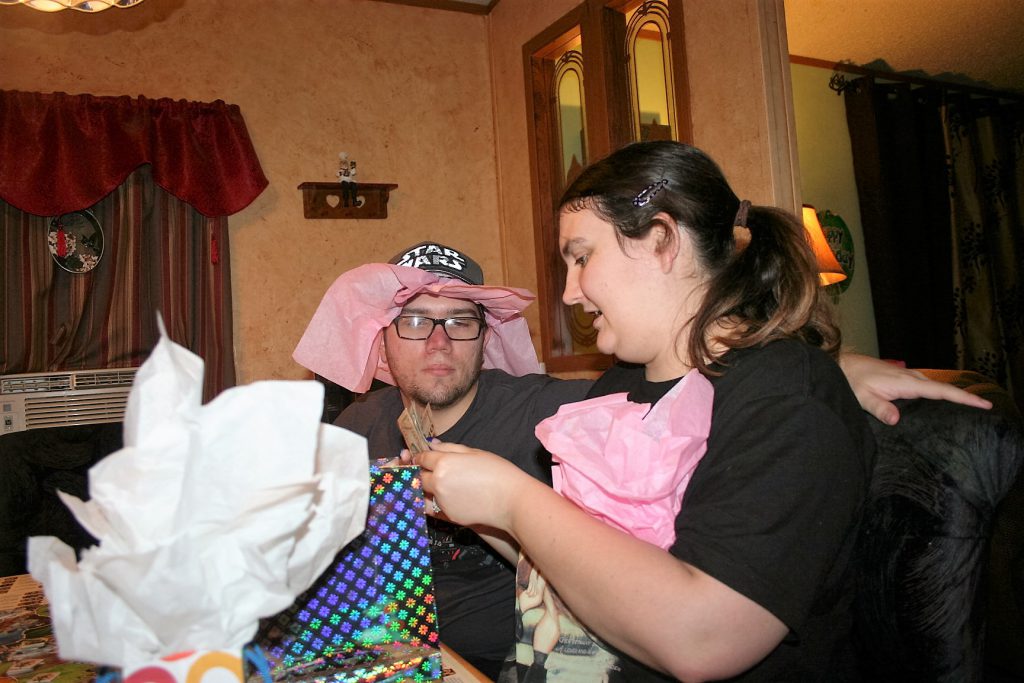 I made one of her favorite meals: San Francisco Chicken with noodles and then Strawberry No-Bake Cheesecake for dessert. I made a keto version for us. It was good, except for the crust; I gotta buy some other oat fiber! The brand I got, Anthony’s, is STRONG! It makes food taste like play-doh!

I did promise a picture of Liam. 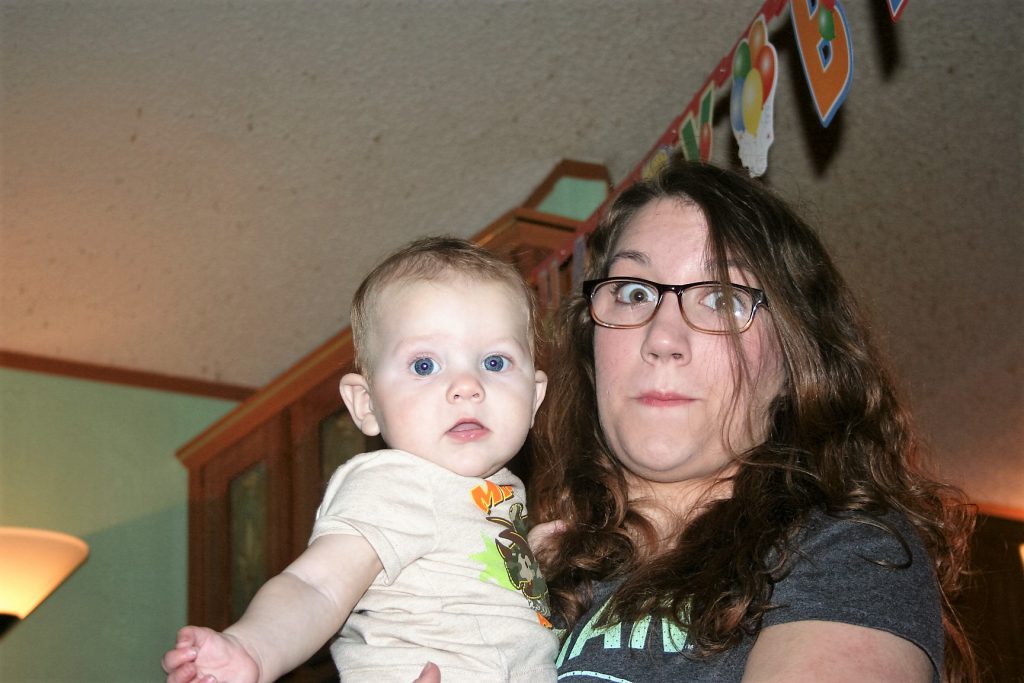 We played Small World board game together and Lauren won! 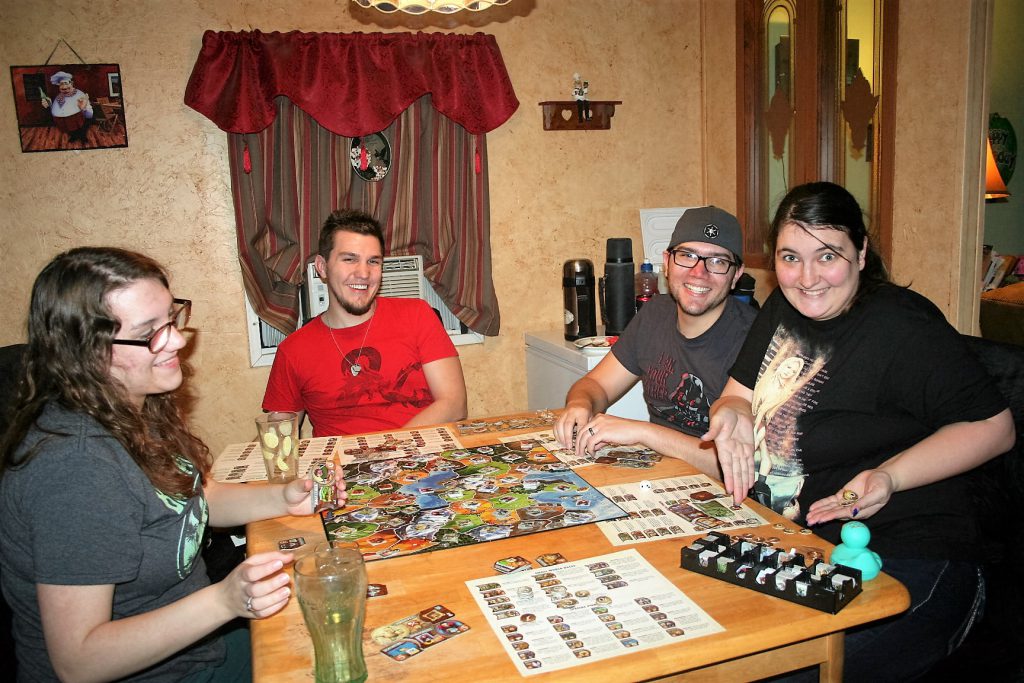 We had fun and I got lots of Liam cuddles. We get to watch him some next week too.

We have a church dinner/fun night tonight. I’m not hostessing it this time but have agreed to bring a pot of stew and help decorate this morning. I hope I remember to get some pictures to share with you next week.

I don’t know about you but when someone asks me what I’ve been up to, I really don’t know.

Seriously, my life is nice and quiet and filled with routine things. Thankfully, I took some pictures this past week

(I know it’s a shock to me as well, that I actually remembered to take some photos) to remind me what happened around me.

Last Saturday, Michael and Sean put up some field fencing along the west side of the property, mostly to keep the neighbors’ dogs out. 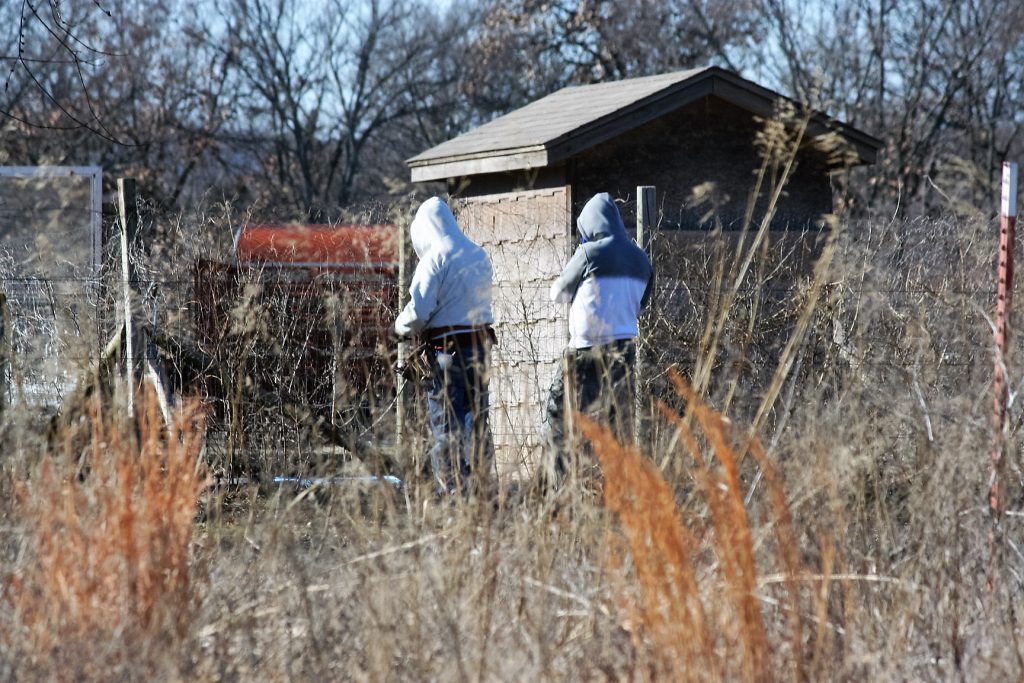 It was quite chilly out, as is evidenced by the hoods on my guys. Michael is on the left and Sean is in the two-tone hoodie. I took this photo from the warmth of the back door; no need for all of us to be cold. (hee hee)

They were out there working all afternoon. They’d gone out earlier and ended up in a conversation with our nice neighbor, who then worked on the front portion of the property line and later, across the front of his property. They got it done and came in and we had a good dinner (Enchilada Bake – unfortunately I forgot to take pictures again, so I cannot share the recipe until I make it next time).

It has helped a lot but Michael still had to run off a dog or two a day or two this week. Our neighbors have LOTS of dogs, of all sizes and breeds. They seem to be the dog house, whereas we are the cat place.

Speaking of cats, we have only had one or two cats around here for the last couple of weeks. It’s been quite odd because we had been having at least five but before the previous cold snap, we had about ten. This is not at all unusual, one of our cats will have kittens but because they are outdoor, worker cats, we usually end up with only one, or at most, two kitten from a litter of four. I don’t know if they get eaten, lost, adopted somewhere, or if there is some crazy cat lady that takes them in. Seriously.

So we were down to just Darcy, Raven, and Jitters. One day, the kitten, Jitters disappeared.  I thought sure we’d see it the next day but a day went by and then another and another. Then Raven disappeared too. All we had left was Darcy.

The weather has even been nice, so I can no longer blame it on that. It’s been so nice, that I’ve resorted to opening the windows during the afternoons. One afternoon this week I heard the dogs next door barking up a storm! There was much more barking than their usual ruckus; it seemed that all hands were on deck for barking.

Shortly thereafter I heard, what sounded like, lapping. You know, the sound a big dog makes as it drinks water? Well, that should not be because it sounded like it was right under my window.

Finally I got up and looked out, thinking I was going to have to shoo away one of the big dogs and instead I saw this. 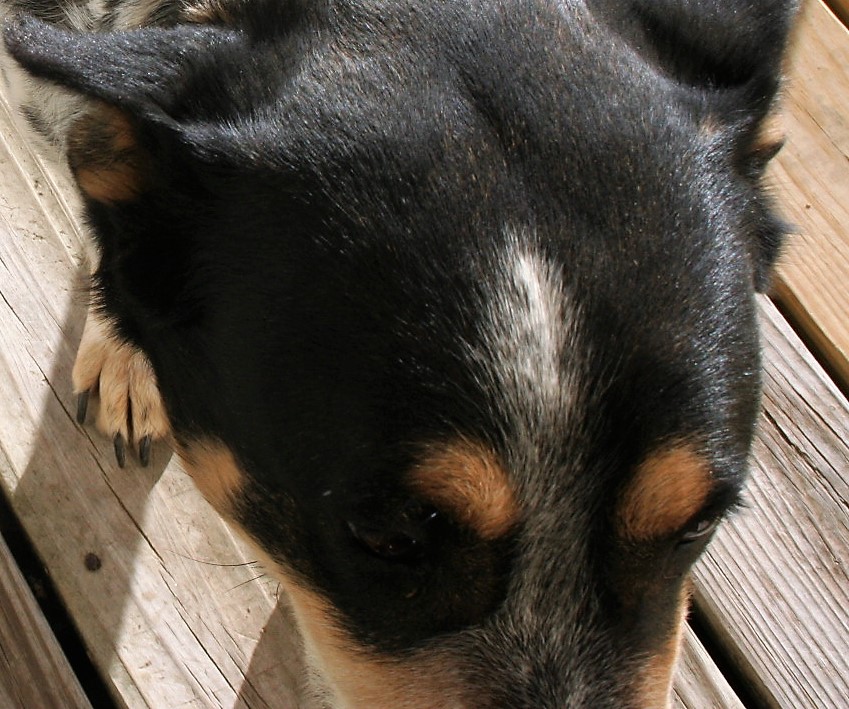 I expected to see one of the larger dogs of our neighbor but instead I see our Sasha . . . loose . . . on my porch. I called Tiffany because I she feeds her every weekday and I have very little interaction with her AND she’s big and strong . . . well, medium-sized, but strong. Evidently, she had gotten off her chain and went running around the area. All that barking I’d heard must’ve been in reaction to her presence. I guess she’d had enough and was ready to be taken back to her house. 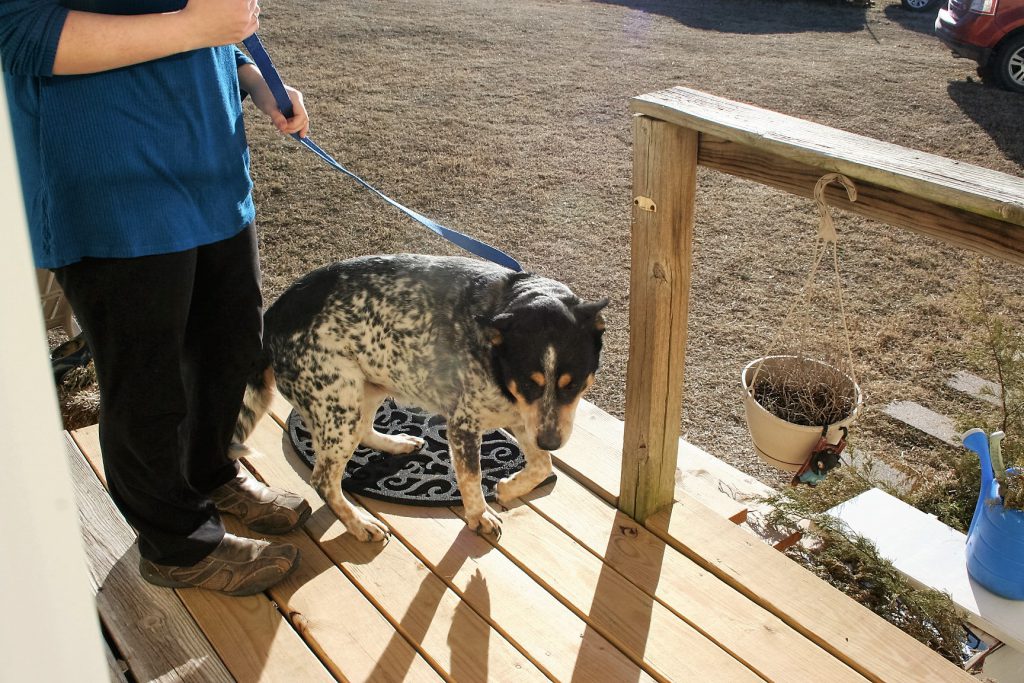 It looked like she had second thoughts and if she doesn’t want to go, it’s difficult to make her. But in the end, she was ready after a little coaxing from Tiffany. 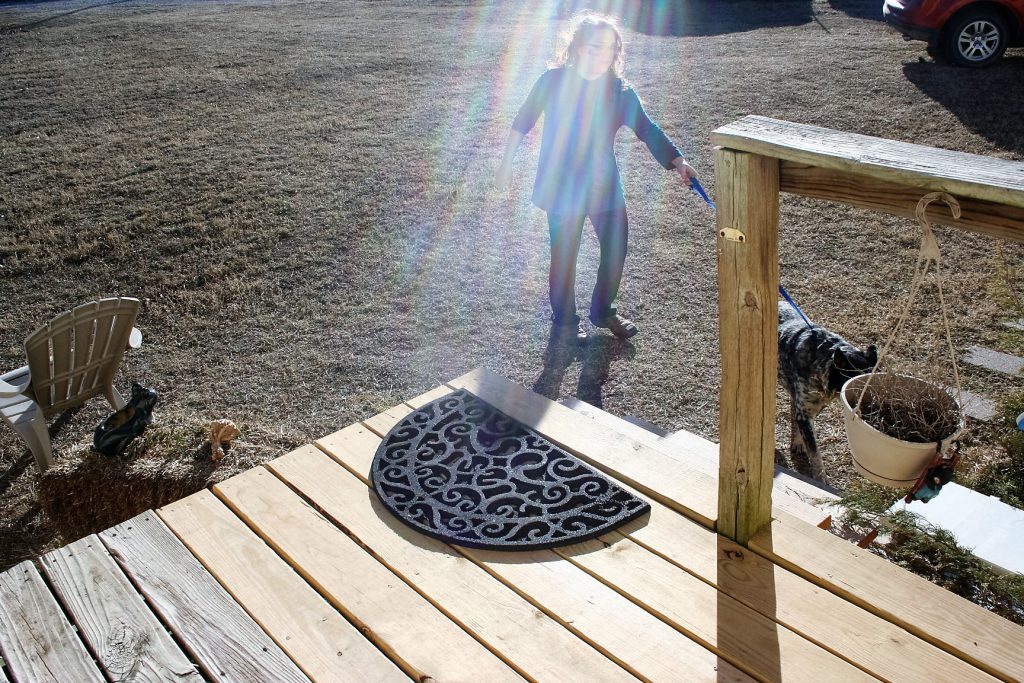 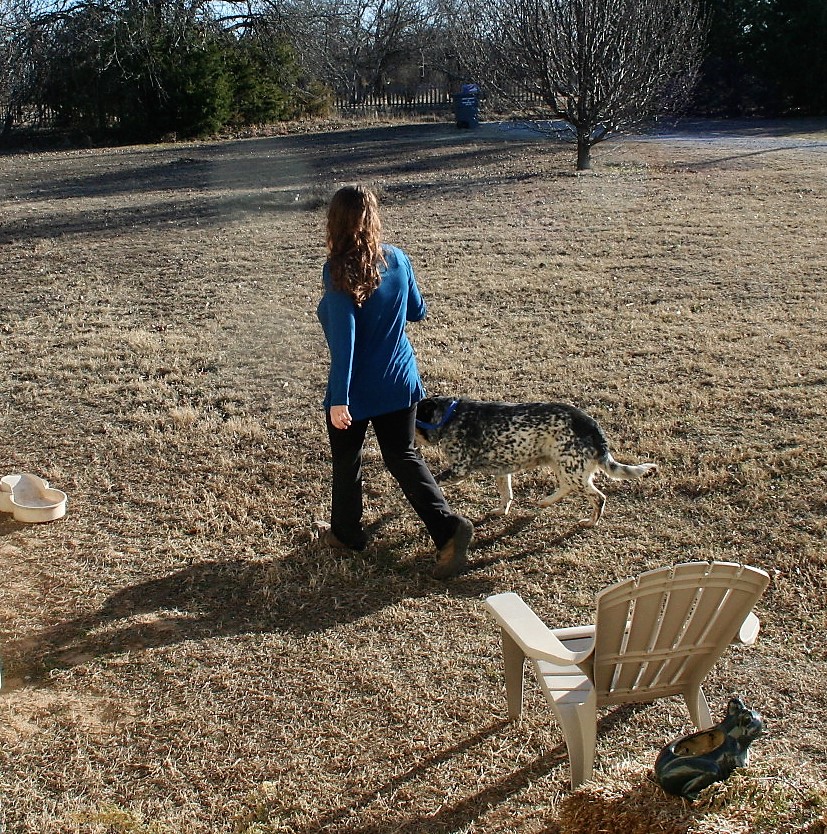 Tiffany got her back where she belongs and she was happy to lay in the sun and nap for a while.

Then the next day, several of the cats returned. 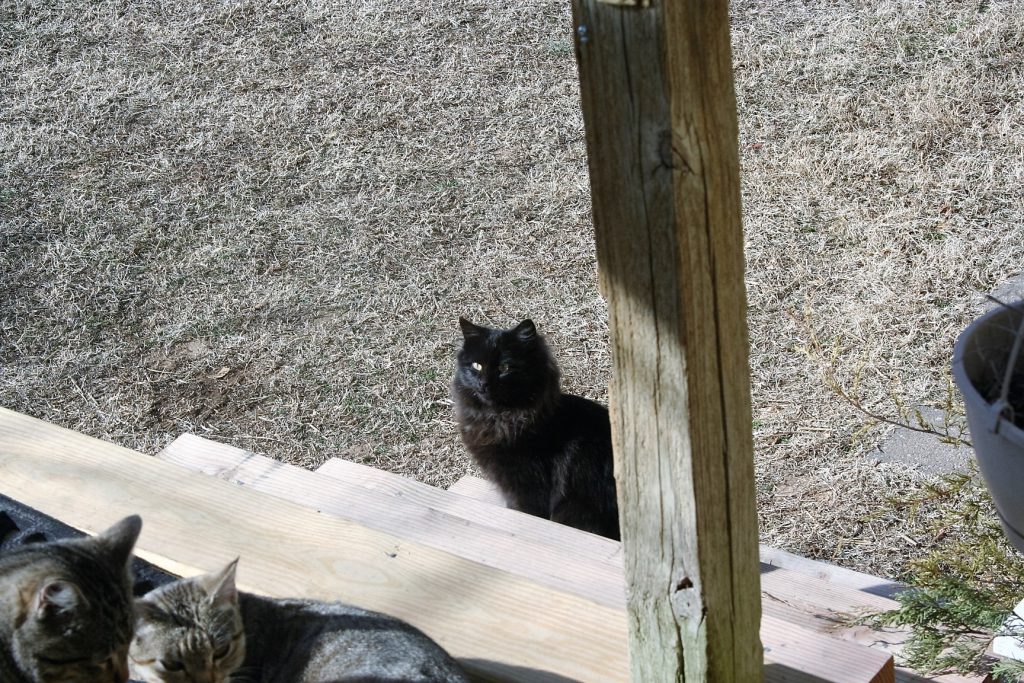 Raven is on the steps. Her coat has never been so groomed. AND she was cuddly!

This is the cat that has run from us since birth. Tiffany and Sean had just gotten her to begin to come to them before she disappeared. Now she’s back and wanting to be petted. Yes, I think there is a crazy cat lady that manages to keep them for a while and then mistakenly lets them out of the house and home they come. We saw Jitters and Kit-Kat the next day too. So, we’re back up to five.

I haven’t seen Liam in two weeks and am really missing him. I know, I’m spoiled compared to some people.

But I will see him Sunday because we will get together at my parents’ home to celebrate Lauren’s birthday and watch the Super Bowl.

Michael says he doesn’t even want to watch it, since it’s the Patriots and the Falcons. Then yesterday he saw that there is going to be some Trump-bashing and that made him more resolute in his feelings. But Mom makes pizza for everyone, a tradition we started before the Christmas pizza tradition, and I don’t want to miss that!

Momma makes really good homemade pizza. So, we’ll go and visit, watch some football and the commercials (I hope they’re better than last year!) and come home when Michael tires of it all.

I hope you have a good weekend. Until next time, God bless,