I saw this really neat resource yesterday. It is a pdf entitled Sunday is Served; Sunday Lunch Simplified with Once a Quarter Cooking available from Eat Better Spend Less website. It is free to download if you subscribe to her site. I was very interested in this ebook, so I subscribed as required.

It is an interesting idea. It seems that Beth, the author, likes to utilize her freezer to streamline the cooking process. In this ebook she has a rotation of four meals for each of 3 months and changes each season. Remember this ebook is for Sunday lunch only. I really like her idea and am giving some thought to how I can adapt her ideas to some of my own recipes. I prefer to have hearty meals on Sunday afternoon and just have a snack later in the evening. Most of the recipes in this ebook are for lighter meals which would leave my family wanting a bigger meal later in the day.

I actually prefer slow cooking recipes like a slow roasted chicken and crock pot mashed potatoes. I just need to give this some thought and see how I can create a similar system using my own recipes OR what I can plan for the evening that would make the lighter lunches work. It really is a neat idea. I recommend getting the ebook for yourself.

Last Friday was the church party I mentioned. I had a lot of fun and I hope everyone else did too. I wish we would have had more time to prepare, mostly so that the people would have known what to expect and thus more 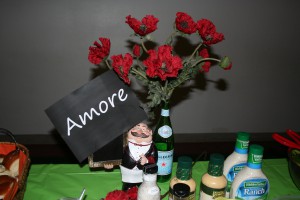 people would have come but we had a good turnout, even though the 20’s and 30’s generation wasn’t there. Then we probably would have had a bigger turnout if it hadn’t been Valentine’s Day weekend.

It did seem that the people enjoyed the mix of games, soloists, fellowship, door prizes, and old videos. We had spaghetti, rolls, salad, and  German chocolate cake for 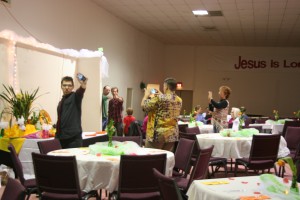 dessert. I was able to procure four door prizes and some small game prizes.

All these pictures were taken as we prepared and none were taken once we got started.

But it appears that at least a few people saw something that was picture worthy. 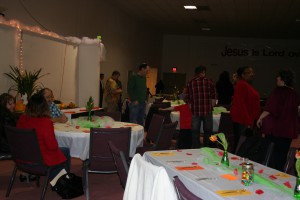 We did a fun little scavenger hunt for the kids with the end prize being a goodie bag. I took a picture of the sweet lady that made the goodie bags and on the bag made 7 clues and cut the picture into the 7 pieces. Each clue led to another clue and after obtaining all the clues the children were to turn the pieces over and put together the puzzle. Then they were to go to her to get their prize. 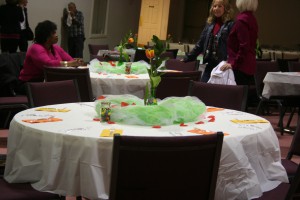 It gave the kids some time to burn off some energy and the adults time to fellowship for about 10-15 minutes as they finished up their game (counting how many ‘chef dudes’ I’d placed around the room and lobby).

Oh! One word of caution, if you ever put edible game pieces on the dinner table, be 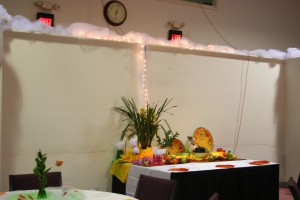 sure to tell them not to eat them until the appointed time.

I had jars with peanut butter M&M’s in them on each table for a guessing game. The winner at each table won the jar of candy. Since I didn’t make this clear, some tables ate some/most of the candy before the game. It made for some fun banter between me and the attendees.

Overall, it was a good night and I think most everyone had fun. Now to begin planning for our next fellowship party in a few months.

I guess I’m done rambling for today. I hope you have a great weekend.