It’s been a good but rather normal week, meaning not much to write about today. And then I think back to last weekend and remember, hey! Michael and I went out on Saturday! Yay! I do have something different to share.

Well, I did share about this some on Monday, so it’s not really news, now is it. Oh well.

I won’t repeat myself from Monday, so if you are interested in where we went to eat, pop on over to Monday’s post.

We also did a little shopping looking for items for Michael to put on his Christmas wish list. He saw this mug that he loved the look of, but would it pass the grip test? 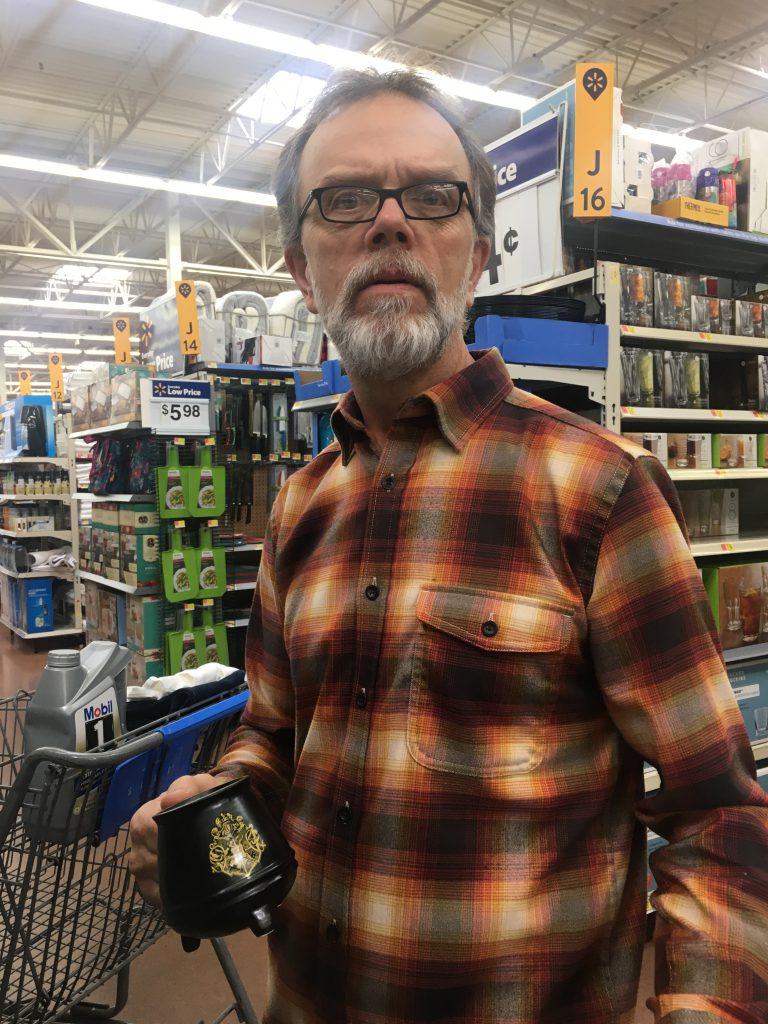 Ultimately it did not pass the grip test and we did not find any red mugs that met his approval either.

(He had a very serious tester face on there.)

We did find some things that made him smile. (He loves to laugh.) On one of his new video games that he plays online with some people that he has played with for over a decade, he has a ghillie suit and loves it. Well, he found this hat while we were shopping and just couldn’t keep from putting it on and making us both laugh. 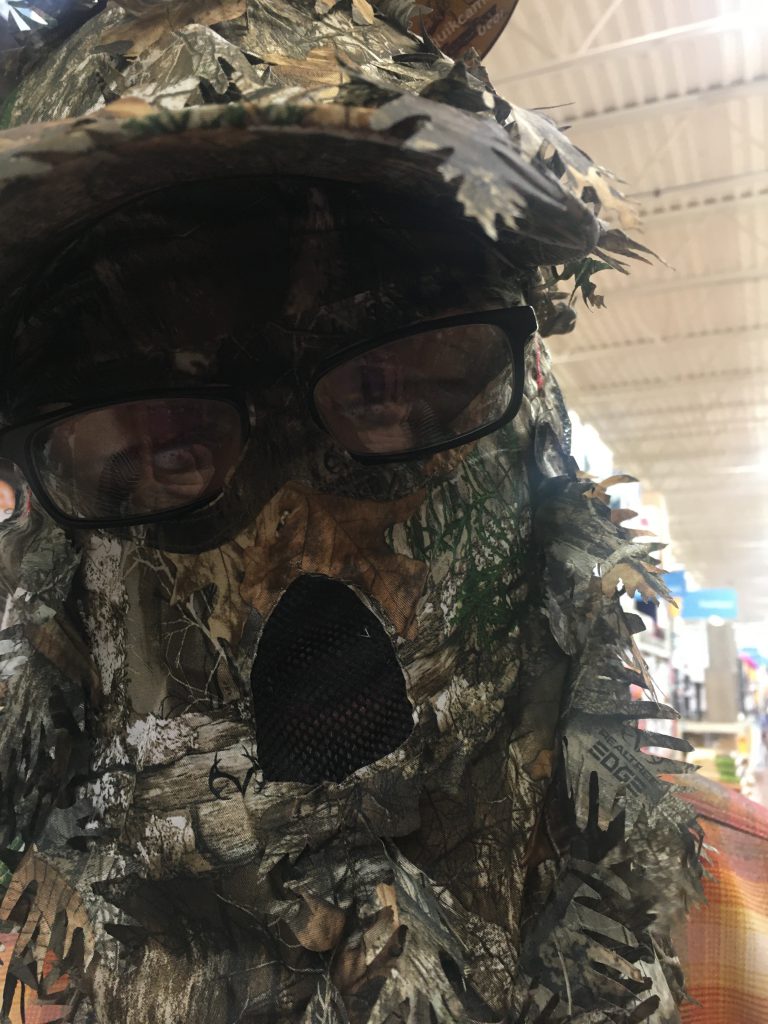 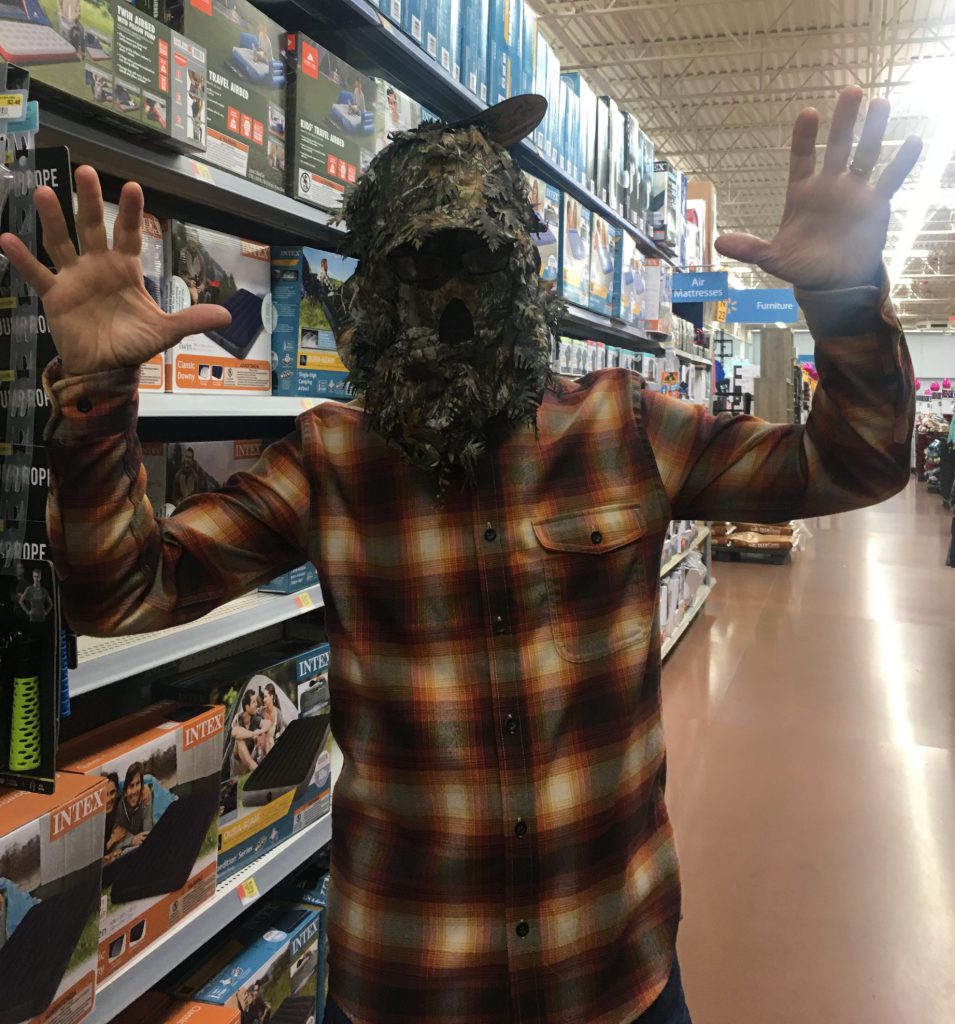 Oh what a loon!

I love him abundantly.

Tiffany and I visited my parents one day this week. It was so nice to be able to drop over for a bit and just chat. Then the next day we saw them at the chiropractor’s office (they were coming as we were going) and we talked more as if we hadn’t just spent a couple hours together the day before.

When we’d arrived for my appointment, one of the gals told me that I have a delightful family.

I think so too.

Of course that appointment was just the beginning of our errand day! We made seven more stops. We had about three more we should’ve/could’ve done but we were both tired . . . and just plain done. We were both so thankful that I’d put dinner in the crock pot before leaving the house that morning.

You know, I’m an odd duck. Yep, I am. The vega testing revealed that I am stressed. I don’t think I’m stressed but my body thinks I am. Thankfully there is some kind of cut-off switch somewhere that doesn’t let my conscious mind know that is the case.

It appears that some of the reason I’m not losing weight very easily is because of the stress. There are some other things going on too. I had him see if there was some supplement I could take to help my eyesight because I’ve just felt like something is amuck with it for a while now.

As it turns out, my body tested positively to a couple supplements and I’ve begun to take them. It seems that vitamin B5 will do a lot of good for my system and I have begun to take several capsules of that daily. Oil of Oregano is another supplement that tested as being helpful to me right now. It sure is a good thing I like oregano because a while after taking it I get a little oregano flavor burp . . . interesting. At any rate, it is supposed to help in a few areas as well. (I love it when one supplement will help in different ways.)

Another thing I was admonished to do was that double 4-letter word–exercise. Walking is a good stress reliever, as is yoga/stretching. So, I am making a daily walk a priority and when weather is against that, I have some Wii “games” that will help. Of course, Tiffany can help me with that too.

There is a lady at church that told me about a classic stretching show she does most every day and although I don’t get the channel, I did find it online a few weeks ago. I’ll look for it again and have it ready to use because the weather is supposed to be colder and maybe even rainy the next few days and I may not be able to prod myself out the door.

Well, that’s it from me today. I hope you are ready or all planned to be ready for Thanksgiving next week. I know I am.

But then Christmas will be here before we know it. I got some more of my Christmas shopping done today and hubby picked the items from my list that he wanted the kids to help him get for me, last night.

That’s a first! Usually they are the second week into December and then scurrying around.