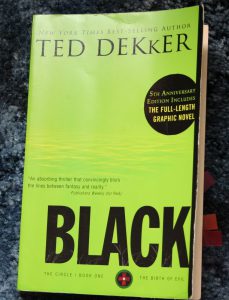 I mentioned that I finished reading Black by Ted Dekker last week. In it he talks about The Great Romance and some parallels can be made to marriage. Here is the first:

“You give a flower to a maiden, why? Because she needs nourishment? No, because she wants it.” (page 121)

This just resonated with me! For Michael and my anniversary last week I mentioned that I hadn’t gotten any flowers, to which he replied that the weekend was not yet over.

The next day he came home with a pretty bouquet and they are still bringing me joy a week later. But had I not mentioned that I’d like to have some flowers, he probably wouldn’t have gotten them.

This line from the book got me to thinking about what I do for Michael. He recently told me that he loves to receive something little when I’ve gone to the store (I generally only go once a week). I’m trying to be mindful of this and pick him up something. Why? Because it would make him happy, a.k.a he wants it.

Now of course neither of us would go off the deep end and go buy a brand new car for the other, just because they wanted it because we are not in a position to do that. But doing the little things that bring them joy is worthwhile.

This was another line that resonated with me. I should tend to my marriage daily. Intentionally.

I know this is easier to say than do. AND it is much easier in my season of life than when I had young children. But there has to be a way to be intentional with your spouse on a daily basis no matter what season of life you are in.

It can range from picking up a treat that he enjoys but doesn’t usually get. Maybe it is taking a shower with him. Maybe it is making his favorite meal or a special dessert. Or maybe just simply having dessert.

Maybe it is scratching his back, rubbing his shoulders, taking a shower with him

, or just giving him thirty minutes of peace and quiet. It all depends on what he likes, you can agree to, and fits in your budget.

I guess the bottom line is that I’m not just going to sit around. I’m going to actively woo him, in subtle ways frequently. Oh, I’m not going to be naive and say it will be daily, although that is the goal, but definitely several times each week. And I’m going to keep changing it up so that he doesn’t come to expect the little thing, so it is always a pleasant surprise. Hmmm, maybe I should make a page in my bullet journal to write down some ideas, so that I do a variety and not rely on the same ones over and over again.

I hope this sparks some ideas for you. I recommend reading Black, by Ted Dekker; his thoughts and ideas are interesting and it is a good story.