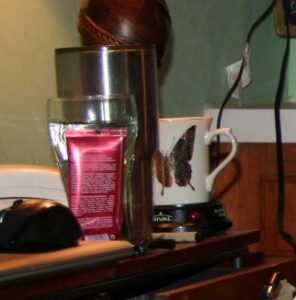 I have committed to the Trim Healthy Mama eating lifestyle. It is how I intend to eat for the rest of my life. Now that does not mean that I’ll never have certain foods, it just means that as a general rule I won’t, especially while I’m trying to lose weight.

Recently Michael and I dined at Red Lobster to celebrate our 31st anniversary. It’s amazing that I have been with him longer than I was without him.

Don’t misunderstand me, there were some tough times, and still are frustrating times, but I love him incredibly and would marry him all over again.

at Red Lobster he wanted to get the Seafood-Stuffed Mushrooms for an appetizer. We hardly ever get an appetizer . . . like I can count on my hands, or maybe even one hand, the number of times we have gotten an appetizer since I’ve known him.

I asked the waitress and she did find that they did have some wheat in them but knowing it was mostly seafood and it was our 31st anniversary dinner, I decided I could splurge on it. This added another memory and made it a bit more special. The mushrooms were delicious, by the way.

I proceeded to stay on plan with the remainder of my meal, with the exception of tasting one of Michael’s breaded shrimp.

The last time I ate something off-plan was in October of last year and it was for a similar reason. I was eating lunch with some friends and new acquaintances at a Mexican restaurant. At the end of the meal tres leche was ordered for us to all share together, in part because I and another person had never tried it before. That day I took two bites and then that was all–it was delicious and I need to find a low carb way recipe for it.

I could have been a party pooper and stayed strictly to my “diet” but I determined that these two situations were important enough and memorable enough that I should make the exception.

My hubby is wonderful to me most of the time. He makes me tea every morning, ensuring that it is the proper level of sweet for my liking. He even increased the amount he makes for me when I told him I wished I had more and found a creative solution to keeping it hot for me. He prepares a bottle of water for me on Sunday mornings and even fills my bottle with cold water rather than room temperature water, because he know it is my preference. He drops me off at the door on a rainy Sunday morning, even though I did make us late and he dislikes walking in after service has started.

There are many more ways that he spoils me but that is enough for today. Love is shown in so many ways and can be easily overlooked. I hope this will remind you to take time to do the little things for your spouse and to acknowledge the ways he shows his love to you. Love isn’t all flowers and chocolate, jewelry and public displays of affection–it can also be in the little things.