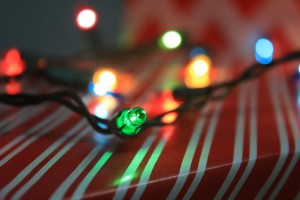 I love Christmas lights! They make me happy. Over the years I have pointed out the “pretty lights” to Mike frequently, oooooing and ahhhhing over them. I have always wanted to have the outside of my house decorated for Christmas. This is something I remember mentioning to Mike in the early years of our marriage but he did not want to do it. I can only remember one time, nearly 20 years ago, when I tried to pressure him to put some lights up. I knew I could not do it on my own, so I dropped it. I have not mentioned it in years!

About three weeks ago Mike announced that he’d like to put up some lights outside. I’m sure you can imagine my shock. I merely said I liked the idea and left it at that. As Christmas got closer and closer, I began to think it might not happen. And then just eleven days before Christmas, he bought some lights. Albeit, they were not the color I preferred, but hey, they were lights. (They were amber and the only single colored strand they had left.) I was cautiously happy.

A week went by and no progress was made on any Christmas preparation front – his or mine with wrapping gifts. Then Sunday afternoon, just four days before Christmas, he and Sean went out and began to put them up. In just a few minutes, they came back in the house. I knew something must be wrong. Alas, the strand had 225 LIGHTS not 225 FEET! (As my sister Tracie pointed out when I told her, that’s a newbie mistake.

)That makes a huge difference. But I was proud of him, as he would not be deterred.

The next day, he bought enough lights to finish the front of the house. Unfortunately they did not have any more amber ones or any other strand of a single color but again, he pushed through and bought multi-colored lights and just two days before Christmas, he, Sean, and Brian put them up. Is it done the way I would have had them done? No. But I’m glad that they are up and I didn’t have anything to do with it. It was all Mike . . . from his heart . . . not something I manipulated.

Herein is the point. I did not want to manipulate Mike into doing something that I wanted, just to have it done my way. That is not love! Love is giving of oneself. Love does NOT manipulate. Of course, I really do attribute the change in him to him praying. Spending time with God changes you.