I love having Liam here! He’s generally such a good child; I say it this way because all children have their moments of fussiness. I’m so glad he was feeling better this week. He did get congested but he seemed to cope pretty well.

He liked the toys I bought for him to have here. I figured the Little People train would be a hit because it had a few pieces he could hold. 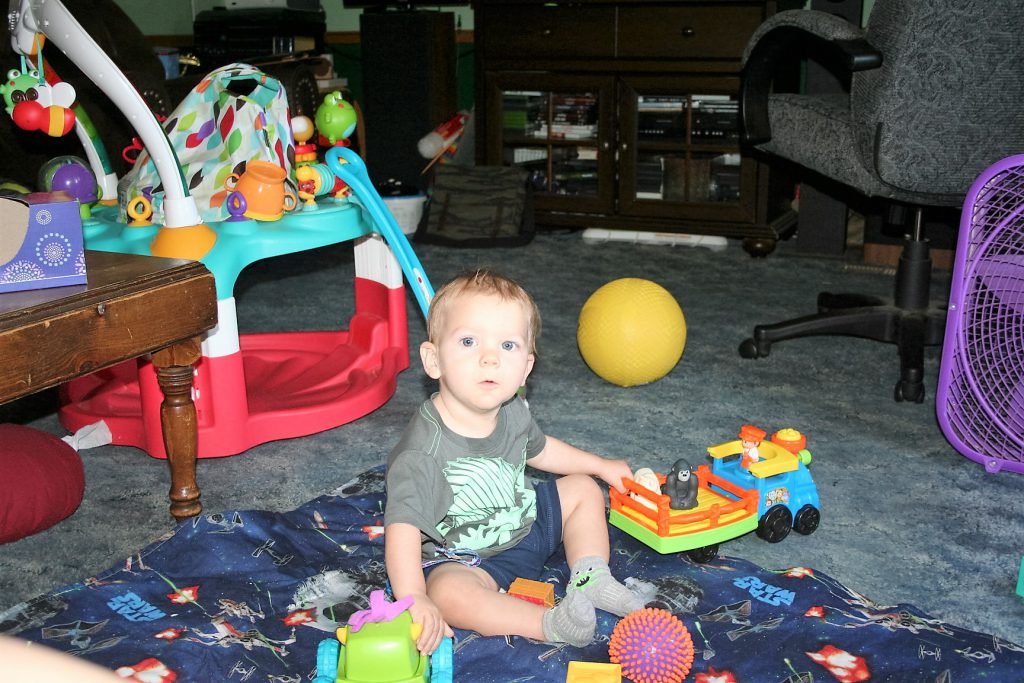 Tiffany named the conductor Francois and he frequently laughs when you say it.

He seems to like the popper too but not as much. I expect he’ll like it a bit more once he starts walking. 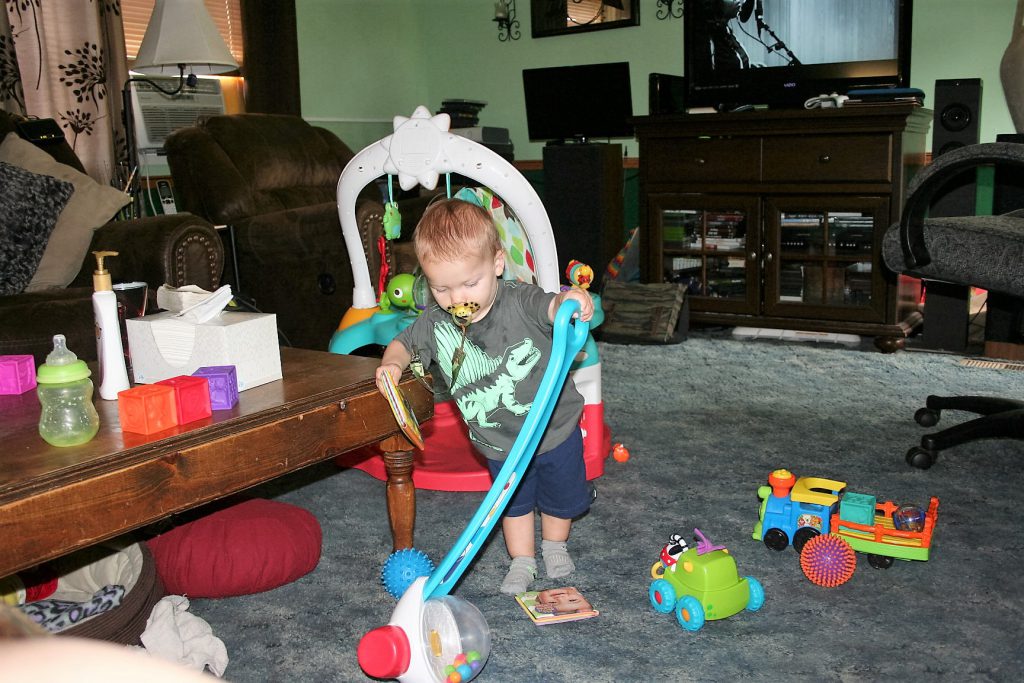 He likes balls now. Michael played with him with them. It was fun to see him so excited. 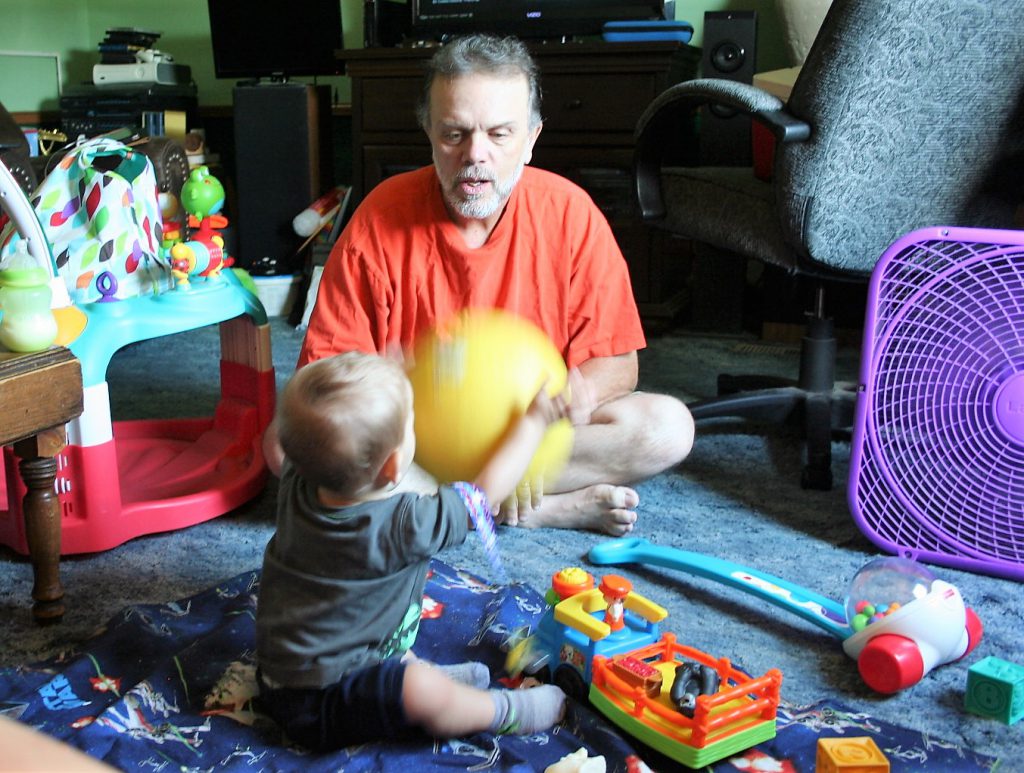 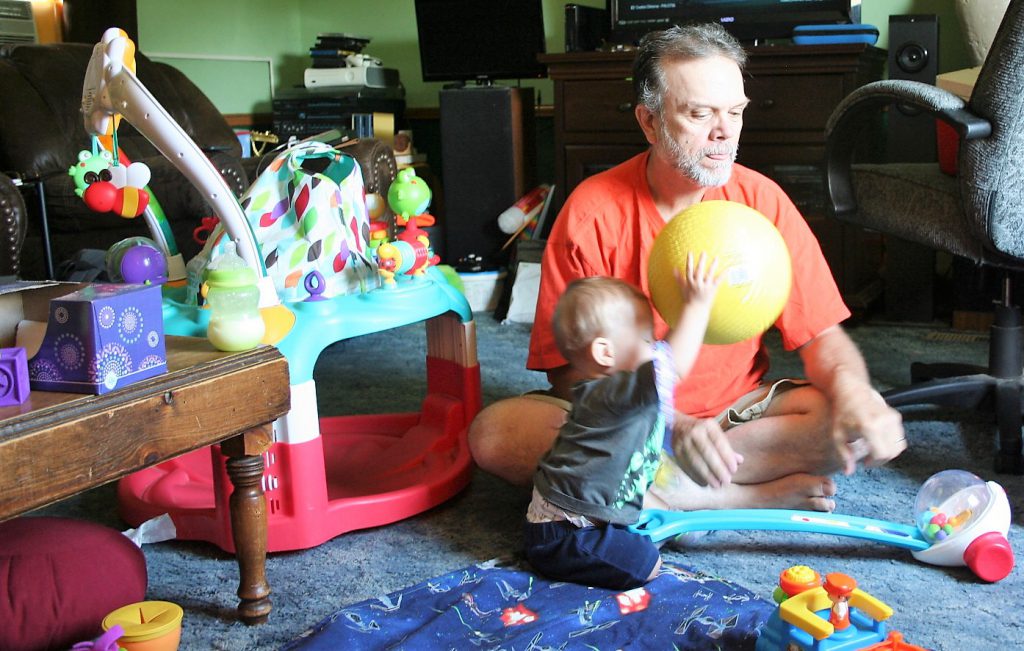 He’s so good with him! 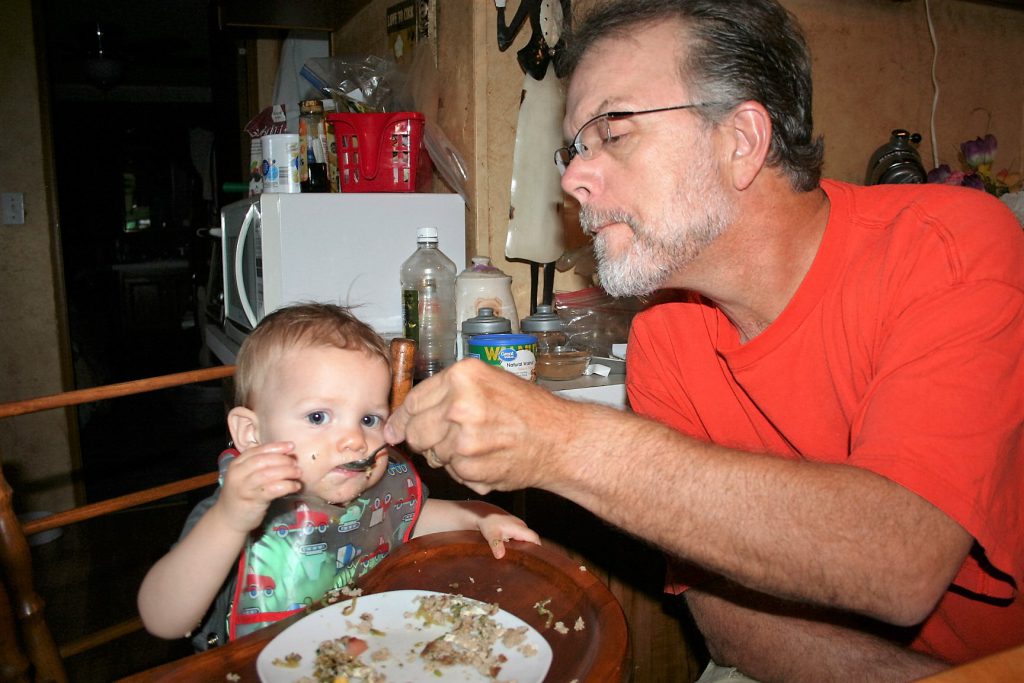 That boy loves food!!! So, sometimes we hide from him when we have something. 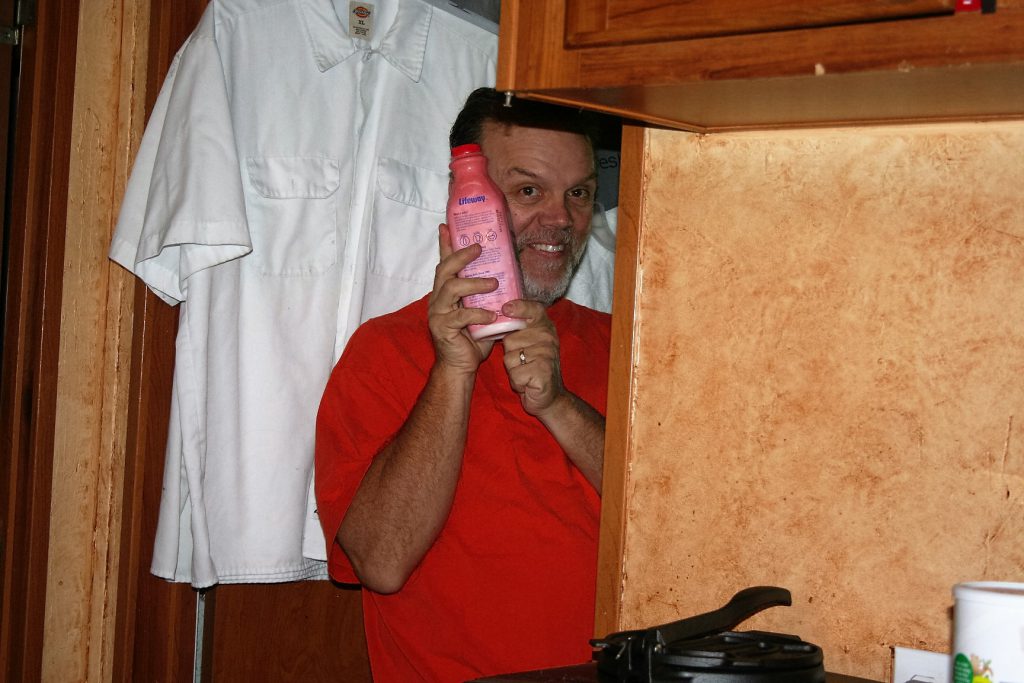 I got this little snack dispenser that keeps the snacks from falling out but has an opening for him to put his hand in and pull out a piece. It was fun watching him figure it out. 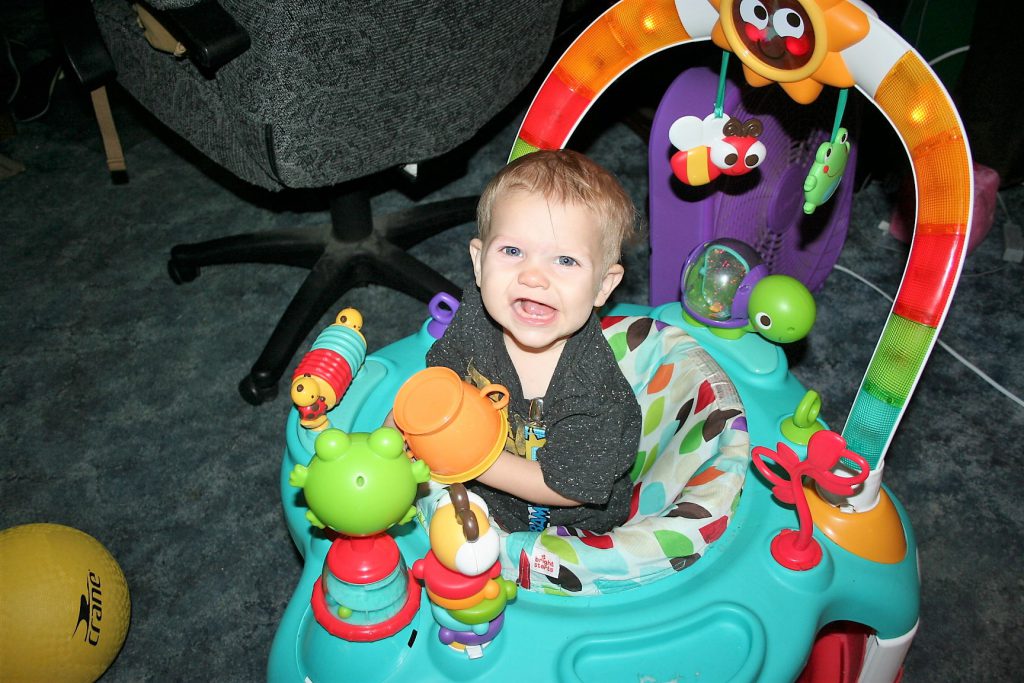 Aldi has these short skinny cheese puff looking snacks. They have veggie, cheese, and blueberry. This helps bring meal times to an end, more peaceably.

Tiffany got out some of her TY stuffed animals that she’s had put away. He seemed to like this dog. 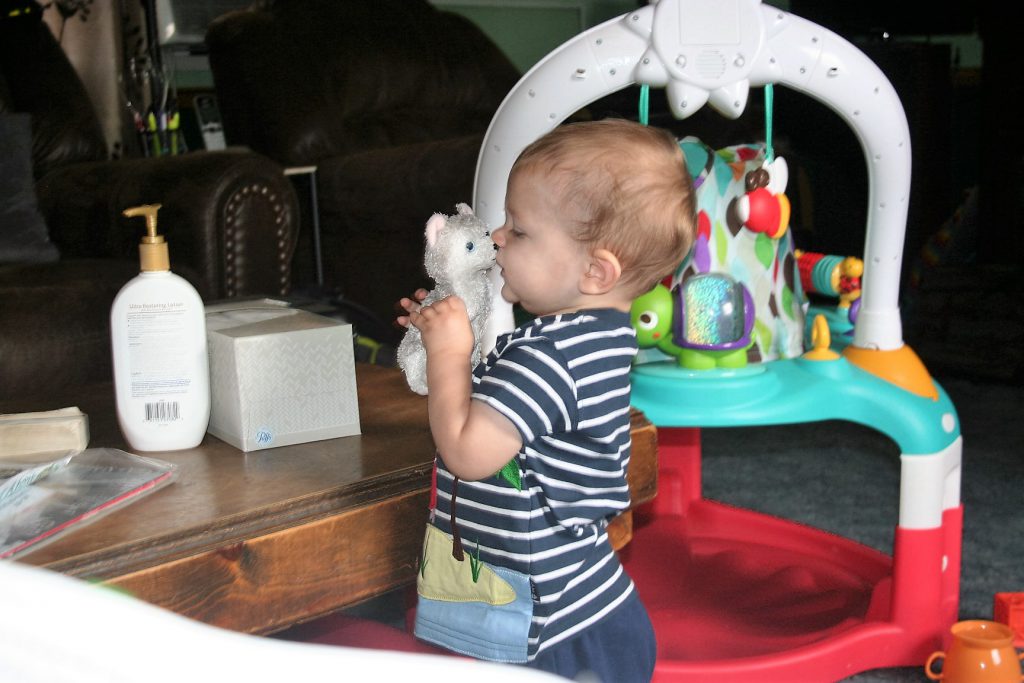 He also liked the horse but I don’t think it tasted very good.

We’ve had fun with him here.

In other news, I found a recipe for homemade bread that is Trim Healthy Mama compliant!!! Oh yay!!!

Last week I wrote about my first attempt. I added pictures of my NOT 2# bread machine and the first attempt loaf.

Yesterday I made a second attempt following her Mixer Method. Once again it was not forming a dough ball. I added flour a couple tablespoons at a time to where it was at least a little more like a dough ball but not nearly as firm as the pictures she has on her post. But I have to say, this week’s version turned out MUCH better than last week’s! 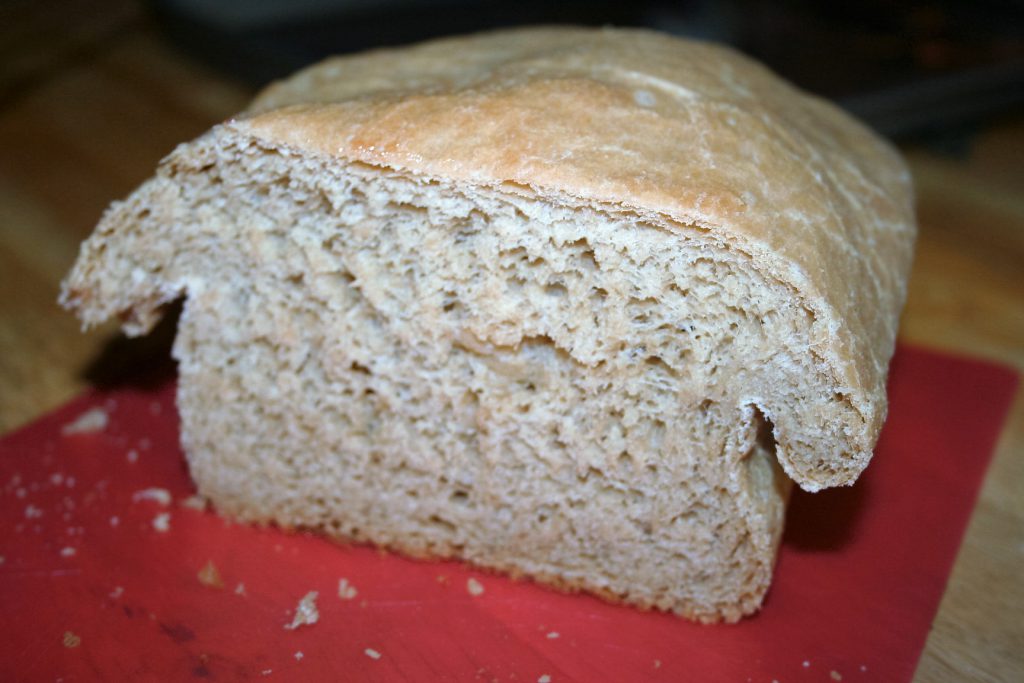 You can see how it rose over the pan but didn’t seem to have enough firmness to stand above the pan and sagged over the rim. I didn’t get it evenly split so one loaf was a little bigger than the other. 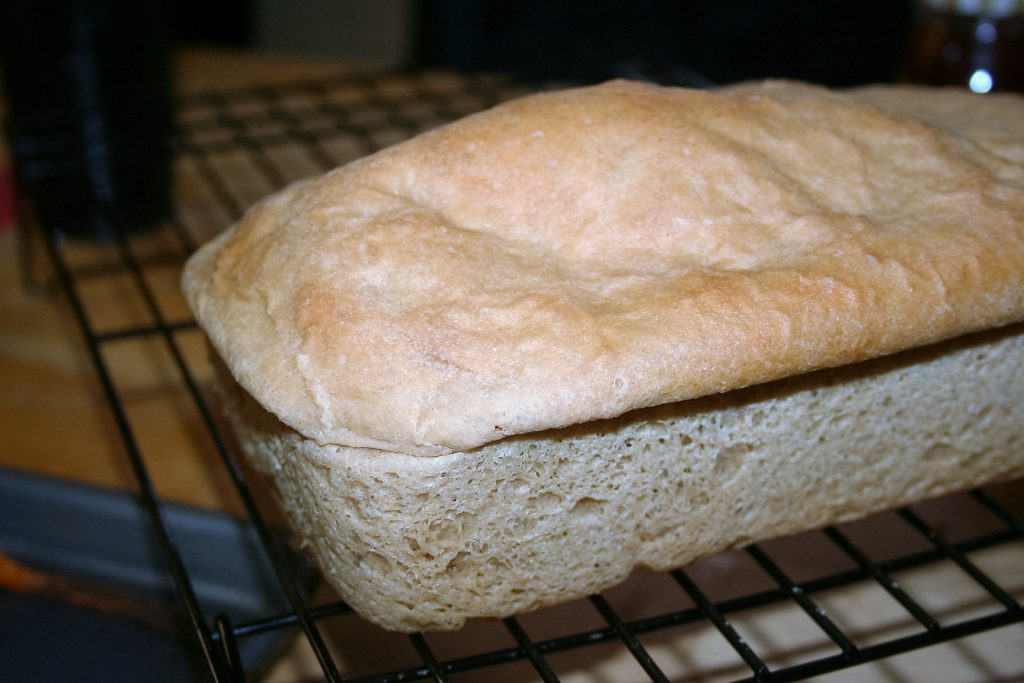 We have declared this attempt much better than last week but still looking to make improvements.

Well, I’m gonna run. Get to have Liam again today and maybe a day or two next week.

I’ll take what I can get. Hope you have a great weekend!