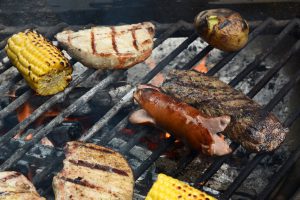 I am the type of person that follows a recipe the first time I make it. For most recipes, that even includes ingredients we don’t generally like. That is, until recently.

In the past it was just dill. I’d made some things that should have been delicious and I loved all the other ingredients but realized that the dill was ruining it for me. So for a long time, if a recipe had dill in it, I would not make it. Then I realized that I could make it and just skip the dill. For a long time, that is what I did. Then one day I got the recipe for something that I had tried before and enjoyed and found out it had dill!

Not long ago, we were invited to dinner at a couple’s home one Sunday after church. He made some herbed baked sweet potatoes. These too had dill and yet we liked them. So either our aversion to dill has dissipated or a little dill is okay now. I don’t know yet.

Cilantro has landed itself on our do not like list. However with that I will either use a tiny bit of dried cilantro or parsley. Then at one time cumin was on that list as well. I learned to substitute with either oregano or chili powder depending on the recipe. I found this by searching what I could substitute for cumin. So if there is something you don’t have or don’t want to use, do a search and use something you do have or like.

This all resurfaced again because last weekend I made an apple pie flavored breakfast dish that called for ground cloves, which happens to be a seasoning that is a bit strong for our liking. As a matter of fact, I don’t add it in my apple pie at all. Once we had a ham with cloves stuck all over it, which made for a pretty dish but the flavor was off. I even decreased the amount of ground cloves it called for by about half and still it was too strong for us but otherwise we liked the dish. I’m making a note on the recipe to omit it in the future.

Then it was another interesting turn of events when Michael became allergic to beef and pork. Wow, this really limited my options. I learned to substitute ground turkey for ground beef and thankfully it was less expensive too.

But this experience has taught me that you can substitute meat in a dish as needed.

Recently I made a beef stroganoff from the Trim Healthy Mama Cookbook (page 44). It calls for beef or venison. I happened to have some boneless skinless chicken thighs in my freezer, so I opted to use that instead. I really enjoyed it. Now my son prefers ground meat in his stroganoff, so next time I will use ground turkey. As a matter of fact, we’re having it for dinner tonight; so the picture may appear a bit later than this post does.

Anyway, all that to say, don’t be afraid to substitute a meat you do have or one that is on sale for a meat in a recipe that you don’t have. Of course, you generally want to go with something similar in cut but even then, like in the case of the ground turkey instead of beef strips, it can be done with a little textural difference. So do be sure to consider that when you make your substitutions. For many recipes calling for some form of beef, I use chicken breast instead. Of course there are limitations to this when it is a very specific recipe like fish but I have even used chicken breast in a fish recipe.

I even cook Michael some chicken breast in the crockpot seasoned like pork roast for carnitas. Oh, I’ll have to try it with boneless skinless thighs next time; it’ll give him more fat content in his meat.

I hope this post gives you the confidence to make substitutions as needed.