I talked with Lauren (my daughter-in-love) about the $10 sensory bin you can put together from Dollar Tree (that I saw on Busy Toddler). She said that since they were getting ready to go on vacation, they didn’t have the extra money to spend on it right now.

So, being the totally awesome Grandma that I am (haha), I decided to get the things as a gift to them. Oh, and I did spend a little bit more. So let me show you what I got. 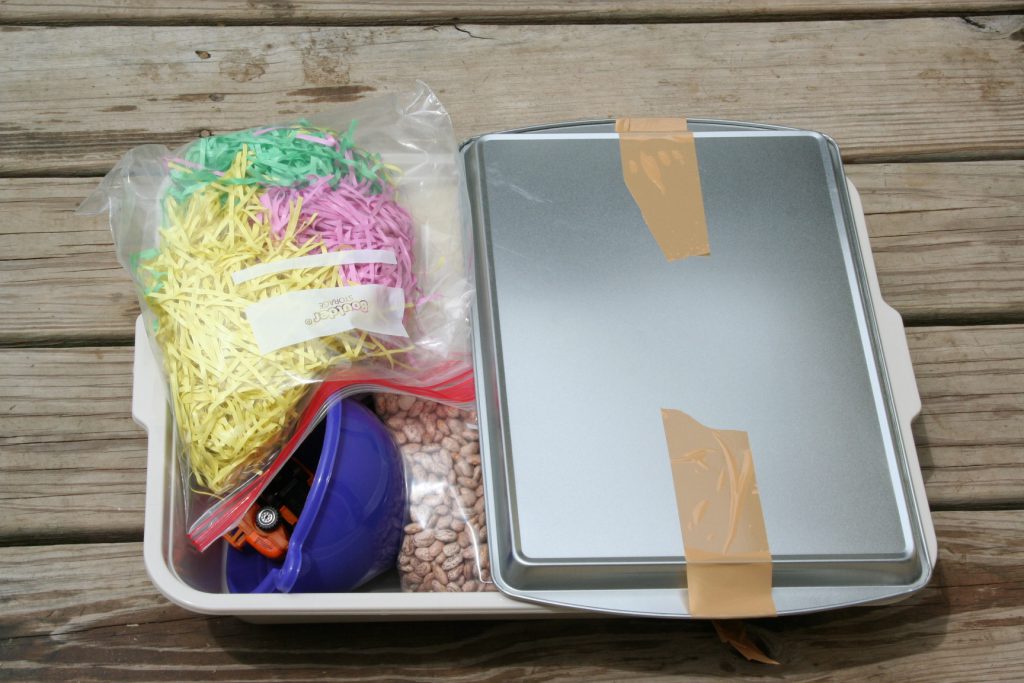 I couldn’t fit the cookie sheet and everything else in the bin, so I taped it on top to help hold everything together.

The bin itself is a cat liter tray.

I scored on the shredded paper, even though it isn’t the crinkled ones, because it is was Easter time and I got like twice as much for the same price.

Plus it has 3 different colors. 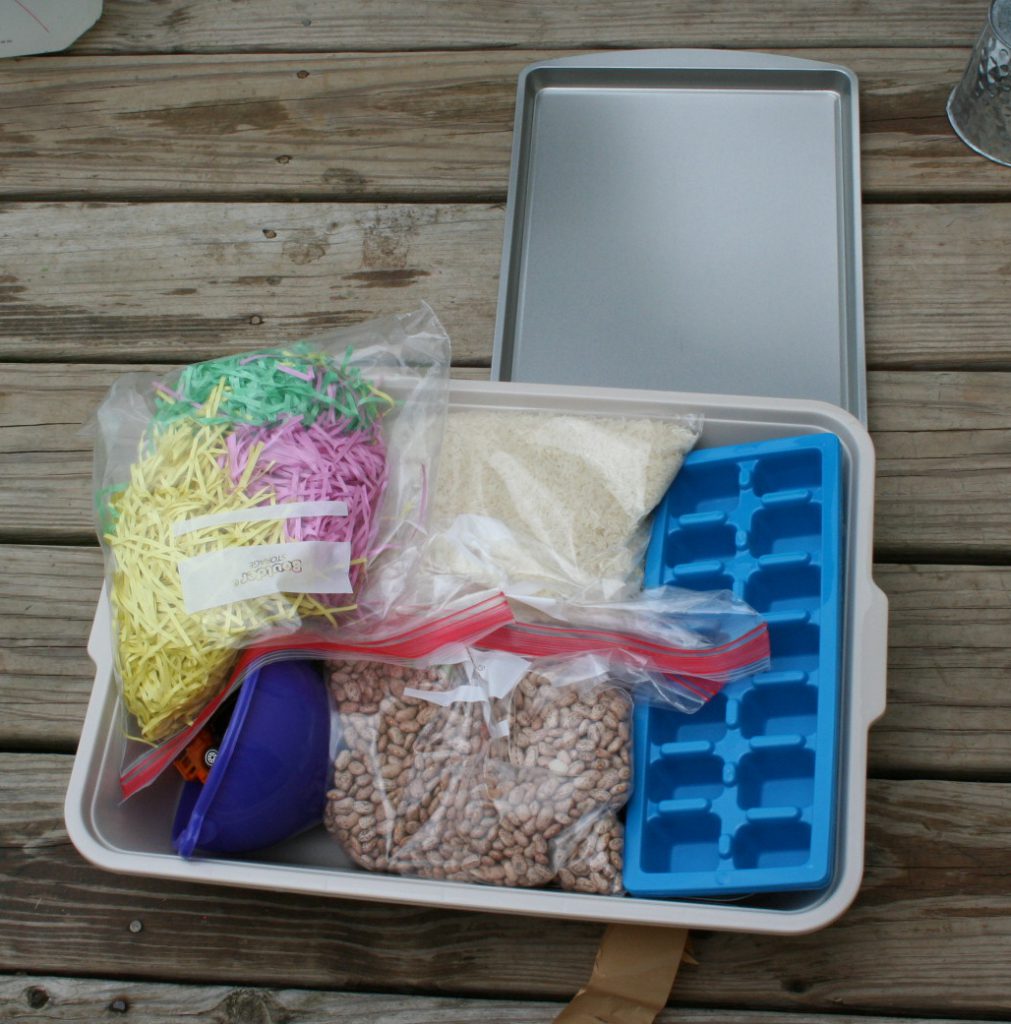 So, now you can see I have the two pack of ice cube trays for sorting things. Love good deals. I put the pinto beans and rice each in a gallon size zipper bag for storage ease but in this larger bag so that Lauren can add another bag at some point for even more scooping fun. 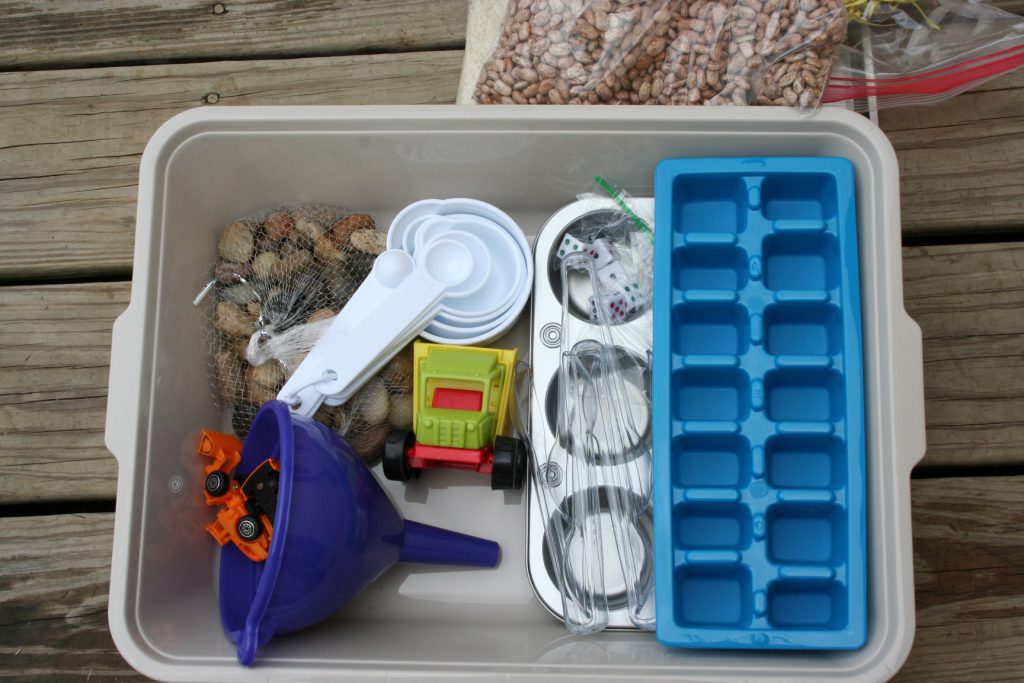 Once I remove the paper, rice, and beans, you can now see what else is in the bin. Tiffany reminded me that a muffin/cupcake tin is recommended for sorting, so that is one of the extras I picked up. Then there are the dice, which I put in a snack baggie to help Lauren keep track of them.

The bag of rocks is one of the cool suggestions from Susie of Busy Toddler. I wish there were about double that amount but it’s enough to start. Liam loves little cars and has a few of those and a set of the farm animals and dinosaurs too. Thus I didn’t get those. Instead I saw these cute construction trucks that I thought would be fun for him to play with in the rice. 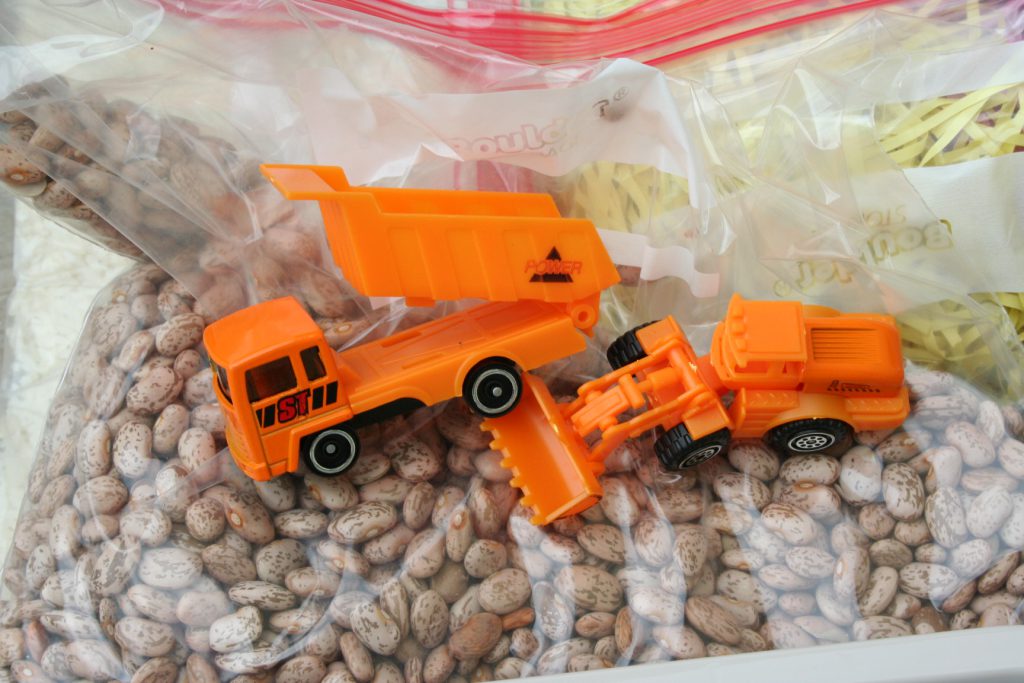 Another extra purchase was the yellow dump truck-ish vehicle. It has a nice size section that can be filled and dumped out. 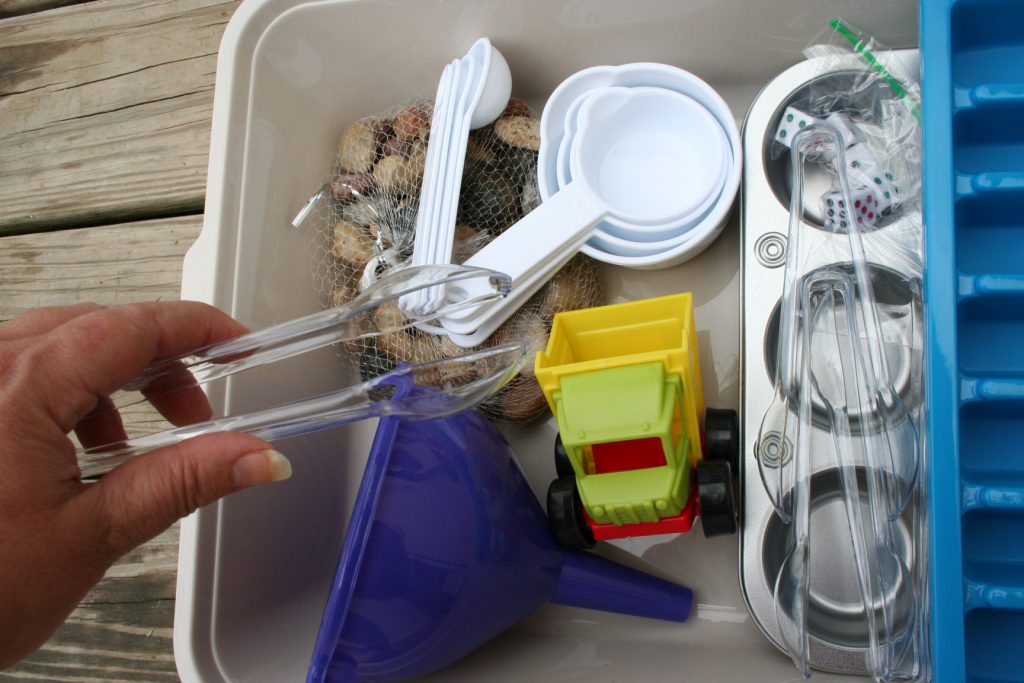 I got the recommended 4-pack tongs too. Then the other two extra items I got was the 3-piece funnel set, which is why the pan won’t sit on top of the bin evenly but I can see many play opportunities for these funnels. And the other is the set of measuring cups and spoons combo. This was another cool find because I got both sets for just $1. They can be used for teaching fractions later but for scooping different amounts in the beginning. They come off the ring for easy use but then can be put back on that ring to keep things tidy when finished. (I looked around a bit before settling on the measuring cups/spoons combo because they also sold them separately. I decided having both sets was more valuable than having them in pretty colors.

The really cool thing is that once the initial bin and beginning items are purchased, you can pick up an extra thing or two whenever to add or change up very inexpensively.

I can’t wait until he can have this and play with it. I’ll share some of the pictures Lauren is bound to send me of him playing with this fun sensory bin.

Once the sensory bin items are purchased here are some links on Susie’s site to see what to do next.

There are tons more ideas on her site and around the internet in general. But one thing is for certain, start out with your sensory bin on a big sheet, blanket, table cloth, or shower curtain (which is available from Dollar Tree too

) to help control the mess when first starting out with sensory bins.

For my grandson, I’d recommend the large rocks for the first base to use. Maybe use his cars with it and the trucks. Of course there’s the tongs and the ice cube tray or muffin tin too. So much fun ahead!

If you make a dollar store bin, let me know in the comments below.