I like miniature golf but it is way too crazy hot in Oklahoma to play outside. Several years ago we went to an indoor neon mini golf  with Brian and Lauren and really enjoyed it. Then a couple years ago when our friends came we for a week, we went to Incredible Pizza in Tulsa to play their indoor mini golf; it too was neon but not nearly as cool as the one we played in McAlester.

Any way, we needed something fun to do when we went to Edmond to celebrate Brian’s birthday and Incredible Pizza was the winner–mostly because of the mini golf.

We went for dinner because they have a deal where you buy an $18 game card and get the buffet for 99¢. Yeah, that’s pretty good for dinner. 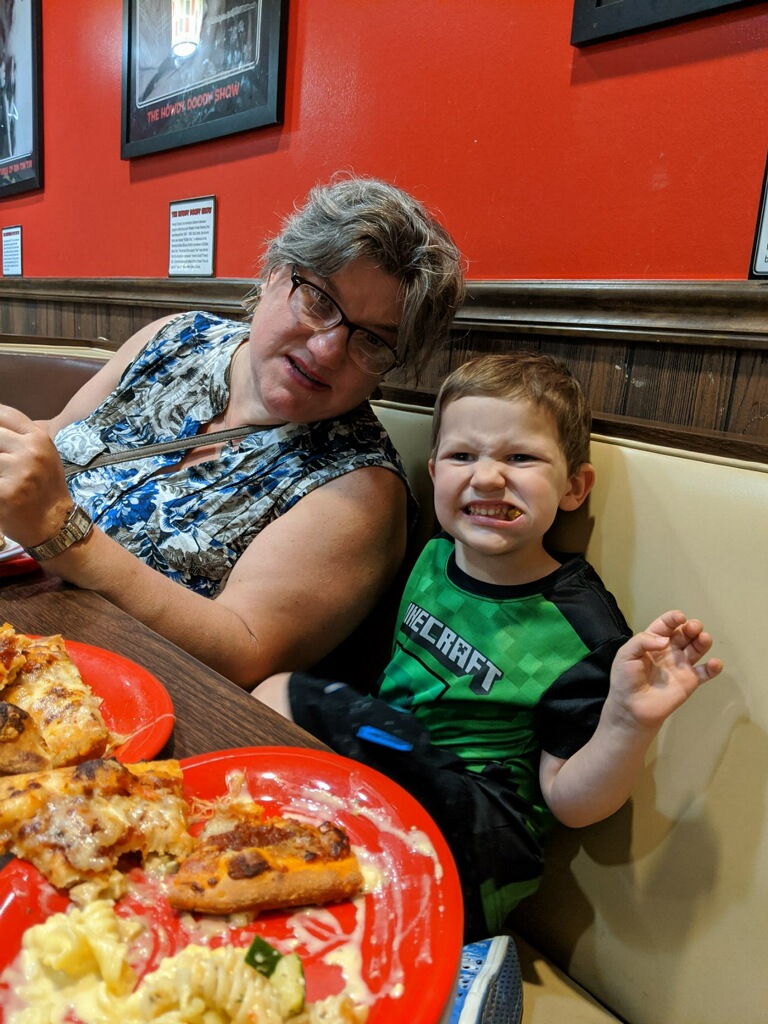 I promise, I wasn’t mad at all.

I’m just not very photogenic. I did not eat on plan at all. I did eat a salad but I decided to just have fun and eat whatever I liked. Unfortunately, I ate a little bit too much.

After we ate, we played mini golf. Yes, it is a bit expensive for just eight holes ($4.50 or $4.00) but it was fun and we weren’t outside in the sweltering heat. 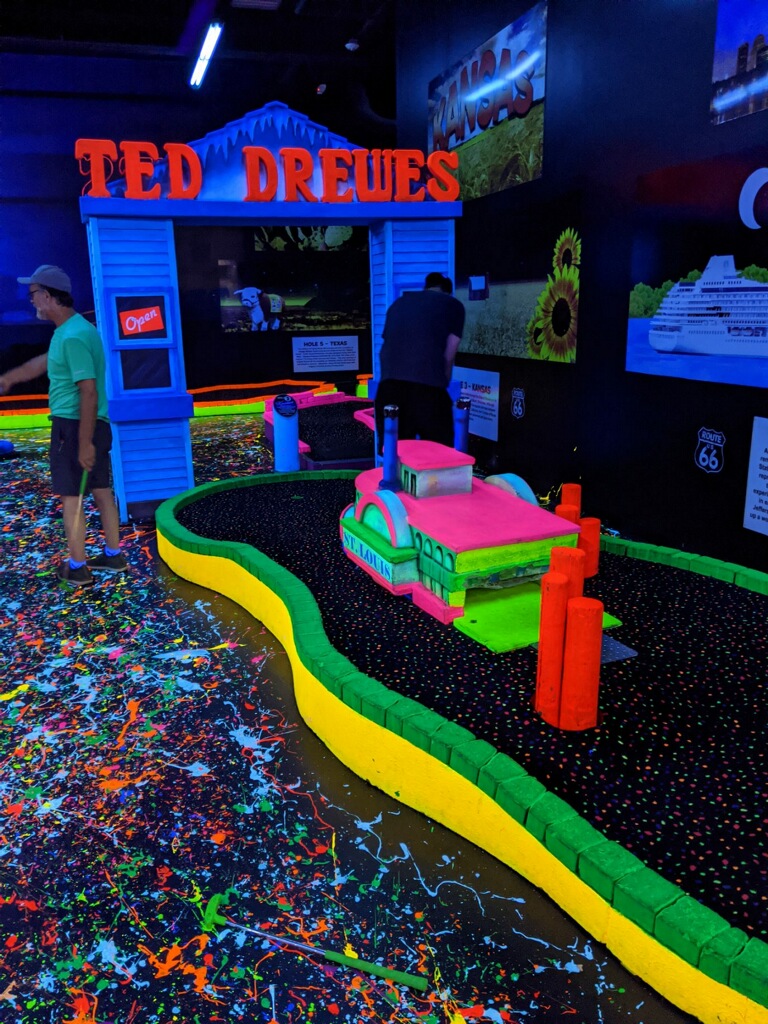 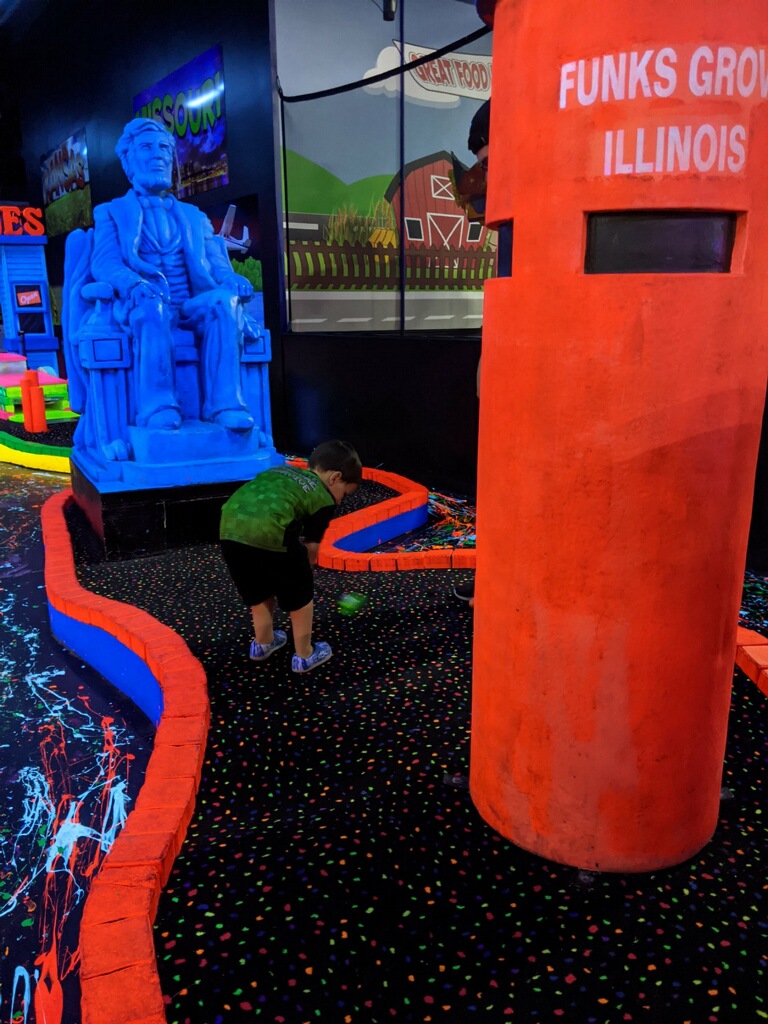 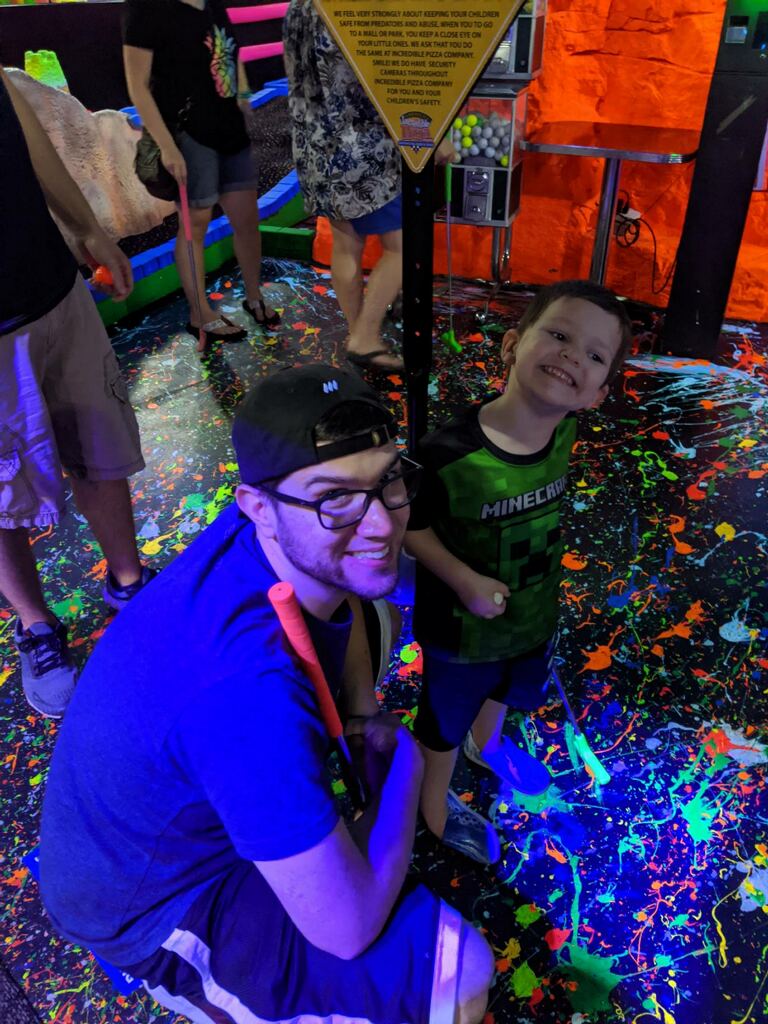 Lauren beat us all this time! She even got a hole-in-one on the last hole!

Unfortunately they didn’t have score cards, so we used my phone and just kept a running tally of what we girls scored. The guys played together a hole ahead of us. 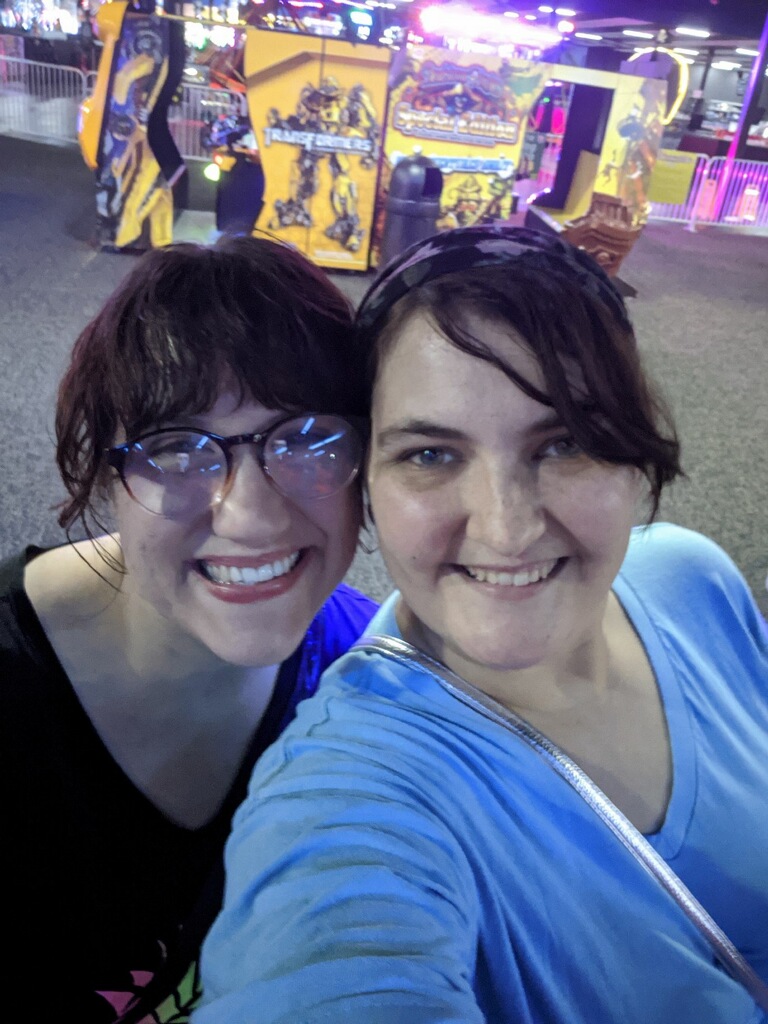 Those are my girls! Love them to bits.

After we finished that, Brian and Liam played a game together. 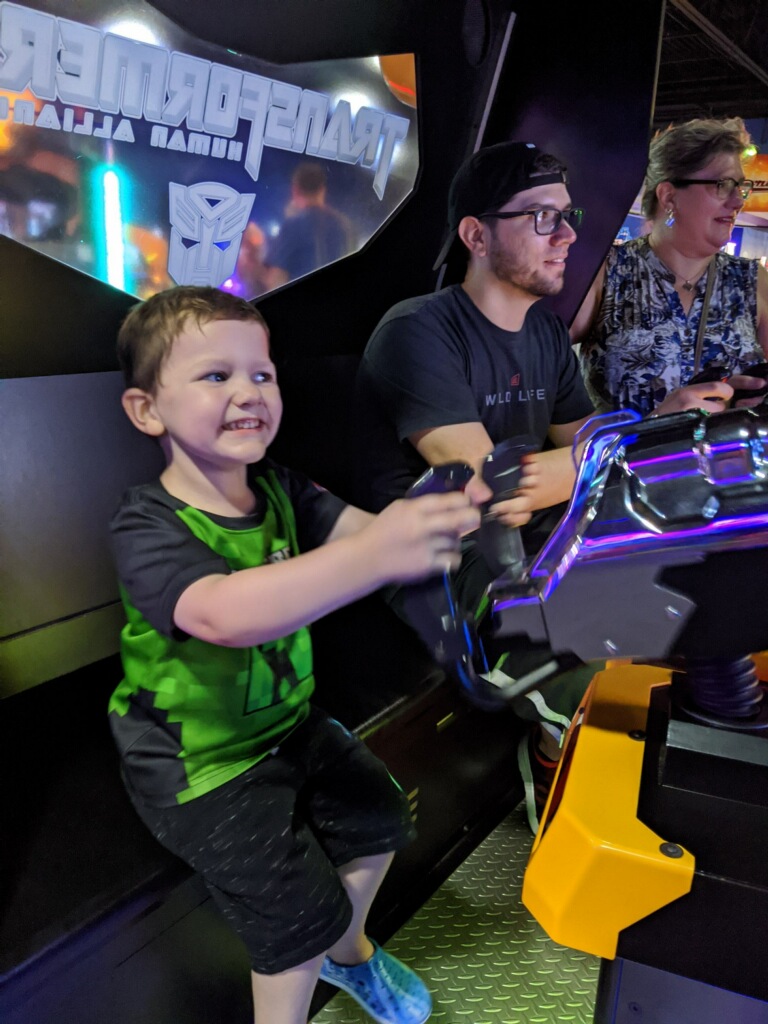 He was having soooo much fun!

Then the guys and Tiffany played the virtual reality game. It too was expensive but they really really enjoyed it. 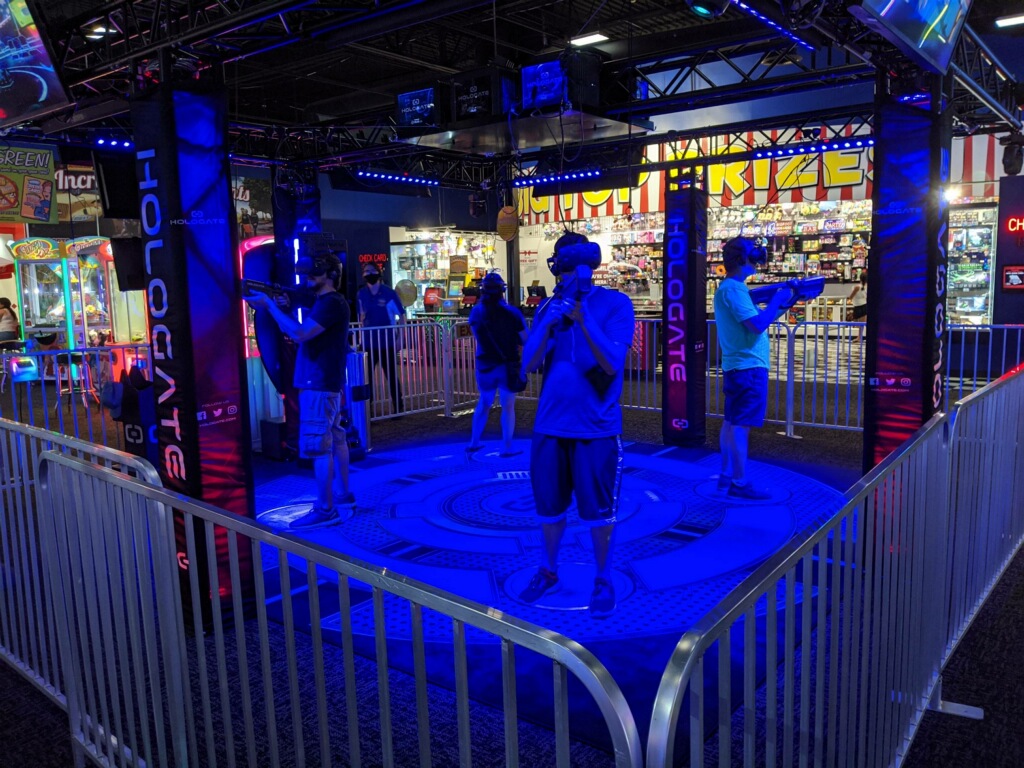 At one point they were all down on their knees. 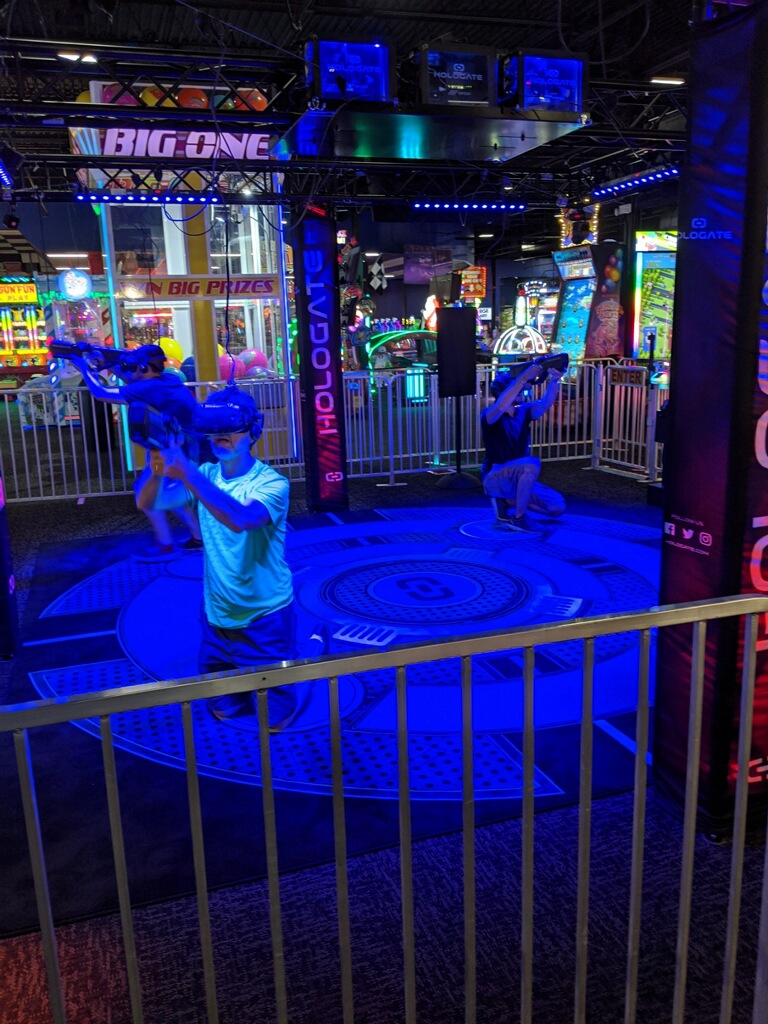 We played the mini bowling and we all played different arcade games. Lauren and I played some air hockey (I won

). I always enjoy air hockey and skeeball, which we also played. I’m not really any good at any of it but I had fun.

Michael and Liam both rode motorcycles and were in the same game together. So fun! 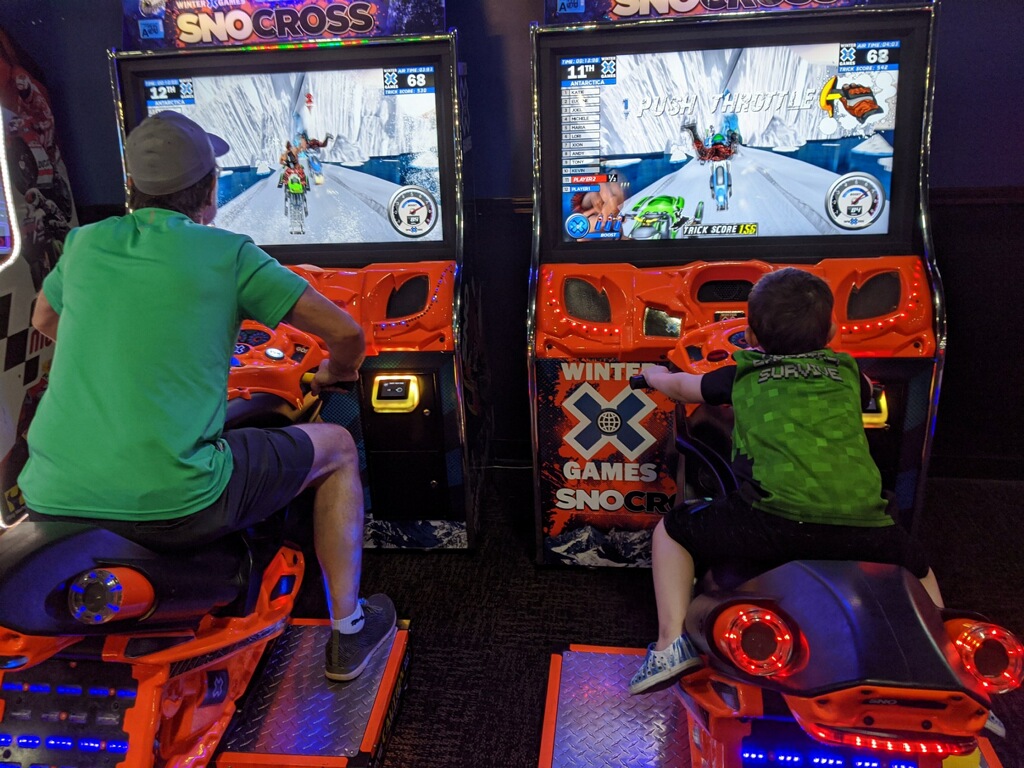 There really wasn’t anything I wanted to play, so I took Liam over to the kids ride section and let him ride. 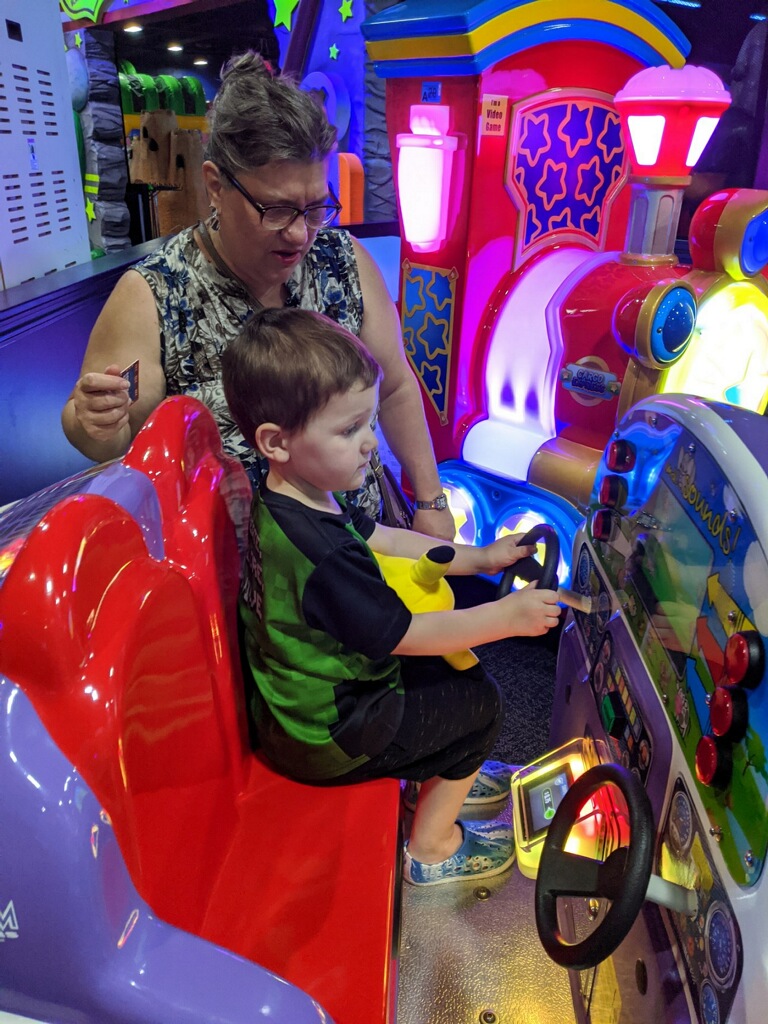 There was one that we both did together too.

It was a fun day and we enjoyed ourselves. It wasn’t crowded at all, which was nice. And it was nice and clean.

After we left there we checked into the hotel and went for a swim. It was a good bit of exercise.

I took a book with me and enjoyed reading it after showering.

We had the air conditioner set pretty low because we all like to sleep in the cooler temperatures. It was a good thing because a storm came through and knocked out the electricity for about two hours! Consequently we did not roast.

I’ve stayed at this hotel before and remember the beds being a bit softer. Of course that was quite a few years ago. This time the beds were quite firm! Ugh!

We had hoped to swim before checking out in the morning but they don’t open the pool until nine. We decided to go get a little something to hold us over until brunch with Brian, Lauren, and Liam and were extremely glad that they were treating us to brunch because there was NO hot food. Yep, no sausage, biscuits, waffles, bacon, or eggs. Just some muffins, fruit, quick oats, cold dry scones, and cereal.

We met them at Neighborhood Jam and had a delicious breakfast! The Heap was delicious (not on plan but delicious)! I got pulled pork as my choice of meat on top of my hash browns with pico, avocado, cheese, and a biscuit with two eggs over easy on the side, by request — usually the eggs are served on the same plate. It was scrumptious! I think everyone enjoyed their breakfast. (I wrote a bit more about the wonderful food at Neighborhood Jam here.)

It was a really good time spent with family and look forward to next time.

Oh, we did end up going to the water park with my sister and her girls but it rained and we got day passes to use another time. At least we had about 45 minutes in the pool before we had to leave. The kids went down the slides, over the obstacle course, and down the lazy river at least once before the siren blew to get out of the water.

We got out and ate our lunch before it started to actually rain and then moved to the car. We sat out there for about another half hour before we could get our passes. It was nice to visit together and look forward to working out a time to use those day passes without a threat of rain.

Well that’s it for me today. I hope you have a good weekend. No clue what we are doing but I’ll enjoy myself, whatever it is.