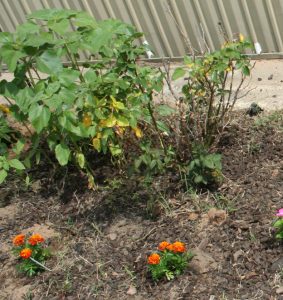 (The big green stalks on the left are self-seeded sunflowers.)

Michael and Sean had just brought home a new pair of pruners/trimmers and I wanted to go out and use them. I specifically asked for ones that were spring loaded because my last pair was not and you not only had to push the handles together to cut but you had to pull them apart again, which is quite difficult for a one-handed tool. It was cumbersome; thus I requested a new pair.

Well, I was outside for about 5 minutes or so trying to get the darn things to work, to no avail, when I came back inside to get the directions on the package that I had left inside on the coffee table. As I headed back outside Michael encouraged me not to stay out too long since it was so hot out. I assured him that I would not.

I finally figured out how to work the crazy things and successfully removed some dead stems. Then the crazy weeds grabbed my attentions and I began pulling them out. They are a particularly aggressive type that grows not only grasses sticking up but also runs roots horizontally and just takes over the place. It has overrun my garden on more than one occasion and I’m really trying not to let it happen again this year. Hence I pulled them out before moving on to the new rosebush that they had just planted for Mother’s Day.

While I was pulling weeds, Michael came out and admonished me to come in. You see, in years past I may have pushed myself a tad too much and got a bit overheated and it took me a bit of resting, once inside, to recuperate but this time I’d only been out about an additional 5-10 minutes. I again assured him that I would not be much longer and proceeded on to the rosebush. Since it is a new bush, it didn’t need much pruning. I pulled a few more weeds and headed out to my last rosebush, more like rose stems

Michael came out again, but this time with a glass of water. I was nearly finished so I did not stop what I was doing. We joked around about me being stubborn and I should come get the glass of water. I wanted the water but needed to grab the package directions for the pruners that I’d tossed on the ground since I was finished and ready to go inside.

Now I tell that whole story to show how important perspective is. You see, my first instinct was to be upset at Michael’s insistence that I not stay out too long and that I would overdo it. It felt like him being overprotective or him thinking that I didn’t know not to overdo it.

And that feels belittling. BUT I decided to see it for what it really was: Michael loves me and he doesn’t like to see me hurt in any way, so he looks out for me!

He loves me! That perspective is so much better and more realistic actually. He does all that because he cares, not because he doesn’t think that I cannot think for myself. He’s looking out for me, as a good husband does.

Could’ve been annoyed and actually fought that feeling the other afternoon when I went outside to prune my poor rosebushes and remove some spent blossoms. I hadn’t been out there but maybe ten minutes when he came out and encouraged me not to overdo it.