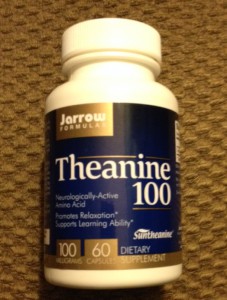 I’m fifty-one years old. I’m going through the change of life, finally . . . thankfully! Over the last several days I have been emotional. I’m not usually a very emotional person. Passionate, yes; emotional, not so much. Earlier last week I was dealing with depression. Thankfully I don’t usually have to deal with that but last week I did. One day it was bad enough that I had to confess it to Mike, who graciously did goofy things until I was laughing.

The last two days has been tough. Everyone was either making me angry or hurting me to the point I was on the verge of tears several times. They weren’t really doing anything that was different from normal, it was just me being emotional. Had I not known this I could have let it build a wedge between Mike and I, and even my kids, but today is Marriage Monday, so I stay focused on just Mike and me.

When I was realized that I was the common denominator in all the situations, I decided that I would take some l-theanine and St. John’s Wort, which are both mood supports. (SAMe is another supplement that is supposedly helpful for mood health.) These help once they get into the system but until then I had to make extra effort not to take offense at anything because my family is NOT against me.

So I guess my encouragement to you today is to be aware of your body and what you are going through so that you don’t take something the wrong way and cause harm to your marriage.

In the end, I tried to make up for my emotional state by making a homemade Devils Food Cake from scratch for dessert last night. I believe all was forgiven.

Truth be told, I was playing a game yesterday afternoon and one of the items I kept seeing was a Devils Food Cake and it made me want some. I mentioned it and was met with both Mike and Sean telling me what a good idea it was for me to make one.