Wow! You all were so kind in your comments last week. It is always so encouraging to read what you have to say about what you liked and if you have any suggestions for my improvement. I’m still so new to this, in my opinion. So thank you! Thank you so much!

This week’s diva challenge is a duotangle which means I cannot really combine it with any other challenges this week. Although Shading Zentangle has a watercolor challenge this week and I might could attempt combining the two but I think the results would not be as desirable as hand-picking tangles to attempt Jo Flaherty’s style, which is more inclined to large open tangles than ones with a lot of little lines.

So first up is my Diva Challenge tile. I put Paradox in a triangular shape on the bottom half of my tile and then Diva Dance: Rock’n’roll above it. I should’ve put it so diva dance overlapped paradox instead of the other way around but I dealt with it.

Diva Dance Rock-n-Roll is not my best tangle so I googled it to get inspired. I found this simplified version: http://www.everythingis-art.com/2016/11/divadancesimplified.html and did something similar.

I took several work-in-progress pictures this time, since people seem to like them a lot. So here we go. 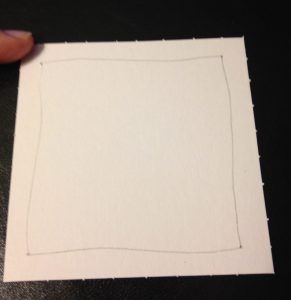 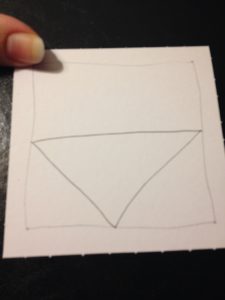 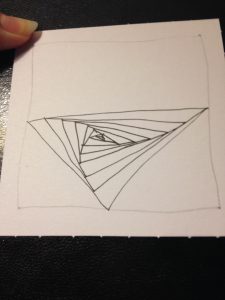 Here’s the finished tile before shading. 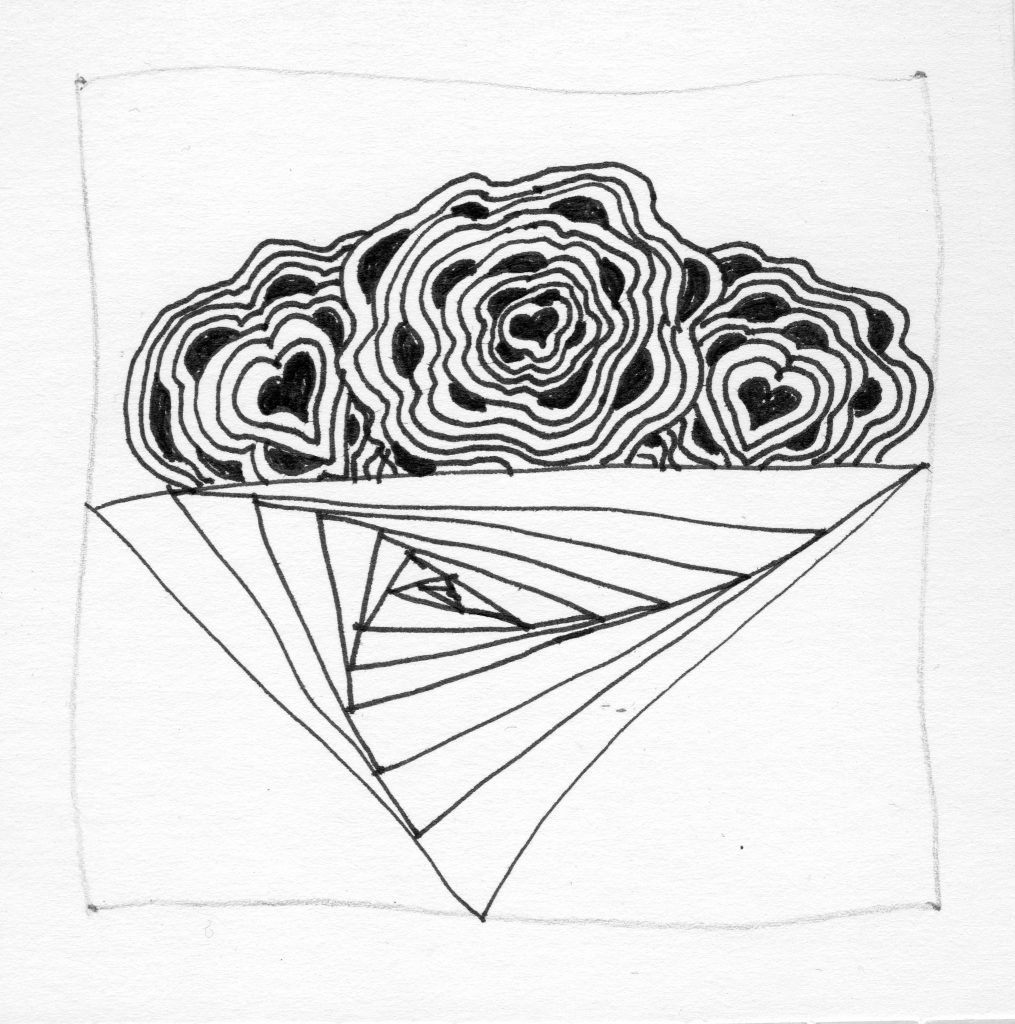 I struggled with the shading of paradox. I erased it twice and ended up doing it the same way again. 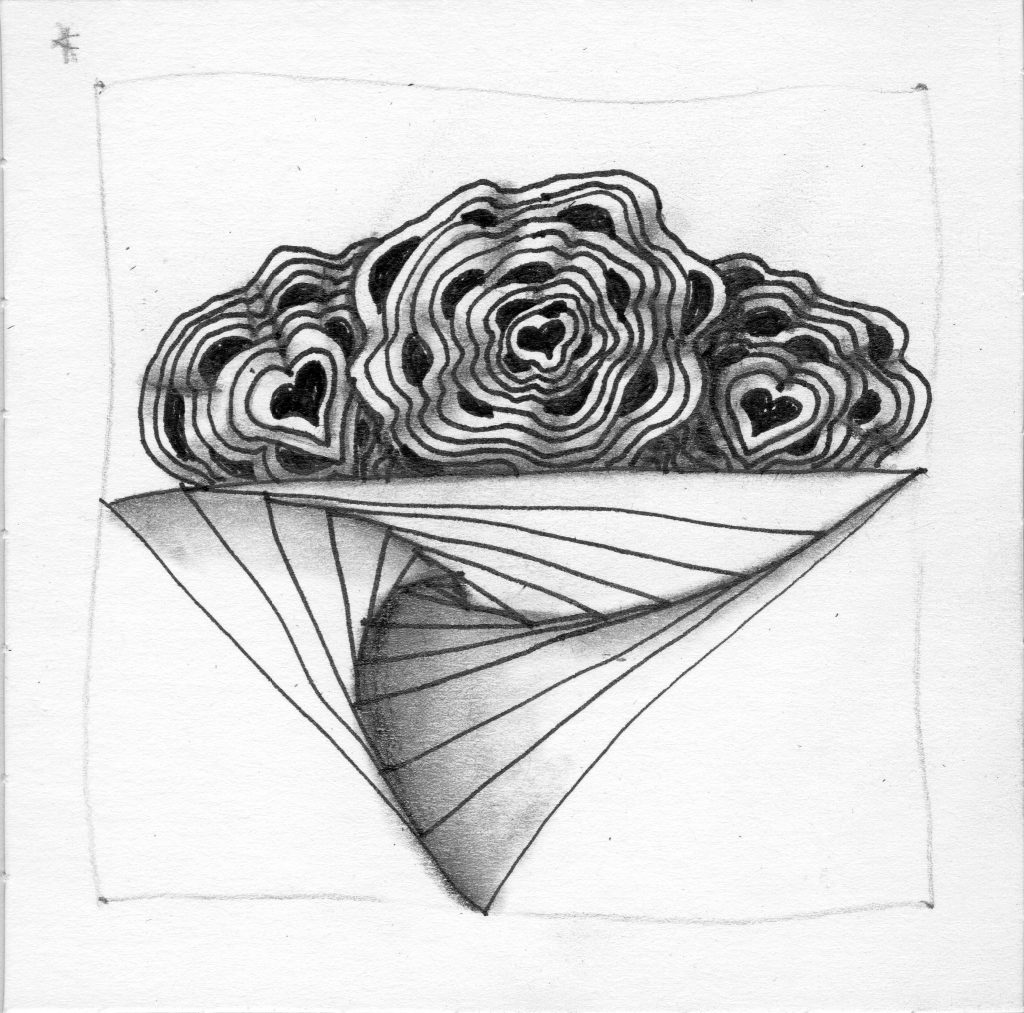 I didn’t sign it because I wasn’t sure if I was done yet. I considered putting paradox on both bottom corners as well but in the end decided to just leave it. I was afraid of messing it up AND I wanted time to play with the small set of Tim Holtz distress markers I got for the Shading Zentangle challenge.

So the first step was to pick some tangles that were large and curvaceous. I collected a few. Here’s a lazy picture of my notes, I’d already uploaded my work-in-progress photos from my camera (an iphone and computer is not, so it likes to be finicky), had my dried tile on the scanner bed and had gotten comfortable in my chair to get down to work. So I used the laptop camera to get a quick snapshot, so it isn’t the best but at least you can see what I had noted. 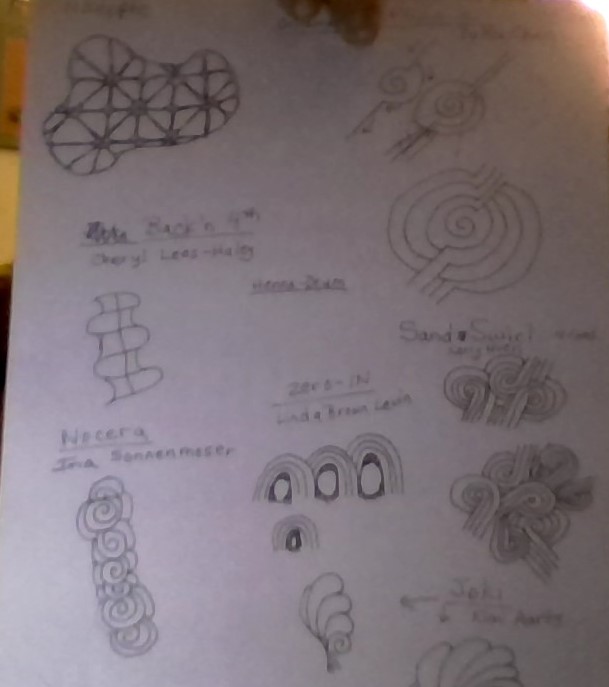 I ended up going with the elongated version of Joki by Kim Aarts, Flips-C by YuRu Chen, and ‘Nzeppel an official Zentangle tangle. I didn’t want to make Joki so big that there wasn’t any room for any other tangles; so I ended up making it a little bit on the small side.

Learning from that opportunity, I drew Flips-C a bit larger. Then I added ‘Nzeppel behind it all, making sure that I made the grid large. Unfortunately, I think it ended up being a bit too large. Oh well, lesson #2 learned. 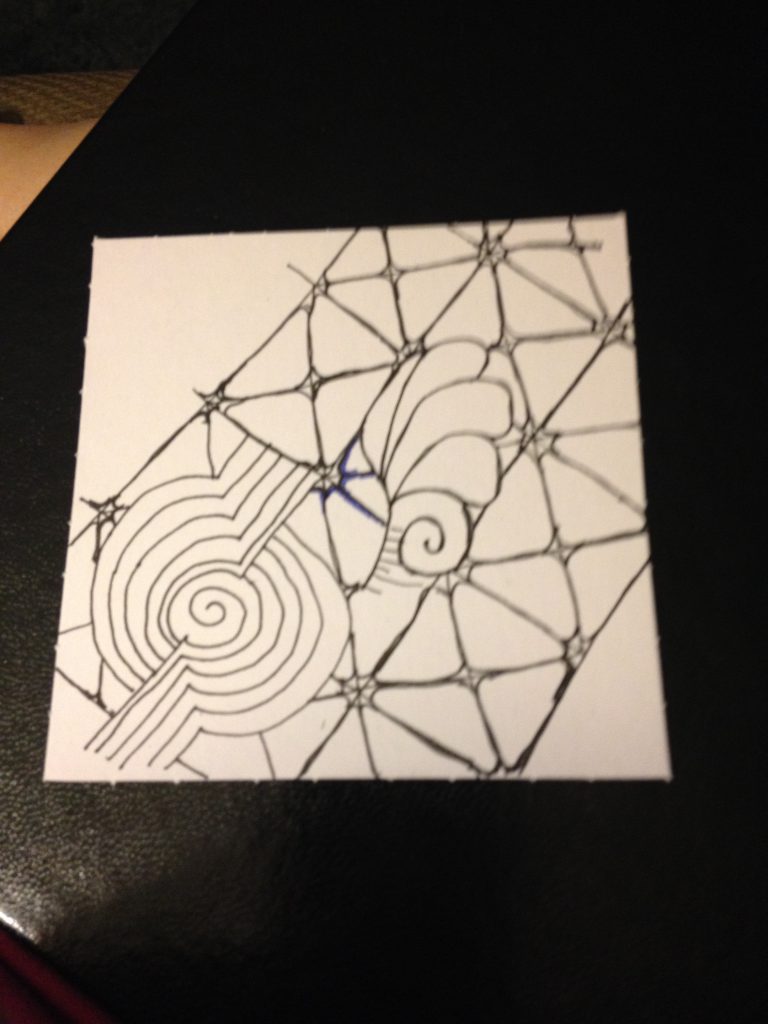 It's a little blurry because I was too lazy to get up and put it in the scanner, so I just took the picture with my phone and it must've shook a little or something. Oh well, at least it's here.

Then I started adding color. This is the first time using these Tim Holtz Distress Markers, so I didn't know how dark or bright they'd be or even how to use them really. 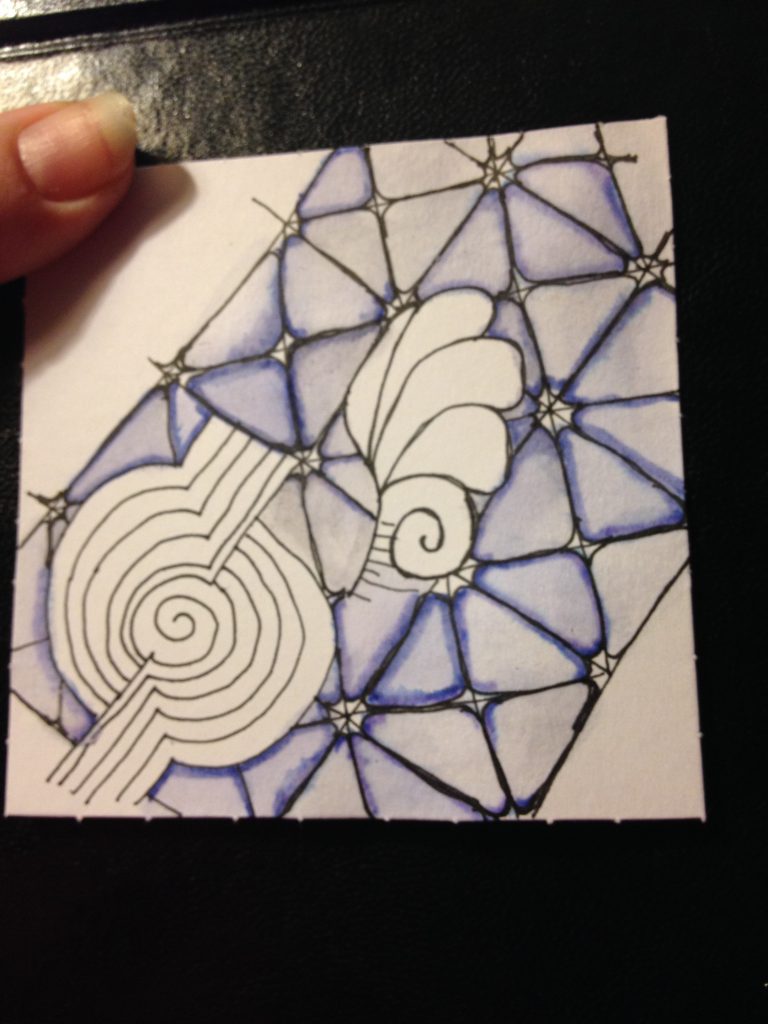 I almost think I should have left it like this. 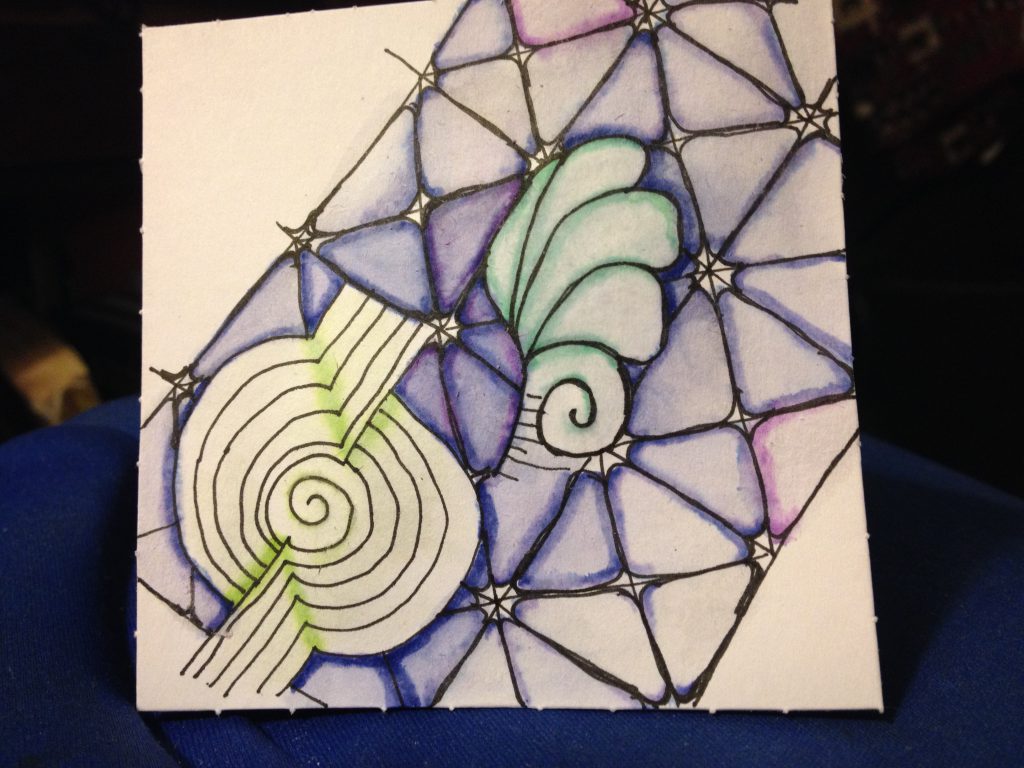 Here you can see I started adding some purple to the outer sections of 'nzeppel to give it some contrast. 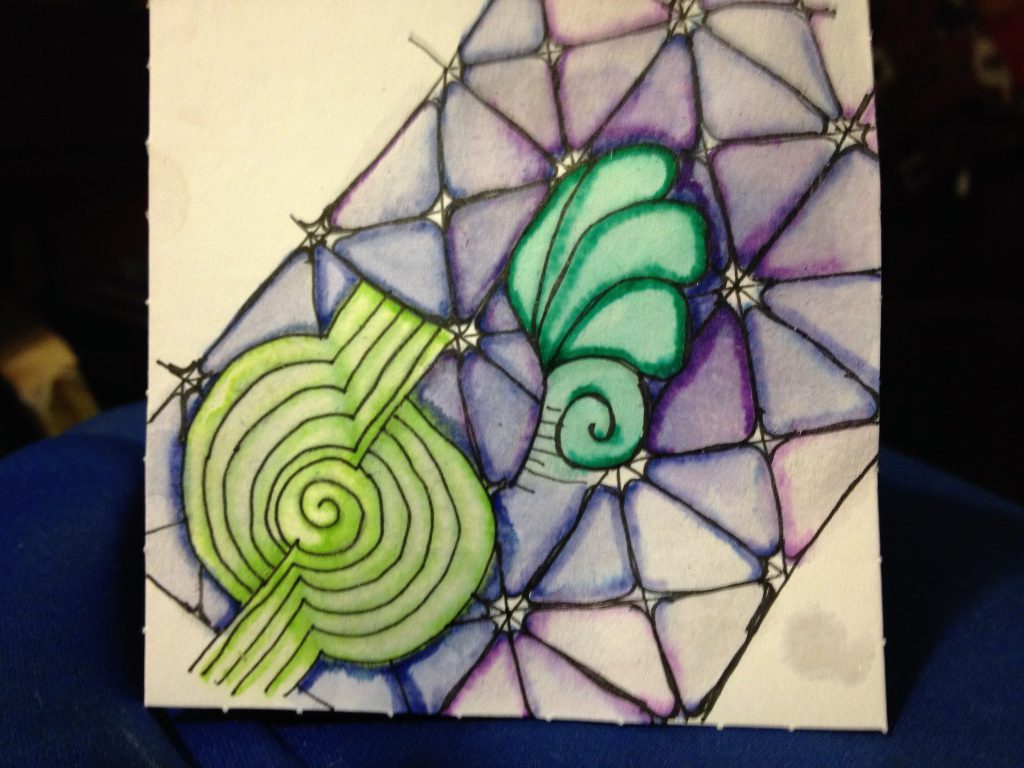 By this time my paper is getting a bit ripply. Then I notice that Jo said not to use very much water, but I was struggleing to get the color to blend out.

Then I added a bit of dark green to the flips-c and that stupid edge line in purple. Sure wish I hadn't added that last one. Oh well, another lesson learned. 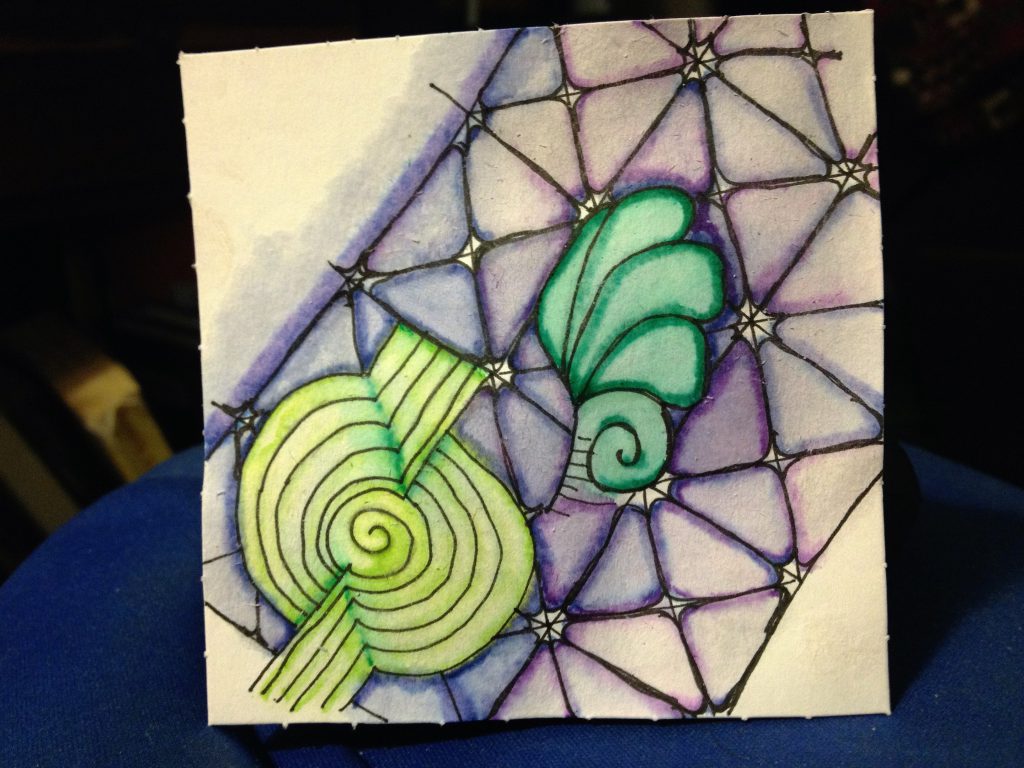 Then I looked back at the directions and saw the white highlights, so I added a some of those too. 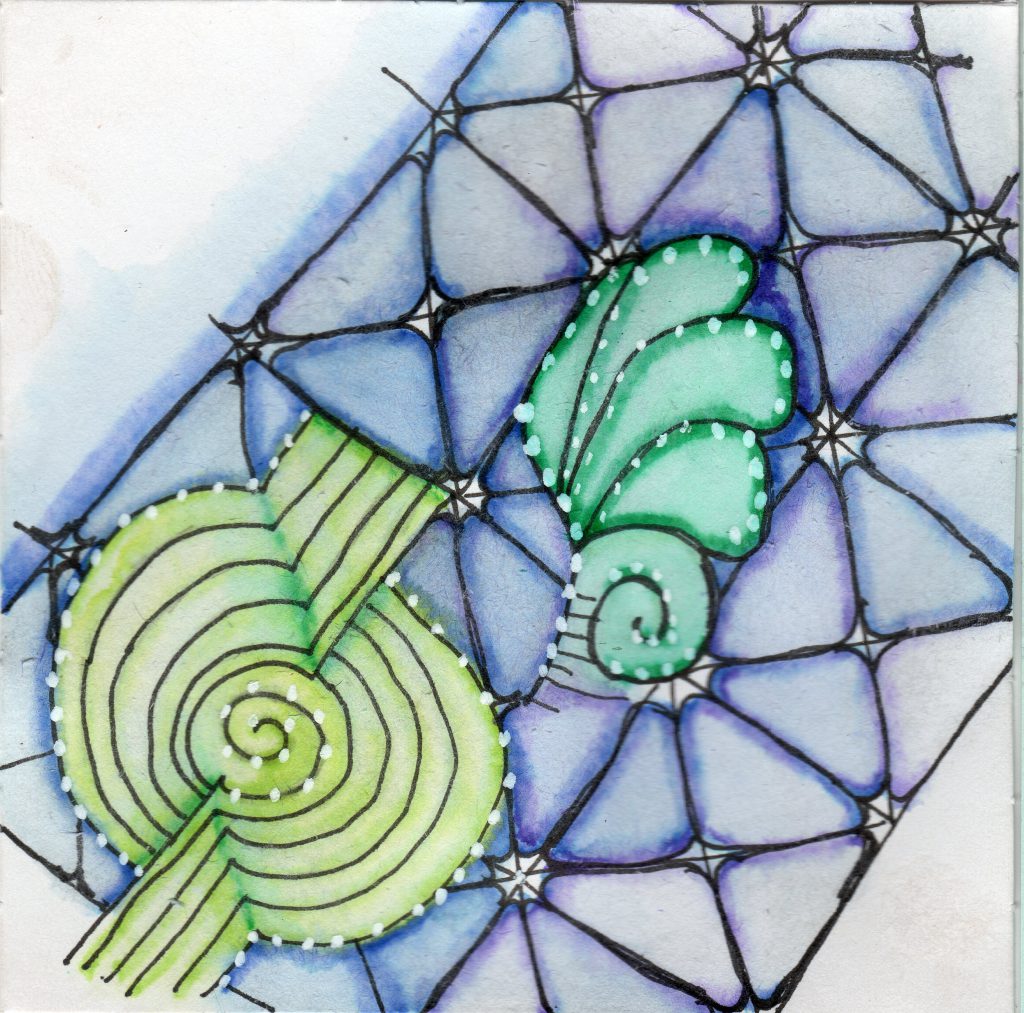 I may work on this some more later but I have to run for now.

I'd really appreciate any tips you have for working with these markers. Thanks for stopping by!