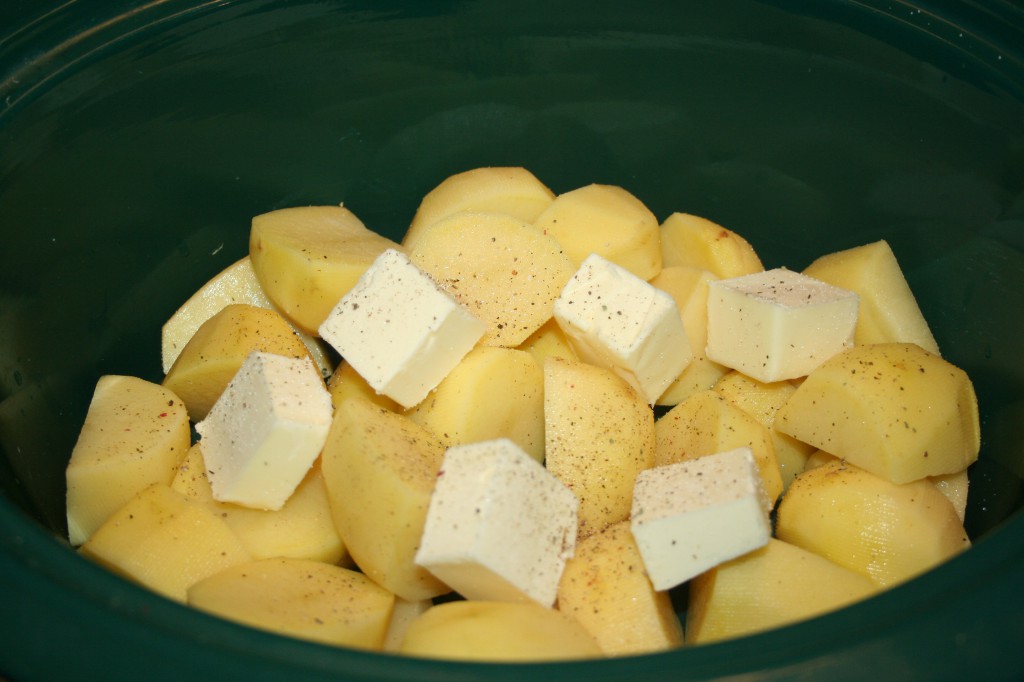 One Sunday I put Sticky Chicken in the oven before church. I have a gas oven and we are gone about 5 hours on a Sunday, so anything I put in the oven has to be slow roasted. I wanted a side dish with it and had seen this recipe online. It turned out great with the few modifications I made.

I was just going to share the link to the recipe and my alterations but unfortunately I cannot find it. So I’ll share the recipe here for you to enjoy.

The first time I made this, I left the peelings on, since that is how the recipe directed but I don’t like peelings in my mashed potatoes, no matter how thin the skin. So, the next time I 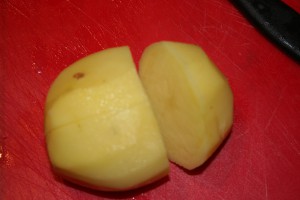 made them I peeled the potatoes and I enjoyed them even more. Since I was going to be gone for 5 hours or so, I cut my potatoes into larger chunks than the original recipe called for. I cut them into approximately 1″-2″ chunks. (The smaller potatoes were cut into quarters and larger ones into about 6-8 pieces depending on the size of the potato.)

It’s really quite simple. Peel and cut five pounds of gold potatoes and put into crock pot. Add one cup of water and one cup of butter (2 sticks) cut into chunks. Add salt and pepper to taste or recipe called for 1 Tablespoon salt and 3/4 teaspoon pepper. Cover and cook. The recipe said to cook on high for 4 hours but I cooked mine on low (for the 5+ hours I was gone), in my six quart crock pot, to ensure they didn’t get overcooked or worse, burnt.

The recipe recommended heating 1 1/3 cups of milk so that as you add it to the cooked potatoes, which you do NOT drain, it doesn’t cool it off. Add the milk gradually, as needed, as you mash the potatoes either with a mixer or masher, until desired creaminess. I prefer to use evaporated canned milk instead of regular milk. 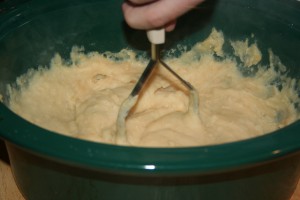 The recipe said that the mashed potatoes can be kept warm on low for a couple of hours without changing consistency, just keep the lid on the crock pot.

I hope you find this recipe helpful during this busy season.