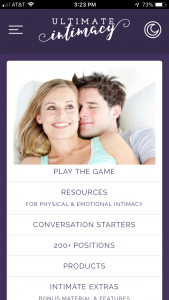 I try to limit my phone and computer use as much as possible but it is getting harder and harder these days. We just switched library systems and the one we will be frequenting is in the opposite direction of where we usually go, so it isn’t as convenient as the old library was. So we are also using electronic books. Of course that means using my phone or Kindle paperwhite, which is fine but just using electronics again.

Well, I recently heard about this couples app called Ultimate Intimacy. It was recommended by a Christian marriage blogger, so I decided to check it out. I went to the app store and searched for it but while I was there I saw a 5 Love Languages app too. So of course, I downloaded both free apps.

I haven’t looked at the first one very much yet so I cannot say much of anything about it. However, since I was already familiar with the 5 Love Languages called Love Nudge, I opened that one right up. Of course you can take the quiz to find your love language. I sent the invitation code to Michael and helped him get it onto his phone.

He took the quiz and low and behold, his lowest love language is touch and guess what my highest love language is . . . yep, touch! His highest right now is gifts and I don’t have much money! LOL At least I was creative for Valentine’s Day and he got a gift of several gifts.

I don’t know if we will use the apps. We tried the Dating Divas texts for him and her but those didn’t work too well. They just weren’t right for us. We both gave it a shot but in the end, didn’t do much with it. So, we will see how these turn out.