If you or a family member is a writer, you may know of or have heard about NaNoWriMo (National Novel Writing Month) which takes place in the month of November, and I’ve written about here.

In April and July, they hold Camp NaNoWriMo. Where instead of a 50,000+ word goal, you set your own custom goal. It can be editing chapters, writing a word goal, writing or editing a certain amount of time or whatever you choose–a very personal goal. In camp NaNoWriMo, you are placed into a virtual cabin where you are surrounded by 10+ writers. They have forums on their website too (although Tiffany never felt it to be a safe place and stayed away from there). All of this is an encouraging place for writers to “mingle and mix and be” and actually write or work on their writing.

This along with NaNoWriMo pushing their liberal views and political agendas, this was all that many conservative Christians could take. Consequently, there are many groups being formed as an alternative. One such group is The King’s Daughters’ Writing Camp.  It is hosted on the app Slack, an instant messenger app. 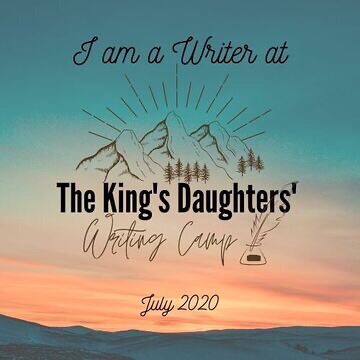 It doesn’t even really kick off until July and already 20+ people have signed up and are  already engaging with one another providing encouragement and feedback. Some people have brainstormed with others working through story blocks and other such situations. They’ve done many writing sprints and are getting to know one another both in their own tents and group members at large.

If you or your daughters are interested in joining send an email to: kingsdaughterswritingcamp@gmail.com . You will have to have a slack account to participate but it is free too.

She also said she could continue talking about the virtues of this group for a very long time but decided to cut it shorter for me.

She did want me to mention that the conversations are not limited to writing.

She’s only been involved for a day and has been so encouraged and progressing in her works in progress already.

Seriously, this is for all age writers! Okay, maybe not ALL ages . . . but you know, it would probably be a very rare instance for a very young child to want to/be able to participate.

And if you are a ‘more mature’ woman, you are welcome too.

I’m so excited to see how encouraged Tiffany is already!

She did say that there are quite a few homeschoolers and homeschool graduates participating too, which is nice for us also.

Summer is a great time to encourage children to write. It keeps up their skills and keeps them busy.