We went down to Edmond last weekend to celebrate Brian’s birthday. (He’s our oldest son.) We had reserved a car with Enterprise and Michael even mentioned the car being in Sapulpa when they called to confirm the rental the night before we were to pick it up. So we left early in the morning, dropped Tiffany’s dog off at my parents’ house because they were kind enough to agree to watch her overnight, and headed to Sapulpa to get the rental car. We got there and there were only two cars in the lot and it looked like the doors were locked.

Michael called and was told that the car was thirty minutes away! Yes, thirty minutes in the wrong direction!!! We opted to save the time and money and just drive our car instead. Our old car did just fine.

After a bit, we had to make a pit stop and I was HUNGRY. We were planning to go eat at a favorite restaurant of Brian’s for lunch when we arrived, but we’d had a light breakfast, so we picked up something to stave off our hunger. Then we got back in the car and headed out–we were there within like twenty minutes.

It was another forty-five minutes or so before we ate, so no big deal.

We ate at Thai Delight. I’ve never eaten Thai food before so I asked him what he suggested. Pad See-Ew. 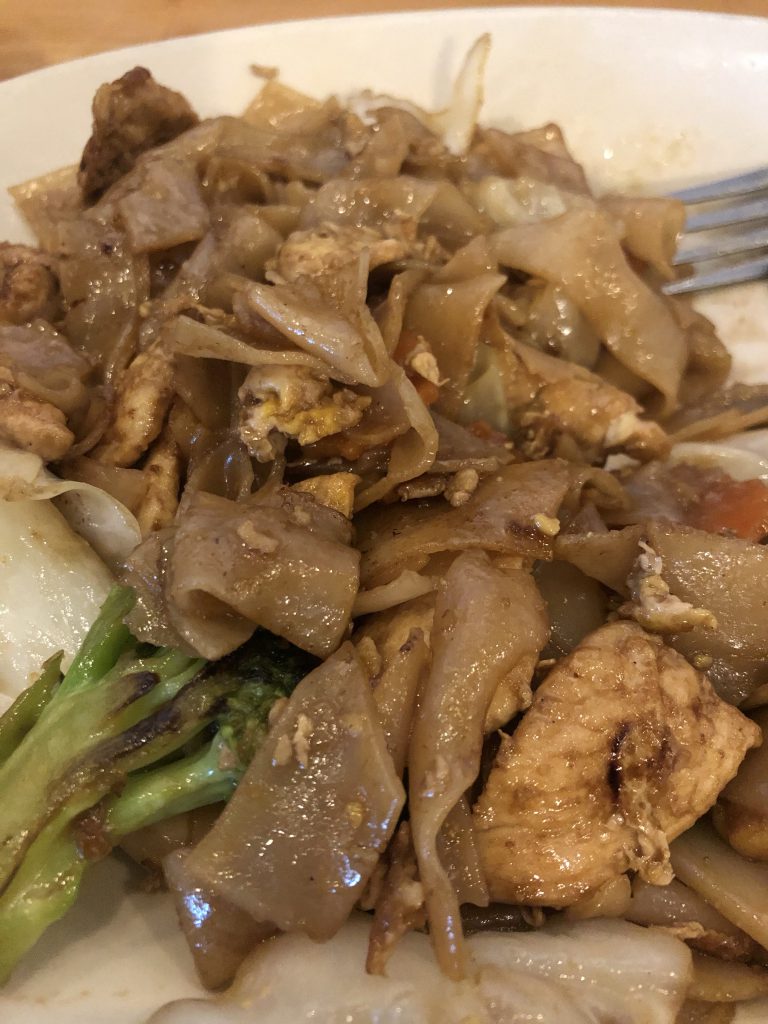 So basically this is chicken, vegetables, egg, and egg noodles. It was delicious!!! Even though it was definitely NOT on my THM eating plan, I would get it again.

Sean got a tempura combo meal with lots of stuff to try.

Fried carrot and fried mushrooms were among the other batter fried items. 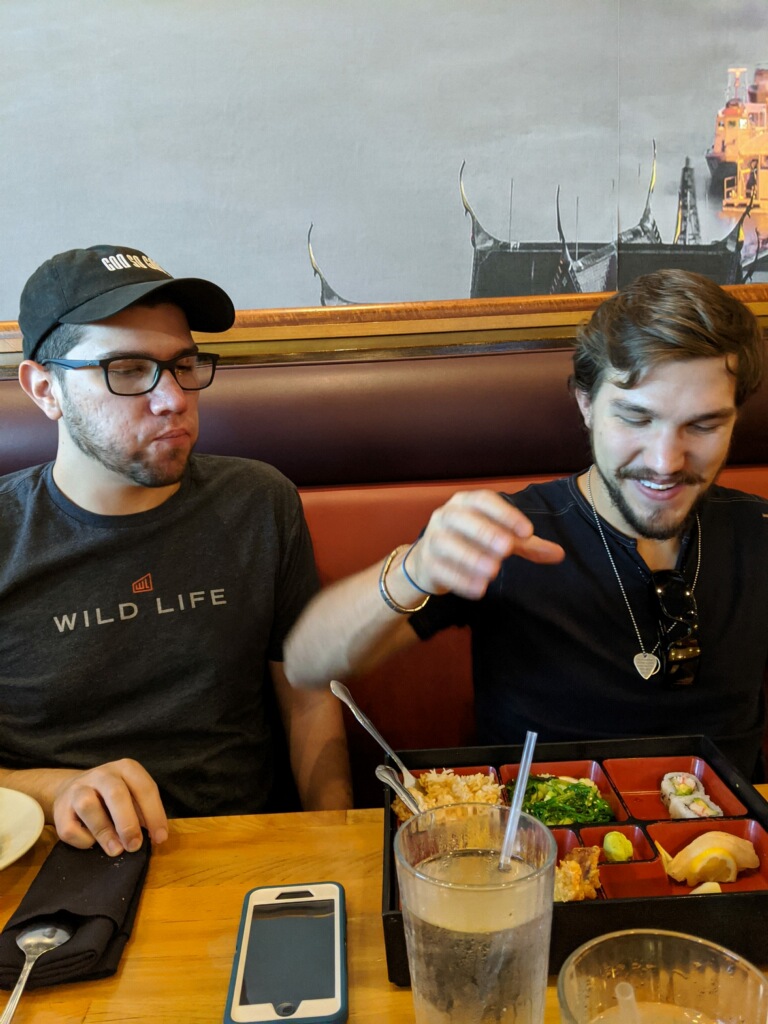 Unfortunately I caught Brian trying some of Sean’s bounty, so it’s not a very flattering photo of the birthday boy.

We left there and Brian took us for a tour of where he works, Life Church. He loves his job and it seems like a really great place to work. 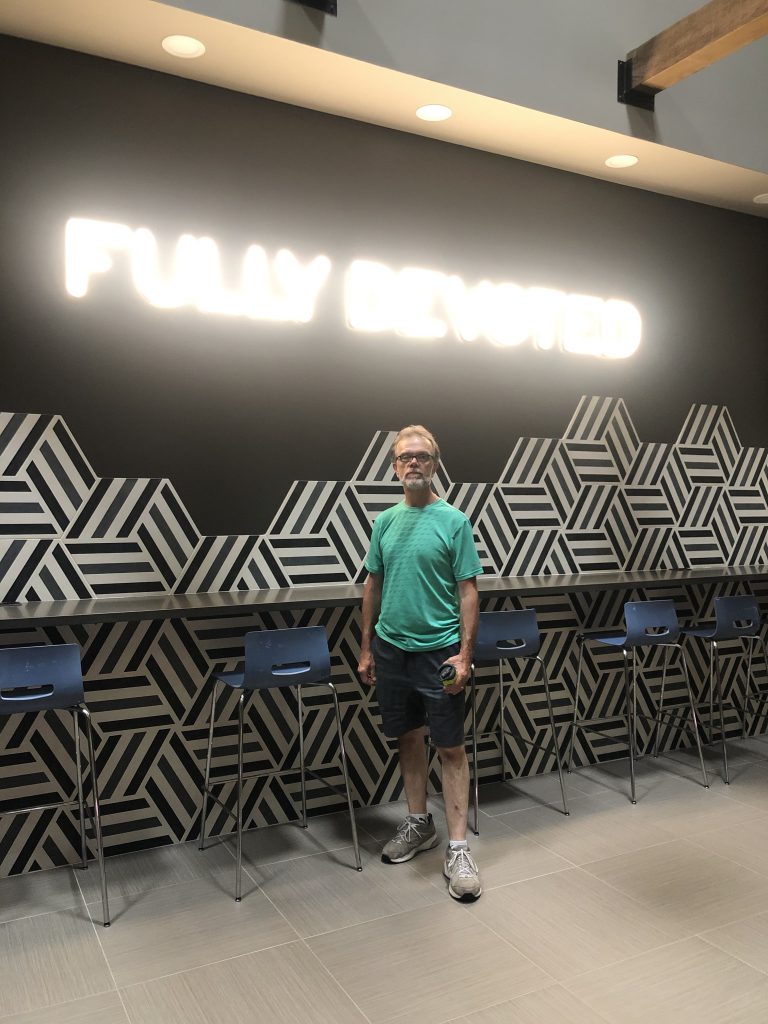 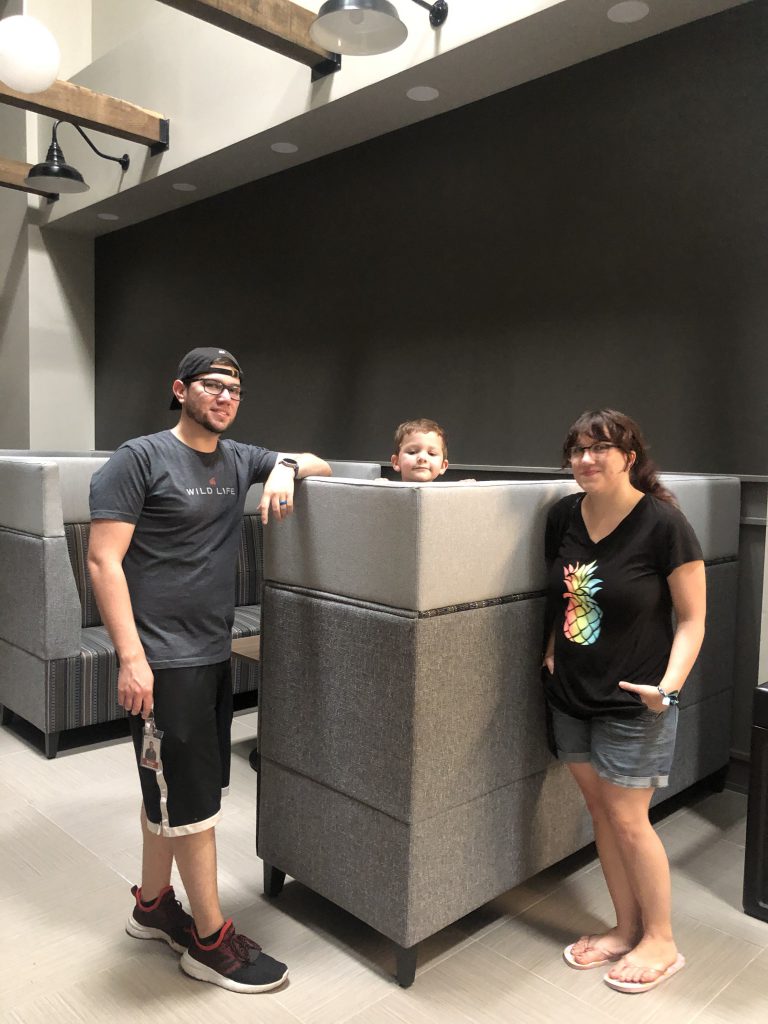 Yeah, I have a real talent for catching people not looking their best.

Sorry about that family!

They have a lot of cool signs posted around the offices and church. This is one I liked. 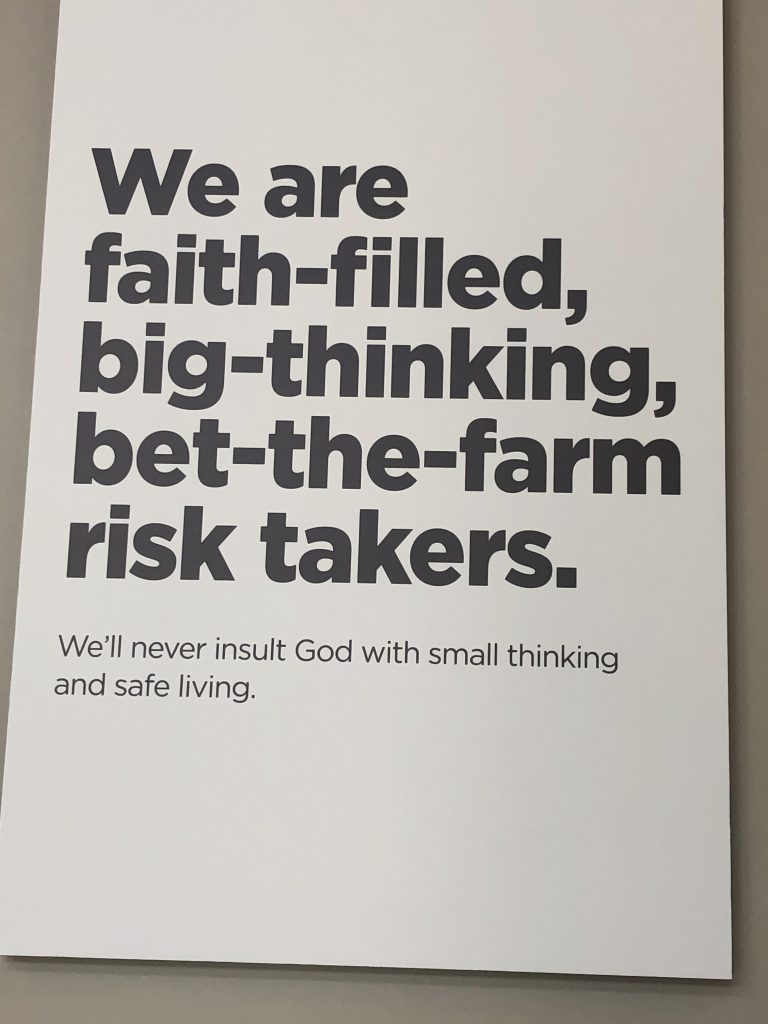 We were headed back to Brian and Lauren’s place for a bit until we could check into our hotel and head to our next adventure when we decided to stop and experience Boba Tea. Once again, this is not something I had tried before and there were soooo many choices that I asked for Brian’s recommendation. I went with the Mango, Boba, 50% sugar (again not on THM plan

). It was quite good but I think I’ll skip the boba next time unless I can get like 25% boba. 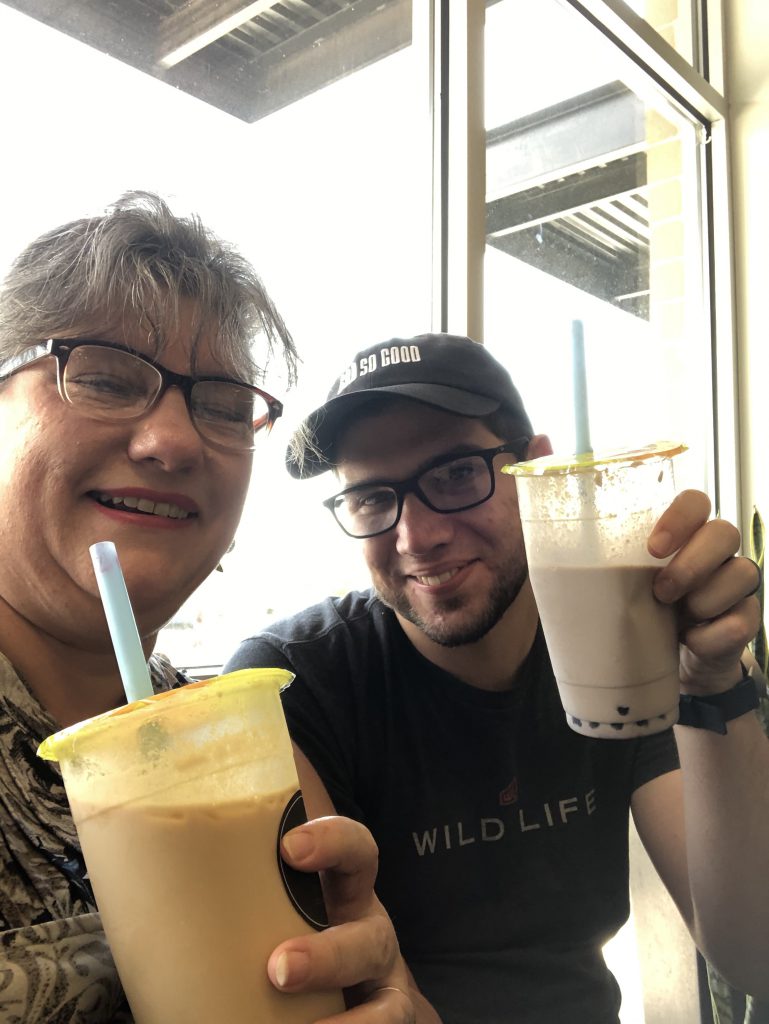 Then we were going to head back to their place and Lauren pointed out the $5 Below store. From the things she tells me she can find in hers, I wanted to check it out, even though we have one in our area now too.

Sean and Liam both got sunglasses while we were there. 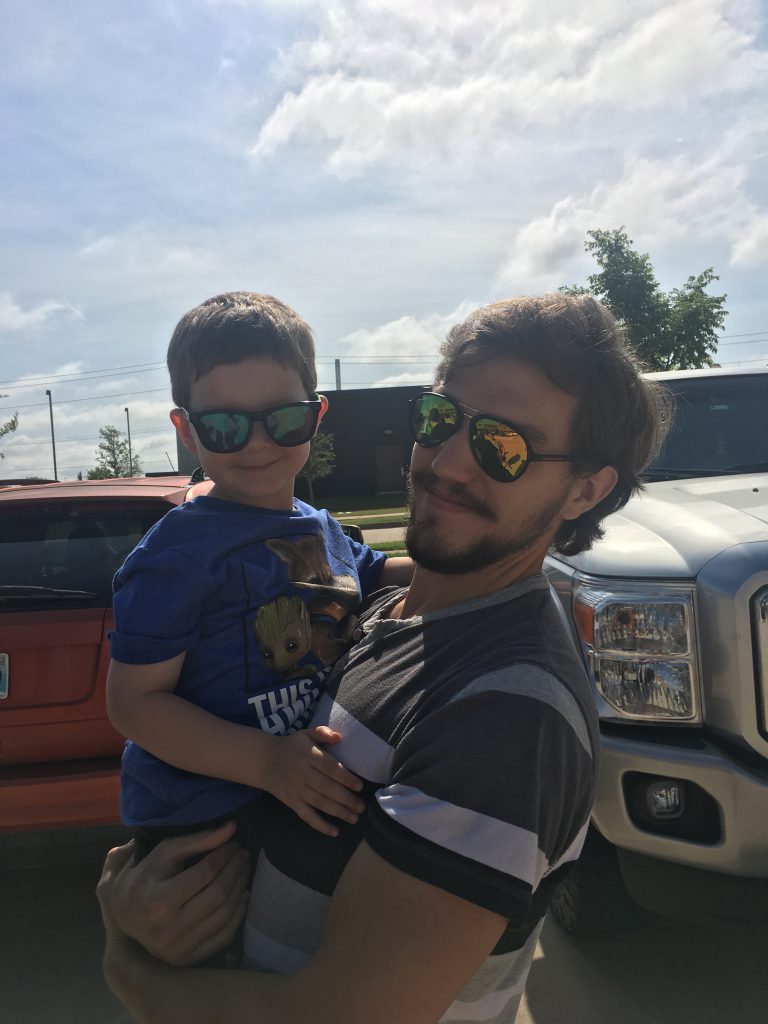 Liam’s were Minecraft! That boy loves anything Minecraft.

This is getting long, so I’ll share the rest of our trip next week.

I think we are finally going to get to that waterpark this weekend, so it looks like I’ll have content for the next two Fridays, IF I remember to take some pictures.

Well, I hope you have a good weekend too.

PS. This is an adorable decoration that was in the ladies’ restroom of Thai Delight. 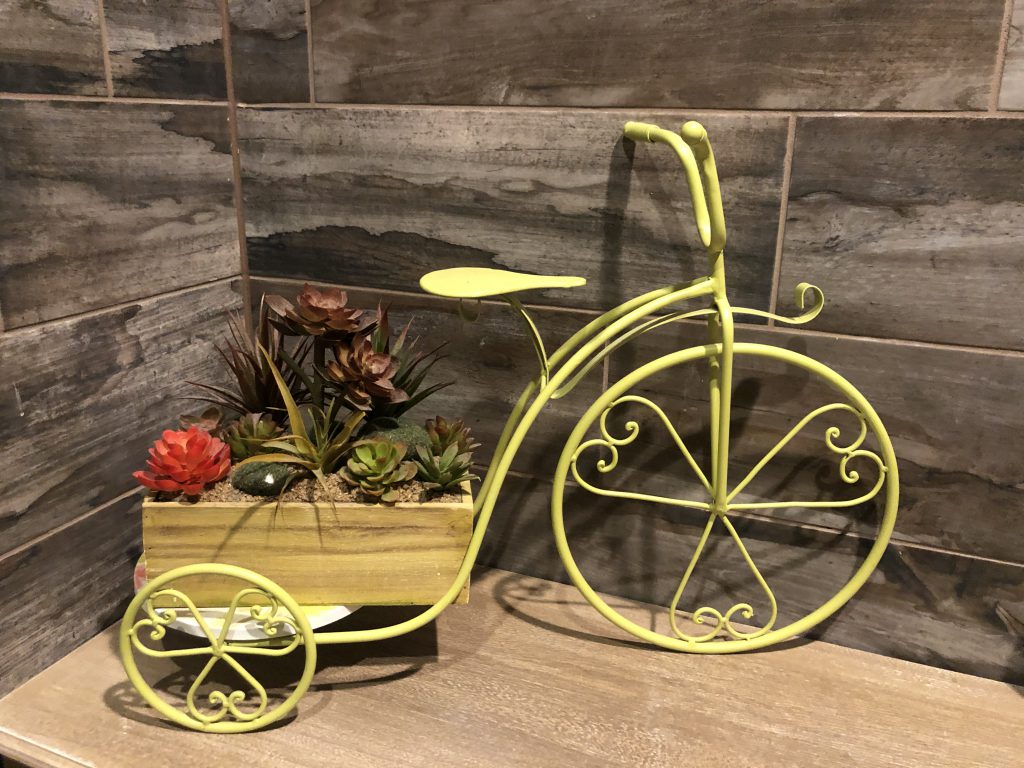 It was so cute and so clean!