For many years, for our Christmas Eve breakfast I have made Overnight Custard French Toast. I thought all the kids liked it but found out only this December that Tiffany doesn’t really care for it. I never knew!

A couple of years ago I decided to try an overnight crockpot breakfast casserole. I did not like it because it was too dry for my liking. So last year I went back to my old faithful standby. I found out that Lauren did not care for the overnight French toast, so I decided to try something else this year.

I have made Breakfast Burrito Bake several times in the past and thought this would be a good candidate for our Christmas Eve morning breakfast. The first time I made this I made it with the suggested can of enchilada sauce but we did not care for it that way. The place I got the recipe from suggested that a cream of chicken or cream of mushroom soup could be substituted. This is the way we prefer it.

Unfortunately this has not been tested as an overnight recipe and I did not want to risk messing it up, so I had to make it fresh Christmas eve morning. Of course, as an insurance that everyone would have something they liked for breakfast, we decided to have Bubble Bread or Monkey Bread as well. This too has not been tested as an overnight dish and thus needed to be made fresh that morning. Fortunately my kids are helpful. Tiffany and Lauren weren’t feeling up to par but the boys were fine, so they made the Bubble Bread. We decided to make it in muffin cups instead of a bundt pan so that it got done faster.

Unfortunately I’m still a newb at all this blogging stuff and keep failing to take pictures as we are preparing food and before we make a mess of it all. 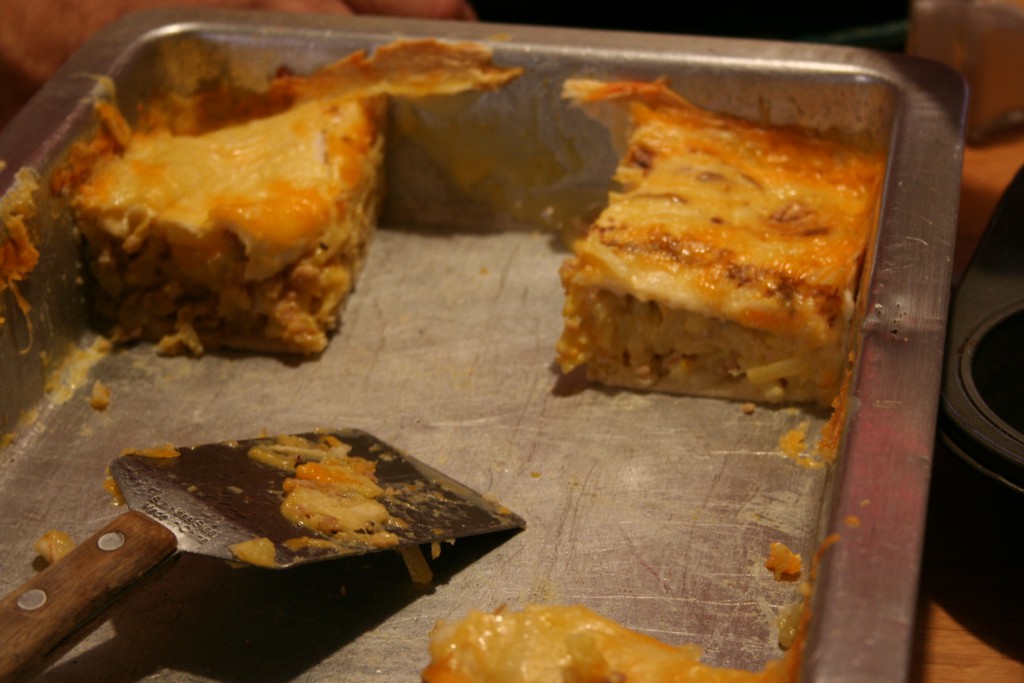 I precooked the sausage with onion powder the night before to try and speed up the process in the morning. I also shredded the cheese and had it in the refrigerator ready to go the next morning.

In the morning I simply combined the sausage and hashbrowns and then added in the beaten eggs.

I sprayed the 9×13 pan with oil spray and put down a layer of tortillas, followed by half the sausage/hashbrown mixture, and then a cup of shredded cheese. Then repeated the layers. Afterwards another layer of tortillas.

Next I combined a can of cream of chicken soup with 3/4 cup of milk. Poured it on top of the tortillas and finally the last cup of cheese.

I can only hope that as our family grows (by my other kids getting married and then grandchildren coming along) that they will love it too because this is our new Christmas Eve morning tradition.