This time last week was a very busy time for us as a family. We were celebrating Mike’s birthday and then leaving on a family vacation. I finally got to go on a cruise!

When Brian was thinking about where to go on his and Lauren’s honeymoon, I told him I had dreamed of going on a cruise to the Virgin Islands for my honeymoon. I don’t know if that is if that is the first he’d thought about it or not but he and Lauren went on a cruise to Cozumel and Progreso for their honeymoon. They loved it!!! They came back and told our extended family all about it. My parents went on a cruise with my baby sister and her family, not too long after that, although I don’t remember where they went. It wasn’t my parents’ first cruise, as they had been on the QE2 with my dad’s work and to Hawaii on a cruise as well. But they all came back singing the praises of cruising too.

I was content. Don’t get me wrong, I’d love to go on a cruise as well, but it was no yearning. Brian and Lauren decided a year ago, or more, that they wanted the six of us to go on a family vacation cruise together and began saving money and making plans to go. They told us about it and I was happy but didn’t want to put any pressure on them and would understand if things didn’t work out.

As the time got closer to when they wanted to go, they were serious about booking the cruise and had saved enough for interior rooms on a 5-day cruise. Sean decided to add some money to the budget so that we could do a 7-day cruise. So it was booked! October 17-24 were our cruise dates. 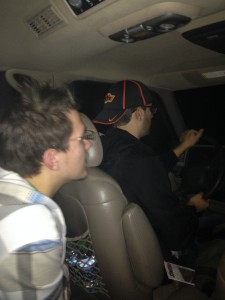 Friday night, after celebrating Mike’s birthday, we all got in Brian and Lauren’s suburban and headed to Galveston, Texas. We left around 10:30 or so and arrived before sunrise. We couldn’t board until at least ten o’clock, so we had some time to kill. We found an IHop and got some breakfast, even though Tiffany had made pumpkin donuts for us to eat.

We drove around, waiting in a nearby Starbucks parking lot, and then saw people boarding, so we headed over as well. We dropped off our luggage with someone to take it aboard and were left with our carry-on bags. I had my computer in my bag and it was heavy. Being the wonderful gentleman that he is, Mike carried mine for me most of the time.

We got checked in and sat, waiting to board the Carnival Freedom cruise ship. We were there early enough that we didn’t have to wait real long. While we waited there was a bridal party that boarded before us — I cannot imagine getting married on a cruise ship and then having guests and/or family members traveling with me on my honeymoon . . . that seems peculiar to me . . . but to each his own. 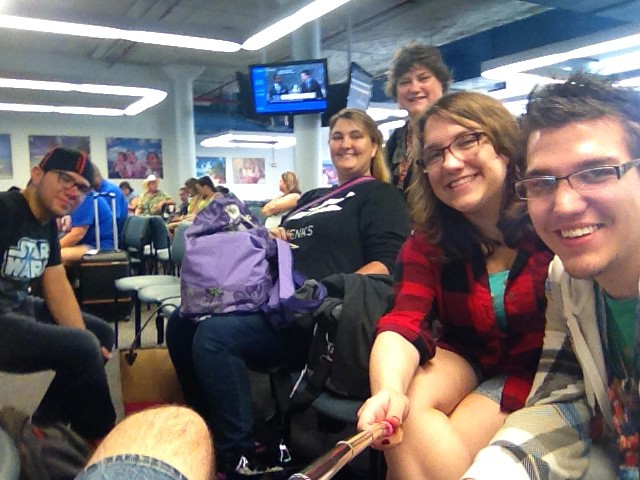 Tiff used Lauren’s selfie stick but Mike was sitting in the wrong place, all we got of him was his left knee.

This is getting a bit long so I’ll share more about the cruise next week. I am very thankful that the kids decided to take us on a cruise with them! It was a good time and now Mike even likes cruising! We got home and he started looking on youtube for more cruises, to see the best ones and such. I’m glad! We now have another kind of vacation to take AND this one doesn’t have me cooking, cleaning, or washing a single dish the entire time!!! Whoo hoo! (Don’t get me wrong, I like cooking but it is just nice to get a complete vacation.)

On a Different Note:

We invited my parents over for dinner last night. For a while I couldn’t figure out why we hadn’t done that before, well besides the one other time this year (or was that last year?). Any way, I realized it was because we have gone to my parents’ house most every Sunday since we got married (28 years ago) until the last several years. We’ve been in a state of flux recently and now generally go over every 2-3 weeks. With longer periods of time in between visits, it seemed logical to invite them to dinner, to fellowship together.

I made Gumbo and homemade artisan bread for dinner and Hot Fudge Pudding Cake for dessert, which I forgot to take pictures of, yet again, in order to share it with you. Oh well, maybe next time.

Fortunately we did get pictures of the Gumbo, so I’ll probably be sharing that next week.

We played a little “Last Man Standing” and just enjoyed being together for a bit. It was nice and I look forward to doing it again but it probably won’t happen again until after the first of the year because things get sooo busy and hectic throughout the holidays.

1 thought on “Blessed with a Cruise and Dinner with Family”