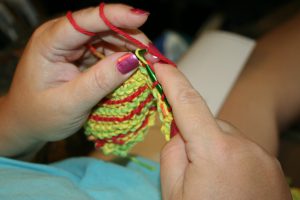 Shortly after Mike and I got married I realized that I was going to have to find some activities to do in the evening, if we were going to make it. You see, Mike is a television channel surfer, whereas I find something and leave it. Mike dislikes commercials; thus every time a commercial would come on, he’d flick the channel.

The reason this was a problem for me is because just about the time I got interested in whatever he had flicked to, there would be a commercial on that channel and he’d flick channels again. After about half an hour, give or take, we’d end up back on the first show, having missed a lot. This would greatly frustrate me!

I decided to do other things while we watched television: crochet, read a book, do word puzzles, or play a game. This helped me immensely! I didn’t have to like what he put on the television, any longer. I could immerse myself in something else whilst still being in the same room with him and enjoying being close to him.

Since my dad worked late, she didn’t have to battle channel flicking though; I guess she just liked to be doing something with her hands while sitting still . . . but I digress.

By having another activity going, I wasn’t as annoyed when Mike would change the channel and I’d miss part of the show I had gotten interested in. It is something that has helped sustain me through the last twenty-nine years.

Now days, Mike multi-tasks in the evenings as much as I do. Actually, Sean and Tiffany do as well. The important thing is we have found a way to enjoy each other’s company, share experiences, and not be bored, frustrated, or otherwise want to leave the room.

I think it is healthy to keep busy while resting in the evening, as long as it is something pleasurable and not work. When it is work, it detracts from the rest and enjoyment of being with those you love.

So, I guess what it boils down to is this, if your spouse does something that annoys you, try to find something YOU can do, that will lessen the frustration and keep you from having an area of contention over something little.