You all are probably pretty tired of me saying that we helped out in the kitchen serving the young adults at their conference this week but I believe I might have a different audience each day, so I feel the need to say it each day.

Yesterday was our busiest day because I made Enchilada Pie for the fifty attendees and volunteers. We even prepped it the day before by making the sauce before we left on Wednesday. It was great though.

I also made the corn salad I shared this week. They seemed to enjoy it. I did realize though, since I followed the directions to the letter, that I don’t like that much lemon juice in the dressing and had to add some sugar to even it out. So, I’ll have to go back and update the recipe.

I also made fresh sweet tea which seemed to go over well also. I think the ‘floats’ and ‘sundaes’ will be enjoyed today.

(As you might be able to guess, I did not get any pictures taken of the conference; I was a bit busy.

Last night Sean and Tiffany had two of the young ladies over for the evening and to spend the night. We shared dinner with them and an old favorite movie. Mike and I went to bed before they did, of course.

They made some popcorn, which I encouraged before going to bed. Funny thing is that Mike woke up because he smelled it, only he thought it smelled like cheese.

It told him it was popcorn and we went back to sleep.

Shortly thereafter we awoke to a thunder storm. I think it was around 1:30 a.m. Tiffany said they went to bed soon after that.

Then yesterday while at the conference a bad storm passed through with torrential rains! The tornado sirens went off. (Living way out in the country I have forgotten what it was like to have the sirens go off but just kept on working.

) Many of these young people had not been exposed to things like this before and stood at the doors looking out for a bit while it poured!!!

On our way home we saw MANY tree limbs downed. In many places, only one lane was usable. We were counting ourselves pretty blessed as we were able to make around them . . . until . . . we got within a mile of our home. That’s when we had to find another route, as there was a large tree across the entire road.

So we backtracked and went around another way and were please when there were no trees or branches blocking our path. Unfortunately, we did have some activity on our property. First, the trash can was knocked over and trash spilled out. Odds are a local animal helped the trash situation.

Then I saw the shingles in the yard. I looked up at the roof and didn’t see anything amuck. Then I saw more shingles and a couple of skirting pieces. This cause me a bit of concern.

I proceeded to walk around the side of the house where at first all looked normal but then I saw the messed up area. I walked around the back and saw this:

The back had a bit more mess but it really wasn’t that bad. We just had straighten and re-align the pieces and set the grill back upright.

I guess the most annoying thing was the electricity being out. Thankfully there was a breeze and the sun was mostly hiding behind the clouds, at least most of the time. But working outside still made us sweat.

But thankful once again that the electricity came back on before too long and we were able to take proper showers. 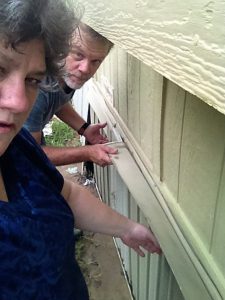 Well, gotta run. It’s the last day of the conference and then I have a mound of laundry to do this weekend!

I hope you have a good one.